Robert Taylor was placed at the bar, charged with obtaining money under false pretences … The Honourable the Judge Advocate remarked, with much energy, upon the extraordinary effrontery with which the fraud had been effected, under circumstances from which it was impossible the prisoner could have escaped justice; and upon a very short consultation of the Members, the prisoner was pronounced guilty; and sentenced to be transported—for seven years to Newcastle.

You may be forgiven if you are experiencing a sense of déjà vu on reading the above extract from the Sydney Gazette. Robert Atcherley Taylor [

] had been given a seven year sentence of transportation at Middlesex, for a fraud, in September 1811. Now, in September 1818, with less than a week of his sentence left to run, a second fraud had condemned him to an identical sentence within the colony which he had hoped to leave.

It was for the purpose of securing help with his plans to return to England that Robert had been given permission to travel from Van Diemen’s Land to Sydney. He would have been eligible to apply for his Certificate of Freedom once his original sentence had expired, but that chance of liberty was now gone.

The victims of Robert’s latest swindle were “Mr. C. Hadley, of the Nepean” (Charles Hadley, a pardoned convict from the Third Fleet who had settled at the Nepean River) and his agent Thomas Rose, of Castlereagh Street in Sydney. The Sydney Gazette gives the details (quoted here with a few minor amendments):

The prisoner had arrived lately from Hobart Town, in the Henrietta Packet; and, with a counterfeit letter pretended to be sent to Mr. Hadley from a relative at Hobart Town, imposed on him an account of property arriving by the Jupiter, the freight whereof, stated to be £8 10s. the prisoner at the bar was to receive from Hadley on his arrival.

No suspicion was entertained of the fraud, and Hadley gave the prisoner a letter requesting Mr. Rose, as his Agent, to make such advances as he the prisoner might want during his stay in Sydney, not at all doubting the truth of his representations. Mr. Rose advanced him altogether the sum of £8; but there stopped, owing to some incidents which had rendered the prisoner suspected; whereupon a development ensued, and all was found to be a fabrication; the letter a cheat, and not a single article for Hadley by the Jupiter. 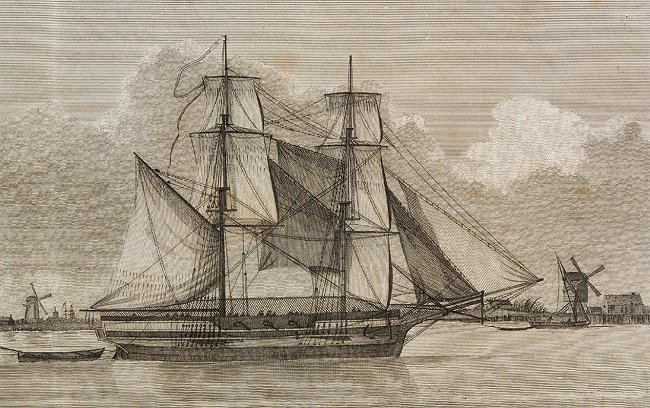 And so it was that a “List of Prisoners to be Sent to Newcastle Per the Lady Nelson” on 19 October 1818 included Robert Taylor of the Indefatigable, convicted at the Criminal Court on 15 September that year.

Newcastle penal colony has been described as “a nasty place” where “military rule was harsh, often barbarous”. Prisoners were forced to work in the coal mines, but the “there was no more notorious place of punishment in the whole of Australia than Limeburners’ Bay … where incorrigibles were sent to burn oyster shells for making lime.” Fortunately for Robert, conditions had improved somewhat in the three years up to 1818 under the settlement’s Commandant during that period, Captain James Wallis. But even with those improvements, life for the convicts at Newcastle was no picnic.

There appears to be little on record in respect of Robert’s time at Newcastle – but what there is shows that he was still capable of mischief, and that the punishment for such behaviour was brutal. A “List of Prisoners punished at Newcastle with Nature of Offence” for the month of March 1821 includes Robert Taylor of “1st Indefatigable”. For “Disobedience of orders in going to the Settlers, repeatedly leaving his Gang & forging a Pass to deceive the Constable at Patterson’s Plains” he received 50 lashes. The same punishment had been inflicted upon many of the other men on the same list, while others had received either 25 or 75 lashes. All must have suffered terribly.

Fortunately for Robert, by 1821 Newcastle’s days as a penal colony were numbered: Governor Macquarie felt that it was situated too close to Sydney for comfort, and the land was ripe for development by settlers. Military rule at Newcastle ended In 1823, by which time only 100 convicts remained. Robert Taylor of the Indefatigable was one of the 900 prisoners who were transferred to the penal colony at Port Macquarie, where he appears on a convict muster taken in 1822.

Robert had in fact been moved to Port Macquarie in 1821. The evidence for this takes the form of a testimonial written by another man who arrived at that penal colony in the same year. Captain Francis Allman of the 48th Regiment was Commandant at Port Macquarie from 1 March 1821. From Allman’s testimonial it can be seen that Robert’s fortunes changed for the better after his transfer. No longer compelled to undertake hard manual labour, Robert was instead given the job of schoolmaster, a duty he performed in a manner which impressed:

This is to Certify that the Bearer Robert Taylor was appointed by me Master of the Government School at Port Macquarie at its first formation in the year 1821, and continued in that station up to the period of my leaving the Settlement in April 1824, and from the circumstance of my having minutely examined the School on the first Friday in every Month I Consider it a Point of Justice to Represent that the progress made by the Children far exceeded my most sanguine expectations together with the Discipline : and which did not pass unnoticed by the Colonial Secretary, and I further Certify that my Instructions relative to their being Brought up In Bells System of Education in Strict Uniformity to the Principles and Tenets of the Church of England were faithfully discharged by him.

In 1824 Robert evidently decided that his sustained and widely recognised period of good conduct provided grounds for the mitigation of his sentence. In April that year he petitioned the Captain General Governor of New South Wales, Sir Thomas Brisbane (pictured below). His petition was backed up by short testimonials from William Clayton (a Sergeant in the 48th Regiment), William Hudson (a Colour Sergeant in that regiment), George Muir (wharfinger), William Wilson (overseer), John Hillis (position unspecified), John Hawkins (overseer of stock), and Stephen Partridge (Superintendent at Port Macquarie). Robert’s petition took the following form: 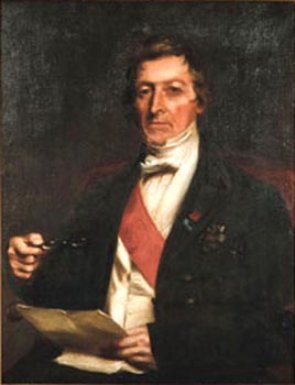 The Humble Petition of
Robert A. Taylor a
Prisoner to the Crown,
and Government School
Master at Port Macquarie
Most Humbly and Respectfully Sheweth
That your Excellencys Petitioner with many other deluded votaries in the Colony hath hitherto sought for happiness in following the deceitful paths of Sin, which of course brought on him the sentence of seven Years Transportation at the Criminal Court held at Sydney in the year 1818.
That your Petitioner being with humble submission to the Offended Laws of his Country, presumes to hope that your Excellency will be pleased to blend the rigour of Justice with the feelings of humanity, by remitting the remainder of the Unexpired term of the said Colonial sentence, for which Indulgence Petitioner as in duty bound will ever Pray
Robert A Taylor

Uncertain whether his petition had been “deemed worthy of notice“, on 4 May 1824 Robert followed it up with a letter to Colonial Secretary Frederick Goulburn, in which he made the following plea:

Pardon me Honl. Sir in further stating That if you will in this instance extend your clemency So far As to allow me to Return to Head Quarters, and pass the Remainder of my Term independent of Govt, it will enable me to procure myself a little wearing apparel (of which I am now completely destitute), and ultimately forward in Views in proceeding to England, not to return to my evil propensities, but to make with an ancient patriarch this solemn enquiry, “Is my father still alive”, and If So to claim with the prodigal, in the Gospel His forgiveness, and that of the family, I have so mortally disgraced.

Robert’s hopes of early release were given a huge boost when he received a reply from the Colonial Secretary, dated 22 June 1824, which stated that: “Your Memorial of the 5th of April having been submitted to the Governor, I have been honored with this instruction, that the remainder of your Sentence may be remitted, if such remission accord with Colonial regulations.”

Encouraged, in fact “deeply impressed with Gratitude”, Robert wrote a further ‘Memorial’ in which he again requested his “removal to Head Quarters” (Sydney). But for some reason, progress then stalled and Robert did not, in the end, secure any remission of his sentence. A general muster taken in 1825 shows that Robert was still at Port Macquarie. The transcript of Francis Allman’s testimonial which appears above, although relating to the period from 1821 to 1824, was not in fact written until 13 September 1825. This was almost at the very end of Robert’s full – and unremitted – seven year sentence of transportation.

Finally, on 6 October 1825, Robert Taylor, schoolmaster, of the Indefatigable (1), originally convicted on 23 September 1811, and a native of Shropshire, was issued with his Certificate of Freedom. After 14 long years Robert Atcherley Taylor was at last a free man. But for how long would this remain the case?