] of the Royal Marines set off from the Conqueror to take possession of a stricken enemy vessel during the Battle of Trafalgar, he could not have anticipated what awaited him aboard that ship. Amidst harrowing scenes and death and destruction, he came face to face with the commander-in-chief of the combined Franco-Spanish fleet, Admiral Pierre Villeneuve. The vessel which had ‘struck her colours,’ surrendering to the Conqueror, was none other than the French Admiral’s flagship, the Bucentaure. 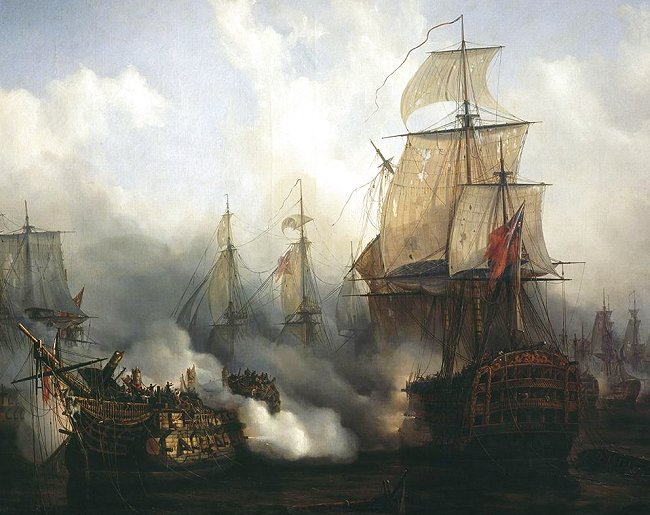 I have yet to find a record of James Atcherley’s birth or baptism, but based on his age when he died [1] it appears that he was born around 1775. He was the youngest son of the Reverend James Atcherley, head master of Shrewsbury School (see The Rev James Atcherley, Head Master of Shrewsbury – Part 1, and Part 2), and was likely born in Shropshire’s county town. Both of his older brothers, Roger and John, had followed in their father’s footsteps and taken holy orders [2]. James however chose a career in the Royal Marines.

James was appointed Second Lieutenant in 1794, and rose to the rank of First Lieutenant the following year (on 24 April 1795). He was present on the Hussar not long after this promotion and “distinguished himself in her action with four French ships, and the capture of La Raison and Prevoyante”. The capture of these French supply ships, which took place off the coast of North America in Chesapeake Bay, not only deprived France (with which Britain had been at war since 1793) of supplies, it also augmented the British Navy as both ships were purchased by the Government. [3, 4, 5]

Ten years later, James Atcherley was a married man with a young daughter. He was also promoted to the rank of Captain and on 6 April 1805 he joined the Conqueror [6]. By this time Britain and France were once again at war, after a brief respite which had ended in 1803. (See Wikipedia [7] for a more detailed account of the events of 1805, which I have summarised here). Under Napoleon Bonaparte, the military might of the First French Empire had given France domination of the European mainland and Napoleon had plans for an invasion of England. However, Britannia ruled the waves: the British Royal Navy controlled the seas and had imposed a naval blockade of France.

Napoleon’s strategy for beating Britain’s blockade involved the use of a combined fleet of French and Spanish ships under Admiral Villeneuve’s command. Villeneuve though, despite the exhortations of his Emperor, was reluctant to face the enemy. Many of the French and Spanish crew members under his command were inexperienced, and he was all too aware of the capabilities of Admiral Nelson and the British Navy. In August 1805, with Villeneuve’s ships holed up at Cádiz instead of fighting in the English Channel, Napoleon’s plans for invading England were abandoned. Finally, on 18 October 1805, after receiving word that he was to be replaced as commander of the fleet, Villeneuve ordered his ships to put to sea. Three days later on 21 October the British and Franco-Spanish forces would confront each other and engage in battle off Cape Trafalgar.

On that fateful day, Nelson’s fleet approached the straggling line of French and Spanish ships from the side in two columns, and cut that line in two. The French flagship was one of the unfortunate vessels to receive broadside after broadside from a succession of British ships as they streamed past. Victory was the first to open fire upon the Bucentaure and it was followed by others including Neptune, Leviathan and Conqueror. In all, according to a statement made later by Major-General de Contamine, the Bucentaure was fired into for nearly two hours and by a total of 11 British ships. The victim of this barrage was dismasted, leaving her not only dead in the water but also defenceless as her masts and sails had fallen across her gun batteries. Villeneuve had little choice but to surrender in order to prevent further loss of life. [7, 8, 9]

It was at this point that James Atcherley was sent to take possession. The following description of what happened is taken from The enemy at Trafalgar : an account of the battle from eye-witnesses’ narratives and letters and despatches from the French and Spanish fleets [9]:

At the moment of the Bucentaure’s submission, Captain Pellew, as it happened, was unable to spare Lieutenant Couch, his first lieutenant, to whom, in ordinary circumstances, the duty of boarding the prize would have fallen. Being unaware, owing to the absence of Villeneuve’s flag from the Bucentaure’s masthead, that the enemy’s Commander-in-Chief had surrendered to him, he told Captain James Atcherley, of the Conqueror’s marines, to go in the first lieutenant’s place and take possession of the vessel, whose name also, it would seem, they did not know. Captain Atcherley went off with two seamen and a corporal and two marines. He was pulled alongside and clambered on board the big two-decker, little dreaming whom he was going to meet, and the reception in store for him. This is what then took place.

As Atcherley gained the Bucentaure’s upper deck and the British officer’s red coat showed itself on the quarter-deck of the French flagship, four French officers of rank stepped forward, all bowing and presenting their swords. One was a tall, thin man of about forty-two, in a French admiral’s full dress. It was Villeneuve himself. The second was a French captain Captain Magendie, in command of the Bucentaure. The third was Flag-Captain Prigny, Villeneuve’s right-hand man. The fourth was a soldier, in the brilliant uniform somewhat begrimed by powder-smoke of a brigadier of the Grand Army, General de Contamine, the officer in charge of the four thousand troops serving on board the French Fleet that day.

“To whom,” asked Admiral Villeneuve, in good English, “have I the honour of surrendering?”

“To Captain Pellew of the Conqueror.”

“I am glad to have struck to the fortunate Sir Edward Pellew.”

“It is his brother, sir,” said Captain Atcherley.

“His brother! What! Are there two of them? Helas!”

“Fortune de la guerre,” said Captain Magendie with a shrug of his wide shoulders as he became a prisoner of war to the British Navy for the third time in his life. Prigny and de Contamine said nothing, as far as we know.

Captain Atcherley politely suggested that the swords of such high officers had better be handed to an officer of superior rank to himself, to Captain Pellew. He then went below to secure the magazines, passing between decks amid an awful scene of carnage and destruction. “The dead, thrown back as they fell, lay along the middle of the decks in heaps, and the shot, passing through these, had frightfully mangled the bodies. . . . More than four hundred had been killed and wounded, of whom an extraordinary proportion had lost their heads. A raking shot, which entered in the lower deck, had glanced along the beams and through the thickest of the people, and a French officer declared that this shot alone had killed or disabled nearly forty men.”

Atcherley locked up the magazines and put the keys in his pocket, posted his two marines as sentries at the doors of the admiral’s and flag-captain’s cabins, and then, returning on deck, he conducted Villeneuve, Magendie, and Flag-Captain Prigny down the side into his little boat, which rowed off in search of the Conqueror. That ship, however, had ranged ahead to engage another enemy, and as her whereabouts could not be discovered in the smoke, the prisoners were temporarily placed on board the nearest British ship, which happened to be the Mars. There Admiral Villeneuve’s sword was received by Lieutenant Hennah, the senior surviving officer of the ship (the gallant captain of the Mars, George Duff, had fallen a short time before), who sent it after the battle to Collingwood.

The Battle of Trafalgar was of course the final chapter in the story of Admiral Horatio Nelson, the architect of Britain’s victory. While Admiral Pierre Villeneuve survived the battle with minor wounds, his story too was drawing to a close. After he was released by the British in 1806 he returned to France, but was later found dead in the room of an inn (where he had stopped en route to Paris) with six stab wounds to his chest. It was concluded that he had committed suicide. [7]

Captain James Atcherley was also wounded during the battle and he too survived, receiving £50 from Lloyds Patriotic Fund for his injuries. He also benefited from Prize Money of £65 11s 5d (ships taken in battle were prizes and those involved in taking them received a share of the proceeds) [6]. The Battle of Trafalgar and its immediate aftermath did not mark the end of his story however. James lived for another 19 years, during which time he fathered another child by his wife, spent time in prison, and had six children out of wedlock. There is much left to tell regarding Captain James Atcherley of the Royal Marines.

See also: Christiana Atcherley in her own words – Part 2 and Part 3.

View the page for James Atcherley in the Atcherley Family Tree

Picture credit. A depiction of the Battle of Trafalgar by Auguste Mayer, which may show the dismasted Bucentaure: adapated from a public domain image at Wikimedia Commons.

[1] Burial register of St Peter, Walworth. Copy viewed at Ancestry.co.uk. [James Atcherley’s age was recorded as 59 when he was buried in 1834.]
[2] The Clergy of the Church of England Database.
[3] Robert Holden Mackenzie (1913), The Trafalgar roll: containing the names and services of all officers of the Royal Navy and the Royal Marines who participated in the glorious victory of the 21st October 1805, together with a history of the ships engaged in battle.
[4] Admiralty Office (1803), A List of the Officers of His Majesty’s Royal Marine Forces. Table 16.
[5] Archibald Duncan (1805), The British Trident; or, Register of Naval Actions. Volume III, pages 361-2.
[6] Pam and Derek Ayshford (2005), Ayshford Trafalgar Roll. [CD-ROM]
[7] Wikipedia: Battle of Trafalgar. Web page accessed 27 Jan 2011.
[8] William James (1859), The naval history of Great Britain, from the declaration of war by France in 1793, to to the accession of George IV. Volume III.
[9] Edward Fraser (1906), The enemy at Trafalgar : an account of the battle from eye-witnesses’ narratives and letters and despatches from the French and Spanish fleets.