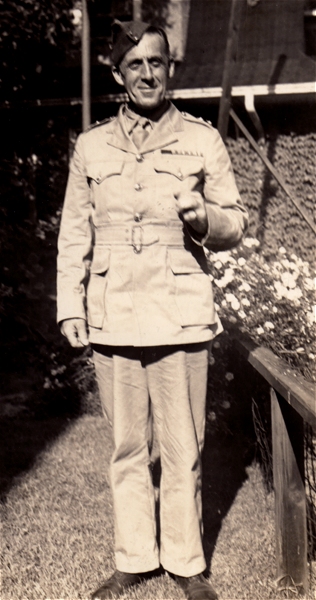 ] completed his World War One service as a Lieutenant, and completed his family with the birth of daughter Jean Marion Atcherley in 1918. [1, 2]

Hedley did not rejoin the Mounties after the war, but he did resume his police career. The Toronto City Directory of 1921 showed Constable Chas Atcherly living at Macdonald in the suburb of Mimico. In 1922 he moved to 5818 Symmes Avenue in Niagara Falls, Ontario, which would be his home for the rest of his life. He served with the Niagara Parks Police and rose through the ranks to become its chief before he retired from the force in 1954. [1, 3, 4]

The Second World War saw Hedley join the Royal Canadian Air Force Intelligence Branch. Although his rank was Flying Officer, his duties were ground-based, at Ottawa and Jarvis with the No. 1 Bombing and Gunnery School. The photo shown here was, according to the caption written on the back of it, taken in 1940. [1, 5]

After leaving the Niagara Parks Police, Hedley worked as a custodian at Main Street Public Library in Niagara Falls until he retired in 1973. He was a member of Lundy’s Lane United Church and served on its board for over 30 years. A keen bridge player, he also founded the Charles Atcherley Bridge Club. Notes on the reverse of the photo below (taken at Niagara Falls in October 1967) states that he was known to his fellow players as Batchy, the nickname originally given to Richard Atcherley of the RAF. [1, 4, 6] 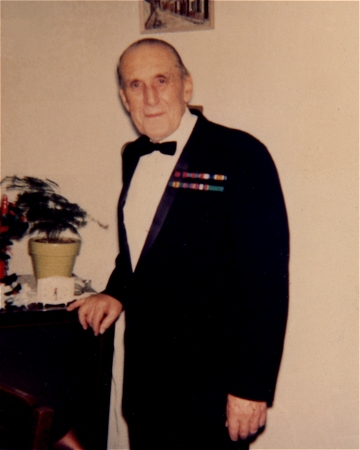 When this photo was taken, Hedley had been a widower for about two years, his beloved wife Ethel having passed away in 1965. The photo is captioned “Uncle Hedley Atcherly” and the nephew to whom it belonged was Dr Alan Conn, a son of Hedley’s sister-in-law Grace Margery Conn (nee Heather) and her husband Dr Hartly Robert Conn. Hedley is mistakenly described (in the notes on the reverse of the photo) as “Nephew of Atcherly twins.” It is unclear whether Hedley himself believed that he was a nephew of Richard (Batchy) and David Atcherley. Dr Conn clearly thought he was, and he had collected various newspapers clippings and pages from books relating to the twins’ legendary exploits. These clippings, and the photos of Hedley which appear in these articles, were found amongst some book sale ephemera in May this year, following the death of Dr Conn in October 2010. Thank you to Mary Williamson for spotting them, finding me, and passing them on. [2, 6, 7, 8]

Charles Hedley Atcherley died on 13 June 1975 at the age of 85, not in Canada but in Hockley Heath, Birmingham, England. I do not know the reason for Hedley’s visit to this country at that time, but it is possible he was visiting one or more of his sisters’ children – perhaps his nephew Charles Hedley (“Eddie”) Massey. His funeral took place on 21 June 1975 at the McLaren and Henry funeral home in Niagara Falls, and he was buried at Fairview Cemetery in the same plot as his late wife. [2, 4, 9]

Hedley’s daughter Jean, who had pursued a career as a school teacher (a 1943 directory of Ontario schools and teachers showed her at Simcoe Street School in Niagara Falls) continued to live at the family home in Symmes Avenue. Amongst the Atcherley photos and clippings collected by Dr Alan Conn is a chatty letter written to him and his wife Marion by Jean, his cousin, in February 1988. The weather, sprouting hyacinth bulbs, a pair of special depth shoes which had been recommended by the foot doctor, a new refrigerator, the minister at church, and the virtues of an electric (snow) shovel all featured. Jean commented that her father used to say that he wished the electric shovel would break, which prompted her to conclude that “older people don’t always take to ‘new inventions.’” [10, 11]

Jean was the last of the Atcherleys descended from William Atcherley of Shrewsbury (1778 – 1850) and his wife Mary (nee Cureton). She died unmarried in 1997, leaving a bequest of $7,500 to Christ Church in Niagara Falls, and was buried alongside her parents at Fairview Cemetery. A photo of the gravestone commemorating all three members of the family can be viewed at the City of Niagara Falls website. [2, 12]