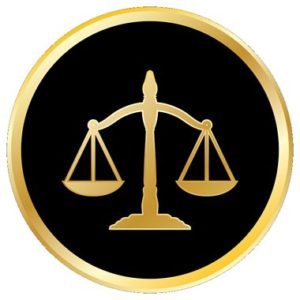 ], the first of his name, was well known in later life as Mr Serjeant Atcherley. As a Serjeant-at-Law, David was part of a select group of barristers from which judges for the common law courts were chosen, with exclusive jurisdiction over the Court of Common Pleas. The name of Mr Serjeant Atcherley (or Mr Sergeant Atcherley as it was often given) appeared frequently in the press from the mid-1830s to the mid-1840s. One of those appearances related to a court case during which David was taken back to his younger days, before he took up law and well before his name rose to any prominence. It seems that he did not find it a comfortable experience.

The case took place on 24 August 1836 at the Nisi Prius Court at Liverpool, when, according to the Westmorland Gazette:

[…] a rosy-gilled gentleman of the Falstaff genus, hight Mr. John Green, of Prescot, was called as a witness by Mr. Serjeant Atcherley, on behalf of the plaintiff. On making his appearance in the box and the oath being tendered to him, he first said that he was a witness “on the other side;” but being told that it did not signify, as he was also subpoenaed for the plaintiff, he wished to know, before being sworn, who was to pay his expenses. “They promised me £5 or £10 (said he), but I have only had a shilling for the last five days, and (continued Mr Green, laying his hands upon his capacious paunch, with an air of paternal pride and satisfaction, which might have become the great and immortal Sir John himself) such a corporation as this is not to be kept up at the rate of a shilling for five days”—(roars of laughter).

The momentous matter having been referred to the prothonotary, Mr. Forrest, that gentleman said that £4 10s. would be a reasonable sum for five days’ expenses, and the attorney for the plaintiff immediately handed over the needful to Mr. Forrest, in trust for the witness. “Now (said Mr. Serjeant Atcherley) I hope you will be worth the money to us. Will you trust the officer?” “Well (said Mr. Green), I have known him a long time, and I think I can trust him. I have known Mr. Serjeant Atcherley, too a long time. He and I learned our exercise together.”

The learned serjeant seemed rather taken aback at this information, and not very willing to acknowledge the acquaintanceship of the facetious Mr Green. His apparent chagrin was rather heightened than otherwise, when his Lordship good-humouredly said to the witness, “As a matter of curiosity, perhaps you will allow me to ask whether my brother Atcherley ever got any rank at all?” —“Well, my lord, (replied Mr. Green) I think he got to an ensign (laugher). But he was a full private when I was a sergeant; now he is a serjeant and I am only a private”—(shouts of laughter). “Pray what squad was he in?” asked his lordship. “Well, my lord, I am afraid it would take up too much time to tell you now,” replied Mr. Green, and so the colloquy ended.

Whether his Majesty’s Attorney-General for the county palatine, now that he can quote with becoming pride the motto cedant arma togae, is unwilling to recur to the military exploits of his younger days in the militia, because he belonged to the awkward squad or whether he thinks the reputation of deeds of arms, such as would become a votary of Mars, rather a drawback on the well-earned distinctions of the law, we know not, but certain it is that he did not greet Mr. Green with anything like the cordiality of an old comrade and brother soldier.

Had Mr Serjeant Atcherley really been an Ensign in his younger days, as claimed by Mr Green? Let’s travel a little further back in time, explore the early life of David Francis Atcherley, and find out.

David was born on 13 June 1783 in Chester, not as an Atcherley but as a Jones – he was named after his father, David Francis Jones senior [

]. He was of Atcherley blood however, his mother being Jane Atcherley of Marton [

]. He did not acquire the surname of his maternal ancestors until 1834, under the terms of his uncle’s will (see Richard Atcherley and his hopes for posterity).

As you might guess from the Jones surname, the paternal roots of David Francis Jones, later Atcherley, were Welsh. The Burkes, in their Genealogical and Heraldic Dictionary of 1847, described this part of David’s ancestry as follows:

David-Francis Jones, the father of David-Francis Atcherley, was the son of David Jones, of Cymman, co. Flint, Esq., and after being a solicitor in Chester and deputy baron of the county palatine of Chester, lived at Cymman, was a deputy-lieutenant of the co. of Flint, and [died] 11 Dec. 1828. His father, David Jones, lived and [died] at Cymman, and was buried 18 April, 1759. David Jones [succeeded] his father, William Jones, who became possessed of the property in right of his wife, Eleanor, the niece and devisee of David Francis, of Ruthin, co. Denbigh, Esq., who m. 27 April, 1708, Jane, eldest dau. of Ambrose Thelwall, of Llanfair, co. Denbigh, and of Bringorkin, co. Flint, Esq.

From this we can see how the estate of Cymman (or Cymmau), in the Flintshire parish of Hope, came into the possession of this Jones family (and later, the Atcherleys). We can also see that the names David and Francis came from the same source; and that the elder David Francis Jones worked as a solicitor in Chester. It was while he was living and working in that city that he married Jane Atcherley. 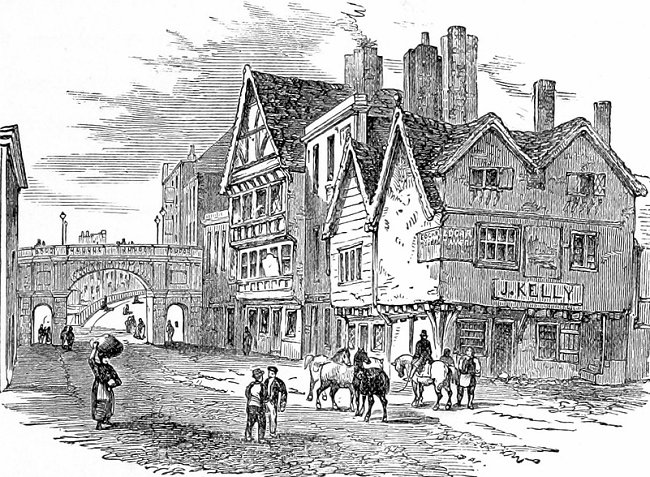 A street scene from old Chester

The wedding of David (“of the Parish of Holy Trinity in the County and City of Chester”) and Jane (of Loppington, Shropshire) took place, after the publication of banns, on 2 July 1782 at the church of St Michael & All Angels in Loppington. Based on the dates of the couple’s baptisms, David was 24 and Jane 19. The witnesses who signed the marriage register were “Elizath. Atcherley” – Jane’s younger sister – and a John Jones. Three years later, when Elizabeth Atcherley married Robert Corbett in Chester Holy Trinity (on 4 March 1785), David returned the favour, signing the marriage register as David F Jones.

David Francis Jones junior was the only child born to David and Jane. His mother passed away on 3 May 1792, when the young David was just 8 years old, and she was buried five days later at the church of St Cynfarch, Hope, as “Mrs Jones Wife of Mr David Francis Jones Atty at Law Chester”. Three years later the elder David Francis Jones gained a second wife, and the younger a stepmother, in the person of Anne Sandland of Whitchurch. This marriage added a second son to the family, Thomas Henshaw Jones, in 1796 (see The forgotten brother of David Francis Atcherley).

According to The Gentleman’s Magazine, David Francis Jones junior “received his early education at the King’s school in Chester, under the care of the Rev. Thomas Bancroft, afterwards Vicar of Bolton, and thence proceeded to the grammar schools of Ludlow and Oswestry, at which latter seminary he continued some years under the tutorship of Dr. Donne.” 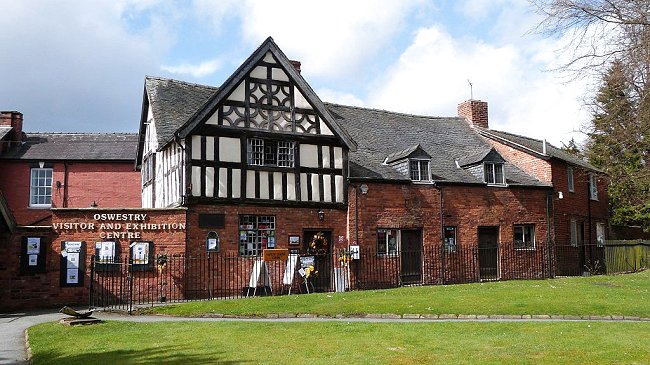 Afterwards, “He did not pursue his studies at either of the universities, but having determined to adopt the legal profession he became a member of Lincoln’s Inn early in the present century”. Before he pursued his legal training however, he spent some time as a member of the Chester Volunteer Infantry. The Chester Chronicle of 23 September 1803 reported that “David Francis Jones, jun. Gent.” and nine other gentlemen had been appointed as Ensigns to that force. The following words, from the same page of the Chronicle, go some way towards explaining the circumstances in which these young men were signing up to defend their country:

Bonaparte is evidently embarrassed by his promise to embark himself in the expedition to this Country, and “thare for good or evil the fate of his army.” There is no doubt but he dreads to trust his fortune to the sea. He has no other alternative than defeat or disgrace: disgrace, if he do not attempt to fulfill his promise, and defeat, if he do attempt it. …

In June the following year, Ensign David Francis Jones was given the Commission of Lieutenant in what was then referred to as the “Loyal Chester Volunteers”. I have not been able to determine how long he remained in that position, what military exercises he was involved in while serving, or when he left the volunteers for Lincoln’s Inn.

At that Inn of Court, David “under the advice of his friends was placed as a pupil in the chambers of Mr. Chitty, the eminent pleader, with whom he remained until the middle of the year 1807.” Then, “According to the accustomed routine of the profession he practised a few years as a special pleader, until at length, the full period of his terms having been duly kept, on the 5th July, 1810, he was called to the bar.”

So began the successful legal career of David Francis Jones / Atcherley, one which eventually brought him into contact with the John Green who reminded him of his younger days. Mr Serjeant Atcherley had indeed been an Ensign back then, but he had risen to the rank of Lieutenant. As for Mr Green, I have found nothing relating to his military service. Perhaps he got to the rank of Ensign?

Picture credits. Scales of justice: Adapted from a public domain image taken from Pixabay. A street scene from old Chester: Adapted from an illustration in Chester As It Was, published 1872, taken from the British Library Flickr photostream – no known copyright restrictions. Oswestry Visitor Centre (formerly Oswestry Grammar School): Photo by Peter Broster, taken from Wikimedia Commons and adapted and used under a Creative Commons licence.