The marriage of Christiana Shairp [

] took place at East Stonehouse in Devon on 8 November 1802. James, then a Lieutenant in the Royal Marines, was promoted to the rank of Captain within two years and, in 1805, he took part in one of Britain’s greatest sea battles (see An Atcherley at Trafalgar). He was, as Christiana later wrote, “apparently with good prospects”. Appearances were to prove deceptive however, and Christiana was to find that her match with James was most definitely not made in Heaven.

… alas it turned out far different from what I expected, as we found too late, that he was very much in debt, but as he belonged to the Plymouth Division, & that being a cheap part of the country, I was in great hopes, that by good management we might get on as well as our neighbours, but to my sorrow I too late found, that it was impossible, his habits were so expensive, fond of cards, dogs, & horses, which never can answer upon an Officers Pay, especially as I had become the mother of two lovely children, a girl and a boy, which I trusted would have made him steady, but tho personally fond of them, it had not that effect, for he still went on in the same manner, until he was thrown into the Kings Bench, when he must have lost his Commission, had I not thro’ my interest procured him the Retirement on full Pay … 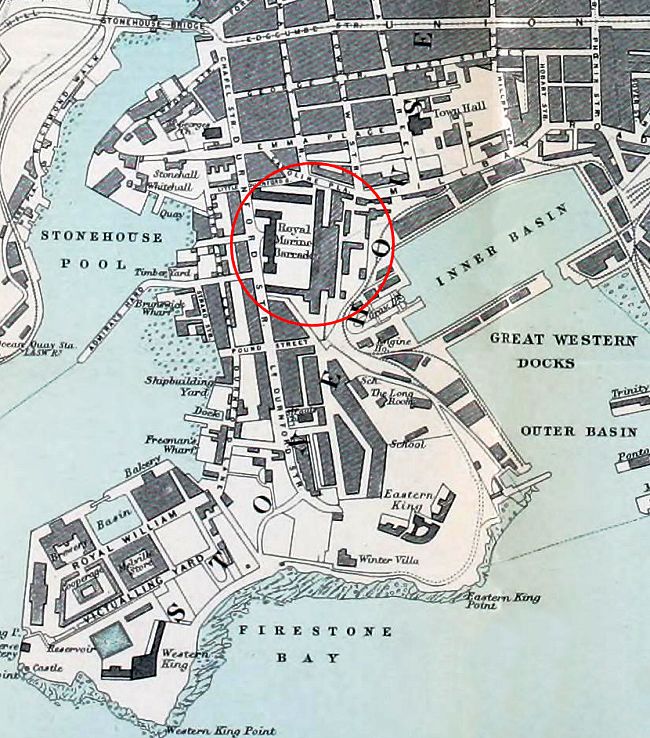 There are two sides to every story, and we only have Christiana’s side of this one, written some years after the events described. Her account seems credible nonetheless. Christiana and James certainly had two children: Emma Eustatia Atcherley [

]. Neither were baptised as infants (indeed, Emma was not baptised at all), but from Christiana’s letter (and other sources) it appears that Emma was born around 1804 and William in about 1809.

Was James rather too fond of “cards, dogs, & horses” as Christiana alleged?  I suspect he was, although – if I can talk about this in gambling terms – the odds of finding corroborating evidence are rather slim. Another ‘sporting’ activity James pursued, for which we do have evidence, was shooting. Colonel Francis Maceroni (of English birth but Italian blood) recalled in his memoirs that his first shooting expedition to Patria (in Tuscany), “was in company with Mr. Steuart and Captain Atcherly of the British Royal Marines.” It is difficult to pin down when this expedition took place, although given that James was a Captain at the time it was most likely after Trafalgar.

There is absolutely no doubt that James Atcherley got into debt and that he was, as Christiana put it, “thrown into the [King’s] Bench”. He was committed to that prison, in Southwark, on 8 September 1810, at the suit of three men: William Mitchell, James Dickie, and George Kempster Esqr (the last-named was a fellow Captain of the Royal Marines). These men had charged James Atcherley with debts of £12 “and upwards”, £22 9s 8d, and £289 10s respectively, a total exceeding £323 19s 8d.

James was discharged from the King’s Bench some nine months after his committal, having provided an account of his assets for the settlement of his debts under the Act for the Relief of certain Insolvent Debtors in England. Notices relating to this were published in the London Gazette in July 1811, when James was described as being “formerly of Plymouth, in the County of Devon, but late of Chatham, in the County of Kent, Captain of Marines.” (Another Atcherley who ended up in a debtor’s prison was Thomas of Marton, who was a prisoner in His Majesty’s Gaol of the Northgate, Chester, in 1794 – see The life and crimes and Thomas Atcherley.) 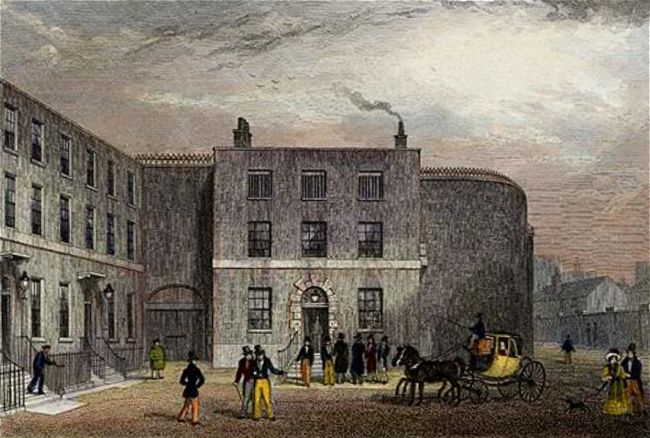 Was James at risk of losing his Commission in the Royal Marines as a result of his debts? And was Christiana instrumental in sparing him from this fate, by “[procuring] him the Retirement on full Pay”? It is a fact that by 15 May 1811, while he was a prisoner for debt, James had been placed on the list of “Officers of the Royal Marines retired on Full Pay”, so Christiana’s claims seem to have substance.

In her letter to Gilbert Innes, Christiana also revealed that she had tried to help her husband escape his debt problems in another way:

… I should have told you that just before this, my Aunt Mrs. McConichie died & left me a small house, & rather more than 3 acres of land in the neighbourhood of Edinburgh, called Gardners hall, & £400 in money, Mr John Bell W.R.T. who was my Aunts man of business, continued to be mine; I thought it my duty to give Capt A. the £400 to pay his debts, but I was advised not to do it, till he signed a renunciation of the house & ground, which as he wanted ready money he did …

The odd thing about this part of Christiana’s letter is that her aunt, in her will of 24 August 1808, did not bequeath her the property known as Gardner’s Hall. Barbara McConochie (née Shairp) [

] of the Royal Marines, and after William’s death the property was to go to his son Alexander Mordaunt Shairp. Amongst the other bequests made by in Barbara’s will was one “to my niece Mrs Atcherly and her Daughter my grandniece”. The sum bequeathed was £800.

Despite the instructions set out in Barbara McConochie’s will, Christiana did become the owner of Gardner’s Hall after the death of her aunt (Barbara passed away on 23 April 1809). According to the Old Edinburgh Club:

On 26th July 1810 sasine was granted to Christiana Shairp, spouse to James Atcherly, Captain, Royal Marines, as heir to Barbara Shairp, her aunt, of two acres and two roods of the lands of Dalry ‘with the dwelling house thereon called Gardeners’ Hall.’ Mrs. Atcherley is mentioned as proprietrix in Kirkwood’s Map (1817).

I can only assume that when Barbara’s estate was administered, a deal was done which saw Christiana giving up £400 of the £800 left to her and her daughter, in return for which she received Gardner’s Hall. As a married woman in England, Christiana had no right to her own property. However the arrangement made with her husband meant that she was able to retain ownership of her aunt’s former home, and this would have provided a modest source of income. Which was just as well, as Christiana explained in 1819:

… fortunate it was, these precautions were taken, as he has never since let us have a farthing, but has been spending his whole pay on himself, & for the worst of purposes for these last 9 years, while I have been forced to struggle thro the greatest difficulties & distress, to bring up & educate my two dearest Children, which you may easily imagine, when I tell you that my Income is under £80 per an: & that is to cover every expence …

The “worst of purposes”? To explain these words I must jump back and quote the following short passage from Christiana’s letter. It appeared between her accounts of procuring James Atcherley his retirement on full pay, and of the inheritance she received from her aunt:

… after all this instead of coming home, he formed Connections near where he was, that rendered it impossible for me to receive him …

The ‘connections’ to which Christiana referred had, in fact, been formed by James before he was “thrown into the [King’s] Bench”, not afterwards. This much is apparent from a baptism which took place at Newington St Mary in Surrey on 2 January 1818. The register shows that Eleanora, daughter of James Atcherley (Captain of Royal Marines) and Sarah, was born on 6 June 1811. The next two entries in the register recorded the baptisms of two more children born to James and Sarah (James junior, born 26 October 1815, and John, born 26 October 1817). Another daughter (Ann, born 29 August 1813) had been baptised at St George the Martyr, Southwark, on 26 December 1813.

All of the above baptisms, along with two more at Newington St Mary on 1 January 1832 (for George, born 9 August 1819, and William Henry, born 23 April 1824) appear to show that James Atcherley and Sarah were married. There is no reference to their children being ‘illegitimate’ or ‘base born’, and no separate surname recorded for Sarah. James, however, was still married to Christiana, so none of his children with Sarah (Perkins) were born in wedlock. (For more on Sarah Perkins and the sons she had with James Atcherley, see The lives of Henry Atcherley, his wives, and their families – Part 1). 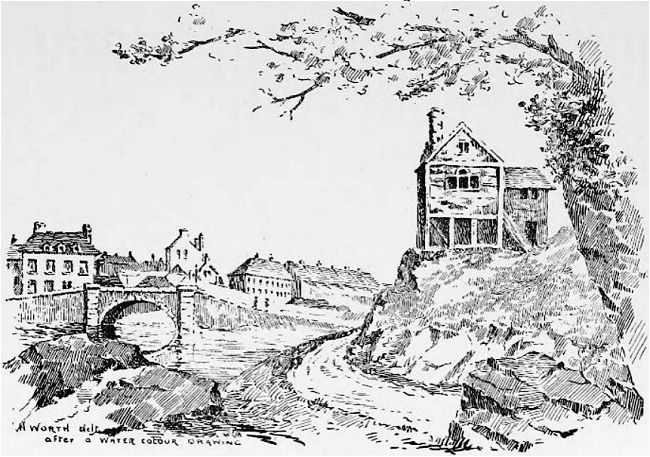 Being estranged from husband, Christiana Atcherley was left to raise two children in very difficult circumstances. Fortunately, she was able to get by thanks to her limited independent income and (to misquote the Beatles) with a little from her friends. This is another insight into Christiana’s life provided by her letter of 1819:

… I thank God I have met with very kind friends, (otherwise I should not have been able to get on at all), especially in the Countess Dowager of Rothes, who lived for 7 years next door to me at Plymouth, & knows all I have gone thro, her Daughter is Godmother to my little boy

Christiana was determined to improve her family’s situation, but as a married woman without the support of her husband she faced an uphill struggle:

… I wish to God it was in my power to maintain myself & children, I would never trouble him for sixpence;  I have even applied to Mr Rose lately to see if I could not get appointed as matron of an Hospital, but he gives me not the smallest hopes, as none but Widows are entitled to it …

Christiana Atcherley had not exhausted all her options just yet however. The quote above is taken from one of two earlier missives which have survived for over two centuries, having been written by Christiana in 1811. In those letters, details of what Christiana did next are revealed.

References (See also the references for Part 1 of this story)