I have not found a baptism record for Mary Cureton Atcherley [

], daughter of William Atcherley and his wife Mary (Cureton). However the ages given for Mary on census returns and on her death all indicate that she was born in 1810-11. The census returns, from 1841 to 1881, are consistent in one other respect too: they all show one of Mary’s nieces living with her, a niece who was also named Mary Cureton Atcherley [

My notes for the birth of the elder Mary Cureton Atcherley in my offline Atcherley tree on RootsMagic originally read as follows: “The ages given for Mary on census returns and at death all point to a birth in 1810 or 1811. Given that her mother died in October 1810, having given birth to a daughter in or about July of that year, I can only conclude that Mary was Hannah’s twin sister. Alternatively, Mary’s age was consistently incorrect and she was actually born in 1809.”

Well, it would seem that Mary’s age was “consistently incorrect” in the census records! A document held by Shropshire Archives, relating to the will of Mary’s maternal uncle Thomas Cureton and dated 9 August 1828, noted that Mary would not attain the age of 21 until 17 December 1829. This means that Mary was born at the end of 1808, and was not the twin sister of Hannah [

] – who died not longer after the the passing of the girls’ mother in 1810. An inscription on the family’s upright tomb chest in the graveyard of Baschurch All Saints reads as follows:

HANNAH their Infant Daughter died Feby 24th 1811 aged 7 Months; and was buried in the same Grave with her Mother.

Mary Atcherley, née Cureton, was buried at Baschurch on 8 October 1810 and her baby daughter joined her on 26 February 1811. Curiously, the Baschurch burial register records the latter as “Mary Atcherley / Infant / Shrewsbury”. Was this a simple clerical error, with the name of Hannah’s mother, or of Hannah’s sister, being written by mistake? Or were the names of the girls switched after the burial, so that the name of Mary Cureton could be perpetuated by her sister?

From the events of 1810/11 we jump forward thirty years to the census of 1841, the first national census to record the names, and other details, of all the occupants of every household enumerated. Some of the details recorded were rather vague (adult ages were typically rounded down to the nearest five years, and relationships between household members and specific places of birth were not given) but the household of William Atcherley [

] at Cadogan Place, in a part of Frankwell, Shrewsbury known as The Mount can be identified. Living with William at that time were two Mary Atcherleys: his daughter (aged 30) and his granddaughter (aged 13). The houses pictured below, though located elsewhere in Frankwell, would probably have been a familiar sight. 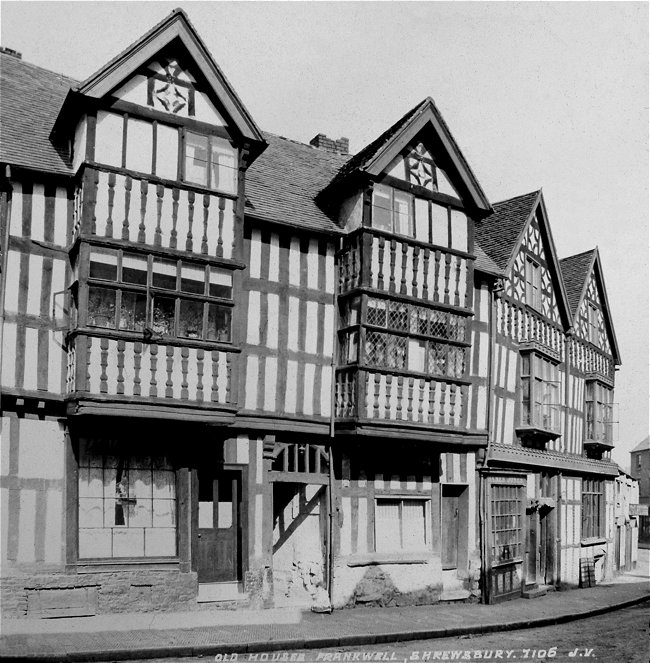 The younger Mary Cureton Atcherley was the first-born child of William’s son Thomas Cureton Atcherley. She was born at Astley Abbots in Shropshire, and baptised there at the church of St Calixtus on 25 May 1828. She was baptised for a second time two years later on 18 May 1831 at Shrewsbury St Chad, along with her younger siblings Anne and Eliza.

Both the elder and the younger Mary Cureton Atcherley must have been regarded with considerable affection by William Atcherley, as he made generous provisions for them in his will of 2 August 1845. In that document, “William Atcherley of the Mount near Shrewsbury in the county of Salop Gentleman” bequeathed to his daughter Mary Cureton Atcherley “all the household goods furniture plate linen china and books except books of account horses and carriages and all other the goods things and effects which shall be in about and upon the dwelling house coachhouse stable and premises now occupied by me”. The remainder of William’s real and personal estate with the exception of “trust and mortgaged estates” were to be sold and from the proceeds various monetary bequests were to be paid, including the following:

William’s other children and grandchildren were to receive smaller amounts or were residuary legatees (receiving equal shares of whatever money was left). William Atcherley died at his home at The Mount in October 1850, at the age of 72.

The Misses Mary Cureton Atcherley – neither of these two ladies ever married – both invested their inheritances in annuities. They were thus recorded in the census of 1851, when they were visitors at the home of widow and farmer Mary Cross at Plealey in the parish of Pontesbury, as annuitants. Finding the Atcherley aunt and niece on this census was not easy as their names were written by the enumerator as Mory Burton Asterley and Mary Burton Asterley. I can only assume that the writing on the original household schedule was not very clear. I flushed them out by searching for Mary (no surname) born around 1828 in Astley Abbots – thank goodness her age and birthplace were both written accurately.

By 1861 the elder Mary Cureton Atcherley had left Shropshire and moved to Lancashire, where she set up home at 13 Plymouth Grove in Chorlton. Sharing her home were, in addition to her niece, her nephew Edward Cureton Atcherley (who would only live for about another year; he died in Wolverhampton in 1862), a domestic servant and a lodger. Although both aunt and niece were ladies of independent means, the income from a lodger was no doubt very useful.

Miss Mary Atcherley (the elder) was still living at 13 Plymouth Grove in 1863 according to that year’s edition of Slater’s Directory of Manchester and Salford, but by 1871 she had taken up residence at another Chorlton address, 3 Norton Place. The younger Mary was again recorded with her, and once more there was a domestic servant and a lodger. 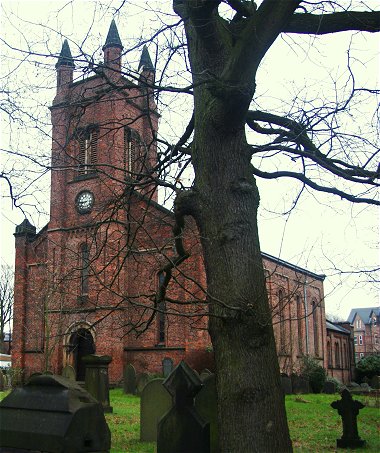 The census of 1881 was the last on which the elder Mary Cureton Atcherley appeared. Now aged 70, Mary was still in Lancashire but had moved to 4 Marriott Street in Withington. She had no servant, and her income was supplemented by a boarder rather than a lodger, but the niece who shared her name and who herself was now 50 years of age, was still with her. The niece probably remained with her aunt until the latter’s death, in January 1883. Unlike the other members of her immediate family, all of whom she had outlived, Mary was buried not at Baschurch in Shropshire, but at her local church of St Paul in Withington (pictured above / right; click on the image to see the original at the Geograph website). By some dreadful error her name was written in the register as “Henry Cureton Atcherley”.

I wrote earlier that both the elder and the younger Mary Cureton Atcherley must have been regarded with considerable affection by William Atcherley, father of one and grandfather of the other. It seems that similar bonds of affection were shared between aunt and niece, for they appear to have been constant companions over a period of more than 40 years. But I have warned elsewhere against making assumptions based on census data, which provides only a series of snapshots of people’s lives, fleeting images ten years apart which may or may not give a reliable picture of how they lived.

The census of 1871 shows that the younger Mary was then a “private teacher” and that of 1881 recorded her occupation as “governess”. She was almost certainly the Miss M C Atcherley of Leamington who, according to the Aberystwyth Observer of 8 July 1865, was then staying at 52 Marine Terrace in that town. I think there can be very little doubt therefore that she was also the Miss Atcherley of 12 Charlotte Street in Leamington who advertised her “select Ladies’ School” in the Leamington Spa Courier and the Worcester Journal from 1863 to 1866.

It is interesting to note that when Priscilla Atcherley – a sister of the younger Mary Cureton Atcherley – was married in 1865, the wedding took place at Leamington. The register showed that Priscilla was a resident of the town, so perhaps she spent some time there with her sister before she became Mrs William Matthews. I strongly suspect that their aunt remained in Lancashire during that time, though visits between niece and aunt very likely took place.

So the Misses Mary Cureton Atcherley may not have been constant companions in the sense of spending an unbroken period of over four decades living together under the same roof. But the word constant does not only describe something that is invariable or unchanging, it also describes someone who is steadfast, faithful and loyal. That meaning, I’m sure, applies to the relationship between the elder and the younger Mary Cureton Atcherley, regardless of any periods of time the two may have spent apart.

Picture credits. Monumental inscription at Baschurch: photo by the author. Frankwell, Shrewsbury: image from a lantern slide dated around 1905 and out of copyright. St Paul’s church, Withington: photo © copyright Bill Boaden, taken from Geograph and adapted, used and made available for re-use under a Creative Commons licence.