Dr John Atcherley’s service with the Royal Canadian Navy in World War One saw him acting as Surgeon not only to the crew of an RCN sloop, but also to crews of the two submarines that vessel tended. With his shipmates he undertook a voyage from one side of Canada to the other via the Panama Canal, before narrowly avoiding a cataclysmic explosion, sailing to Bermuda and back, and being joined on board by a renowned inventor (whose name may ring a bell).

Having been recorded on the thirteenth census of the United States in 1910 in San Francisco, John Atcherley [

] and his family found themselves being enumerated again just one year later, at 646 Harris Street in Vancouver, British Columbia, for the fifth census of Canada. The schedule showed that they had immigrated in 1911 itself; presumably in the first half of the year given that the census began on 1 June.

John, aged 45, a native of England who had become a naturalised American in 1900, now gave his nationality as Canadian. The census shows that he was a surgeon working on his own account; in other words, he was in private practice. In 1912 however, John obtained employment as a surgeon with the Canadian Pacific Railway Company. He worked for the CPR until 1914 – which was of course the year in which the Great War in Europe began, prompting calls for Canadians to come to Britain’s aid.

John answered the call. Joining the Royal Canadian Naval Reserve, on 1 May 1915 he became Surgeon of the Shearwater, a submarine tender based at Vancouver’s Esquimalt Dockyard. This was probably at or around the time that the vessel was transferred from the British Royal Navy to the Royal Canadian Navy, her name changing from HMS to HMCS Shearwater (pictured below in ‘dazzle’ camouflage paintwork). 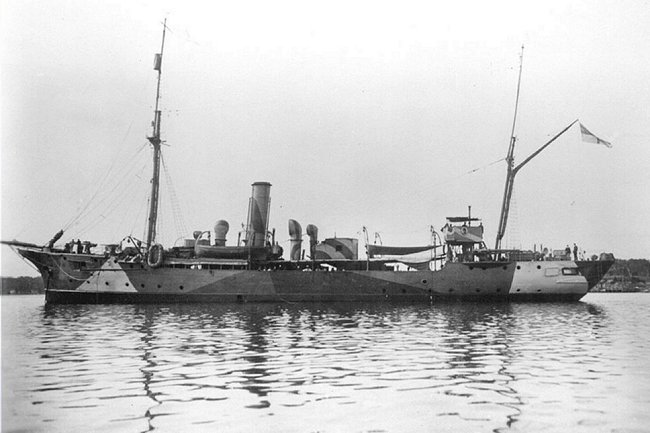 The 980-ton Condor-class sloop aboard which John served had been commissioned at Chatham Dockyard in Kent, England in 1901, and had been in service with the Royal Navy in the eastern Pacific. The submarines she tended, CC-1 and CC-2, had been bought from Chile by the government of British Columbia on the day that Britain declared war on Germany, for the purpose of defending the province from German attack. Since Canadian provinces had no power to maintain military forces, the subs had quickly been transferred to the RCN. HMCS Shearwater was lent by the Royal Navy to tend them and she was officially commissioned for that purpose on 8 September 1914.

The German threat to Canada’s western seaboard had come from a squadron of ships in the Pacific under the command of Vice-Admiral Graf Maximilian von Spee. However all but one of that squadron’s ships were destroyed after they entered the Atlantic, during the Battle of the Falkland Islands in December 1914. The surviving ship, the Dresden, was scuttled by her crew in Chilean waters after the Royal Navy finally caught up with and started firing upon her in March 1915. 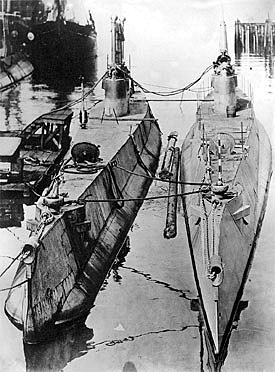 when John Atcherley joined the Shearwater’s crew, the risk of a German attack upon the west coast of Canada was negligible. Over the ensuing two years the sloop accompanied the submarines in its charge as they followed a peacetime routine of spending about two weeks each month at sea, diving and firing practice torpedoes (the Shearwater acting as target), and spending the intervening periods at harbour (see photo, right). During the latter periods the submarine crews maintained the subs’ engines and other equipment, and lived aboard the Shearwater.

In 1917, it was decided to transfer the subs to Canada’s east coast, with a view to sending them across the Atlantic. The voyage began on 17 June. John Griffith Armstrong (in his book The Halifax Explosion and the Royal Canadian Navy) describes what happened:

If it had ever existed, the need for the subs to remain on the west coast had long since passed. Under the mistaken impression that the already obsolete boats, with their finicky two-cylinder engines, would be of use in European waters, the British Admiralty had asked for them to be made available at Halifax. An epic voyage ensued. The vessels were en route from June, their 8,000-mile passage marred by frequent break-downs and long stays in a series of ports. Although a dedicated but overworked crew constantly cleaned and overhauled the engines, cylinders and piston heads cracked, and fuel pump crankshafts broke. Without the enthusiastic assistance of the US Navy, including frequent towing, during the subs’ passage through the Panama Canal and up the eastern seaboard, it is doubtful that the hapless little flotilla would have found its way to Halifax.

Mechanical breakdowns were not all that the submarine crews had had to endure during their journey. In the Tropics, the temperature in the subs’ boiler rooms reached highs of 140 degrees. On one occasion the battery of the CC-2 caught fire and the resulting clouds of chlorine gas incapacitated most of the men on board. It seems likely that the Shearwater’s surgeon John Atcherley was kept busy during the voyage!

The submarines, and their mother ship HMCS Shearwater, arrived at the RCN’s dockyard in the port of Halifax on 14 October 1917. Although CC-1 and CC-2 were ordered to refuel and head across the Atlantic, carrying out the latter part of those orders was clearly impossible. The Admiralty therefore cabled as follows: “Consider submarines should be repaired and should remain at Halifax where they may be useful if enemy submarines cross Atlantic.”

The need for the submarines to undergo extensive repairs freed the Shearwater for other duties. She therefore accompanied four drifters on a voyage to Bermuda, where the latter were to be delivered to the Royal Navy. Consequently, the Shearwater had most likely departed Halifax before the catastrophic explosion of 6 December 1917. The collision of two ships in the harbour on that date, one of which was laden with wartime explosives, was the largest man-made explosion up to that time, causing the deaths of around 2,000 people and injury to thousands more.

Just as Navy Lists published in Britain in 1916 and 1917 had shown John Atcherley as Surgeon of the Shearwater, so Canadian Navy Lists during 1918 showed the same (the photo above shows John with his shipmates in 1919). By August of that year the Shearwater had returned to Halifax from Bermuda, to find that the repair work and refitting of submarines CC-1 and CC-2 had been completed. With German U-boats now operating around the Newfoundland and Nova Scotia coasts, destroying ships and laying mines in Canadian harbours, anti-submarine capability was needed. CC-1 and CC-2 were not fit for full operational service, but they were capable of being used for training purposes.

Tended once again by their old mother ship, the submarines were to head for Cape Breton’s salt-water Bras d’Or Lakes. There, they would become targets for hydrophone operators to hone their submarine detection abilities. They would also develop their own anti-submarine warfare skills – it was still hoped that the subs would eventually head out into the Atlantic to engage the enemy. 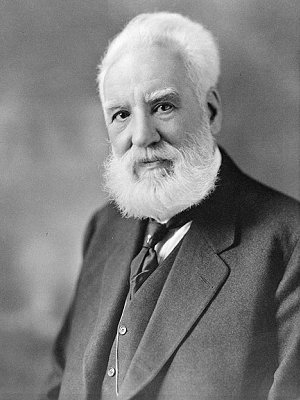 the event, a shortage of suitable crewmen meant that only CC-2 (the better of the two subs) was despatched to Cape Breton, accompanied by the Shearwater, on 31 August 1918. The RCN’s files on the work that went on there have sadly been destroyed, but a detailed record was kept by a civilian scientist with considerable expertise in acoustics, who worked with the naval personnel throughout September. That civilian scientist was none other than Alexander Graham Bell (pictured right), best known of course for inventing the first practical telephone. His diary shows that he spent time aboard the Shearwater while it was ‘torpedoed’ (an experience he is said to have found “disconcerting”). He used that ship’s hydrophones to listen to the sounds made by the CC-2 and other vessels, before carrying out experiments to improve the reception of a number of underwater detectors. It seems inconceivable to me that during this time, Bell and Atcherley would not have met.

CC-1 never joined her sister sub at Cape Breton. Instead, at the end of October 1918, CC-2 (presumably along with the Shearwater) was recalled to Halifax, arriving there on 4 November. One week later the Armistice was signed and the Great War was over. This marked the end of Dr John Atcherley’s wartime service – but not the end of this story. There is more to tell, regarding the contributions to the war effort made by other members of John’s family (see An Atcherley Family’s World War One: The Canadian Home Front), and of John’s post-war life.