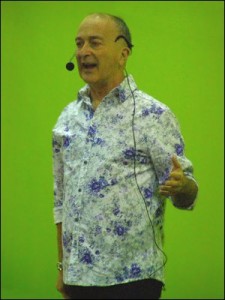 I attended  Who Do You Think You Are? Live! in London, where I listened to an entertaining and educational talk given by Tony Robinson (best known as Baldrick in the BBC’s Black Adder and as the presenter of Time Team on Channel 4). Perhaps the most memorable quote was an alternative definition of genealogy which someone had given Tony: “Social networking for dead people!”

Tony had started his presentation by saying that everyone in the audience knew more about genealogy than he did. This may in part have been false modesty, but it was probably also an indication that Tony is more of a family historian than a genealogist. His interests extend beyond the compilation of trees containing names with dates and places of birth, marriage and death: he also wants to find out how his ancestors and their families lived. He is therefore delighted by the increasing opportunities to do exactly that, thanks to the ongoing digitisation and dissemination, via the Web, of historic records, records which I believe he referred to as “echoes of the past”.

Time travel would be a wonderful way to find out more about the lives of those who went before us, and in a sense, Tony argued, this is in fact possible. In a reference to the BBC’s Doctor Who, Tony suggested that for many of us, the words ‘time travel’ conjure up images of jumping into a blue police telephone box and physically travelling back to past ages. In reality however it is our ancestors, or at least records relating to them, that have travelled forward in time to the present. These records provide us with marvellous opportunities to learn about our forebears. Tony highlighted census records, and in particular the details of people’s occupations contained within them, as examples. Knowing what people did for a living can tell us a lot about the lives they led.

Echoes of past lives, including those of the Atcherleys, have found many other ways to travel through time. Evidence of this can be found throughout Olympia’s National Hall – the venue for Who Do You Think You Are? Live! – over the course of this weekend (and of course elsewhere, in the real world and online). The major players in the genealogy world such as Ancestry, Find My Past and FamilySearch, all have an increasingly wide range of record sets available which provide glimpses into the lives of Atcherleys past, with more in the pipeline. I am particularly looking forward to searching the digitised militia records, historic newspapers and Welsh parish registers that Find My Past will be making available later this year, all of which should reveal new information about various members of the Atcherley family. (Transcripts of the Welsh registers will also be accessible through FamilySearch.) I will in addition be following up my visit to the stand of the College of Arms, with a view to finding out what material they possess relating to those Atcherleys who claimed the right to bear the family coat of arms. And with the Atcherley family having such strong roots in the county of Shropshire, I decided to join the Shropshire Family History Society while visiting their stand – hopefully this organisation will have much of interest among its Salopian record transcriptions.

For the most part, the snippets of information which have survived their journeys to the present day were not written by our ancestors, and neither were they the result of our ancestor’s conscious efforts to communicate with their descendants. Wills are something of an exception. Written by or at the behest of an individual, a will was typically penned to ensure that money, property and other possessions went to particular family members or relatives, and perhaps in turn to the heirs of those people. These documents, which have travelled through time from a bygone age, now provide an inheritance very different to that which was intended, to descendants more distant than the testators could ever have imagined. Care does have to be taken when interpreting them though (as it does with other echoes from the past). Advice from experts can be helpful, and I am very grateful to the member of the Society of Genealogists (part of the society’s Ask The Experts panel) for her help yesterday in interpreting part of an Atcherley will from 1721.

Not everyone left a will of course (and not every will written has made it to the 21st century). One legacy we have all received from all of our ancestors however is some of their DNA. Exhibitors at Who Do You Think You Are? Live! this weekend include the International Society for Genetic Genealogy, and commercial DNA testing companies such as DNA Worldwide and Family Tree DNA. DNA from Atcherleys of long ago, present within the Y chromosomes of their direct male line descendants alive today, could shed light on the origins of the Atcherley family and might even provide information on the relationships between different branches of the Atcherley family tree.

Genetic information which hitch-hikes through time via the Y chromosome faces a journey of uncertain duration, particularly if those Y chromosomes are being transferred from one generation to the next within a small family. The path from past to present for information on paper or parchment can also be a perilous one. Accidents, neglect and deliberate destruction have all taken their toll. Yet despite all the hazards, much information has travelled successfully through time and is now being preserved and made more widely accessible.

From these echoes of the past we can learn a great deal about the lives of our ancestors and their families – and through the internet we can share what we learn with others. I plan to do exactly that for the Atcherley family through this website. It’s not what Baldrick would call a cunning plan, but maybe that’s just as well!