The Rev. Dr. Brown said they had come on a solemn errand, and were assembled to render the last office of respect and affection to the sacred dust of one who had passed from their midst, and gone home to be with God. … Speaking for himself, he could remember when the parents of Mrs. Rose belonged to the congregation of a Manchester church of which he was then minister; and well could he recall how Sunday after Sunday in those far off days she was one of the children who sat in the congregation before him.

It was fitting that the Rev John Brown should give an address at the funeral service for Fanny Rose, née Atcherley [

], which was held on Friday 3 April 1908 in Bedford. Not only had he known Fanny and her family during his ministry at Park Chapel in Manchester, from 1855 to 1864, he had also become reacquainted with her when she moved to Bedford after her marriage. In that town, and particularly in the Bunyan Meeting, their paths had crossed many times over the ensuing years. Rev Brown had therefore had “more than usual opportunities of tracing the growth and maturing of [Fanny Rose’s] character” and observing how she became a “refined and intellectual woman”. 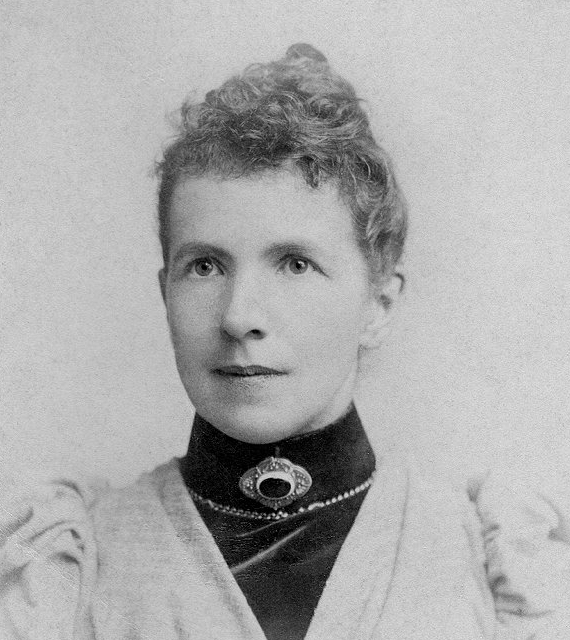 Fanny was the first child born to John Atcherley and his wife Sarah, nee Barkley. Her baptism at the Independent Chapel in Hunter’s Croft, at the lower end of Cannon Street in Manchester, shows that these Atcherleys were non-conformist Christians. Fanny was baptised on 25 May 1851, and the baptism register shows that she was born on 9 December 1850 – so although she was said to be 4 months old when the 1851 census was taken, she had not quite reached that age.

At the time of that census, John, Mary and Fanny Atcherley were living at 23 Stanley Street in Manchester. They were still residing in Stanley Street, but at number 49, ten years later. John, who was working as a draper’s assistant in 1851, was by 1861 a silk weaver earning enough to employ a servant and a nurse. His family was growing. Fanny now had three younger siblings: Lucy, Barkley and Jessy. And, as we have seen, the family was worshipping at the Park Chapel every Sunday, where the Rev John Brown was minister.

Park Chapel – formerly known as Ducie Chapel – was (along with Hunter’s Croft Chapel) an ‘independent’. Part of the growing Congregational Church movement in Manchester, its affairs were managed by its own congregation. John Brown’s work as minister there was evidently respected beyond the confines of the city in which the chapel was located. On 31 March 1864, at a meeting held in Bedford, it was unanimously agreed “That the Rev. John Brown, B.A., of Park Street, Manchester, should be invited to the co-pastorate of Bunyan Meeting.”

The Bunyan Meeting (the Bedford chapel of which is pictured below) took its name from its celebrated 17th century pastor John Bunyan, author of The Pilgrim’s Progress. Brown accepted the invitation to become its co-pastor, leaving Manchester and the Atcherley family behind him. One member of that family would however follow him to Bedford, some six years later. Might the Reverend Brown have played a part in this? 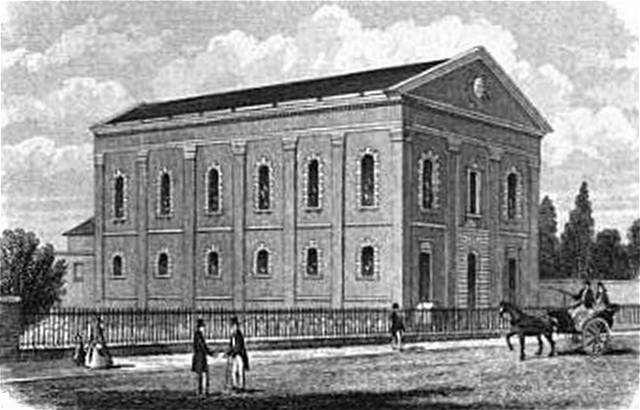 ] at Park Chapel in Manchester, by John Brown’s successor the Rev John Emmett Jones. Edward was 29 and a widower. He had wed Emma Goode at the Baptist Bloomsbury Chapel in London in 1864, and with her had two children: Thomas Edward Rose and Agnes Emma Rose. Tragedy struck in May 1867, when the death of 3-month-old Agnes on the 17th was followed by that of Emma, aged 26, just two days later. Both passed away at the Rose family home in St Cuthbert Street, Bedford.

How did Fanny Atcherley, in Manchester, meet and become the second wife of Edward Paine Rose of Bedford? One possibility is that religious connections helped to bring the two together. Edward was said to have had a “life-long association with the Bunyan Church”. As fellow non-conformist Christians Edward and Fanny were kindred spirits. Did the Rev John Brown, co-pastor of the Bunyan Meeting and former minister of Park Chapel in Manchester, act as matchmaker? Or were connections of another sort involved?

Edward Rose was a linen and woollen draper – following the death of his father Thomas Rose, he had taken over the family business in Bedford in 1863 and managed it in partnership with his stepmother, Mary. John Atcherley meanwhile was listed as a silk mercer in Slater’s Directory of Manchester and Salford of 1863. Notices published in theLondon Gazette in 1865 and 1867 show that John, in partnership with others, was running John Satterfield and Co., Linen Drapers and Silk Mercers, in St Anne’s Square in Manchester. By 1869 the business was being referred to as “John Satterfield & Co. (Oliver and Atcherley)”. Trade connections may well have brought John Atcherley into contact with Edward Rose, and as a successful draper Edward must have seemed a good match for John’s eldest daughter.

The census of 1871 captured a snapshot of Edward and Fanny’s life together, a little over four months after their wedding. Edward P Rose, 30, a native of Bedford, was a draper employing 42 persons. Wife Fanny, aged 20, and son Thomas, 6, completed the family, which was supported by a cook and a general servant. Although she was not part of the household, Edward’s stepmother and business partner Mary (then living at 22 St Peters Green in Bedford) may also have provided some support to Fanny. She was after all familiar with the situation that Fanny was in. Edward Rose had lost his birth mother Emma (nee Paine) soon after he was born at the end of 1840, and Mary had then married the widowed draper Thomas Rose in 1846. 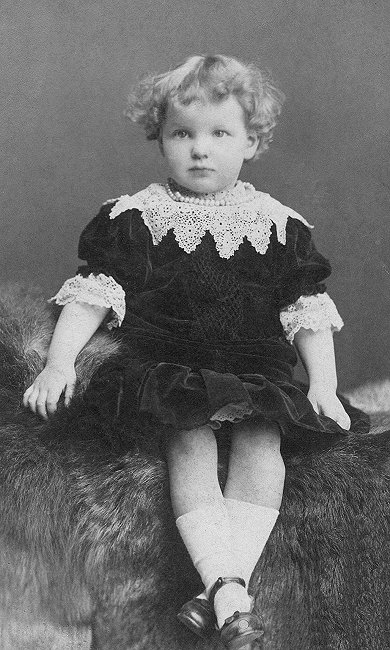 Edward and Fanny’s first child was already on the way when the 1871 census was taken. The birth of Edward Barkley Rose was registered at Bedford in the last quarter of that year. Three more children followed: Frank Atcherley Rose (born 5 October 1873), John Leonard Rose (birth registered in the last quarter of 1877) and Isobel Gwendoline Rose (known as Gwen, born 15 January 1884 – pictured right). The demands of motherhood no doubt occupied much of Fanny’s life during the 1870s, ‘80s and ‘90s, although she did have help. Both the 1881 and 1891 censuses show that the Rose household included a nurse in addition to other servants.

Edward meanwhile continued to run his drapery business in Bedford’s High Street. Directories listed him as both a “wholesale and retail draper, silk mercer, and woollen merchant” and a “mantle warehouseman, milliner, and dressmaker”. But he also involved himself with the Bunyan Meeting (of which he was a Trustee) and the wider community in Bedford. When a meeting was held in 1872 to discuss the establishment of a local branch of the Young men’s Christian Association, Edward attended on behalf of the Bunyan Meeting, and agreed to be the Treasurer of the branch.

Other bodies on which Edward served included the Town Council and the Harpur Trust, a charity established in 1566 to provide education, recreational facilities and relief to Bedford residents in need of assistance. Edward was, in addition, made a Justice of the Peace for the Borough of Bedford in 1894, and it was said that “as far as his health permitted, he gave assiduous attention to the duties of that office”. Edward provided financial as well as practical support to a number of local causes: after his death it was written that “His philanthropy was shown in the erection of the Cabmen’s Shelter in St. Peter’s and in subscriptions to several charitable institutions, especially those in which the late Mrs. Rose was interested.”

From the quote above it can be seen that Fanny Rose, nee Atcherley, predeceased her husband. She died shortly before midnight on Monday 30 March 1908 at the family home, 45 De Parys Avenue in Bedford (which Edward had built and into which the Roses moved, from St Cuthbert Street, around 1894). She had been “ailing for the past five or six weeks, and succumbed after an operation.” It was following her death, and particularly after her funeral, that Fanny’s devotion to her faith and to charitable causes were published:

During her residence in Bedford this amiable and estimable lady was keenly and practically interested in charitable work, and movements for the amelioration of the sick and suffering. In the social and religious work of Bunyan Meeting she naturally found pleasure and occupation, but her sympathies were by no means confined to congregational limits. Mrs. Rose frequently attended the sewing and general meetings of the Bedford Women’s Liberal Association, and helped gladly in the educational work. … Her interest in intellectual movements was shown by her support for several years of the University Extension lectures in the town, and Mrs. Rose herself was a regular attendant. To the Work of the Charity Organisation Society Mrs. Rose gave her close attention, and she was also a member of the House Committee of the Bedford District Nursing Association, which was established in affiliation with Queen Victoria’s Jubilee Institute for Nurses. Her connexion with these societies brought her in contact with the poor, and her valuable service will be missed by all concerned. Her activities were manifest in useful channels, her advice was very helpful, and her service was always cheerfully given. Many and genuine are the expressions of sorrow and condolence received by her bereaved husband and family, for whom sincere sympathy is very generally felt.

It is not surprising to learn that Fanny’s coffin “was completely hidden by the exceedingly beautiful floral emblems and tokens placed upon it.” It was said that her death was “a blow from which [her husband] never recovered”. Having lost his wife, and also his only daughter, Gwen (on 30 June 1910) Edward Paine Rose passed away at ten o’clock on the morning of 10 June 1911. He departed this life knowing that he had made provision for his surviving children, for the Bunyan Meeting and other local causes, and for the continuation of the family business. He knew too that he had left a fitting tribute to his late beloved wife: “a beautiful stained glass window” in the Bunyan Memorial Hall, built in 1910 at Elstow, the Bedfordshire village in which John Bunyan had been born.

For photographs of more of Fanny’s children, and of her sisters, see Fanny, Jessy, Rose and Lily Atcherley in the Photos section of this website.