The first Atcherley to be listed in a trade directory appears to have been Roger, a mercer and draper in Whitchurch, Shropshire in the late 1700s. Among those Atcherleys claiming second place (and certainly the first female Atcherley to be so listed) was none other than Roger’s wife, Elizabeth.

], who was named after his father, was the youngest of nine children. Born on 9 June 1743, he was baptised a week later on 16 June at Shrewsbury St Chad. Although his father was married to Ann (née Thomas), the parish register named his parents as “Roger & Joan”. This was presumably an error on the part of the clerk as I have found no other evidence to suggest that Roger Atcherley junior was born out of wedlock.

Roger Atcherley senior, a tanner, died some 12 years after his youngest son’s birth and was buried at Shrewsbury St Chad on 16 December 1755 (see Roger Atcherley and his one shilling legacies). A little over a year later, on 16 February 1757, the widowed Ann Atcherley apprenticed 14-year-old Roger to James Burley of Shrewsbury, a glover, at a cost of £20. Burley was a member of the Shrewsbury Glovers’ Company (also known as the Glovers’ & Skinners’ Company), and was a Warden of that trade guild in 1764 and 1765. 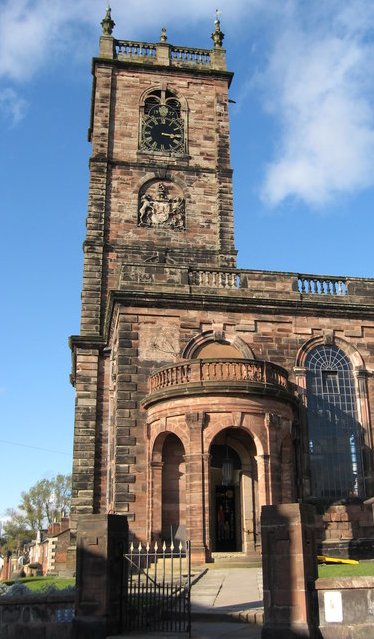 In setting Roger as an apprentice, Ann Atcherley’s goal was to ensure that he would learn a trade which would provide him with a secure future. In this Ann was successful, although Roger did not remain a glover. Nor did he stay in Shrewsbury. The next record I have found in which Roger features is that of his marriage, on 3 January 1768, to Elizabeth Scripture [

]. The wedding took place at the church of St Alkmund in Whitchurch, Shropshire (pictured right). Roger lived and traded in that town for the rest of his life.

Unlike her husband, Elizabeth was a native of Whitchurch. With her unusual surname it was quite easy to find a record of her baptism, although for some time an element of doubt remained as to whether or not the record I had found really did relate to Roger’s wife. The reason for this was that Elizabeth Scripture was baptised on 7 April 1729, over 14 years before her husband was born.

It appears that Elizabeth had two sisters, Ann, who was baptised at Whitchurch on 2 July 1726 and married Samuel Trevor at nearby Prees on 8 June 1752; and Mary, for whom I have found no baptism record, but whose marriage to George Jackson of Malpas, Cheshire, was witnessed by Elizabeth Scripture at Whitchurch on 15 October 1758. The girls’ parents, John Scripture and Elizabeth, née Barrow, were buried at Whitchurch on 23 January 1736/7 and 2 March 1786 respectively.

Most of the marriages for which I have seen records during my family history research – certainly those relating to first marriages – have involved men and women of around the same age, but usually with the groom being older than the bride. Nuptials between a man of 24 and a woman of 38 most certainly do not fit the typical pattern. Elizabeth’s age at the time of her wedding might go some way to explaining why she and Roger only had two children. The baptisms of their son John and daughter Mary Atcherley took place at Whitchurch on 22 November 1768 and 16 October 1773 respectively.

Although the record of John Atcherley’s baptism gives no information beyond the names of parents and child, the entry in the parish register for Mary’s baptism shows that the family was then living in High Street, Whitchurch. An indication that Roger must then have been trading successfully in that town is that he was one of 32 men of Whitchurch who formed a society for pursuing and prosecuting felons. This society was announced in the Shrewsbury Chronicle of 10 July:

Whitchurch, Shropshire, June 24, 1773.
Whereas divers Persons guilty of Felony, Burglary, Grand and Petit Larceny, frequently escape punishment, either through fear of the expence which may attend their prosecution, or for want of an immediate and vigorous pursuit, or from a principle of ill-timed lenity and moderation,
Notice is therefore hereby given,
That in order to prevent in some degree the evil aforesaid, We, whose names are hereunto subscribed, inhabitants of the parish of Whitchurch aforesaid, have formed ourselves into a Society for the purpose of raising a sufficient fund to defray the expence of pursuing, detecting, and prosecuting with the utmost rigour, such as shall be guilty or shall be suspected to be guilty of the crimes or offences above specified, against the person or property of any member of this society. …

(For more information on these societies, see John Atcherley and the deterrence of felonies.)

A notice published in another newspaper (Chester’s Adam’s Weekly Courant) on 4 May 1779 shows that “Mr. Roger Atcherley, Mercer” had lately been the holder of “A very convenient freehold messuage, or dwelling-house, with the Shop and Appurtenances thereunto belonging, pleasantly and advantageously situated for carrying out any Business in the High-street, in Whitchurch”. The property was to be let, so it appears that Roger may have moved to alternative premises around that time. Further particulars of the property were to be obtained from a Mrs Trevor of Whitchurch – possibly Roger’s sister-in-law Ann.

The 1784 edition of Bailey’s British Directory; or, Merchant’s and Trader’s Useful Companion listed Roger Atcherley as a mercer and draper in Whitchurch. This is, as I have already mentioned, the earliest listing for a member of the Atcherley family which I have found so far in any trade directory. (See Directories Part 1.)

Bailey’s British Directory did not give an address for Roger in Whitchurch, but he was most likely still trading in the town’s High Street. When Robert B Jones, a bookseller, stationer and bookbinder of High Street, Whitchurch, announced in 1791 that he was “removed across the street” his new shop was said to be “next door to Mr. Atcherley’s.”

Despite the fact that he was much younger than his wife, Roger Atcherley predeceased Elizabeth. He was buried at the church where he had married and where his children had been baptised, Whitchurch St Alkmund, on 27 April 1793. He was 49 years old.

Although she was aged 64 when she lost her husband, Elizabeth Atcherley evidently took over the family business. She was listed as a draper amongst the “Traders &c.” of Whitchurch, Shropshire in volume 4 of The Universal British Directory of Trade, Commerce, and Manufacture  (published around 1800, see extract, left).

This directory, published some four decades before the census of 1841, provides a fairly detailed picture of the town in which Elizabeth Atcherley and her children then lived. Whitchurch was described as “a pleasant and populous market-town”, 12 miles from Nantwich, 20 from Chester and Newport, 22 from Newcastle under Lyme, and 161 miles from London. The town had coach services to Birmingham, Manchester and London, and mail services to Malpas and Chester, and to and from London.

In addition to the gentry and the clergy who headed the list of the principal inhabitants of Whitchurch, there were other residents undertaking a wide range of occupations: an architect, attorneys, an auctioneer, bakers, booksellers (including the aforementioned Robert Jones), braziers, breeches makers, a bricklayer, butchers, cabinet makers, chandlers (including tallow chandlers), cheese factors, a china shop proprietor, clock (and watch) makers, a collar maker, a confectioner, coopers, curriers, a “Chymist and Druggist”, excise officers, farmers, grocers, flax dressers, a gardener, a habit maker, hairdressers, the 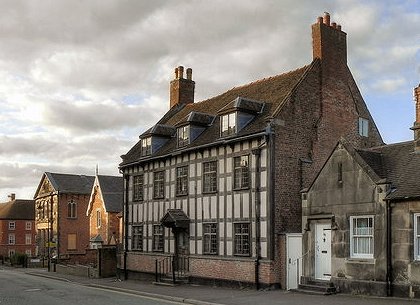 head of a School for Ladies (possibly at Ellesmere House, pictured right), a heel maker, a hosier, hucksters, ironmongers, joiners, a liquor merchant, maltsters, a mantua maker, a mason, mercers, milliners, a “nailor”, a plasterer, two plumbers and glaziers, rope makers, saddlers, shoe makers, a sieve maker, smiths, a stay maker, a stocking weaver, surgeons, “taylors”, a timber merchant, a tanner, a turner, an umbrella maker, victuallers (there were no less than 23 public houses), wheelwrights and writing masters. There were also other drapers, some listed as linen and woollen drapers.

Roger and Elizabeth’s daughter Mary Atcherley followed her parents to the grave on 30 March 1802. Aged 28 (the burial register knocked a year off her true age), Mary was unmarried. Her brother John was wed the following year (one of the witnesses was Ann Trevor, possibly John’s maternal aunt) and through him the Atcherley family continued to trade in Whitchurch. John Atcherley was a victualler rather than a mercer or draper.  In time however, one of John’s sons would take up the trade carried on by Roger and Elizabeth Atcherley in Whitchurch.