Sisters Mary Elizabeth Hope Atcherley and Hester Mary Eleanor Atcherley – Hope and Hester – attended The Queen’s School in Chester from around 1904 until just before the First World War. Thanks to the online archive of the school’s magazine Have Mynde, it is possible to follow the Atcherley sisters’ progress through those years and share some of the experiences of their school days.

] were daughters of solicitor Richard Topping Beverley Atcherley and his wife Caroline Mary Wynne (nee Ffoulkes). They were born at Hatch End in Pinner, Middlesex, Hope in 1894 and Hester in 1895. The family later moved to Caroline’s home city of Chester. A newspaper article mentioning “Mr. R. Atcherley, of 9, Stanley Place” indicates that they were established there by November 1903. Other sources dating from 1904 onwards give the Atcherleys’ address as 6 Stanley Place.

It was not until 1906 that the name Atcherley was first seen in Have Mynde, The Queen’s School Annual. Every year, the magazine reported on the “successes … gained by Pupils of the Queen’s School during the past year” in Public Examinations. In the 1905 Local Centre Examination of the Associated Boards of the Royal College of Music and the Royal Academy of Music, both M. E. H. Atcherley (Hope) and H. M. E. Atcherley (Hester) passed in the Elementary Division, Piano. Hope had also passed in Division I of the Royal Drawing Society of Great Britain and Ireland examination, in June 1905, and I suspect she was the “H. Atcherley” who received a Grade I certificate from the London Institute for the Advancement of Plain Needlework that year. 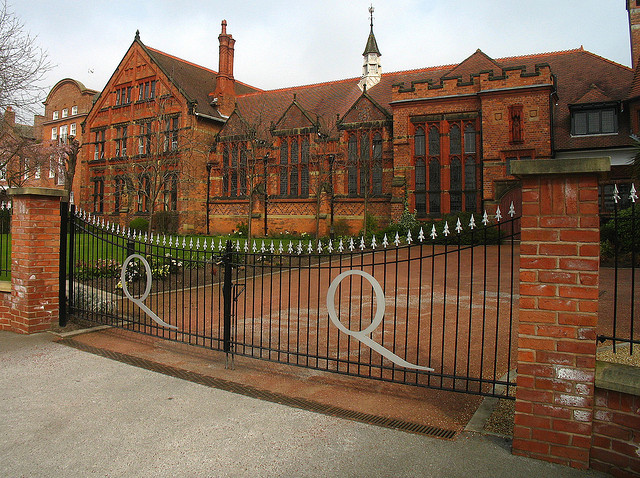 The results of these examinations continued to feature one or both of the Atcherley sisters’ names in most of the ensuing editions of Have Mynde up to that of 1912. Gradually, Hope and Hester moved up the divisions or grades of the exams, sometimes with a pass, sometimes with honours. In the 1910-11 school year Hope and Hester were both successful in the Higher Division (Piano) of the music examinations. In the same year Hope gained a certificate at Grade V of the needlework exam. During the following year Hester passed in Division V of the Royal Drawing Society of Great Britain and Ireland examination, while Hope gained honours in the same Division and passed in Division VI.

The names of both Hope and Hester also appeared from time to time in connection with the school’s annual distribution of prizes. The 1907 event took place in the Town Hall on 7 November, when Lady Grosvenor distributed the prizes. Hope Atcherley, then of Form III Lower in the Middle School, received a prize for Scripture. In 1908, she was presented with prizes for both Scripture and Sewing, while Hester was recognised in the category of “Distinctions in Examinations”. Other pupils were given prizes for Mathematics, Arithmetic, Natural Science & Geography, French & Latin, German, English Language & Literature, English & History, Drawing, Music (Pianoforte), Cricket, Hockey, Tennis and Games (General Excellence).

Further prizes were received by the girls in 1910 (Hope Atcherley, for Sewing), and in 1912 (Hester Atcherley, for Scripture). Hope, meanwhile, also received recognition for her botanical drawings in the Royal Drawing Society’s Annual Exhibitions of Paintings. She was commended in the Second Class in 1909-10, received an award in the Fourth Class the following year, and was again commended in the Second Class in 1911-12.

The Atcherley sisters seem not to have excelled in sporting activities. A report in the 1911 issue of Have Mynde shows that during the 1910 season of the school’s tennis club, Hope Atcherley had participated in the “Inter-Form Tournament for Miss Clay’s trophy” which took place on 27 and 28 July. With M Finchett for IV Form Upper, Hope beat B Stewart and M Swire of Form V Lower in the first round, 6—3, 6—1. In the second round however, Atcherley and Finchett lost to the Form III Upper team, 6—1, 6—1. I have found no other references to either Hope or Hester in connection with the school’s tennis, hockey or cricket matches.

As for academic subjects, in the July 1913 examinations of the Oxford and Cambridge Joint Board, Hester Atcherley gained Higher Certificates in Botany and French. I have found no indication of any similar achievement by Hope Atcherley.

A fascinating insight into the minds of the young ladies of the Queen’s School is provided by the following account of the School’s Debating Society meeting of 20 February 1913. Proposer of the motion ‘England is declining’  was “H. Atcherley” (Hope, or Hester?).

The Proposer opened the debate by saying that English character was beyond all doubt deteriorating: hardships were invariably shunned—even corporal punishment was strictly limited; religion was becoming ineffective, as shewn by the Disestablishment Bill; manners were deteriorating, (the men being discourteous and the women unwomanly). Patriotism was a thing of the past; the Colonies, and even Ireland, were demanding self-government; in fact, the Empire was simply falling to pieces. 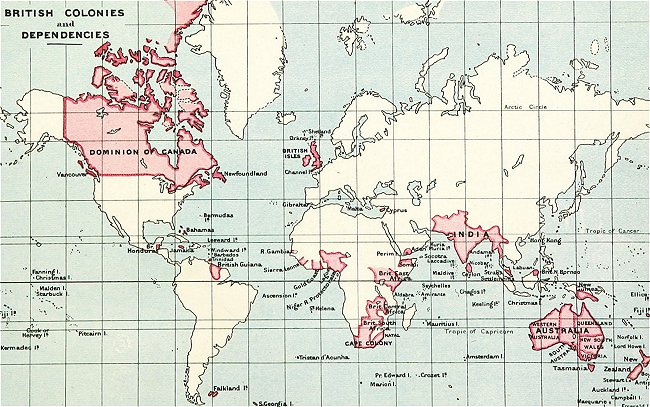 The Opposer replied by saying that character was much improved; drunkenness, at least, was no longer a common vice; moreover Britons were, to foreigners, examples of truth and courage, and were taught self-reliance by their games. With regard to self-government for the Colonies, it was only natural that, as growing countries, they should require these; nor would it be to England’s benefit that they should be entirely dependent on her. The Empire was perfectly patriotic and united. …

E. Brotherton here renewed the question of religion, and how greatly it was falling off.

The Proposer deplored the absence of Church-going, and the fact that people were no longer compelled to go. …

An eager discussion followed as to the respective merits of French and English aviators; but here the President rose to call upon the Proposer to sum up. In spite of her convincing speech, the motion that ‘England is declining’ was negatived by twelve votes to six.

Both Hope and Hester became members of The Queen’s School Association of Past and Present Pupils. Hester joined the association’s committee for 1912-13 and served again the following academic year. Hope was listed as a member of the association in the 1913 edition of Have Mynde, but from 1914 both sisters’ names appeared in the list of members. By 1916 Hope was a life member, having paid the required sum of one guinea. Hester was elected Assistant Secretary in 1914 and again 1915. She may also have been the “H. Atcherley” elected as one of two Honorary Secretaries in 1917, but she had not paid her subscription for the 1917-18 year.

It was not only as members of the Association of Past and Present Pupils that the names of Hope and Hester Atcherley appeared in Have Mynde from 1915 to 1918. These were of course years during which the First World War was raging – and as we will see, the Atcherley sisters were both very active on the Home Front during that period. In this connection, the final words of this article by Hester Atcherley, published in the 1913 edition of Have Mynde, had greater meaning than Hester could possibly have imagined at the time:

During the Winter and Spring Terms, we received an interesting course of First Aid and Sick Nursing Lectures, Kindly given by Mrs. Drinkwater. The classes were open to all girls from the Upper IV. upwards, and about twenty-six joined, and the science room proved ideal for our work.

It was, indeed, surprising to find how little we knew concerning the treatment of quite slight accidents. Most of us came thinking we could pride ourselves on knowing how to treat a case of nose-bleeding. But we soon discovered our mistake. We were all very keen and rapidly made good progress, and Mrs. Drinkwater expressed her approval of our zeal.

I think we nearly all liked the last part of each lesson best, when we were shown the uses of the triangular bandage and afterwards put them into practice ourselves. It is such an unassuming bandage, and yet can be turned into innumerable shapes as the case requires. At first, it provided us with some amusement too: the sight of our friends, a moment ago hale and hearty, transformed into sufferers with broken arms and fractured jaws proved too much for our feelings. But this frivolity soon worked off, and we became serious and hard-working.

The lectures came all too soon to an end, and we found ourselves to face to face with an examination. We had all done our best and revised most diligently for this examination, and yet most of us dreaded it. Somehow, it seemed so different from other Examinations. It was the not knowing quite what to expect that alarmed us. But all is well that ends well, for, happily to say, every candidate passed the examination. 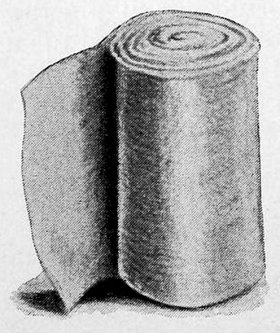 Then, during Spring Term, came a series of classes on a first course of Sick Nursing. On the whole, these were not as interesting as those on First Aid. There did not seem to be so much scope for putting our knowledge into practice. The roller bandages were much more exciting than the triangular, the only drawback being the wearisome rolling up after each time.

It would be unfair not to give a word of praise to the small children from the lower Forms who, in many cases, acted as patients. They were very good, for our exactions were great. In one case we had a very good little patient, who allowed herself to be tucked up in bed, and lay motionless while each pupil made her bed.

We are now anxiously awaiting an examination, and hoping we shall not forget what to do when the time comes.

> On to Hope and Hester Atcherley’s World War One – Part 1.

Note: All digitised copies of Have Mynde can be accessed from the Have Mynde Archive.