] was one of four children born to Henry Oliver Atcherley [

] and his wife Emma. My Atcherley research had revealed details of the lives and deaths of all the other members of this family, but Kate had seemingly disappeared without trace after the 1891 census. Until this week that is. Thanks to findmypast.co.uk, Kate’s fate has finally been revealed and the story of her family can now be completed.

Kate’s father Henry was born in 1850 at Shaldon in Devon. His father, Rowland (brother of Elizabeth Atcherley – see An Atcherley in Germany), died just a few months later on 11 Mar 1851. Strangely, Henry does not appear on the census which was taken at the end of that month. He was not recorded either with his mother and sister in Bath, or with his aunts and his older brother (named Rowland after the boys’ father) in Devon. He was however living in that county (at 2 Lower Mount Road Terrace in Exeter), with his aunt Caroline and brother Rowland, when the next census was carried out ten years later.

During his time living on the Devon coast, Henry would have regularly seen ships at harbour and out at sea. No doubt he also encountered some of the men who crewed those ships. Ultimately, Henry was inspired to become a seafarer himself. The crew list for the Samarang of London, which arrived at Sydney, New South Wales, Australia on 15 February 1869 included an 18 year old Ordinary Seaman Atcherley, of Devonshire. (The available scans of the list do not show the extreme left hand edge of the page so the forenames of the crew members cannot be seen in their entirity, but the second initial of ordinary seaman Atcherley was O. Despite the fact that transcriptions of the list show him as Chas Atcherly, there is no doubt in my mind that this was Henry Oliver Atcherley.)

By 1871 Henry (or Harry as he was named on both the 1861 and 1871 census returns) had received his inheritance and returned to life on dry land. On the night of April 2nd/3rd that year he was lodging at 5 Church Street in Islington and “living on the interest of money.” With him was someone who was recorded as his wife, an Emma E Atcherley. In fact, this young lady’s name at that time was Emma Elizabeth Goldup [

]. Born in 1849 at Newington in Surrey, daughter of Thomas and Emma, she did not marry Henry until 31 Jan 1878, by which time all four of the couple’s children had been born!

Emma was in fact pregnant at the time of the 1871 census – she gave birth to her first child, Emma Goldup Atcherley, before the end of September that year. The family was then living in Colebrook Row in Islington, and may still have been supported by the interest of money. By the end of the following year however, Henry was working to support his family. Kate, the second child of Henry and Emma, was born towards the end of 1872 at Canonbury Tavern in Islington. The tavern was a long-established and well known public house with extensive grounds which Henry was presumably running. The couple’s third child, Harry, was also born there in, or just before, 1874. 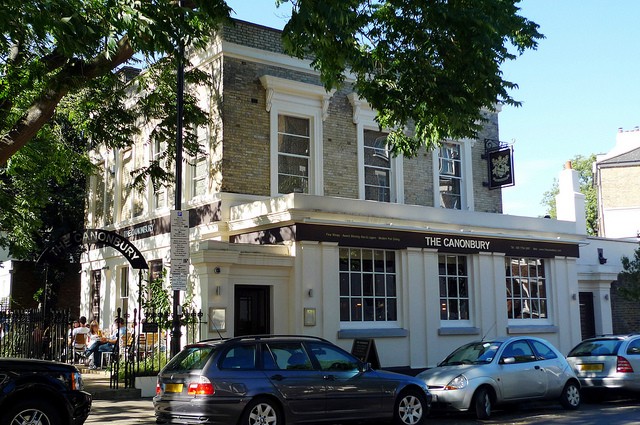 The Canonbury, formerly the Canonbury Tavern, home of Henry Oliver Atcherley and his family in the early 1870s. Photo by Ewan Munroe. Used under a Creative Commons licence.

The family had moved to Upper James Street in Pancras by November 1875 when Jessie Elizabeth Atcherley, Henry and Emma’s fourth child, was born (on the 6th of that month). Henry was still working as a licensed victualler at that time, declaring this as his occupation when he registered Jessie’s birth.

Detail from a copy of Jessie Atcherley’s entry in the register of births. Click on the image to see more detail at Flickr. Image © Crown Copyright, posted in compliance with General Register Office copyright guidance.

After a few years in the pub trade it appears that Henry returned to the high seas. The marriage register of St Philip’s in Lambeth, where Henry was married in 1878, shows that he was at that time a midshipman. It is not clear how long he worked in this capacity. All I know for certain is that in 1881, three years after his marriage, Henry was running a public house once more, in Loudoun Road, St Marylebone.

Some time over the following decade, Henry moved with his family to Brighton in Sussex. The 1891 census records Henry living at 38 Queens Park Road in Brighton. He had no occupation. Had he put enough money by to retire, despite his relatively young age? Or was he unemployed and without a source of income?

The 1891 census also shows that Henry was then a widower, living with his daughters Rose and Kate and his son Harry. His wife Emma had died the previous year, at the age of about 40, her death being registered at Brighton. Henry and Emma’s youngest child, Jessie, had passed away some years prior to this, not long after her parents’ marriage. She was then only about two and half years old. Her burial, at Abney Park Cemetery in Stoke Newington, took place on 18 April 1878.

Two more members of this family passed on before the 1901 census took place. Rose Goldup Atcherley, the oldest of the children, had married Harry O’Donoghue Vosper in 1896 and with him had a son, Roy Atcherley Vosper, at Preston, Sussex in 1898. Rose’s death occurred within months of Roy’s birth, being registered in the first quarter of 1899 at Brighton. She was only 27. The Registrar for Brighton then recorded the death of Henry Oliver Atcherley, aged 50, in 1900.

Harry Atcherley was the only one of Henry and Emma’s children to appear on the 1901 census. He was still living at 38 Queens Park Road in Brighton, but as a boarder, living on his own means. The head of the household was Charles Thompsett, a brass founder, who lived there with his wife Queenie. Henry was still single, of private means, and boarding with the Thompsetts ten years later. By this time however the Thompsetts had five children, and they were living in Old Shoreham Road at Southwick in Sussex. This arrangement may well have continued until Harry’s death, at the age of 44, in 1918.

But what happened to Kate? This week, findmypast.co.uk added indexed transcriptions of British births and marriages registered overseas. One of the marriages, registered at the British Consulate at Brussels, Belgium in the period 1891 to 1895, was that of Abraham Hurwitz and Kate Atcherley. At last, I knew why Kate did not appear in any of the usual record sources after the 1891 census. The question now was: what happened to her after she married Abraham Hurwitz? I was concerned that having lost Kate and then found her, I would now lose her again if she had remained abroad following her wedding.

Fortunately, findmypast.co.uk came to the rescue again. It showed that a Kate Hurwitz married a Maurice J D Grimes in 1910 in Fulham registration district. It also provided a 1911 census schedule showing Maurice, aged 28, a bank clerk who had been born at Shanklin on the Isle of Wight, living at 68 Avonmore Road in Kensington with his wife Kate, aged 38, who was born in London (her age indicating that her birth had occurred in 1872 or 1873). The couple had been wed for less than a year, which tied in with the marriage record I found. Kate Grimes, formerly Hurwitz, née Atcherley, was alive and (hopefully) well, and living once more in the city of her birth.

Maurice Grimes died in London in 1943. Pinpointing Kate’s demise is little more tricky as there are two potential death registrations. The most likely was in Wandsworth registration district in the first quarter of 1946 (age at death recorded as 73). The alternative was in Surrey South East in the last quarter of 1948 (age at death recorded as 75). Either way, despite initially ‘disappearing’ from the records, in the end Kate Atcherley was the longest surviving member of her family.