Eliza Atcherley was the third child of Thomas Cureton Atcherley and his wife Mary, née Matthews. She was baptised, along with her two elder sisters Mary Cureton and Anne, on 18 May 1831 at Shrewsbury St Chad. Mary and Anne had previously been baptised at Astley Abbots, where they were born, but this was the first and only such ceremony for Eliza. According to St Chad’s baptism register, Eliza’s family was then resident at The Isle, an area situated to the west of Shrewsbury town within a loop of the River Severn, where Thomas Cureton Atcherley was a farmer.

By 1835 Eliza’s family had moved to The Hurst in the parish of Westbury. They were enumerated there on the 1841 census – but the three eldest children, including Eliza, were not with them. Mary Cureton Atcherley was staying in Shrewsbury with her grandfather and the aunt with whom she shared her name (and with whom she would spend many years of her life – see Constant companions? The Misses Mary Cureton Atcherley). Anne and Eliza Atcherley meanwhile were two of 19 girls, whose ages ranged from 4 to 20, living at Chilton Cottage in Atcham. This was the home of Martha Houlston, a governess, and it is presumably where Anne and Eliza Atcherley were educated.

Catching up with Eliza ten years later via the 1851 census, we find that she was once more living apart from her parents and siblings. A member of the household of Thomas Juckes, a farmer of 650 acres at Tern in the parish of Ercall Magna, 19-year-old Eliza (her age recorded as 24) was one of four house servants employed alongside a dairy maid, a groom, a waggoner, an errand boy and a waggoner’s boy. This isn’t quite the occupation I expected to see young Eliza engaged in, but it was perhaps a sign of the decline in her family’s financial fortunes: her father had been declared bankrupt in 1846.

In the early 1850s Thomas Cureton Atcherley, with his wife and most of their children, relocated to Chapel Ash in Wolverhampton. Whether Eliza moved with them at that time I do not know, but she had certainly rejoined them by the time the 1861 census was taken. The Atcherleys’ abode was by then in Wolverhampton’s Darlington Street, and at 29 years of age Eliza was by far the eldest of Thomas and Mary’s offspring who were still living with them. The other children were John Roger Atcherley, who was working for the Great Western Railway and would continue to do so for the rest of his life (see John Roger Atcherley and railway accountancy), Charles Cureton Atcherley, who would seek his fortune in America (see Paris, Texas: Charles Cureton Atcherley in the USA, and Stephen Atcherley, who would travel even further in his search for success (see An Atcherley in Australia).

Eliza too had to spread her wings and fly the nest. Her father Thomas was well established as a grocer by this time, and it was perhaps through his contacts in this trade that Eliza Atcherley found employment with James Proffitt.

James Humphrey Proffitt – his middle name seems to have been used almost exclusively in records at the beginning and end of his life – was the youngest son of John Proffitt and his wife Ann, née Smith, of Aldridge in Staffordshire. When James was baptised, on 28 January 1824, his father was said to be a farmer, but the baptismal records for James’s older siblings from 1813 onward show that prior to this John had been a butcher.

By June 1841, 17-year-old James was living in Birmingham High Street, where he worked as an assistant to Charles Flewitt, a chemist. He was still an assistant ten years later, but by that time he had entered the grocery trade. James had moved in with, and starting working for, his brother William Proffitt at 162 Hockley Hill in Birmingham. From there, James went on to set up in business on his account: Slater’s Directory of Birmingham for 1852 included, in its entries for “Grocers, &c”, William Proffitt at 161 & 162 Hockley [Hill], and James Proffitt at 55 Lichfield Street.

The 1855 Post Office Directory of Birmingham showed that James’s business was expanding. He was described as a “wholesale & retail teadealer, grocer & provision factor” and was trading not only at 55 Lichfield Street but also close by at 43 Stafford Street. From 1857, he started placing notices in the Birmingham Journal, seeking first, a porter and an assistant, and then an assistant and an apprentice. Unfortunately, he also appeared in the Journal of 11 November 1857 as one of several persons who “were convicted […] in 10s. and 6d. each, including costs […] for unjust scales”. These convictions were based on the information of a man with a name which sounded quite appropriate given his job title: “Mr. Way, Inspector of Weights, &c.”

The Journal’s report of the court case gave James’s address as Lichfield Street, but the advertisements James placed asking for new recruits all directed those interested to apply to him at Stafford Street. The latter address – 41 and 42 Stafford Street to be precise – was where James was enumerated on the 1861 census. He described himself as a grocer, aged 37 and single. Living with him were four servants: three grocer’s assistants and a general servant. 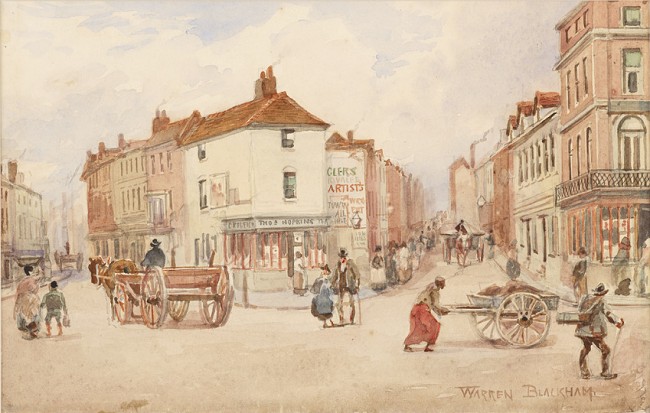 The 1860s saw James maintain his business rather than expand it further. In 1864 he advertised, in Aris’s Birmingham Gazette, for “an ASSISTANT [who] must have a good knowledge of the Provision Trade. Also, a JUNIOR”, with applicants once more to apply to him at Stafford Street. Kelly’s Directory of Birmingham for 1868 confirmed that he was still numbered amongst the grocers and tea dealers, with premises at 42 & 43 Stafford Street and 65 Lichfield Street.

The latter part of the 1860s also saw James getting involved in local government in Birmingham. In 1866 an election of Borough Auditors and Assessors resulted in “James Proffitt, Lichfield Street, grocer” being appointed as an Assessor for St Mary’s Ward. In 1869, he was one of 21 of his Ward’s Burgesses who signed a public letter addressed to their Councillor Edward Tailby. The following notice then appeared in Aris’s Birmingham Gazette of 2 Apr 1870:

Included in the list of those elected was “James Proffitt, 65, Lichfield Street, grocer”, who received 188 votes.

Eliza Atcherley was probably living with James by this time – as an employee. The 1871 census shows him living in Stafford Street as in 1861, but now at number 85. Sharing his household were two grocer’s assistants and Eliza, his housekeeper. Nothing to see here, just a busy working single man who was also doing his bit for his local community, and an employee keeping his house in order.

Although the census of 1871 clearly shows James living at number 85, directories such as White’s Directory of Birmingham for 1873 continued to show him conducting business from number 43 – and 65 Lichfield Street too of course. It was as “James Proffitt, provision dealer, Lichfield Street” that he appeared before the Birmingham Police Court, and in the local press, having been charged with “selling butter certified by the borough analyst to be adulterated” in 1874. James entered a plea of Guilty, the case was adjourned, and later resumed for the decision of the Magistrates, Messrs. S. Buckley, T. Lane, and Alderman Biggs. The arguments made around the facts of the case were reported on in some detail by the Birmingham Daily Post of 4 June, from which the following extract is taken:

Mr. Wilkinson then addressed the Bench in mitigation of penalty. The defendant, he said, had been in business twenty-two years, and had carried on his trade in the most respectable manner. The butter in question was part of two casks which he purchased from another grocer in Aston Street, who had received from Ireland a larger quantity than he required. The butter was placed by defendant in his shop, labelled 14d. per lb., and it was perfectly certain that no one purchasing it could have thought it was fresh butter. […] The analysis made by Mr. Bird stated that the butter was genuine in quality, and quite fit for domestic use.

It was pointed out that there was no law to say how much salt there should be in butter, a fact which caused great difficulties for magistrates in cases like this. Mr Buckley, on the bench, said that a fine of 5 shillings plus costs would be sufficient, but shortly afterwards made this statement, which closed the Post’s report: “If they could not define what was genuine and pure, they could not define what was adulterated.” I still haven’t worked out whether James Proffitt was fined or not!

Did the publicity around this case have an impact far greater than any fine? James had been trading successfully for 22 years, but his life as a grocer was soon at an end. The 1876 edition of Kelly’s Directory of Birmingham was probably one of the last publications to include the entry “Proffitt James, grocer, 65 Lichfield street & 42 Stafford street”. An entry in another publication, The London Gazette, on 14 March that year, spelled out the sorry circumstances: “James Proffitt of No. 42, Stafford-street, and No. 65, Lichfield-street, Birmingham, in the county of Warwick, Grocer, Tea, and Provision Dealer, and Dealer in Wines, Spirits, and Cigars” had instituted proceedings for liquidation. Could it be that in the end, despite his name, James failed to turn a sufficient … profit? 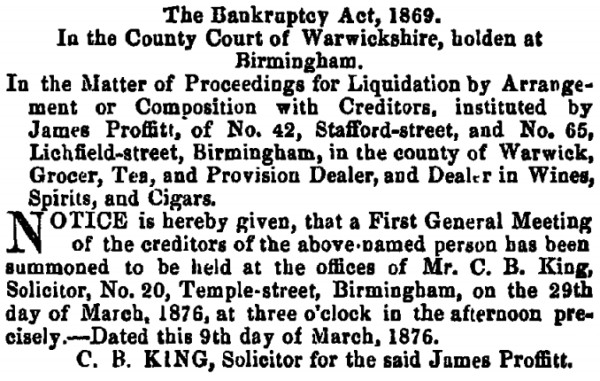 James continued to appear in directories covering Birmingham, but as a private resident only. The Post Office Directory of Birmingham for 1879 showed him living at 164 Victoria Road, Aston Park, and it was at this address that he was enumerated on the 1881 census. He was now a commercial traveller, with a lodger – and a “visitor”, Eliza Atcherley, of no occupation. It might well be that Eliza was captured by the census as a short-term guest of her former employer, but somehow I doubt it. Ten years later James Proffitt was still ensconced at 164 Victoria Road, with a domestic servant and a boarder, and Eliza Atcherley, living on her own means, was still there. Her relationship to the head of the household was given as “Friend”.

Eliza Atcherley died on 2 September 1896, not in Birmingham but at the home of her sister, the widowed Priscilla Matthews, at New Milverton, Leamington, in Warwickshire. The grant of probate on her will however recorded that Eliza’s permanent address was 164 Victoria Street. As we have seen, Eliza left everything she had to James Proffitt, her friend. James was also made an executor and trustee of her will. Eliza’s effects were valued at £694 16s.

James died 4 years later, almost to the day, on 30 August 1900. The main beneficiaries of his will were three relatives, but amongst various legacies to a range of other people one stands out: a gift of £200 to Priscilla Matthews, who most likely took care of Eliza Atcherley during her final days. Not a sister-in-law but perhaps the next best thing.

Eliza Atcherley and James Proffitt – were they ‘just good friends’? Call me an old romantic, but despite the fact that I’ll never be able to prove it I think they were much more than that. Their relationship may well have been purely platonic, but I believe there was a love between Eliza and James as strong as that between any married couple.