< Back to The mystery of the missing Militia man.

On April 28 [1812] two of the companies [of the Worcestershire Regiment of Militia] quartered at Portsea Castle joined the regiment at the Colwert Garden Barracks, Portsmouth. On May 12 the other company proceeded to Southsea Castle from Portsea Barracks. At this time a detachment of the regiment, consisting of ten sergeants, ten corporals, five drummers, and 176 privates, with the following officers, Lieutenants C. K. Rudge, C. B. Eastwood, J. Atcherley, and Ensigns S. Galindo and E. Sweetman, were serving as marines on board H.M.’s ships lying in Portsmouth Harbour, upon which prisoners of war were confined. […] – Robert Holden (1887), Historical Record of the Third and Fourth Battalions of the Worcestershire Regiment. 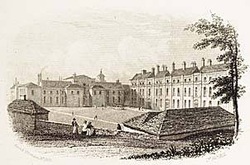 Colewort Barracks, to give the military base its proper name, was said to “extend some hundred feet, presenting a fine range of buildings, three stories high, having in front a parade-ground of large size […]”. It was situated within the fortifications of what is now known as Old Portsmouth, to the north of Warblington Street. I hope that its buildings provided comfortable accommodation for the soldiers who inhabited them, as they were home to the Worcestershire Militia not only for the remainder of 1812 but right through 1813 too!

As we have seen, detachments of the regiment spent periods time away from Colewort performing other duties. Marine duty aboard ships in the harbour continued, with detachments – which may have included James Atcherley – known to be engaged in this in December 1812 and October 1813. “At this period,” wrote the above-quoted author Robert Holden, “no less than nine thousand prisoners of war were confined on board fourteen of H.M. ships in Portsmouth Harbour alone.” 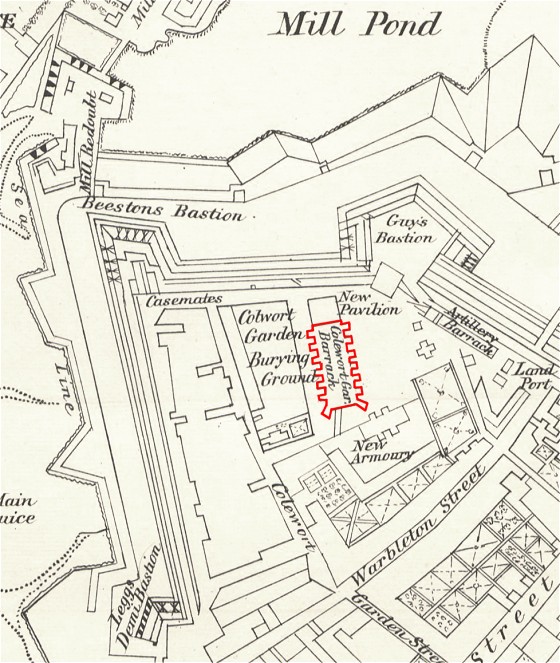 The wars in which the aforementioned prisoners had been taken were of course those against Napoleon Bonaparte. The struggle had entered a new phase in December 1813 following Napoleon’s defeat in Russia. Encouraged by this development, Prussia, Sweden, Austria, and several German states re-entered the fray and the War of the Sixth Coalition began. The UK’s militia units however, including that of Worcestershire, was confined to home duties. Despite this, James Atcherley still saw a little unwelcome ‘action’.

‘The enemy,’ in the form of the French and their allies, may not have been in a position to pose a threat to Lieutenant James Atcherley – but the same could not be said of one of his own ‘brothers’ in arms. The following report regarding one of James’s subordinate officers, Ensign Charles Catmar, was published on 7 July 1813 “by command of H. R. H. the Commander in Chief”:

There was another, happier development in the life of James Atcherley in (or possibly just before) March 1813: the birth of his first child. Hannah Mary Atcherley, named for her paternal and maternal grandmothers, was born around the beginning of that month and baptised on the 29th, at Upton Magna in Shropshire. The baptism register shows the family’s abode as Portsmouth, which suggests to me that James’s wife Mary was living with (or close to) him. Was Hannah born there, then taken to Shropshire later in the month (perhaps when James could get leave of absence) to be baptised at the church local to her mother’s family? Or did Mary return to her parents’ home at Haughton (see map below) before the birth, and if so did James follow later (after the unfortunate incident with Ensign Catmar)?

My questions don’t end there. Sadly for James and Mary Atcherley, Hannah died when she was just 9 weeks old. She was buried on 11 May 1813, not at Upton Magna but in the neighbouring parish of Ercall Magna, at High Ercall St Mary & All Saints. Her abode was recorded as Haughton, which indicates that mother and child remained at that place after Hannah’s baptism. Again, was James there, and if so, was that because he had returned to Shropshire for his daughter’s birth or baptism and remained, on leave, or had he only been granted leave for his daughter’s funeral?

Wherever Hannah was born, and whether or not James was with Mary at the time of Hannah’s birth, baptism, death or burial, this must have been a real low point in the lives of this young Atcherley family.

Robert Holden stated that “[at] the end of [1813], when Europe was making a supreme effort to complete the ruin of Napoleon, [Britain] proposed to co-operate in the general movement by sending over a large army, comprising some thirty thousand Militia infantry, who were to serve as Militia with their own officers under the Duke of Wellington.”

This required new legislation, and 54 Geo. III c. 1, “An act to enable his Majesty to accept the services of a proportion of the Militia out of the united kingdom, for the vigorous prosecution of the war” was duly passed in November 1813. Amongst the Act’s provisions was one empowering the King “to form the militia for extended service into provisional regiments or battalions” and one which entitled militia officers who volunteered for extended service in such units to receive half pay on the termination of that service. For ‘the King,’ of course, read ‘the Prince Regent’ (pictured below), acting monarch in the latter stages of George III’s reign (and for ‘the Prince Regent’ perhaps read Lord Liverpool, the Prime Minister).

137 men of the Worcestershire Militia volunteered for extended service, along with 12 officers from the ranks of Ensign right up to Colonel. Among the latter was Lieutenant J. Atcherley, who (along with Lieutenants Beale and Rudge, and Ensign Hobro) obtained commissions in the 1st Provisional Battalion of Militia.

I will now hand you back to Robert Holden’s narrative:

The proposal of the Government to reinforce the Peninsula army 1814 with 30,000 Militia infantry was […] abandoned, but advantage was taken of the Act of Parliament to send out to the Duke of Wellington a brigade composed of three strong provisional battalions of Militia. The brigade was commanded by Major-General Sir Henry Bayly, G.C.H., late Coldstream Guards, and composed entirely of officers, non-commissioned officers, and men of the Militia.
The 1st Battalion was commanded by Colonel the Marquis of Buckingham, Royal Bucks Militia, whose regiment composed nearly half the battalion; the 2nd Battalion by Lieutenant-Colonel Edward Bayly, Royal West Middlesex Militia; and the 3rd Battalion by Lieutenant-Colonel Sir Watkin Williams Wynn, Bart., Royal Denbigh Militia, both of whose regiments formed a considerable portion of the battalions.
The 1st Battalion was organized at Haslar Barracks, the 2nd Battalion at Chelmsford, and the 3rd Battalion at Winchester Barracks; the uniform of all three being nearly alike—red, with blue facings and white braid.
The detachment from the Worcestershire Militia, consisting of Lieutenants James Atcherley, Charles King Rudge, and Thomas Beale, and Ensign Edward Hobro, and one sergeant, seven corporals, and 125 privates, joined the 1st Provisional Battalion on February 13 at Haslar. The Royal Bucks men were already there, and formed the nucleus of the battalion; but the detachments from the other regiments composing the battalion—Northampton, Wiltshire, and a small party from the 1st and 2nd Surrey combined—joined a little later. The total strength of the 1st Provisional Battalion, exclusive of officers, was 23 sergeants, 23 corporals, 14 drummers, and 909 privates.

The charge of the late brigade

To begin with there was great uncertainty as to which part of Europe the Militia Brigade would be dispatched in 1814. An initial order to sail for the Peninsula was replaced by one specifying Bergen op Zoom in the Netherlands, where a French garrison was based. This order too was revoked however. The unsuccessful siege of Bergen op Zoom on 8 March 1814 led to 2,100 British troops being killed, wounded or taken prisoner by French forces which were well-positioned and supported by the local population.

Finally, the brigade was ordered to the south of France and its three battalions “embarked at Portsmouth about March 14, in the transports Camden, Cornwallis, and Dartmouth, convoyed by the frigate Hyperion.” Lieutenant James Atcherley and all who sailed with him no doubt had high hopes of playing their part in the defeat of Napoleon. Those hopes were to be dashed however. Robert Holden again:

After some slight adventures, such as the Hyperion running on the rocks close to the Needles, and a very stormy passage through the Bay of Biscay in a fearful thunderstorm, the fleet arrived safely off the mouth of Garonne early in April, and three or four days later sailed up the river as far as the village of Royan. A great disappointment awaited the brigade here, as it was reported that hostilities had ceased; indeed, it was afterwards said that a countermand had arrived at the Isle of Wight the day after the fleet had sailed.

While the Militia Brigade had been at sea, the Battle of Paris had been fought and won (on 30-31 March 1814) by the Sixth Coalition of which the United Kingdom was a part. The defeated Napoleon was forced to abdicate and was later exiled to the island of Elba. 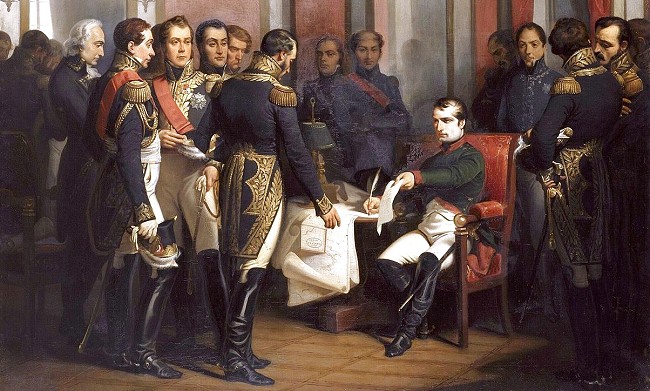 The abdication of Napoleon Bonaparte

> On to Lieutenant James Atcherley: Too late at Toulouse.

Picture credits. Colewort Barracks: Public domain image from Wikimedia Commons. Map showing location of Colewort Barracks in Old Portsmouth, 1762: From a map in Extracts from Records in the possession of the Municipal Corporation of the Borough of Portsmouth published 1891, taken from the British Library Flickr photostream; no known copyright restrictions. Map showing location of Haughton, Shropshire: Extract from Ordnance Survey one-inch England and Wales map sheet 152 published 1899 (surveyed 1880-82), Crown Copyright expired; reproduced with the permission of the National Library of Scotland under a Creative Commons licence. King George IV: Cropped from an image © The National Portrait Gallery, item NPG 123, and shared under a Creative Commons licence. The abdication of Napoleon Bonaparte: From a painting after François Bouchot dated 1843; adapted from a public domain image taken from Wikimedia Commons.