Today, the surname Atchley occurs most frequently in America. In Putting the genes into genealogy – Part 3 I revealed that there are American Atchleys who share their ancestry with British-born Atcherleys. Might this help to prove that the Atchleys of south Shropshire were related to the Atcherleys in the north of that English county, and that their descendants are all part of the same family tree? Possibly, if we could also find one or two Atchley men, UK natives known to be descended from Atchley ancestors in Shropshire, who would be willing to join the Atcherley DNA project. 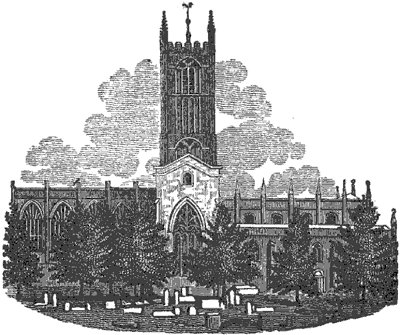 Mrs Love Atchley is one of the gems I have found during a few days of intense research into the Atchleys of England. The aim of my research has been to find out whether or not present-day English Atchleys do indeed have roots in Shropshire. I won’t keep you hanging on for the outcome – I believe they do. At the base of my English Atchley family tree are John Atchley (born around 1700) and Rebecca Beddoe (baptised 8 September 1703 at Bitterley), who were married at Ludlow St Laurence (pictured here as it appeared in 1856) on 7 October 1728. It was probably their son Francis Atchley (baptised 12 May 1743 at Ludlow) who is recorded as marrying Love Gough (and changing her name into something that sounds like a Richard Curtis movie) at Bath, Somerset, on 4 October 1775.

My mini-ONS (One Name Study) began with pulling together a few key data sets, particularly the General Register Office birth, marriage and death records from 1837 to the early 2000’s. This brought home to me just how rare the surname Atchley is in England. Over the course of 170 years, just 87 Atchley births, 76 deaths and 66 marriages were registered in England – and some of those did not relate to ‘real’ Atchleys (two marriages, for example, were for Atcherley sisters whose surnames became corrupted). These numbers are even smaller than those for the uncommon Atcherley/Atcherly surname (334 births, 284 deaths, and 229 marriages registered).

With these records set out in spreadsheets for ease of reference, I began to build an Atchley family tree at Ancestry starting with two Atchleys who were born right at the beginning of the 2000s. Before long I was back into the years for which digitised censuses and parish registers are available. With the help of these additional records (many of which were conveniently flagged up by Ancestry as ‘hints’) I got back to the Atchley sibling’s 4x great grandparents, William Henry Atcherley (born around 1810 at Walworth, Surrey) and Sarah Scatcherd Urmston Waldegrave (born 1 November and baptised on Christmas Day 1810 at Bishopsgate). 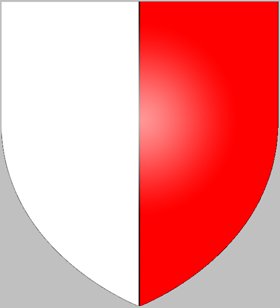 Sarah, who wed William in London on 19 February 1835, was almost certainly part of the prominent Waldegrave family descended from Sir Richard Waldegrave, Speaker of the House of Commons from 1381 to 1382 (the family coat of arms is shown left). Sir Richard’s descendants have included Baronets, Barons and Earls (see Earl Waldegrave at Wikipedia), and William Waldegrave, Viscount Chewton (1815–1854). This would explain why Sarah and William Henry Atchley’s youngest son (born in 1850) was named Chewton, and why the surname Waldegrave was given as a forename to so many of their descendants (beginning with their first-born son, William Waldegrave Atchley).

William Henry Atchley was a Government Clerk when the census of 1841 was taken, a position clarified as “Clerk in H M Treasury” ten years later and again in 1861. By 1871, when he was aged 60, William’s occupation was recorded as “Retired Civil Service” (and that of his son Chewton, aged 21, as “Clerk Government Department”).

William’s eldest son William Waldegrave Atchley also became a civil servant, and was recorded as such in the ‘National Probate Calendar’ of 1890, in which he appeared as William senior’s executor. William Henry Atcherley had died at home, 32 Bickerton Road, Holloway, on 24 October 1890, leaving a personal estate of £70. Although he did not leave much in the way of money, William Henry Atchley left a valuable living legacy – a branch of the family which has inhabited London and other counties in southern England and perpetuated his surname to the present day.

What of William’s ancestors though? For a while, William Henry Atchley was a ‘brick wall’ as I could not immediately find a record of his baptism. So I started looking for other Atchleys born at around the same time and place (early 1800s, London area) in the hope that I would find his parents. The next family to join my Ancestry tree was therefore that of John William Atchley and his wife Rebecca, parents of Mary Elizabeth, Harriet and Sophia Atchley; the girls were baptised at Westminster in 1811, 1812 and 1814 respectively.

John and Rebecca did not turn out to be William Henry Atchley’s parents, but they were nonetheless of great interest. John William Atchley married Rebecca Sambrooke at St Pancras Parish Chapel on 2 July 1805. According to the marriage register, John was a bachelor and Rebecca a spinster – but I soon discovered that in Rebecca’s case, the official record was wrong.

The first clues regarding the error in the above marriage record were contained in last will and testament of “John William Atchley of Vigo Lane Gentleman”. The will was dated 6 December 1815 and proved on 16 March 1816 at the Prerogative Court of Canterbury (John, who died at the age of 30, was buried at Bloomsbury St George on 27 January 1816). In his will, John mentioned “my beloved wife Rebeccah Atchley” and “my two children Harriet & Sophia Atchley” (daughter Mary Elizabeth Atchly had died in infancy and was buried, also at Bloomsbury St George, on 28 July 1811). John also appointed as Trustees and Guardians of Harriet and Sophia, “my brother Abraham Atchley of Oxford street and my sister Juliana Sophia Atchley of Calne”. And then John mentioned “my son & daughter in law Thomas Godfrey Sambrook & Sarah Mary Rebecca Sambrook”.

The terms used in older wills to describe relatives don’t always tally with those we use today. So I was not surprised to learn that John’s “son & daughter in law” were in fact his step children, his wife Rebecca’s offspring from her first marriage. What did surprise me was his wife’s true identity, which was revealed by the record of that first wedding (to Jeremy Sambrooke, at Bloomsbury St George on 15 September 1794). Her maiden surname was Atchley! 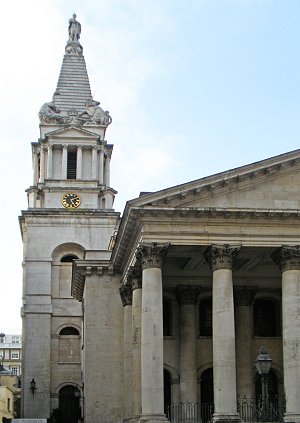 Two of the three witnesses who signed the marriage register were Wm Atchley and Charlotte Atchley. I was quickly on their trail and found baptism records for all three Atchleys, plus their brother John. The ceremonies all took place at the now rather familiar church of Bloomsbury St George (pictured right) from 1773 to 1782, with the parents of these four Atchley children named as William and Sarah. After adding William to my growing Ancestry tree I found his will of 1799, which confirmed the information I had gathered about his family: his wife was Sarah, his sons were John and William Atchley, and his daughters were Charlotte Atchley and Rebecca, wife of “Jeremiah Sambrook of Vigo Street Bloomsbury”. William had opened his will by describing himself as “William Atchley of High Holborn Coal Merchant”.

The fact that William had named one of his daughters Rebecca suggested to me that he was the “Wm Son of Jno Achley & Rebecca” baptised at Ludlow in Shropshire on 15 June 1748 – the John Atchley and Rebecca Beddoe who were married at Ludlow on 7 October 1728. When I looked for their marriage in the digitised version of the original parish register at Findmypast (looking at the original records rather than relying solely on indexes is always worthwhile), I could not help but notice the other couple who tied the knot at Ludlow on the very same day. The register recorded the nuptials of “Jeremiah Sanbrooke & Mary Wall of ye [parish] of Fryers [=Priors] Ditton”. The Priors Ditton parish register later recorded the baptism of “Jeremiah Son of Jeremiah Sandbrook & Mary his wife” on 14 September 1740 – the Jeremy Sambrooke who went on to marry Rebecca Atchley.

So it would seem that the families of Atchley and Sambrooke were very close. Finding the will of Jeremy Sambrooke junior (dated 21 September 1799 and proved 6 November 1799) reinforces this supposition. Not only did Jeremy make bequests to his “dear wife Rebecca Sambrooke” and his “Brothers and Sister in Law John Atchley William Atchley and Charlotte Atchley”, he also described himself as “Jeremy Sambrooke of Campden Town in the County of Middlesex Coal Merchant” – the same business that his father-in-law William Atchley senior was in.

Time to tie up some loose ends. Remember my ‘brick wall’ William Henry Atchley? His elusive baptism record turned up. Although other records indicate that he was born around 1810, he was not baptised until 10 December 1820! The baptism register recorded his date of birth (29 September 1810), but Ancestry has not included that information in its index. The register also shows that William Henry’s father, William Atchley, was a coal merchant – he was in fact the brother of the aforementioned Rebecca, Charlotte and John. This links the Atchley siblings born at the beginning of the 2000s to John Atchley and Rebecca (née Beddoe), their 7x great grandparents.

Abraham Atchley, son of John and brother of John William, who was living in London’s Oxford Street when John William Atchley made his will in 1815, later returned to Calne. There, he ran a successful drapery business – and started the West Country branch of the Atchley family, which included solicitors, servicemen, and a surgeon, not to mention ladies who volunteered with the British Red Cross during the First World War.

The father of these Atchleys of Calne, John, was 86 years old and “greatly respected” when he died in April 1821 according to the Salisbury and Winchester Journal of the 23rd of that month. I have not found a burial record to cross-check his age at death, but it seems likely that he was the “John Son of John Ashley [= Atchley] & Rebecca his Wife” baptised at Ludlow in Shropshire on 7 April 1733. So when John William Atchley wed Rebecca Sambrooke (née Atchley), he was marrying his first cousin. 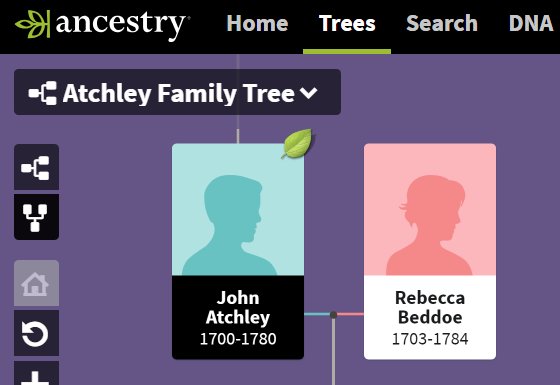 It would be great to trace this family’s roots back further, adding the ancestors of John Atchley of Ludlow, and perhaps linking up the Atchleys with the Atcherleys. Unfortunately John is now the ‘brick wall’ of the Atchleys of England because – yes, you’ve guessed it – I have yet to find a record of his baptism. One of the problems in tracing the family further back in time is the fluidity in the spelling of the surname in the early 1700s and beyond. As we have seen, this was written as Ashley (when John’s son John junior was baptised) and Achley (when John’s son William was baptised). When John’s son Francis was baptised, Atchley was written as Achtley, and the baptismal record for John’s daughter Mary gives the family name as Atshley! The only baptism record in which the modern spelling of Atchley was used was that of John’s other daughter Anne.

Combined with the issue of spelling variations is the fact that Atchleys were present not just in south Shropshire during and prior to the 1700s, but also in and around London where there were also Ashleys and Atcherleys whose surnames were also written in a variety of ways. Add to this the facts that (1) not all baptisms, marriages and burials were recorded, (2) records of those which were committed to paper or parchment have not all survived, and (3) not all surviving records have been indexed / transcribed / put online, and you get an idea of the difficulties.

DNA however – specifically DNA on the Y chromosome which is passed from father to son (usually, but always, with the father’s surname) – could prove (or disprove) the possible link between England’s Atchley and Atcherley families. So if you are an English Atchley man, willing to take a cheek swab for a Y-DNA test (at my expense), please make contact. Or if you know of an English Atchley man who might be up for this, please put them in touch with me.