The above extract from the 1919 edition of The County Families of the United Kingdom shows that by, or (more likely) some time before the end of the First World War, Muriel Hope Atcherley [

] was married to Dr Henry Hemsted [

], had a daughter – and was resident aboard the Hospital Ship Ebani. What it does not reveal is that although Muriel was “of Marton Hall, Shropshire” and of other properties she had inherited from her Atcherley forebears, she never lived in them, and that with her husband she had left England in 1914 intending to make a permanent home in one of Britain’s African colonies. Let’s go back to the beginning of Muriel’s story and retrace her journeys in England and Wales, to Canada and the USA, and into – and out of – Africa. 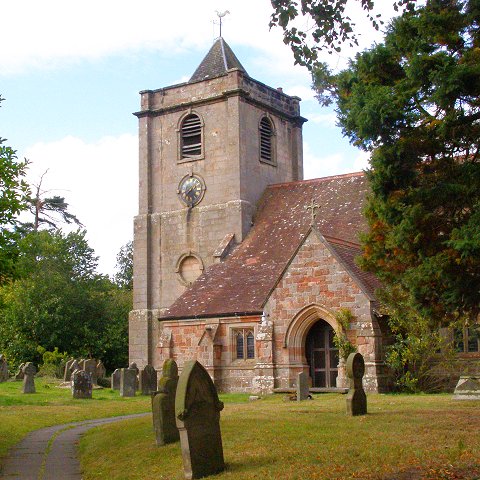 Hope Atcherley was the only child of Francis Robinson Hartland Atcherley, a Captain with the Militia (3 Battalion Shropshire Light Infantry), and his wife Esther Hodgson (nee Mills). She was born in the summer of 1890 at her parents’ residence, Stone House, Sutton, in the Shropshire parish of West Felton, and was baptised at the parish church of St Michael (pictured right) on 7 August that year. The family was enumerated at Stone House on the 1891 census, along with their five servants: a sewing maid, a cook, a nurse, a housemaid and a groom.

From the Rhyl Journal we learn that in September 1893, Muriel accompanied her parents during their visit to that resort town on the north coast of Wales. Her father had spent a part of his childhood there, living with his maiden aunts Emma, Elizabeth and Anne Atcherley at their home in Russell Road. Elizabeth and Anne were still living there in 1893, as was their brother, Captain William Atcherley Atcherley. No doubt all three were glad of the chance to see their nephew, his wife, and three-year-old Muriel.

returned to Rhyl five years later, in September 1898, but not with her parents. This time she was in the company of her uncle Richard Topping Beverley Atcherley, aunt Caroline Mary Wynne Atcherley (nee Ffoulkes) and cousins (Richard and Caroline’s daughters) Mary Elizabeth Hope Atcherley and Hester Mary Eleanor Atcherley. In the years since her previous trip to Rhyl Muriel had lost her father Francis, who had died in 1895 aged just 30 (his gravestone at Middle St Peter’s is pictured right). She had also gained a stepfather when her widowed mother Esther married Walter Bertie William Vernon (of Hilton Hall in Staffordshire) in 1897. In 1900 she gained a stepbrother, Richard Leveson Vernon.

If we rely solely on the census, it might appear that Muriel Atcherley did not spend much time with the Vernon family she became a part of. In 1901, while Walter, Esther and the infant Richard Vernon were living at The Grange in Welsh Frankton, Shropshire, Muriel was boarding in the household of clergyman William Leeke and his family at the Abbey Foregate Vicarage in Shrewsbury. She does not appear at all on the 1911 census as far as I am aware. It is however important not make too many assumptions based on census records, particularly those which show people living apart from their families.

Census records show where our ancestors were, with whom they were residing and (where applicable) what they did for a living, on just one day in every ten years. They therefore provide a picture of people’s lives which is far from complete. Muriel was probably boarding in Shrewsbury in 1901 while attending school there. Letters which she sent to her stepbrother Richard in later life suggest that the two were close. The 1911 edition of The County Families of the United Kingdom gave Muriel’s address as The Grange at Welsh Frankton, the home which she undoubtedly shared with her mother, stepfather and stepbrother. As for Muriel’s no-show on the 1911 census, that was probably due to an event which took place on 29 March that year at St Margaret’s in Westminster. On census night, 2/3 April 1911, the newly-married Muriel Hope Hemsted would almost certainly have been on her honeymoon.

Muriel’s husband, Dr Henry Hemsted, who was born in 1878 in Whitchurch, Hampshire, shared both his name and his profession with his father. He was registered with the General Medical Council on 3 November 1899, in which year he was admitted a Member of the Royal College of Surgeons, England, and a Licentiate of the Royal College of Physicians, London. I have not found him on the 1901 census but this might be explained by his attending the University of Brussels at that time, where he obtained the M.D.(Brux.) qualification.

In 1909 the British Medical Journal carried a short communication on the treatment of a case of tuberculosis, written by Henry Hemsted, M.D.Brux, M.R.C.S., L.R.C.P. Henry was then living at Purewell Hill in Christchurch, Hampshire, situated just over the county border from Bournemouth, Dorset. He was still there in 1911, the year of his marriage to Muriel, and the year in which the couple’s first child, Rupert Henry A Hemsted, was born – and died.

“But what of Africa?” I hear you ask. Henry and Muriel Hemsted first travelled there in 1912, departing from Southampton on 27 December aboard the Gaika. They were contracted to land at Mombasa. It was not their intention to stay for more than a year in what was then the East Africa Protectorate (or British East Africa), and indeed they returned to England in 1913. Not long afterwards, their daughter Elizabeth Gay Atcherley Hemsted was born in Dorset.

Henry and Muriel’s next sea voyage began on 6 May 1914, from Avonmouth, however their destination was not Africa but Canada. The passenger list for the Royal Edward (the ship is pictured above) shows Dr Henry Hemsted, 36, doctor, and Edith Hemsted, 24. Which just goes to show that you can’t always rely on those who compiled the lists to get their passengers’ names right! The passenger list for the Princess Adelaide, arriving at Seattle, Washington, USA on 20 September 1914 from Victoria, Canada, was more accurate, recording Henry Hemsted, M.O., age 36, and Muriel Hemsted, 25.

In fact, the list showed even more information: Henry was 5 feet 10½ inches tall, with a dark complexion and blue eyes, while Muriel’s height was 5 feet 6 inches, her complexion fair, and her eyes grey. Both were in good physical and mental health, neither of them had been to the USA before, and neither of them was a polygamist or an anarchist! Their ultimate destination, after what seems to have been an extended holiday, was Whitchurch, England, where they were to join Henry’s father. They did not remain long in England after their return however.

On 5 December 1914, Surgeon H Hemsted, 37, and Mrs Hemsted, her age wrongly recorded as 34, set off from London aboard the Briton, bound for Cape Town. Henry then enlisted with the South African Medical Corps, and this is how he – and, it would seem, Muriel – ended up on the Ebani. At this point I will let Major-General Sir W G McPherson (whose History of the Great War was published in 1921) take up the story:

When war was declared, the mobilization of an expeditionary force for operations against German South-West Africa was commenced. Cape Town was to be its main base, and mobilization camps were prepared at various places on the Cape Peninsula. The forces mobilized, however, were entirely Union forces and did not come under the command of the Imperial military authorities. But considerable work was thrown on the Imperial senior medical officer in connection with them. Large increases in hospital accommodation became necessary. The military hospital at Wynberg was expanded into a general hospital, a second general hospital was established at Maitland, a suburb of Cape Town, and a hospital transport, the ‘City of Athens,’ and a hospital ship, the ‘Ebani,’ organized. The latter was equipped under the directions of defence headquarters and the official advisory committee on voluntary aid, with additional comforts from the South African Red Cross Society. The personnel was obtained from the South African Medical Corps. On the termination of the German South-West African campaign the ‘Ebani’ was transferred to the Imperial authorities, and was used as a hospital ship in various places. Those of its staff of South African Medical Corps who remained on board were transferred to the R.A.M.C.

Sure enough, the London Gazette shows Major H. Hemsted of that Corps becoming a temporary Major in Britain’s Royal Army Medical Corps in August 1915. Within two months the Ebani was operating in the hazardous waters of the Mediterranean. A close encounter with the enemy took place on the last day of that month, after a German submarine sunk a nearby cargo steamer. The sub then approached the Ebani, but on being shown the ship’s list by the medical officer, the Germans allowed the hospital ship to proceed on its way and pick up the crew of the sunken steamer, who had been given time to escape in lifeboats. A New Zealand serviceman on board the Ebani later said “the hospital ships are painted so that no mistake can be made, and there is no doubt it was only the Red Cross that saved us.”

It is believed that over the course of World War One the Ebani travelled over 200,000 miles and carried 50,000 sick and wounded. However, Henry and Muriel did not spend the whole of the war aboard that ship. Henry’s paper A Combined Embarkation and Boat Distribution Scheme: for Hospital Ships and Ambulance Transports, published in The Lancet in September 1918, was credited to Henry Hemsted, M.D. Brux., M.R.C.S., L.R.C.P. Lond. (Temporary Major, R.A.M.C.); o.c. Troops, H.M.H.S. “Neuralia.” The Ebani was serving off the coast of Tanzania in 1917-18 so the Hemsteds must have switched ships before she departed European waters. The Neuralia meanwhile had served in the Mediterranean during 1915 before returning to Britain in 1916. She remained as part of the Home Fleet until September 1918, after which she acted as an ambulance transport ship until July 1919. It was probably while serving on this ship that Henry Hemsted was mentioned in despatches (apparently this was ‘Gazetted’ on 7 March 1918, but I have been unable to find this in the online version of the London Gazette). 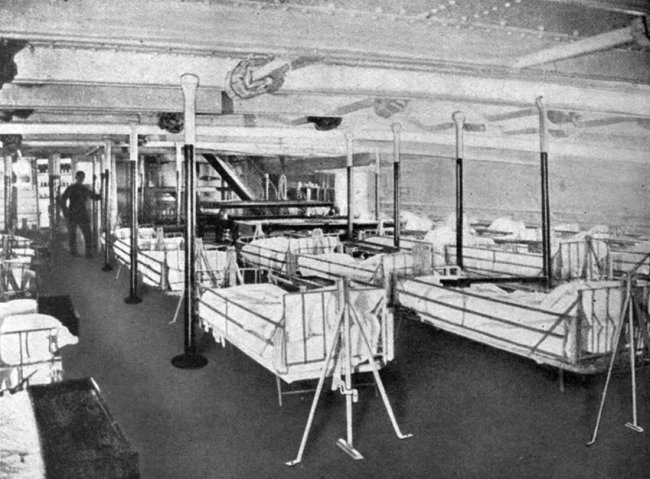 A ward on board HMHS Ebani

The Neuralia then resumed her pre-war career, ferrying passengers to and from East Africa. Henry and Muriel Hemsted may well have been among the passengers on her first voyage back to that part of the world. Certainly, the couple were living in Nairobi by the middle of 1919, and were resident at Ngong, about 22 km south-west of Nairobi, from 1920, after which they spent most of the rest of their lives firmly rooted in Africa. At Ngong, Henry and Muriel became part of a scattered community of European settlers, one of whom later included Henry in the book she wrote about her experiences. Its title was Out of Africa.

> Forward to Muriel Hope Atcherley: In and Out of Africa – Part 2

Picture credits. West Felton St Michael: © the author. Gravestone of Francis Robinson Hartland Atcherley: © the author. RMS Royal Edward: public domain image taken from Wikimedia Commons. HMHS Ebani, in dock: The Guardian Witness, via Wikimedia Commons, cropped and used under a Creative Commons licence. Ward on board HMHS Ebani: from W G McPherson (1921), History of the Great War based on Official Documents, Volume I, facing page 333. Publication not in copyright according to the Internet Archive website.