There is a belief, fairly widely held today, that “Children should not die before their parents.” Yet for most of human history, right up until relatively recent times, children predeceasing their parents (mainly as infants, but also as adults) was commonplace. One mother who witnessed far too many burials of younger family members was Dorothy Atcherley, née Whitney. She passed away at the age of 88, in 1792, having outlived all of her children (at least ten and possibly twelve in number), her husband, one of two sons-in-law, all three daughters-in-law and two (possibly three) of her seven grandchildren. 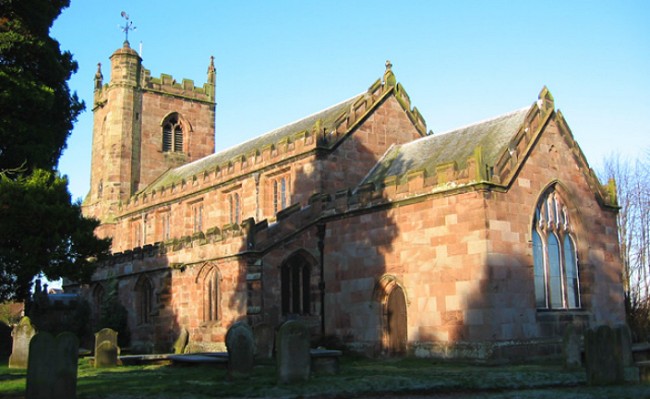 The long life of Dorothy Atcherley began in Cheshire in, or possibly a little before, 1704 – “Dorothy daugr. of Robert Whitney of Newhall” was baptised at Wrenbury, in the parish church of St Margaret (pictured above), on 18 April that year. Newhall, nowadays a parish in its own right, was then a township within Wrenbury parish. And within Newhall was Coole, the seat of the Whitney family. An ancient seat it was too, as property (a house and 100 acres of land) was first acquired there by Howell de Whitney in 1289.
It appears that Dorothy had at least a dozen siblings, eleven of whom where named in her father’s last will and testament of 3 February 1726. “Robert Whitney of Cool in the County of Chester gent:” gave all his real and personal estate to his eldest son Hugh, and bequeathed £100 apiece to ten of his other eleven children, namely Katherine, Robert, Ann, Thomas, Margaret, Peter, Mary, Jeffery, John and William.

Robert’s wife, Dorothy, and his daughter of the same name, were presumably already provided for under the terms of their respective marriage settlements. Wife Dorothy was only mentioned in Robert’s will as a joint executor with son Hugh, while daughter Dorothy – by then Dorothy Atcherley – received just one shilling.

“Thomas Hatcherley [sic] Gent. of Malpas & Dorothy Whitney Spinster of Hampton in the parish of Malpas afforesd.” were “Married ye fourth day of July” 1722 at Acton in Cheshire “By Vertue of A Licence Granted by ye Revd. Mr. Thomas Brooke Rector of Nantwich.” That licence was granted after a bond was entered into by Francis Sanders and Richard Turner, the conditions of which were set out in the standard pre-printed text of the time with the more interesting personal details (the words in italics in the following transcript) added by hand:

THE Condition of this Obligation is such, That if there shall not hereafter appear any Lawfull Lett or Impediment, by reason of any Pre-contract, Consanguinity, Affinity, or any just Cause whatsoever; But that Thomas Atcherley of ye Town & parish of Malpas in ye County of Chester & Dorothy Whittney of Hampton in ye Parish of Malpas aforsd may Lawfully Marry together; And that there is not any Suit depending before any Judge Ecclesiastical or Civil, for, or concerning any such Pre-contract; And that the Consent of the Parents, or others the Governors of the said Parties be thereunto first had and obtained; And that they cause their said Marriage to openly solemnized in the face of the Parish-Church of Malpas or Nantwich or Acton between the Hours of Eight and Twelve of the Clock in the Forenoon; And do and shall save harmless, and keep indemnified the above-named Right Revd Father in God his Vicar Genl his Surrogates, and all other his Officers, and Successors in Office, for and concerning the Premises; That The this Obligation to be Void and of none Effect, or else to remain in full Force and Virtue.

Dorothy had married into a family of landed gentry as prominent in its own locality as her Whitney kin were in their part of Cheshire: the Atcherleys of Marton in Shropshire. Occupying the family seat of Marton Hall at that time were her new in-laws, Richard Atcherley and Elizabeth, née Lloyd. Dorothy was to be a part of this family for very nearly 70 years, and she would be crucial to its survival. The first of these two facts she could not have known, but I suspect she was very much aware of the expectations the Atcherleys had regarding her role in perpetuating their family line.

Richard and Elizabeth Atcherley of Marton had produced only two children. The baptism of their eldest child Thomas, Dorothy’s new husband, had taken place at Myddle St Peter on 6 April 1704 (just 12 days before Dorothy’s own baptism at Wrenbury). Their youngest child, a second son named Richard after his father, was baptised there on 30 October 1705. Of these two sons, Thomas was the only one to marry, which meant that the future of the Atcherleys of Marton rested solely with him and Dorothy.

The couple certainly did their best. The Burkes, in their Genealogical and Heraldic History of the Landed Gentry, named seven children born to Thomas and Dorothy – Thomas, Dorothy, Elizabeth, Robert, Richard, Jane and Thomasin – and added that there were also five other children who all died as infants. 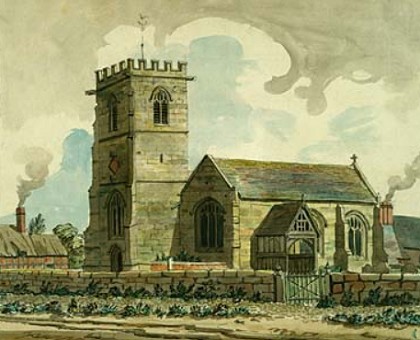 To these infant/child deaths we can add Jane and Thomasin, two of the seven children named by the Burkes. The burial of “Jane Atcherly, a child” – whose baptism, if one took place, I have not found a record for – took place at Myddle on 16 March 1738/9. Thomasin was baptised at Myddle in June 1736, and “Thomasin Atcherley, a child” was buried there on 24 April 1739.

In addition to these five fatalities there were perhaps two more. I have found no records for two of five unnamed children mentioned by the Burkes as having died in infancy, but that doesn’t necessarily mean the children didn’t exist. While I suspect the genealogical and heraldic historians may have been in error (they did get things wrong from time to time), it may be that ‘official’ records for the children were not created or have not survived. Or they are out there somewhere and I simply haven’t found them (I’m not infallible either!).

There are gaps between the baptisms on record for Thomas and Dorothy’s other children in which additional births may have taken place. Given the rapid rate at which Dorothy seems to have been generating potential Atcherley heirs, there is scope for her to have given birth to one or more children during the course of the following years: 1724, 1725, 1737, and 1738. The above-mentioned Jane was most likely born in one of those years, and maybe the ‘lost’ children appeared in two of the others.

As my introduction to this story makes clear, Dorothy witnessed many deaths over the course of her lifetime. The death of Thomasin Atcherley in April 1739 however, marked the end of a period of particularly concentrated loss. Of the ten (or maybe twelve) children she had brought into the world since her marriage to Thomas Atcherley in 1723, five (or quite possibly seven, if she did indeed have twelve children) had perished. To make matters worse, her husband also departed this world for the next towards the very end of that period, in December 1738.

Before the wonders of modern-day science, death was very much part of life. Fate was fickle and people could succumb to accident or particularly to disease at almost any time. It has been estimated that the rate of infant mortality (deaths in the first year of life) was around 140 in every thousand live births, compared with under 5 per thousand in 2015 (in the UK). Average life expectancy was between 30 and 40 years for most, although that includes the impact of infant mortality. Did our ancestors’ familiarity with death make it any easier for them to deal with the loss of their loved ones? 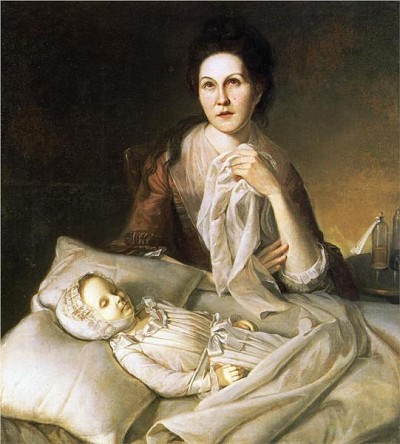 The customs around mourning have certainly changed as the centuries have gone by, but I suspect that the passing of all that time has made little difference to our internal, emotional responses to the death of those we love. This seems to be borne out by research which, according to Mia Korpiola and Anu Lahtinen (writing in 2015), “has indicated that bereavement and the death of one’s children, spouses and close relatives led to melancholy and depression for medieval and early modern people just as now.” (The portrait shown here, titled Rachel Weeping and depicting a mother grieving over her dead child, dates from 1776.)

The strong religious beliefs held by many people, which told them that death was God’s will but also gave them hope of an afterlife in which they would be reunited with those who had gone before them, also helped to soften the blow of bereavement. The authors who I have just quoted also stated that “the hope of a reunion in Paradise and the religious doctrines provided consolation. Resignation in the face of death was a strategy of coping with inevitability.” My guess is that Dorothy Atcherley’s Christian faith was very strong indeed, and went a long way towards helping her cope with the anguish she must have felt after losing her husband and so many of her children.

There were practical considerations for Dorothy to deal with as well as spiritual and emotional ones. She was now a widow with five offspring, aged from four to about twelve, to bring up. I am confident however that she was not left to face that challenge alone. She had two Atcherley parents-in-laws who I am quite sure took an active interest in her welfare and that of her children – their grandchildren and heirs.

Dorothy’s late husband had also provided for her. Foreseeing his untimely demise he made his last Will and Testament on 19 October 1738 (he was buried, at Myddle, on 29 December that year, not on 27 July 1743 as stated by the Burkes – I did warn you they sometimes got things wrong!). The fact that two of the three witnesses to Thomas’s will were his brothers in law Thomas and Hugh Whitney shows that members of Dorothy’s family were actively involved in looking after her interests even before her husband’s passing.

I don’t doubt that Dorothy was grateful for whatever support she was offered. I hope that the family she married into was also grateful for the contribution Dorothy herself made to its success. It seems to me that she was a woman of great fortitude, strong in mind, body and spirit – qualities which would stand her in good stead as she kept a matriarchal eye on the next two generations of the Atcherleys of Marton.

> On to Of grief and longevity: The life of Dorothy Atcherley – Part 2