An email from a visitor to this website was all it took for me to rapidly revise my research route-map for the week. “I recently acquired an 1880s dress by ‘Oliver & Atcherley’”, wrote Simon Howard, who wanted to find out more about this particular business. Simon added: “The makers mark appears to have two royal crests alongside it and I was wondering if they were known as court dressmakers?” What better reason could there be for me to review the information I had on Oliver and Atcherley – the firm and the men behind it – and carry out some additional research to present the full story?

Label in Oliver & Atcherley dress, with the arms of Manchester (left) and Queen Victoria (right)

It all began with a man named John Satterfield. John was named after his father, who was a tanner in Wirksworth, Derbyshire. Knowing this, and having established an approximate birth year for John from his age when he died, I believe he was the “John Son of John Satterfield of Wirksworth” who was baptised in that parish on 22 June 1763.

By the middle of the 1780s John was the junior partner in what was presumably a firm of linen drapers. A notice confirming that his partnership with Samuel Smith had been dissolved on Christmas Day 1785, was published on 26 December that year – along with statements by both Smith and Satterfield. John’s statement read as follows:

J. SATTERFIELD,
RETURNS his most respectful Compliments and Thanks to his Friends who have favoured him with their Approbation and kind Attention, during his late Connexion with Mr. SMITH, and hopes in a short Time to have it in his Power to receive their future Favours, in the same Line of Business, which he will endeavour to merit by the same goodness and cheapness of Articles, and the same Assiduity to please, he has hitherto so happily exerted.
St. Ann’s Square, Dec. 25, 1786.

Mr Satterfield was a man of his word. In February 1787 he and Townshend Usher advertised the establishment of Usher and Satterfield, “Linen-drapers, Mercers, and Haberdashers,” announcing that they had opened a shop in Exchange Street in Manchester, “where they have just laid in a complete and very good Assortment of every Article in the above Branches, which they will sell on the most reasonable Terms.” This partnership did not last long, being dissolved on 28 September 1787, with John Satterfield stating “that he continues his Business as usual, and hopes for the same Support he has hitherto met with, as he is determined no one shall offer Goods on better Terms.” John was now trading on his own account and this, for me, was the beginning of the firm which would in time be known as Oliver & Atcherley.

Two years after he began trading under his name alone, John Satterfield moved his business to the place where he had been in partnership with Samuel Smith – the place which would remain the home of his enterprise for more than a century to come. The following notice appeared in the Manchester Mercury of 15 December 1789:

Manchester, St. Ann’s-Square, Dec. 14, 1789.
JOHN SATTERFIELD,
WHOLESALE and RETAIL,
DRAPER, MERCER and HABERDASHER,
BEGS Leave most respectfully to acquaint his Friends and the Public, that he has removed from Exchange-street, to his SHOP in St. Ann’s Square, where he has laid in, from the first Markets, every Article in the above Branches, which he will offer on as good Terms, as any House whatever, and endeavour to merit the same Share of Support from his Friends, which he has hitherto experienced, and for which he takes this Opportunity of returning his grateful Thanks.

Gradually, John expanded his range of articles and materials. In 1800 he announced that he had “engaged a large and choice assortment of Furniture Callicoes,” for the sale of which he had acquired a warehouse connected with his existing premises. It was another material however which brought John Satterfield to prominence, thanks to the Viscountess Lady Bulkeley of Cheshire, who introduced some even more distinguished customers to the business. The Chester Chronicle reported as follows on 22 January 1808:

THE QUEEN AND PRINCESSES.
We hear from indisputable authority, that her Majesty and the Princesses have, within these last four days, sent very considerable orders to their draper, Mr. Satterfield, of Manchester, for the article of Cotton Velvet, expressing at the same time, in the highest terms, their marked approbation of the great improvement which this branch of our manufacture has attained. At this particular juncture, it is to be hoped, that the example of our most gracious Queen and Princesses, in encouraging the manufactures of that populous town and neighbourhood, will be followed by every patriotic subject. […] 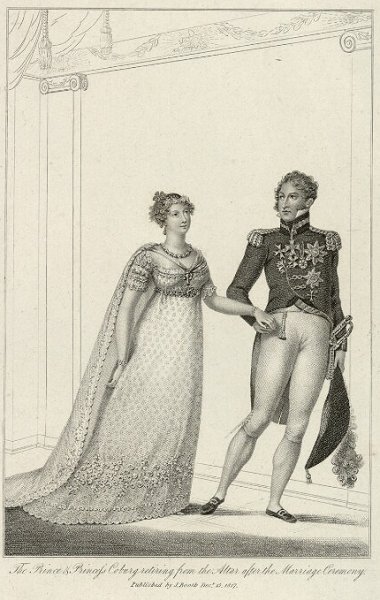 The Queen at that time was Charlotte of Mecklenburg-Strelitz, wife of King George III. The only legitimate grandchild of this royal couple was also named Charlotte, Princess Charlotte Augusta of Wales. In 1816, prior to her marriage to Prince Leopold of Saxe-Coburg-Saalfeld, the princess also took delivery of a very special item from John Satterfield. This report in the Manchester Exchange Herald was reprinted in many other newspapers:

It is an ancient British custom to make presents on bridal occasions. On the pending Royal Marriage, the custom has been revived, by two of the inhabitants of Manchester. The first, Mr. Satterfield, Linen-draper to their Majesties, has presented her Royal Highness the Princess Charlotte of Wales, with a dress of the Manchester Manufacture; and her Royal Highness’s gracious acceptance and admiration of the beauty and elegance of the fabric have been notified to Mr. Satterfield, through the medium of the Dowager Countess of Ilchester. […]

The picture here shows the prince and princess ‘retiring from the altar’ after their marriage. Five days after that happy event, John Satterfield passed away “in the 54th year of his age”. He had been in partnership with his son Joshua, and a John Underhill. Following the death of Underhill on 18 October 1816, Joshua Satterfield carried on the business “upon his own separate account” but under his late father’s name.

The firm’s  royal patronage continued. A bundle of house steward’s accounts from Dunham Massey Hall, dated 1822, includes a bill for linen from John Satterfield, Manchester, “Linen Drapers to their Majesties”. The royal ‘seal of approval’ was good news not just for Satterfield’s business, but also for others engaged in the trade in the Manchester area. Evidence for this can be found in a report published in the Manchester Herald in 1832 (and reprinted in other newspapers):

Silk Trade of Manchester.—It affords us much pleasure to notice the improvements carrying on in this branch of manufacture, and we are led this week to speak of it more particularly, in consequence of having seen a beautiful figured silk, the design and manufacture of Messrs Winkworth and Proctor, of George Street. Mr Satterfield (for whom we find it has been expressly made) sent last week to the Queen several specimens of the silk in question. Her Majesty appears to have been highly pleased with it, expressing her approbation, not less of the taste displayed in the drawing than of the skill evinced by the workman, ordering at the same time dresses of it, in two different colours, for her own personal use. 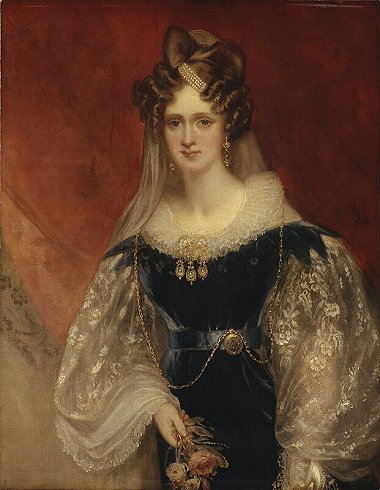 The queen in 1832 was Adelaide, wife of King William IV and formerly Princess Adelaide of Saxe-Meiningen; the portrait of her reproduced here dates from about 1831.

At the end of 1838, Joshua Satterfield decided that “in consequence of my health [no] longer enabling me to give the personal attention I could desire to my business,” he would “withdraw from it entirely”. His three assistants, John Bosworth, John Lambe and James Morris, took over the running of the business from 1 January 1839. This was an arrangement with which Joshua was entirely happy, his successors having worked with him for a period of many years (seven years in the case of the most junior of them). Their “honourable conduct throughout that time” had commanded Joshua’s “esteem and respect,” and he felt that they would continue his business in such a way that his departure would not be noticed.

Formal notices of this change were published in February 1839. Those notices, incidentally, showed that Joshua had in fact owned and managed not one but two companies, both trading from St Ann’s Square: John Satterfield and Company (linen drapers and silk mercers), and Cowper and Company (dealers in English and foreign millinery). Messrs Bosworth, Lambe and Morris took on both of these.

Although Joshua Satterfield had withdrawn from managing the company which bore his father’s name, he had not severed all ties with it. On his departure he had promised that he would, on behalf of his successors, “occasionally visit the Paris market.” He did more than that. When the intended marriage of Queen Victoria and Prince Albert was announced, on behalf of the company he “wrote to ascertain if her majesty would be graciously pleased to receive at his hands a specimen of Manchester manufacture”.

This offer was promptly accepted. Unfortunately, “Although efforts were made to produce this dress so as to present it previously to the royal marriage, yet it was soon found (the period for the solemnization of the royal nuptials taking place earlier than was generally supposed), that owing to the intricacy and labour of the workmanship, this would be impossible”. Hopes that John Satterfield and Company would be the makers of the wedding dress of the century were dashed. The royal wedding took place on 10 February 1840, and Victoria wore a white dress of silk satin made by Mary Bettans, with a deep flounce of Honiton lace designed by William Dyce.

In the following year, 1841, the first British census (for which the enumerators’ schedules have survived almost in their entirety) took place. The premises occupied by Satterfield & Co in St Ann’s Square in Manchester were not identified as such on this census. However, we can recognise them from the names heading the lists of people living at two of the square’s households.

The list for one such household began with the name of James Morris, an Irishman in his early 40s who worked as a “Silk Linen Draper”. This occupation was shared by the five of the remaining nine residents, with two drapers’ shop workers and two female servants making up the balance. The name heading the list of occupants at the other household was John Lambe, an Englishman in his early 30s. He was one of eight men living there (there were also three female servants), all of whom gave their occupation as “Silk Mercer”.

Two of the other names in John Lambe’s household also look familiar. One was Richard Oliver. The other was John Atcherley [

]. In time, these two would rise from the workforce of John Satterfield and Company to run the company, and bestow their names upon it.