I had not been researching the Atcherley family for very long before I started finding references to a company named Atcherley & Dawson, a firm of tea dealers based in Australia during the late 1800s and early 1900s. However, the identity of the Atcherley involved in this company was a mystery, and remained so for quite some time. Finally, a database of Wills, Probate and Administration Records on the Public Record Office Victoria website provided the answer. It showed that probate had been granted on the will of Stephen Atcherley [

Stephen had been born 43 years earlier, in January 1851 (or thereabouts), at Ford, just off the Welshpool road to the west of Shrewsbury, Shropshire. His age was given as 2 months on the census taken at the end of March that year, which showed him living with his parents (Thomas Cureton Atcherley and Mary, née Matthews), and seven siblings, at Cruckfield House in Ford. His father Thomas was at that time a retired farmer. Stephen was baptised on 22 April 1851 at Great Ness (St Andrew’s church, pictured below), which suggests that the family may have moved to that parish not long after the census was taken. [3, 4, 5] 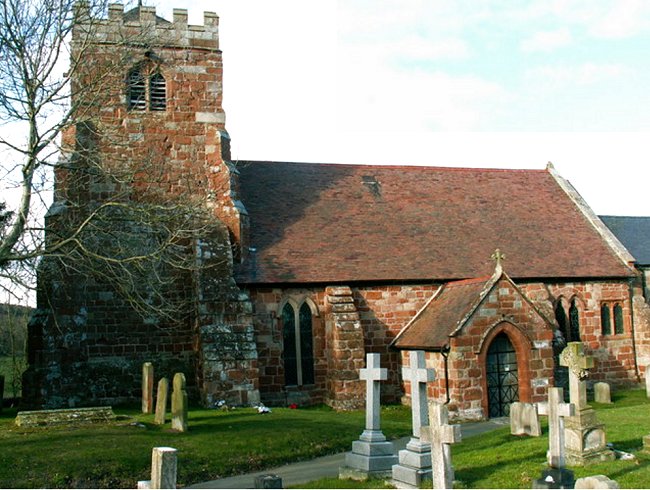 At some point over the following decade, Stephen’s family moved to Wolverhampton, in Staffordshire, where his father Thomas Cureton Atcherley was a grocer at the time of the 1861 census. Within the space of the next ten years Thomas had returned to his native Shropshire and to his original way of life as a small farmer. The 1871 census shows him living at Milford House in Little Ness, with wife Mary and his youngest son, Stephen. Although Stephen was by this time aged 20, no occupation was listed for him. He had joined the Great Western Railway Company as a clerk in February 1866, aged 15, but left his job less than two years later in October 1867. Perhaps he returned to Shropshire with his parents at that time – or maybe he had decided that life as a railway company clerk was not for him. [6, 7, 8]

Stephen’s quest for a life that was for him eventually took him about as far away from Shropshire as he could go. It seems likely that he departed these shores sometime between the latter part of 1876 (at which time he was once more resident in Wolverhampton, but holidaying on the Isle of Man) and the early part of 1881 (I have not found him on the 1881 census of England and Wales). He was certainly living ‘Down Under’ by 1884, as his marriage to Louisa Hobday was registered at Victoria that year [9, 10].

Louisa Hobday was a little older than Stephen, having been born in 1848, in Kingston Upon Hull, Yorkshire. She had migrated to Australia with her parents, Joseph (born about 1821 at Canterbury, Kent), who had been a watchmaker in Yorkshire, and Elizabeth (née Thompson, born about 1824 at Macclesfield, Cheshire). This family’s move to Australia might have been inspired by the place where they lived in Kingston upon Hull: Melbourne Street! [11, 12, 13]

Stephen and Louisa Atcherley’s first child was Annie Beatrice Atcherley, born about 1884 at Hawthorn, Victoria. She lived to the age of 70, her death being registered in Victoria in 1955. Her parents’ second child, Stephen Stanley Atcherley, was also Louisa’s last. Stephen junior’s birth and death were both registered in 1886 – along with the death of Louisa Atcherley. (For a picture of their gravestone see MIs in Australasia.) [14, 15, 16, 17, 18]

In January 1889 Stephen Atcherley remarried [19]. The event was reported in the Melbourne Argus as follows:

ATCHERLEY—LAVERS.—On the 2nd inst., at the residence of the bride’s father, Tempe, Burke-road, Hawthorn, by the Rev. P.R.C. Ussher, S. Atcherley to Fannie A. Lavers, eldest daughter of F.S. Lavers.

Fanny Amelia Lavers was a native of Australia. The second of five children born to Frederick Samuel Lavers and Sophia Lucy (née Douglas), her birth was registered in New South Wales in 1851. Before the end of the year in which she married Stephen Atcherley, she gave birth to a daughter, named Alice Bell Cureton Atcherley. [21, 22]

Although I do not know when Stephen Atcherley joined forces with Thomas C Dawson to form Atcherley & Dawson, the company was certainly established by the time of his marriage to Fanny. An application for the registration of three Atcherley & Dawson trade marks had been made in 1888, including one for Globe Brand Tea. In the same year, both Atcherley and Dawson also appeared in a list of provisional directors in the prospectus for the Esplanade Coffee Palace Company Ltd. [23, 24] 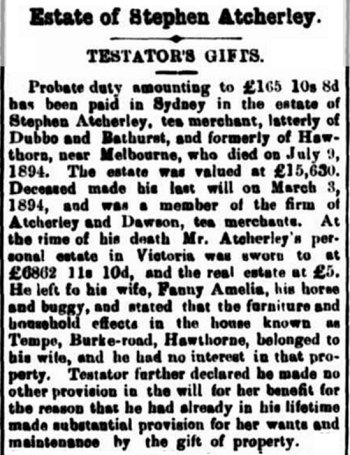 Just six years later, probably in the knowledge that he was terminally ill, Stephen Atcherley made his will. Having already made provision for his wife Fanny, in his will he only left her his horse and buggy. He bequeathed his sulky to Thomas Dawson, and his his gold scarf pin to his brother, John Roger Atcherley. He also left various sums of money, from an estate which was ultimately valued at £15,630, including: £500 each to his sisters, Mary Cureton Atcherley, Margaret Bell Atcherley, Elizabeth Atcherley and Priscilla Matthews; £2,500 in trust for his daughter Annie; £1,000 in trust for his daughter Alice; £200 to his former mother-in-law Elizabeth Hobday; £100 to his former sister-in-law Alice Pearson; £100 to Robert William Hardie “in remembrance of his past kindnesses;” £100 to Queen’s College, University of Melbourne, to found an Atcherley prize; and £100 to the Wesleyan Methodist Sabbath school at Auburn, Melbourne. The residue of the estate was to be divided equally between his siblings during their lives and then to their children, and in the absence of such children to his daughter Annie. In the event of Annie not having any children, the interest due to her was to be split between Wesleyan missions and Queen’s college. [25, 26]

On 9 Jul 1894, just over four months after he had written his will, Stephen Atcherley died at the Royal Hotel in Dubbo, New South Wales [27]. Electoral rolls show his widow Fanny living with the couple’s daughter 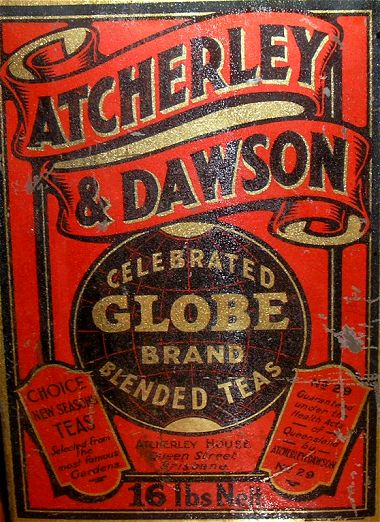 The value of the estate left by Stephen on his death suggests that his partnership with Thomas Dawson had been a very successful one. Their company, Atcherley & Dawson, continued to prosper after Stephen passed away. The firm’s Globe Brand Tea (see picture of tea tin, right) seems to have been particularly popular, to the extent that a reference was made to it in a poem written by poet Andrew Barton “Banjo” Paterson (1864-1941), who is better known as the author of Waltzing Matilda [31, 32]:

The Scorcher and the Howling Swell

The Scorcher and the Howling Swell were riding through the land;
They wept like anything to see the hills on every hand;
“If these were only levelled down,” they said, “it would be grand.”

“If every bloke that rides a bike put in a half-a-crown,
Do you suppose,” the Scorcher said, “that that would cut them down?”
“I doubt it,” said the Howling Swell, and frowned a doleful frown.

“Oh, ladies, come and ride with us,” the Scorcher did entreat,
“A little ride across the park and down the smoothest street,
And you will have a chance to show your very dainty feet.”

The Scorcher rode up all the hills, as if the same were flat;
“It’s very rude,” the ladies said, “to ride as fast as that;
For all of us are out of breath – and some of us are fat.”

“Cheer up, cheer up, my ladies gay,” the Howling Swell replied;
“Behold a tea-shop by the way, with Globe Brand Tea inside;
And all who drink the Globe Brand Tea up any hill can ride.”

And every lady in the band revived on Globe Brand Tea,
That Atcherley and Dawson sell in George Street, near the Quay,
And Howling Swells and Scorchers both proclaim its purity.