There were three log houses in Paris when I came here in 1879. There may have been more, but these I remember well. One was on the lot then owned by the Episcopal Church.  […]
Another log house was on South Main street, about where now is the north end of the bus station, and a rail fence was between it and the street. Charlie Atcherly, an Englishman who ran a meat shop, was living there when I knew the house. 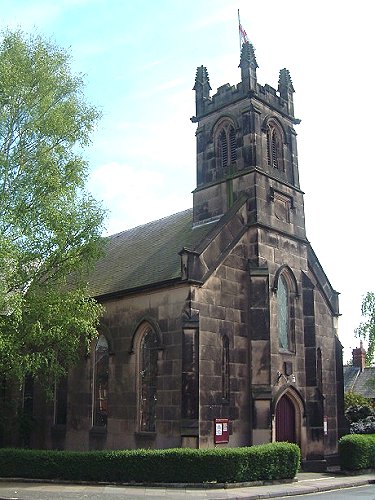 ] to give him his full name, was the fifth son, and the tenth of eleven children, born to Thomas Cureton Atcherley and his wife Mary (née Matthews). His birthplace was Hurst farm in the Shropshire parish of Westbury on 23 October 1846, but he was baptised at the Chapel of St George in Frankwell (pictured right), then part of the parish of Shrewsbury St Chad. When the ceremony took place, on 22 July 1847, Thomas Cureton Atcherley was recorded in the baptism register as a Gentleman.

By 1851, the Atcherley family had moved to Cruckfield House in the parish of Ford. That year’s census showed that Thomas Cureton Atcherley was a retired farmer of 9 acres. He did not remain in retirement however. The census of 1861 recorded the family in Wolverhampton, Staffordshire, where Thomas was in business as a grocer. Charles Atcherley’s younger brother Stephen, aged 10, was still at school, while older brother John, aged 19, was a hardware merchant’s clerk. Charles, aged 14, was between education and work.

The earliest indication I have found as to the line of work Charles Cureton Atcherley went into dates from 1870, and the line of work was labouring. It appears that Charles was not satisfied with this, and decided that opportunities for a better life lay on the other side of the Atlantic. I say all this because the occupation “Lab” was recorded alongside Charles’s name (which was written as “Chas Hatcherly”) on a list of passengers arriving at New York on 27 August 1870.

The timing of Charles’s migration to the United States means that he was not enumerated either on the US census of 1870 or on the England and Wales census of 1871. I suspect that he soon found work – possibly as a butcher’s assistant – and saved his money so that he could one day set up in business by himself. That day came at the beginning of 1872. On 3 January that year, page 2 of Kansas newspaper the Chetopa Advance carried the following advertisement: 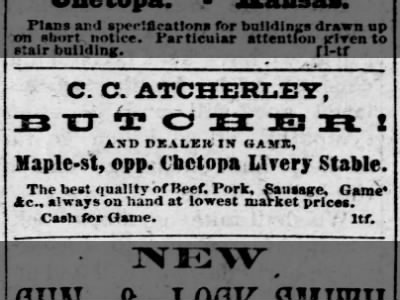 Page 3 of the same newspaper featured a notice which stated: “Mr. C. C. Atcherley has bought out the entire business of Mr. Audinwood, has refitted his shop on Maple street, and will serve his customers to the best meat in the market.”

How successful was Charles Atcherley’s business? I have found no other references to his butcher’s shop in Chetopa, but this does not necessarily mean that he quickly ceased trading. I know for sure that Charles was still in Chetopa in July 1872, as he published a notice in the local paper that month warning people not to buy a ‘note’ for $60 which he had given to one W A Irvin. Charles had given the note to Irvin in return for a horse, but it turned out that the horse had been stolen!

One fact which does indicate that Charles’s business in Chetopa came to an end – either through failure or because Charles decided to sell up – is that he returned to England, and then went back to the USA as a labourer once more. The date of Charles’ return to England is unknown, but he arrived back at Castle Garden, New York, aboard the Baltic, on 23 August 1875. It is tempting to speculate that Charles returned home following the death of his father, which took place on 5 September 1874. 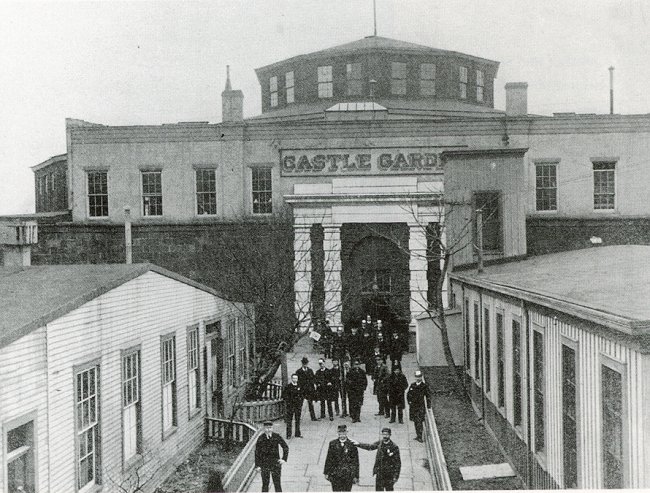 I have found no records confirming Charles Cureton Atcherley’s whereabouts in America between his return in 1875, and 1879 when Dr W W Stell found him living in one of the few surviving log houses in Paris, Texas. Dr Stell, whose words open this story, recalled that when he arrived in Paris in 1839, all the residents lived in buildings like the one inhabited by Charles:

We all lived in log houses and not one sawed plank in the house. The floors were made of puncheons split from large logs, and the top side made as smooth as could be done with the broad axe. The puncheons rested on logs for sleepers. The doors were made of clapboards, pegged to frames made from split pieces or small saplings. Not one nail was to be had. Gimlets were used to bore holes, and wooden pegs inserted for nails.

The 1880 census shows that Dr Stell’s memory of “Charlie Atcherly, an Englishman who ran a meat shop” and who resided on South Main Street, Paris, was accurate. The census itself was less accurate with regard to Charles’s age, showing him as 30 when he was in fact 33. It is possible that Charles may have also been an arable farmer with land elsewhere in Texas. An article in the Galveston News of 18 July 1880, based on a report in the Belton Courier, stated that “wheat crops, lately threshed on King’s branch, turned out better than was expected” and that “Mr. Atcherly made twenty bushels to the acre”.

Later in 1880, on 18 November to be precise, “C C Atcherly” married Maggie Willey in Harrison County. Born Magnolia Amelia Willey on 2 June 1860, Maggie was a native of Texas but her parents were, like Charles, immigrants from England. It appears that the couple lived in Paris, where Charles continued to run his business. And business was good, as Charles was able to employ another butcher to assist him, a man by the name of Joe Spears.

Joe was enumerated on the 1880 census as a 50-year-old single man who worked as a butcher and lived alone. What the census does not tell us is that Joe was reputed to have a fair bit of money hidden in his home. This, sadly, led to his murder. Four men went to his place one night and attempted to draw him outside by disturbing his chickens. When that did not work, they knocked on his door. Joe opened the door only a few inches, keeping it secured with a chain, but one of the would-be robbers poked a shotgun through the gap and opened fire. Unable to get in, or disturbed in the act of trying, the men ran off, leaving Joe mortally wounded. He died two days later, but was able to provide statements which led officers to arrest three suspects (the fourth had fled).

Of the three who were indicted with the murder of Joe Spears, one was sentenced to life imprisonment, one – who turned state’s evidence – was found not guilty, and the third, Isham Scott, was eventually sentenced to hang. The hanging took place in the spring of 1883, the gallows having been built “almost on the spot where the murder was committed”. It was said that “Scott was taken to the gallows in a wagon, sitting on the coffin box, with officers riding alongside. The affair drew a large crowd notwithstanding it was a cold day with a drizzle of rain falling.” I think it very likely that Charles Atcherley was part of that crowd. 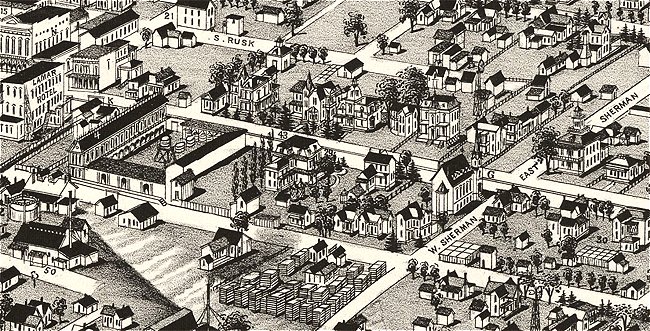 Paris, Texas: South Main Street (running from the Lamar Hotel and over the junction of West Sherman and East Sherman Streets) in 1885.

The Texas State Gazetteer and Business Directory for 1884-5 said that Paris was a thriving city, with a population of 6,000. Its description of the city went on to say:

Listed amongst the businessmen and other prominent residents of Paris was “Atcherly Charles C, meats.” It was, however, the last time he was so listed. An Atcherley family memorial at St Mary the Virgin, Perivale, Middlesex, England shows that Charles Cureton Atcherley died at Paris, Texas on 27 November 1884. He was 38. Oddly, although there is a reference online to a “C. C. Atcherly section” within the Evergreen Cemetery at Paris, I have not found a record of Charles’s burial there.

Charles and Maggie Atcherley’s marriage was ‘without issue’ so Charles left no descendants. Ten years after Charles’s death however, on 25 July 1894, his widow “Maggie A Atcherly” (who in 1891 had been living in Dallas) married Robert Lee Moye and with him she did have children. Although the records I have found of Maggie’s wedding state only that it took place in Lamar County, I think is almost certain that the location of the nuptials was Paris, Texas.