Delano & Atcherley, it will be observed by our advertising columns, have opened a new wholesale and retail Grocery establishment. They are enterprising men, and will keep fully up with the times. We hope to see them prosper.

As we have seen, after his emigration from Britain to the USA Philip Roger Atcherley [

] was, in 1860, working as a brick maker in Rome, Oneida County, New York. If my theory about Philip’s connection to the Powell family of Rome (and formerly of Shropshire, England) is correct, his address and his occupation in the 1860 US census may well have been those in which he first settled after arriving in America. And as we can see from the above newspaper comment, Philip later moved to Illinois. He did not go there directly from New York state however – Philip had at least one other temporary home during his journey between these two places.

When the Iowa State Census of 1856 was taken, “Pillip Acherly” aged 38, along with his wife Mary [

] (12), all born in England, were recorded at Davenport township in Scott County. They had been there for less than a year, and they would be on the move again shortly after they were visited by the census enumerator. To pay his way, Philip was working as a clerk. Did the family live in any other places, where Philip found different types of employment, after leaving Rome and before arriving at Ottawa? If so, I have yet to find any evidence. 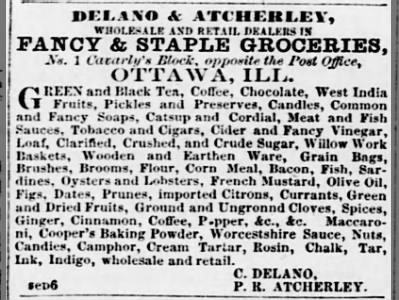 By September 1856, in the town of Ottawa, LaSalle County, Illinois, Philip Roger Atcherley was at last back in business as a merchant. Not as a retailer of drapery, as he had been in England before his bankruptcy, but as a wholesale and retail grocer. It must have felt good to be trading again. The notice published in the advertising columns of The Ottawa Free Trader of 6 September 1856 by C Delano and P R Atcherley showed the range of “Fancy & Staple Groceries” they sold. With spelling and typographic errors corrected, the goods on sale were as follows:

Delano and Atcherley’s advertisements in the Free Trader continued until at least 27 June 1857 – I have found none after that date and this suggests that the partnership may then have ended, with the Atcherley family moving elsewhere. Before they did, however, another Delano-Atcherley partnership was formed. This one involved Philip Atcherley’s daughter Mary.

The fate of Mary Atcherley after her appearance on the Iowa State Census of 1856 was a mystery to me for a long time. But some creative searching turned up a record which explained her ‘disappearance’ – a record from LaSalle County dated 23 October 1856 for the marriage of Mary ‘Acherly’ and Charles Delano [

It would appear that Charles was Philip Atcherley’s trading partner C Delano. At the age of 17 he was enumerated at Ottawa on the 1850 US census with his parents Loring and Sarah Delano, and two younger brothers. There were in addition 11 guests in the household, which was a hotel kept by Loring Delano and O Leavins (who lived on the premises too). Advertisements in The Ottawa Free Trader show that the hotel, known as Fox River House, was “on the canal, near the aquaduct” and that canal packets stopped there regularly. 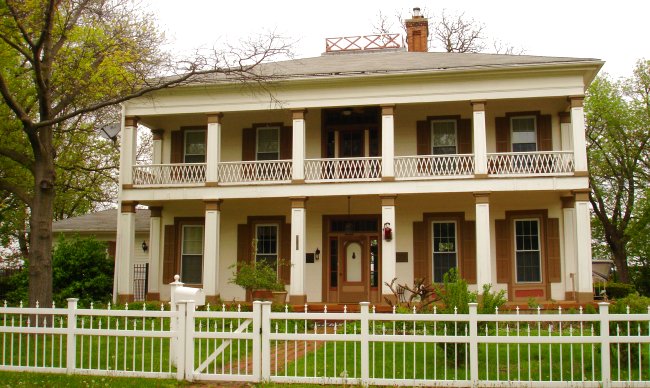 John Hossack House, Ottawa, IL. Built in 1854–55, it would likely have been familiar to
Philip Roger Atcherley and his family.

It was perhaps with financial backing from his father that Charles went into business, as the senior partner despite his age, with Philip Atcherley. I imagine he was viewed as a ‘good catch’ for the young Mary Atcherley, who was 17 when she wed 23-year-old Charles, after what seems to have been a whirlwind romance! The official record of their marriage narrowed the age gap, as it shows that Mary was 18 and Charles 21.

Genealogists often find that solving a mystery simply reveals at least one more, and that has been the case with Mary Atcherley. After discovering that she married, I have found no further records relating to her! Although Charles Delano was recorded on the 1860 US census, still at Ottawa, Mary was not. That census, incidentally, shows that Charles was living with Oranzo Leavins (actually Leavens, no doubt the ‘O Leavins’ who was running the hotel with Loring Delano in 1850) and Oranzo’s wife Sarah. Sarah was in fact Charles Delano’s mother – she had married Oranzo Leavens on 27 Jan 1853, following Loring Delano’s death.

Sarah was not the only member of the Delano family to take a second spouse. On 10 June 1861, in Wisconsin, the widowed Charles Delano married Hannah Sarah Coudry. So my original quest, for a record of the death or marriage of Mary Atcherley, has turned into a hunt for a record of the death and/or burial of Mary Delano (probably in Ottawa, Ohio, between her marriage and the subsequent US census on 1 June 1860.) I wonder what happened to her, that she died so young?

By 1 June 1860, Philip Roger Atcherley was settled, with his wife and surviving children, in Newark, Ohio – but it is quite possible that he did not go there directly from Ottawa. The Missouri State Gazetteer and Business Directory of 1860 (containing information gathered during the previous year?) included an entry for “Ballew & Achorley, dry goods dealers.”

This appeared in the section of the directory covering Princeton, located appropriately enough in Mercer County. The Ballew side of the partnership was probably William B Ballew, who was enumerated at Princeton as a merchant on the 1860 census. According to the Pioneer Press of Mercer County, “Richard B. Ballew (1822-1897), a local public servant and philanthropist […] was credited with bringing the first stock of dry goods to Princeton, where he owned one of the state’s first department stores, and where he gave the order that no widows or orphans of Civil War Veterans were ever to be turned away.”

Was the ‘Achorly’ side of the business Philip Roger Atcherley? The spelling of the surname is wrong of course, but we have already seen several mutations of ‘Atcherley’ in this story! If, as I strongly suspect, this was Philip then his stint as a dry goods dealer in Princeton prepared him well for his life in Newark.

The earliest evidence I know of which shows that Philip and his family were in Newark, Ohio, is not the 1860 census but a column in a New York City newspaper, the Evening Express. A listing of visitors staying in the city’s hotels printed on 18 April 1860 included, at the Pacific Hotel, “P R Atcherly, Newark, O.” Was Philip visiting New York for business or pleasure? I suspect the former – he may well have been sourcing goods for his latest venture. 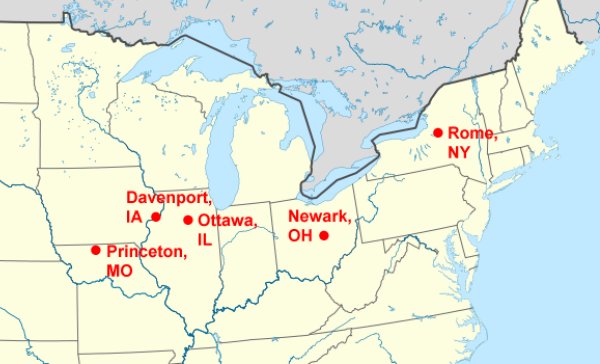 It appears that Philip Atcherley first ‘set up shop’ in Newark with Sturges Solomon Sigler, who was born near that city in 1834. In its obituary for Sigler in 1903, the Newark Advocate stated that “At the age of 16 he entered the employ of Seymour & Company, dry goods merchants, Newark, and five years later left them to form a partnership with Mr. A. C. Atcherley at Newark, under the firm name of Atcherley & Sigler.”

I don’t know how P R Atcherley became A C Atcherley in a newspaper which was very familiar with the family. There is something else in the Advocate’s report which doesn’t quite add up either. If Sturges Sigler started work aged 16 and then formed a partnership with Philip Atcherley five years later, that partnership would have begun in 1855 or ’56, when the Atcherleys were (as we have seen) elsewhere. One interesting thing we do learn from this obituary though, is that Philip and was finally in a partnership in which he took the leading role – after Delano & Atcherley, and possibly Ballew & Atcherley, he was heading up Atcherley & Sigler!

Sadly, copies of the Newark Advocate dating back to the years when Philip Atcherley was a merchant in the city have not been digitised and put online. A few of those from later years, however, like the issue which reported on Sturges Sigler’s death, provide some tantalising glimpses. These are found, once again, in the obituaries, such as that for Bennett V Caffee printed on 30 March 1896:

He was a good accountant and for a long time was bookkeeper and clerk for the Mary Ann Furnace Company and for the Hocking Furnace Company at Hocking Ohio. He was afterward secretary and book keeper for the old Licking and Coshocton coal company. He was also for some time cashier and book keeper for P. R. Atcherley who then kept the largest mercantile establishment in our city.

On 4 October 1919, by which time the paper had become the Newark Daily Advocate, an obituary for 77-year-old Miss Annie White noted that: “The deceased was the first woman clerk ever employed in a Newark store at an early age, several years before the civil war, she took her first position with Atcherly & Son, a firm which has long since gone out of business.”

From the above, we learn that Philip Atcherley’s store was Newark’s ‘largest mercantile establishment’, and that following its beginnings as Atcherley & Sigler, it became Atcherley & Son. Sturges Sigler left Newark for nearby Columbus in 1861, where he formed a new partnership: Harris & Sigler. Philip’s son James probably did not join his father in business until the end of 1862 or early 1863, by which time he had left the 31st Ohio Volunteers (see James Roger Atcherley’s American Civil War). In a blog post about Christmas in Newark during the 1860s, which appears to have drawn information from locally held copies of the Advocate, it was noted that in 1863: “The Atcherly & Son dry goods store announced that it would close for Christmas day, but it had a new supply of winter clothing.”

In 1866, the Atcherleys’ dry goods store closed for good. The following notice appeared in the Columbus Morning Journal of 7 August 1866:

Any person desiring to purchase a good stock of Dry Goods, in a good stand, with a lease of two years to run, in the city of Newark, Ohio, one of the most thriving business places of the West, are notified that P. R. Atcherley & Son will sell their entire stock, fixtures, lease, &c., on the most reasonable terms. Their stand, in the Preston House Block, is the best in the city.
Address    P. R. Atcherley & Son,
Newark, Ohio

I think it likely that Philip had by 1866 made enough money to retire. Certainly, when the US census of 1870 was taken, he was recorded as a “retired merchant” – his son James meanwhile was an attorney.

Philip Roger Atcherley died on 20 August 1871, and was buried at Newark’s Cedar Hill Cemetery. In England his life had been blighted by bankruptcy proceedings but in America Philip bounced back, and left his widow and surviving children well provided for.