My grateful thanks to Find a Grave member Chris Kemp for granting me permission to use these photos; copyright in the images remains with Chris. 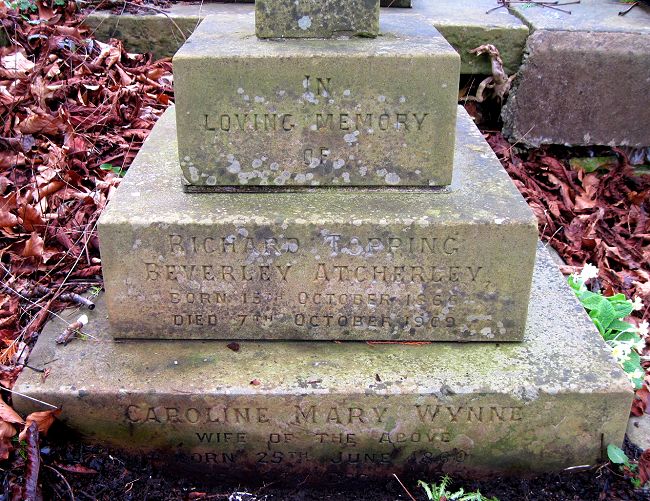 The inscription one side of the gravestone reads:

IN
LOVING MEMORY
OF

The following obituary for Richard appeared in the Rhyl Journal of 16 October 1909:

We regret to have to record the death of Mr Richard Topping Beverley Atcherley, which occurred at his residence, 6 Stanley-place, Chester, on Thursday last week. He was well-known to many in Rhyl, where some of his early days were spent. The deceased gentleman, who was in his 43rd year, was descended from a well-known Shropshire family. His grandfather was a serjeant-at-law at Shrewsbury, and his father was the late Lieut- Colonel F T Atcherley, of the 30th Foot Regiment. The family many years ago resided in the present Bishop’s Palace, Chester, then known as Deeside. The deceased gentleman was educated at Cheltenham College, and afterwards studied for the law, being first in the offices of Messrs Burton, Hart, Yates, and Burton, of Lincoln’s Inn Fields, and afterwards with Messrs John Holland and Co, the well-known London solicitors. He passed his examination, and practised as a solicitor in London for ten or twelve years, then residing at Pinner. About 1903 he came to reside in Chester. He married a daughter of the late Judge Wynn Ffoulkes, and is survived by her and two young daughters. He ceased practice when he came to Chester, having independent means. He was a staunch Churchman and a zealous and enthusiastic worker in the Conservative cause, and recently he engineered the local opposition to the refuse destructor being placed at the Electric Light Works to a successful issue. A brother of the deceased is Chief Constable of the West Riding of Yorkshire, and he formerly held the same position in Shropshire. Mr Atcherley’s death was tragically sudden. He was taken ill last Sunday week with blood poisoning, and despite the best local medical skill so virulent was the infection that It was impossible to save his life. The unexpected news of his early demise came as a great shock to his many friends, for he was widely known and greatly respected, and his loss will be a very great blow to the local Conservative cause, in the financial administration of which he did invaluable work. 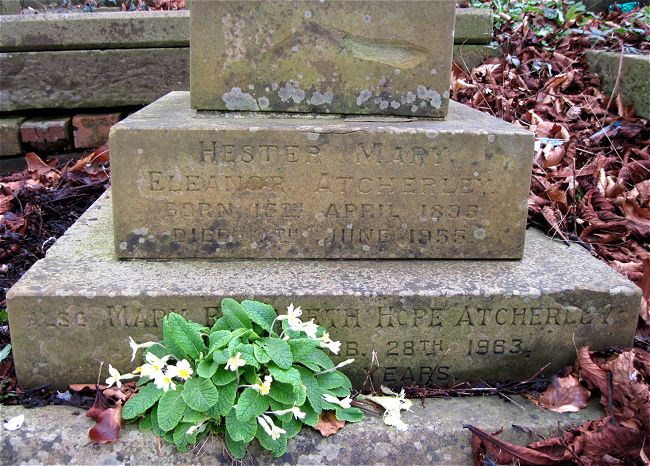 The other side commemorates Richard and Caroline’s daughters:

Both Hope and Hester were born at Hatch End in Pinner, Middlesex (Hope on 23 January 1894). The story of their younger years is told in Hope and Hester Atcherley’s school days.