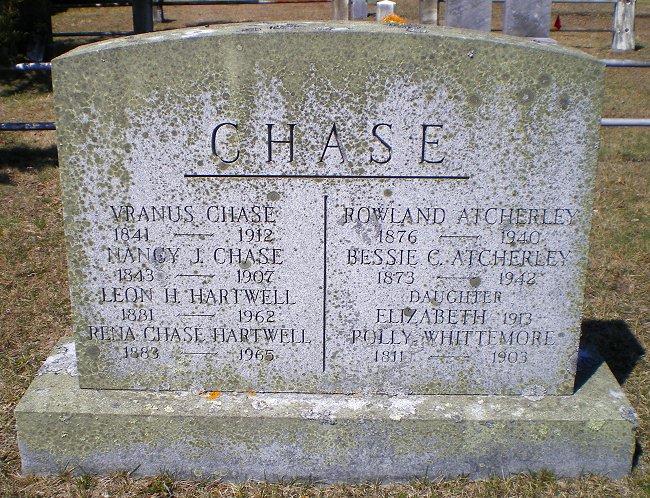 This memorial to the Chase family is situated in West Dennis Cemetery. Bessie Chase, daughter of Vranus and his wife Nancy, married Rowland Clarence Atcherley at Providence in the state of Rhode Island on 10 June 1903. The couple had one child, Elizabeth, who was born in Rhode Island on 17 March 1915 and died the next day. (Oddly, the MI states 1913.)

Rowland Clarence Atcherley passed away on 16 April 1940 at the age of 64. A brief notice published in The Standard (volume 126) that year stated: “Regret is expressed at the death this week of Rowland C. Atcherly, treasurer of the E. I. Watson Co., Inc., of Providence and secretary of the Providence Mutual Fire. He was associated with both organizations for many years.”

Bessie – who was born Charlotte Bessie Chase on 23 December 1873 and was known sometimes as Elizabeth and at other times as Bessie – died two years after her husband, aged 69.

Above is an extract from the picture above, showing details of these Atcherley family members. Clicking on either image will take you to the original photo on the Find A Grave website. I would like to thank the photographer, Find A Grave member Caryn, for allowing me to use her image on this website. 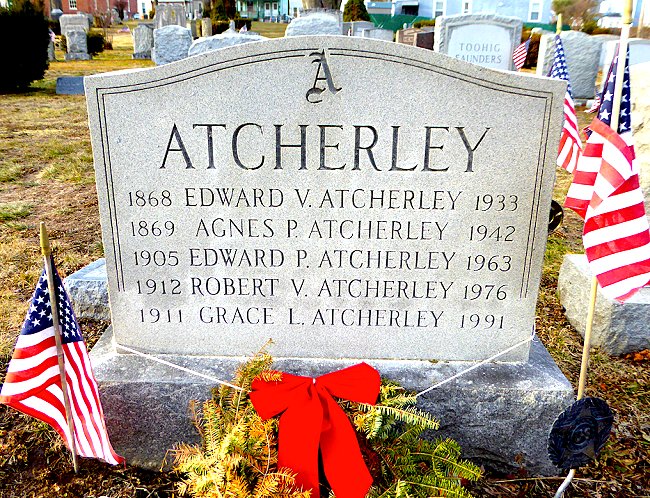 Also buried in Massachusetts is Rowland Clarence Atcherley’s older brother Edward Vincent Atcherley. Born on 19 November 1868 at Providence, Rhode Island, Edward was the second Atcherley to be born in the USA, and the first to result from the marriage of English immigrants John Atcherley and his wife Drusilla (née Greatorex).

Edward Vincent Atcherley gained employment with the New York, New Haven & Hartford Railroad as a clerk. It was probably this work which took him to Boston, Massachusetts, where he married Agnes Elizabeth Phillips on 27 July 1891. Edward and Agnes later moved to Winthrop, where the celebrated their 15th wedding anniversary in 1906 “with a reception and banquet to which about 50 couples, relatives and near friends were invited.” At this reception the couple ” were recipients of many handsome presents.” (Boston Daily Globe, 12 Aug 1906, page 10.)

Edward and Agnes had four children, two girls and two boys. Both daughters died in infancy, but sons Edward Philip Atcherley and Robert Vincent Atcherley lived until the ages of 58 and 64 respectively. Edward did not marry, but Robert wed Grace Madaline Leitch in 1937 and have descendants still living today. For more information, and pictures, of brothers Edward and Robert (and Robert’s wife Grace), see Edward and Robert Atcherley in the Pictures section of this website.

The photo above is © 2017 zoomurray (FindAGrave #47887179); my thanks to Zoe for taking the photo at my request and for allowing my use of her image here. To view the original on its memorial page on Find A Grave, just click on the picture above.