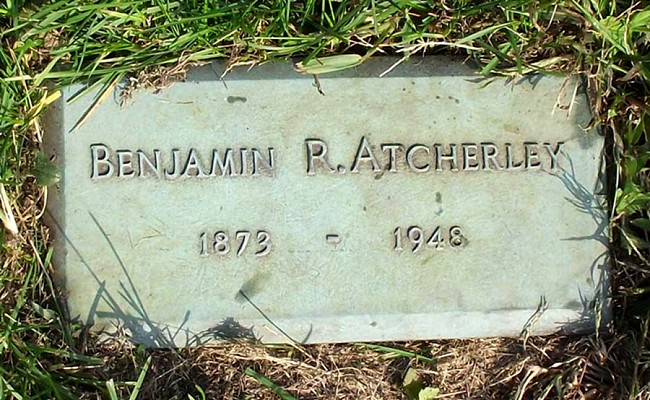 Benjamin Roger Atcherley was born 14 Jul 1866 (not in 1873 as shown in the monumental inscription above) at Newton, Licking County, Ohio, USA. He was the only child of James Roger Atcherley (1840-1907) and his wife Susan (Elliott) – Susan died not long after Benjamin’s birth. Benjamin married three times. His first wife was Theresa H Walsh, born around 1873; the couple married 2 Mar 1893. They had a son named James B Atcherley who died 24 Mar 1895 at almost one month old. Benjamin next married Martha A “Mattie” Houghton, on 19 Oct 1887. After losing their first two children within months of their births (Annie Mary Atcherley in 1888 and James Rodger Atcherley in 1889), their third child Hannah Margurite Atcherley survived into adulthood, married, and had children of her own. It appears that Benjamin and Mattie divorced; Mattie married George Edward Taylor in 1893. Ben did not marry again until 29 Aug 1908, when he wed Estella Bell Bossinger. He died on 21 Nov 1948 at the age of 82 and was buried at Smithfield East End Cemetery, Pittsburgh, Allegheny County, PA. 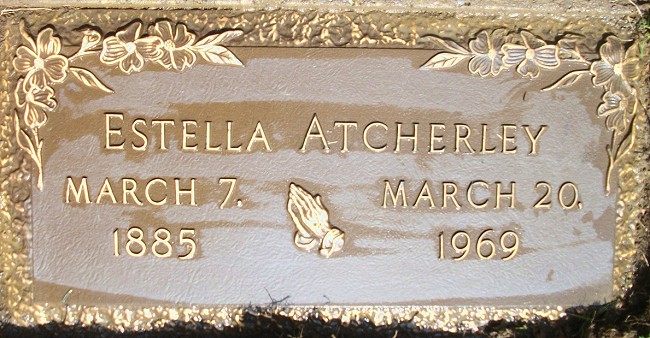 Estella Bossinger, third wife of Benjamin Roger Atcherley, was born on 7 March 1885 in Mosgrove, Armstrong county, Pennsylvania, daughter of John M Bossinger and his wife Clara (Roney). She was one of seven children (only five of whom survived to 1900). Ben and Estella Atcherley appear together in Pittsburgh on the 1910 and 1920 US census returns, living with Estella’s parents and siblings in 1920. Estella was still with her father (plus her new stepmother and her widowed sister) on the 1930 census; so far I have not found a record of Ben in that year. By 1940, Ben Atcherley was back with his father-in-law, but Estella was living with her brother, sister-in-law and sister at a different address in Pittsburgh. Estella Atcherley died 20 Mar 1969 and was buried at Jefferson Memorial Park, Pleasant Hills, Allegheny County, PA.

Photo © Martha Hallett, used with permission. Like Richard, Martha does a great job photographing graves and posting the results at Find A Grave.