], fourth son of Lt.-Col. Francis Topping Atcherley and his wife Emma Arabella Heward, was born at Elizabethtown, Brockville, Ontario, Canada on 1 March 1871. The fact that the birth took place on Saint David’s Day may have influenced Francis and Emma’s choice of name for their new son. Sadly, Emma died on 19 March, within three weeks of delivering Llewellyn, presumably from complications arising from the birth. 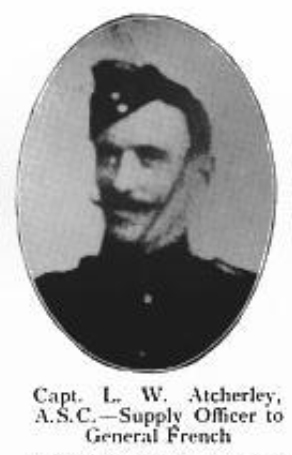 pursued a career in the military, joining the East Lancashire Regiment in 1890 after training at Sandhurst. He transferred to the Army Service Corps four years later, and it was with this unit that Llewellyn took part in the Ashanti Expedition in 1895-6 (travelling there on the Bathurst with Sir Francis Scott, Major Baden-Powell and Prince Christian), and the South African War from 1899 to 1902. During the latter campaign he served on the staff of Lord Kitchener at Pretoria, and was twice mentioned in despatches.

The photo shown here is taken from theBlack and White Budget of 10 March 1900, at which time Llewellyn was a Captain, serving as Supply Officer to General French. He returned from the war as Brevet Major Llewellyn Atcherley, Deputy Assistant Quartermaster. In October 1902 he received from the King, at Buckingham Palace, the Queen’s South Africa medal and King’s South African medal.

Llewellyn became a full Major in the ASC in 1905 but left the Army in 1906 to become the Chief Constable of Shropshire. However his family’s residence was in Yorkshire, and Llewellyn managed to secure the post of Chief Constable of the West Riding of that county in 1908. It was during his time with that force that he devised and published, in 1913, M.O. Modus Operandi in Criminal Investigation and Detection.

On 21 August 1914, shortly after Britain declared war on Germany, the War Office announced that Major L. W. Atcherley, M.V.O., Reserve of Officers, had been granted the temporary rank of Lieutenant-Colonel and the post of Assistant Quartermaster-General, effective 5 August. During the course of the Great War, the King presented Lt.-Col. Atcherley with the King’s police medal, and the Lieutenant Colonel continued to advance through the ranks. By the end of the war he was Major-General Llewellyn William Atcherley C.M.G., C.V.O. (See Llewellyn Atcherley’s World War One.)

In 1919 Llewellyn was appointed one of His Majesty’s Inspectors of Constabulary. This role involved carrying out regular inspections of police forces (mainly in northern England) and making recommendations for improvements in policing. 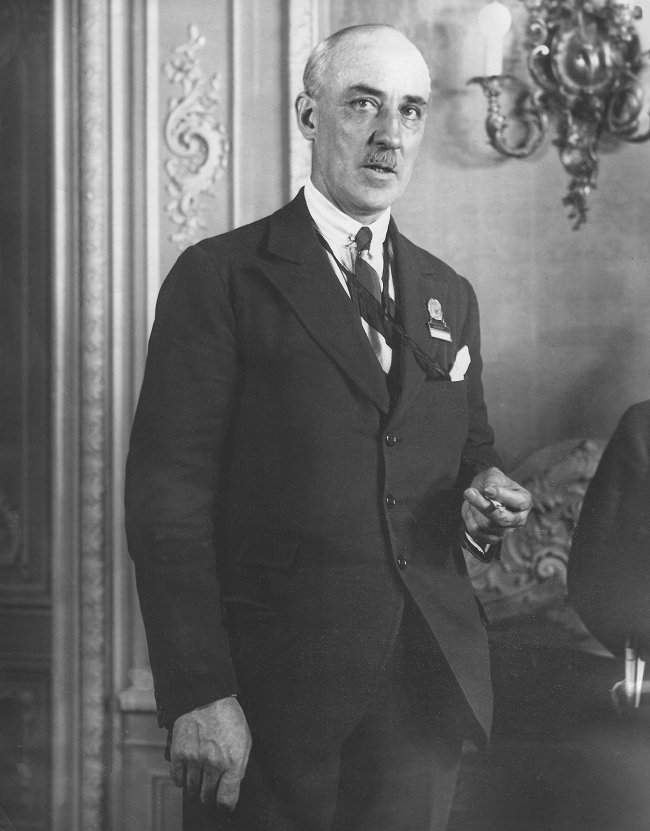 In 1922, the job took Llewellyn further afield – to New York, where he attended the first International Police Conference at the Waldorf-Astoria. The photographs above and below (which, given the year in which they were produced, are now in the public domain) were taken at the conference by Central News Photo Service. (See Llewellyn William Atcherley, Inspector of Constabulary.) 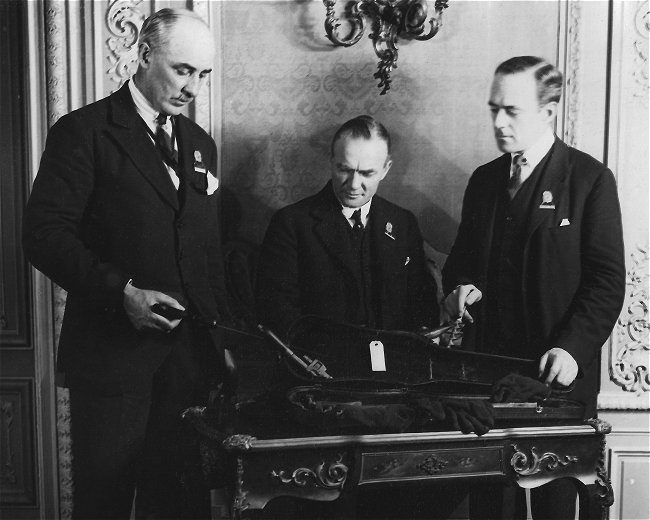 Although it was his twin sons Richard and David Atcherley who achieved fame as pilots, Llewellyn got up into the air too. He had taken up hot air ballooning during his days as Chief Constable of Shropshire, and in 1927 he took a number of flying lessons with the Yorkshire Aeroplane Club. One or both of his sons often flew with the club on the same days that he did, but not in the same aircraft.

Llewellyn retired from the Inspectorate of Constabulary in 1936. However, on the outbreak of the Second World War he returned to his former employment and served until the end of that conflict. In 1942, when it was put to Llewellyn’s wife Lady Eleanor Atcherley that her sons had fine records (as pilots), she replied: “I’m prouder of my husband. At 71 he is at full work as Adviser to the Regional Commissioner at Manchester on police matters. That is what I do call a splendid record.”

Llewellyn William Atcherley died in York on 17 February 1954, aged of 82. Known to many as the father of the Flying Twins, he was a man who deserves to remembered for his own achievements in both the military and the police.