For many years, genealogists have constructed family trees, or pedigrees, by applying deductive reasoning (and in some cases blind faith or even wishful thinking) to oral and documentary evidence concerning individuals and their family relationships. Computers and the internet have made the records more accessible and furnished new tools for assembling trees, but haven’t changed the underlying process. In recent years however a completely new source of information has become available to genealogists: the stuff that makes us who we are, our DNA.

There are three types of DNA test used for genealogy, and all of them work by comparing elements of a person’s DNA with those of others who have taken the same test. The most useful for a surname study – such as my Atcherley One Name Study – is the Y-DNA  test. This uses the DNA passed from fathers to sons on the Y chromosome. In most cases the father’s surname is passed on along with his genes.

Mitochondrial (or mt) DNA is passed down from a mother to her children, so testing this can help trace relatives descended from a common female ancestor. By its very nature this test is of no value to my Atcherley One Name Study. My mt-DNA comes from my mother, Elizabeth Atcherley, from her mother, Louisa Hall, from her mother, Harriet Richards, and so on.

Finally, there is the autosomal or ‘family finder’ test. This analyses DNA inherited from the full spectrum of  a person’s ancestors and can detect relations as distant as fifth cousins (those sharing the same 4x great grandparents). In my case, this test just might reveal something about my Atcherley ancestry. In theory at least, some of my DNA (around 1/32 or just over 3%) comes from my unknown 3x great grandfather, the father of Henry Atcherley. If he, or any of his siblings, have descendants alive today who have taken the autosomal DNA test, there is a chance that I would get a DNA match with them.

I am in any case a ‘learn by doing’ kind of person, so taking a test is probably the best way for me to find out what genetic genealogy has to offer. At “Who Do You Think You Are? Live” in Birmingham earlier this year, Ancestry offered me the opportunity to do just that, with their (autosomal) AncestryDNA test (see Part 1 of my report on the show). How could I refuse?

The process of taking the test is simplicity itself. Unlike other tests which require cheek swabs to be taken (a painless procedure, I should add), the AncestryDNA test is non-invasive – all you have to do is dribble some saliva into a tube. Once the saliva is at the correct level in the tube (in my head I can hear Mary Poppins saying “spit spot!”), the funnel is removed and the cap is screwed on. This releases a blue stabilising fluid into the tube (see photos below). Next, the test kit is activated online by entering the number printed on the tube, onto the Ancestry website (this is also when the saliva provider should be identified in the Ancestry family tree in which they appear). The tube then goes into a plastic bag, which is in turn sealed and placed into an pre-addressed, post-paid mailing box. This is then popped into a post box, and from this point the postal services and AncestryDNA take over. 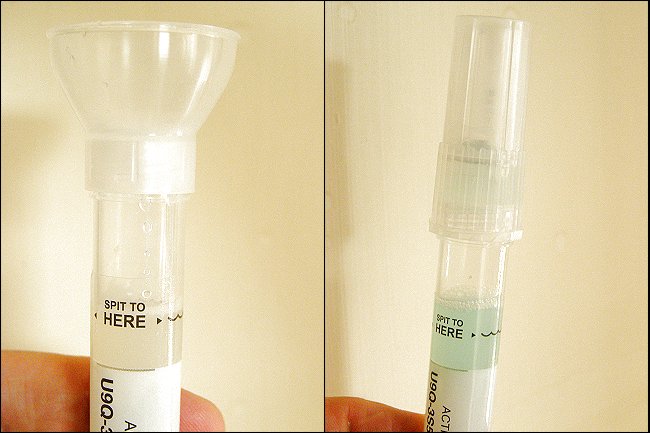 Then, the waiting begins. If there’s one thing I’ve learned about DNA testing, it is that patience is required. It takes a while for the saliva sample to make its way across ‘the pond’. It takes a while longer for the analysis to be carried out and for the outcome to appear online. Ancestry advises that all this can take from 6 to 8 weeks. In my case, the email telling me that my results were ready arrived a little sooner than I was expecting. 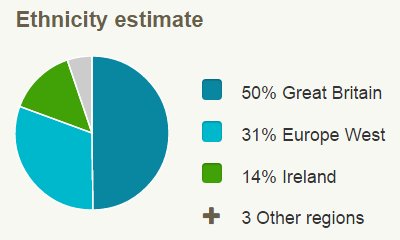 The first thing that caught my eye when I viewed my results was my Ethnicity Estimate. This is another feature of the autosomal DNA test. Certain ‘genetic signatures’ occur more frequently in some populations than in others, and the presence of these signatures is used to provide a guide as to which peoples the test subject’s DNA has come from. I was quite prepared to see a mixture of ‘British’ and ‘Western European’ origins for my DNA, with perhaps a smattering of Scandinavian, reflecting the mixed ancestry that is typical of most Brits. And that is broadly what I got – along with a suggested 14% from Ireland.

Since I have never found even a hint of Irish ancestry while tracing my family tree, the news that I was (as I then saw it) 14% Irish was something of a surprise. Had one of my great grandmothers ‘played away from home’? A well-timed blog post about ethnicity (or ‘admixture’) results by genetic genealogist Debbie Kennet – Comparing admixture results from AncestryDNA, 23andMe and Family Tree DNA – put things into perspective:

Admixture tests really need to be used for entertainment purposes only at the present time, and the results should be taken with a very large pinch of salt. However, the tests can sometimes provide useful insights.

Digging a little deeper into the information available at Ancestry, I learned that the genetic signature for Ireland is “Primarily located in: Ireland, Wales, Scotland”. A map suggested that much of northern England – and the western Midlands (where many of my ancestors were born) – are also included. So a recent Irish incursion into my family tree is not necessarily indicated. Indeed, I may have no ‘Irish’ DNA at all. The imprecise nature of ethnicity estimates mean that behind the headline figure of 14% Ireland, my ‘Irish’ ethnicity estimate ranges from a maximum of 30% down to a minimum of zero!

On to the DNA ‘matches’ then. I have 38 pages of them. The closest matches however – a dozen of them – are on the first results page. They all fall into the “possible range” of 4th  to 6th  cousins, each of whom potentially share a pair of my 3rd, 4th or 5th  great grandparents. As far as I can tell, all of these matches are American. Three of them have no Ancestry family tree to compare with my own. Two of them have private Ancestry trees, which I cannot access without asking for (and being granted) permission. The match whose 4th  to 6th cousin status is rated at a confidence level of “Extremely High” (the rest are “Very high”) has a tree with just 24 people in it.

That leaves six matches with accessible family trees each containing hundreds or even thousands of people. For each match I can view a summary of their tree, with a basic pedigree chart and a list of the surnames within it. A handy feature is the “Map and Locations” summary which highlights the birthplaces  of the ancestors for both myself and my ‘match’. Though all my top matches have ancestors from the British isles, there is little geographic overlap between most of their ancestors and mine. My known ancestors, for the most part, were born in Birmingham and in counties to the north-west or south-east of that city (Shropshire, Staffordshire, Warwickshire, Northamptonshire and Oxfordshire). The map below shows their birth places on an Ancestry Map and Locations summary, with none of the ancestors of my DNA match in the vicinity! 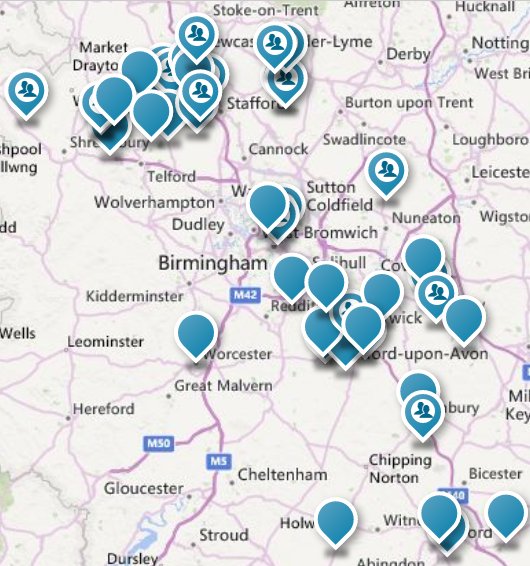 I can also look at the public Ancestry family trees of my matches in the normal way, and I have done so to find surnames shared by their ancestors and mine and to look at the individual profiles of any likely ‘suspects’. But this has not yielded any promising leads, and I have not yet seen anything which has made me feel that contacting any of my matches would be worthwhile.

To some extent, this is not surprising. The Ancestry DNA test, which was launched initially in the USA, has not been available in the UK for very long. As more of Ancestry’s UK customers take the test, the chances of getting a closer match (closer both genetically and geographically) will increase. It’s a waiting game again.

While I’m waiting, there are other avenues to explore. When it comes to DNA tests for genealogists, Ancestry is not the only game in town. And I don’t have to take another test to find out what some of the other players can make of my genetic heritage. The raw data from my test results at Ancestry can be downloaded, and then uploaded to Family Tree DNA and Gedmatch for their analysis. I have in fact done exactly that, and the initial results will be the subject of Part 2 of this article.

Picture credits. DNA: Public domain image from Pixabay. Fred Atcherley ancestry, and AncestryDNA test kit in use: by the author. All other images are screen grabs from AncestryDNA.