They went with songs to the battle, they were young.
Straight of limb, true of eyes, steady and aglow.
They were staunch to the end against odds uncounted,
They fell with their faces to the foe.

Although no Atcherleys lost their lives in the Great War, some of the children and grandchildren of Atcherley women (who lost their Atcherley surname through marriage) did make the ultimate sacrifice.

Two of those casualties were first cousins Henry Palin and Edward Henry Steventon, grandchildren of my own great great grandparents Henry Atcherley (1822-1886) and his wife Mary (nee Jones; 1828-1902), which makes them first cousins, twice removed, of mine. A third casualty was Tom Atcherley Pugh, a grandson of the Rev. Roger Atcherley (by Roger’s daughter Lucy) and a great grandnephew of Captain James Atcherley of the Royal Marines. Finally two brothers, Thomas Henry and Edwin Benbow of New Zealand, were sons of Charles Atcherley Benbow, who was in turn a son of Sarah (daughter of John Atcherley of Kinnerley parish, Shropshire) and her husband Richard Benbow.

Henry was the fourth child (and only son) of Mary Atcherley, who had married William Palin in 1873. Although William and Mary were both Shropshire born and bred and began their married life together in that county, they moved to Staffordshire after the birth of their third daughter. William, originally an agricultural labourer, became a miner, first of ironstone and then of coal. At the time of the 1901 census both father and son were working in a coal mine near their home at Knutton in Silverdale, William as a hewer and Henry as an inclineman. Ten years later Henry, by then a hewer, had left his parental home and boarding with his sister and brother-in-law (Emma and Samuel Bagley) and their children in nearby Chesterton. 25-year-old Elizabeth Thompson, a presser, was also boarding there. She and Henry married at Wolstanton not long after the census was taken. Elizabeth was almost certainly carrying the couple’s first child at that time, as Joseph Thompson Palin was born on 28 September 1911. The birth of their second child, William, took place on 15 August 1913.

There would be no more children for Henry and Elizabeth. After the outbreak of the Great War, Henry enlisted with the Prince of Wales’s (North Staffordshire) Regiment at Newcastle Under Lyme as a Private (Regimental Number 16659). He was with the 7th Battalion of that regiment when he died, in Egypt, on 19 September 1915. He was buried at Alexandria (Chatby) Military and War Memorial Cemetery (CWGC website).

Edward, born at Stoke upon Tern in Shropshire, was the second child of Emma Atcherley by her first husband Edward Steventon. Edward senior, a shoemaker or cordwainer, had married Emma in 1885, but passed away aged just 34 in March 1897. He was buried at Newport Cemetery in Shropshire on 3 April. The 1901 census shows Emma and Edward junior living with the family of Emma’s brother Samuel Atcherley (who was himself a widower at that time), along with Sam and Emma’s widowed mother Mary Atcherley and their unmarried brother John. It must have been a relief to all concerned when Emma married William Albert Herbert Thomas at Newport parish church on 27 May that year and (presumably) moved out of the crowded Atcherley household.

Edward Hennery Steventon (as his name was written) appeared on the 1911 census with his mother, stepfather and two half-brothers at 122 Wrekin Road in Wellington. He and his stepfather were both working as farm labourers at that time. A few months later, probably in August 1911, Edward married Ethel Ackland in Stafford, where the couple set up home at 34 New Street. On 12 April the following year Edward, by then a storeman, enlisted with the 6th North Staffordshire Regiment for a term of service of 4 years. His records show that he was engaged in annual training from 4 to 18 August that year. A month later, on 19 September, Edward and Ethel’s only child, Leslie, was born.

4 August 1914 saw the beginning of Edward’s wartime service with the North Staffordshire Regiment. He rose from the rank of Private to Lance Corporal on 27 February 1915, and was attached to 29th Provisional Battalion on 12 June that year. The first half of 1916 saw two further transfers, the second being from 3/6 to 1/6 North Staffordshire Regiment on 19 May 1916 when Edward reverted to the rank of Private. The next day Edward embarked at Southampton; he disembarked at Rouen the day after. He was in France for less than two months before he was reported as wounded, and then as missing. His death was presumed to have occurred on or after 1 July 1916. Most likely he was killed in action during the attempt by the 46th (North Midland) Division to take and retain Gommecourt Wood, near Foncquevillers in the middle of “No Mans Land.” His name, recorded as H Steventon, appears on a memorial at Gommecourt Wood New Cemetery (CWGC website).

Composite image made from parts of three pages from Shrewsbury School Register 1734—1908. Tom’s entry is half way down page 321. Click image to view pages 320-1.

Tom,who was born in Eccles, Lancashire, was the second of three children born to James Pugh and his wife Lucy (nee Atcherley). The Shrewsbury School registers show that he was educated at that establishment from Michaelmas Term 1894, when he was aged about 15. At the time of the 1911 census he was living with his parents and his brother Rennell Atcherley Pugh at Walton in the parish of Stone, Staffordshire. His father James, aged 65, was then a fancy goods merchant and his brother Rennell (29) a potato merchant, while Tom (31) was working as a fancy goods warehouse manager, presumably for his father. Other members of the household shown on the census schedule were two servants (a cook and a housemaid), and a visitor, Ann Jennison Dillon, aged 23 and single, born in Longsight, Lancashire. Less than two years later, at the end of 1912 or in the first quarter of 1913, Ann became Tom’s wife.

Tom and Ann had two daughters, Pauline and Molly, who were both born in Cheshire. It was probably not long after Molly’s birth that Tom joined the Manchester Regiment. The story of his enlistment, and of his death at the Somme in France on 23 July 1916, is told on the More Than A Name website. Tom’s is one of more than 72,000 names which appear on the Thiepval Memorial (CWGC website). Unfortunately, his name is, in error, recorded as Tom Atcherby Pugh (and that error has been repeated by others including the More Than A Name website).

Thomas and Edwin both joined the New Zealand Rifle Brigade (probably on the same day, as they had consecutive service numbers) and fought in the Great War as Riflemen. Edwin’s death, on 22 September 1916, took place during one of the Battles of the Somme. His name appears on the Caterpillar Valley (New Zealand) Memorial near Longueval (CWGC website). A record for Edwin is included in Auckland Museum’s online Cenotaph Database and his digitised service record can be viewed at the Archives New Zealand website. 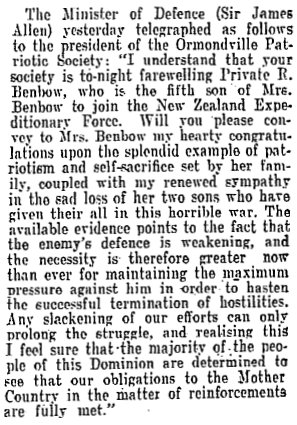 survived until 7 June 1917, when he was killed in action during the New Zealand Division’s successful attempt to retake Messines (now Mesen, in Belgium) from the Germans. His name is recorded at the Messines Ridge British Cemetery (CWGC website). More information and a newspaper photograph of Thomas can be found at Auckland Museum’s online Cenotaph Database and his digitised service records can be viewed at the Archives New Zealand website.

Information about the Benbow family of which Thomas and Edwin were a part can be found on the New Zealand Benbow website. The page includes a photo of Richard Benbow, a brother of Thomas and Edwin, posing in his army uniform with the boys’ mother Ellen. He enlisted, in 1917, shortly after  death of his brother Thomas and so would have been well aware of the possible fate that awaited him. A telegram sent by Sir James Allen, New Zealand Minister of Defence, regarding Richard’s departure for the front, the death of his brothers, and the fact that he was the fifth of Ellen’s sons to join the New Zealand Expeditionary Force, was reported in a number of New Zealand newspapers including the Dominion of 4 August 1917 (see image above, which is out of copyright; click on the image to view on the Papers Past website from where it has been taken). Richard’s service record can be viewed at the Archives New Zealand website, as can those of his brothers William David Benbow and Ormond Benbow.

They shall grow not old, as we that are left grow old:
Age shall not weary them, nor the years condemn.
At the going down of the sun and in the morning,
We will remember them.