A selection of shorter WW1 stories featuring members, most of which I have (since putting this page online in 2011) developed and published on their own pages during the course of the First World War centenary. In time I will replace this page’s contents with a single story.

Service records for the Atcherleys who took part in the Great War are hard to come by, as most of the documents became casualties of the Blitz of World War Two. Fortunately, medal index index cards held by The National Archives (scanned copies of which form part of the TNA’s Documents Online collection and also one of Ancestry’s many record sets) provide the names of most of the Atcherleys who served.

When I first examined these cards, I found there were one or two of the names which I could not assign with certainty to specific individuals. John Atcherley, for example, was a Private and later a Corporal (Regimental Number 10339) with the Kings Shropshire Light Infantry (KSLI). He entered the war in 1914 and so received not only the British War Medal and Victory Medal (examples of which are pictured below) but also the 1914 Star with Clasp and Roses. His name appears, as one of the members of the KSLI who were wounded in 1916, on the War Memorial at Newport in Shropshire. He could have been one of two Atcherley boys named John living in the Newport area, but fortunately a contemporary newspaper report sent to me this year has established that he was a son of Samuel Atcherley, born at Forton in Staffordshire in 1896 and baptised there on 27 December that year. For John’s story, see War wounds: John Atcherley’s World War One.

] (born 2 April 1899 at Childs Ercall and baptised there on the 30th of that month) was probably the Thomas Atcherley who joined the Royal Warwickshire Regiment as a Private and later transferred to the Royal Berkshire Regiment. 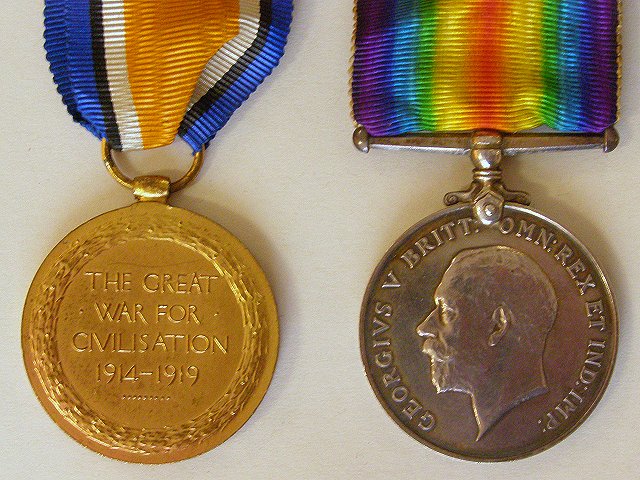 There was another Thomas Atcherley [

] who fought in the Great War in addition to the one described above. This Thomas was descended from the Atcherleys of Stanwardine, and more specifically from the branch of the family which became established in Swindon. A son of Edward Richard Atcherley and his wife Elizabeth (nee Weeks), Thomas was born at Swindon in or just before 1879. By 1914 Thomas was already an experienced soldier, having joined the Wiltshire Regiment in 1898. Surviving records show an eventful career which included service in the Boer War; sadly though it seems that no service or pension records relating to Thomas’ service during World War One itself remain. His medal index card however indicates that he served with three different regiments during the course of the conflict: the Hampshire Regiment, the Wiltshire Regiment and the Royal Engineers.

This story – the first part of it anyway – has now been written up in more detail. See: Brothers in Arms: Four Atcherley siblings in World War One – Part 1.

One of the more remarkable stories from the Atcherley family’s World War One is that of the four Shropshire-born brothers who joined up in September 1914. William Clive Atcherley (born 22 May 1885 at Moortown in the parish of Ercall Magna), Robert Clifford Atcherley (born 1890, also in the parish of Ercall Magna), Eric Graham Atcherley (born 1891 at Waters Upton) and Major Cecil Atcherley (born 1894 at Rodington), were sons of William Henry Atcherley and his wife Charlotte Emma (nee Shakeshaft). All four joined the Royal Engineers. It appears that William (known as Clive), Robert (known as Cliff) and Eric had enlisted together (on 7 September 1914), their Regimental Numbers being 48162, 48161 and 48160 respectively. Clive and Eric both remained with the Royal Engineers and were promoted to the rank of Sergeant. Cecil was a 2nd Corporal who later transferred to the South Staffordshire regiment, where he held the rank of 2nd Lieutenant.

Judging by his Regimental Number (50174) Major Cecil Atcherley enlisted a little later than his brothers. His name must have caused some confusion and a certain amount of hilarity amongst his fellow soldiers (though possibly not amongst his superiors). He held the rank of Lieutenant Corporal and later, like Clive and Eric, became a Sergeant. Whether he claimed superiority over his brothers by virtue of the fact that he was in effect Sergeant Major Atcherley is a matter for conjecture!

Three of these brothers, Cliff, Eric and Major, went overseas to France on the same day, 26 August 1915 and so each of them received the 1915 Star in addition to the British War Medal and Victory Medal. Clive did not serve in a theatre of war and so did not receive any medals, though his service (details of which have recently been revealed by pension records put online by Findmypast) was by no means without incident or injury.

Digitized copies of Chester’s Queen’s School magazine, Have Mynd, provide valuable information on the wartime service of its former pupils Mary Elizabeth Hope Atcherley (usually known by her third forename, Hope) and her sister Hester Mary Eleanor. During the Great War, Hope and Hester, daughters of Richard Topping Beverley Atcherley and his wife Caroline Mary Wynne (nee Foulkes), were ‘VADs’, members of the Voluntary Aid Detachment, from at least 1915 to 1918. The Voluntary Aid Detachment had been created in 1909 by the British Red Cross society and the Order of St John of Jerusalem. Following the outbreak of war in 1914, its volunteers acted as nurses, cooks, clerks and even as ambulance drivers. Hope carried out her VAD duties in Chester, while Hester went to London. The 1916 edition of their school’s magazine reported:

Another member who has come into contact with the hardworking and patriotic girls of the W.A.A.C. [Women’s Auxiliary Army Corps] is Hester Atcherley who is now one of the ‘V.A.D.s’ at the Endell Street Military Hospital, London. She says: ‘We have two W.A.A.C. wards and I am in one now; it is really quite interesting; the girls are real bricks, they have been through such a lot.’

Endell Street Military Hospital, which operated from May 1915 until the end of 1919, was staffed entirely by women and run by suffragists Dr Flora Murray and Dr Louisa Garrett Anderson.

This story has now been written up in full – see Hope and Hester Atcherley’s World War One – Part 1 and Part 2.