] was the highest-ranking member of the family to serve in the Great War. A former officer with the Army Service Corps, he returned to the Army on 5 August 1914 from the Reserve, at the age of 44, as Major L. W. Atcherley, M.V.O. He was immediately given the temporary rank of Lieutenant-Colonel. Anybody who has watched the BBC’s Black Adder Goes Forth may at this point have visions of a character in the mould of Stephen Fry’s General Melchett, a barking buffoon. Nothing could be further from the truth. Although a popular image of the Army that fought the First World War is one of “Lions led by Donkeys,” that image is misleading – and Llewellyn William Atcherley was anything but asinine.

Llewellyn’s first post on resuming military service was that of Assistant Quartermaster-General. This was described in the media as being essentially a “Kitchener appointment .” Llewellyn had served on Lord Kitchener’s staff at Pretoria during the South African war and his powers of organisation had clearly been remembered. The Yorkshire Evening Post reported that his appointment would be “warmly acclaimed throughout Yorkshire” and described Llewellyn, who was then the Chief Constable of the West Riding, as follows: “A fine, upstanding man, as open as the day, Major Atcherley looks like what he is—essentially a man of action, ready to go anywhere and do anything that he conceives to be within his duty.” He would soon find himself living up to that description.

On 18 December 1914 Llewellyn took up the post of Assistant Adjutant and Quartermaster General with the newly-formed 28th Division, under the command of Major-General E. S. Bulfin. This division was one of three which were created with troops returning from overseas, and ensuring that it had all the equipment and horses it needed for rapid mobilisation was to prove a real challenge. At Lord Kitchener’s insistence both the 27th and 28th Divisions were encamped on the Downs at Winchester. Conditions there were terrible. Continuous rain and the movement of so many horses and men turned the camps into quagmires (conditions which were experienced by another Atcherley, see Samuel Atcherley’s World War One). Large numbers of horses became sick due to exposure, and during December some of the 28th Division’s horses were afflicted with an outbreak of mange. All 180 had to be put into isolation and replaced. A shortage of pack saddles and harnesses also had to be overcome. 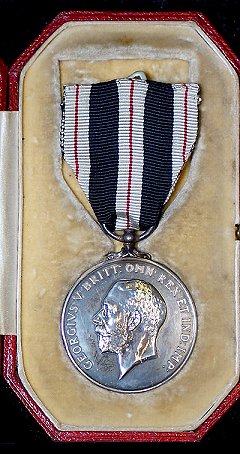 at Winchester, on 12 January, Llewellyn had the pleasure of meeting the King once more, and receiving from His Majesty the King’s Police Medal (an example of which is pictured right). The award of this medal had been formally announced by Whitehall in a notice dated 1 January 1915 and published in the London Gazette on 29 December 1914. The King, who was at Winchester to inspect the 28th Division, was accompanied by Lord Kitchener, Commander Sir Charles Cust, and Major Clive Wigram. It was the Division’s last such inspection before it departed for France. Just a few days after the visit from Kitchener and the King, the units of the 28th embarked at Southampton. They landed at Le Havre from January 16 – 19 before settling in the area between Bailleul and Hazebrouck. Three months later the Division was engaged in battle, a battle in which Llewellyn played a part – even though he was no longer with the 28th.

On 22 April 1915, Lieutenant-Colonel Atcherley was promoted to the temporary rank of Brigadier-General and transferred to the Headquarters of the 5th Army Corps (or V Corps), under General Plumer. Llewellyn had hoped  to return home for a few days at that time, but the start of a deadly offensive by German forces meant that he had to take up his new duties immediately. 22 April 1915 was not only the day on which Llewellyn Atcherley was promoted, it was also the first day of the Second Battle of Ypres.

This battle began with the deployment, by the Germans, of a terrifying new weapon – a cloud of poisonous chlorine gas, greenish-yellow in colour and four miles long. Thousands of troops, mainly French, were killed. Over the following weeks further battles ensued. The last of the four battles that made up the Second Battle of Ypres ended on 25 May. In a little over a month many thousands of men were lost to gas and gunfire. Though the British, Canadian and French forces had fought bravely they lost ground to the German forces, and the city of Ypres, though still in Allied hands, was devastated.

A week after the end of the battle, on 31 May, Field Marshal Sir John French, Commander-in-Chief of the British Army in the field, sent a despatch to the War Office in which he said: “I have the honour to bring to notice names of those whom I recommend for gallant and distinguished service in the field.” Among those names was “Atcherley, Major (temporary Lieutenant-Colonel) L. W., M.V.O., Reserve of Officers.” Llewellyn Atcherley, having been mentioned in despatches twice during the South African war, had now received the same honour in the First World War.

Further recognition of Llewellyn’s service was to follow. With effect from 1 January 1916, Major (temporary Brigadier-General) Llewellyn William Atcherley, M.V.O., Reserve of Officers, Army Service Corps was appointed a Companion of the Most Distinguished Order of Saint Michael and Saint George, “for services rendered in connection with Military Operations in the Field”. Back in Yorkshire, the Chairman of the West Riding Standing Joint Committee declared that every member of that committee would be glad to see their Chief Constable in the list of honours. To laughter from the committee members, the chairman said that Major Atcherley was already an M.V.O., now he was a C.M.G., and if the war lasted much longer (as he feared it would), Atcherley would be so highly decorated that they would not be able to recognise him.

My attempts to track Llewellyn’s progress through 1916 and most of 1917 have yielded very little information. On 22 June 1916, Lieutenant-Colonel H. M. de F. Montgomery was appointed to the temporary rank of Brigadier-General and the position of Deputy Adjutant and Quartermaster-General in Llewellyn’s place, but I have yet to discover what post Major Atcherley took up. Then, with effect from 4 April 1917, “Maj. L. W. Atcherley, C.M.G., M.V.O., Res. of Off.” was granted the honorary rank of Brigadier-General, but once again details of his duties have evaded me.

Llewellyn’s next promotion came on 1 December 1917, when he was given the temporary rank of Major-General while employed as Director of Salvage at the War Office. This role may not sound particularly important. However war is a costly business, not just in terms of lives lost but also in terms of the equipment and provisions that are needed for the armed forces to be battle-ready at all times. The First World War was warfare on a scale that Britain had never seen before, which meant that its cost was also unprecedented. One way to reduce the costs was to salvage damaged equipment and waste materials which would otherwise be discarded, and bring them back into use. 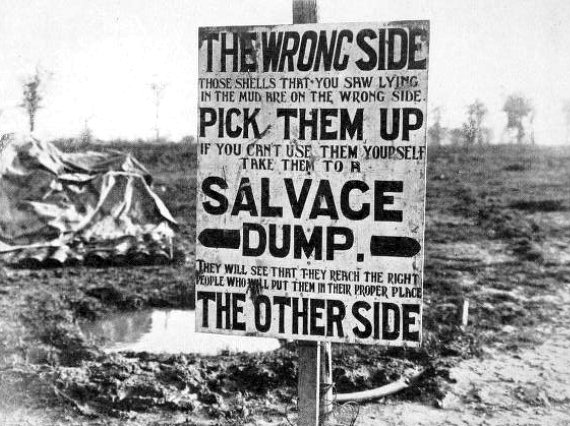 The reclamation of weapons and sale of discarded clothing had been going on since at least 1915, with other initiatives to salve battlefield waste being added as the war progressed. But now, at the behest of Sir John Cowans, the whole process was put on a much more formal and organised footing with the creation of an Army Salvage Board, at the head of which was Major-General Atcherley. The Board’s three functions were described as “the collection of salvage, its transport to British ports, and, when it had been sorted, its reconditioning and reissue.”

American author Isaac F Marcosson, writing in 1918, described this recycling operation in some detail. At the ‘sharp end’ there was “Battle Salvage, which deals with the debris of actual fighting and includes all trench materials such as wood and iron, shell-cases, guns, rifles, equipment, clothing, tools and other stores that have been damaged in actual fighting.” There was also “so-called Normal Salvage, which is material such as empty packing cases, [fuel] cans and other articles which never reach the battlefield.”

Material reclaimed at the front went to salvage depots for initial screening and sorting. Where items could be cleaned up and returned to service on the spot, that is exactly what happened. Clothing and equipment in need of repair, and materials such as metals which could be used for the manufacture of new equipment, went off to appropriate destinations for processing, often on the vehicles and ships which had brought everything out to the theatre of operations in the first place.

In March 1918 the wartime recycling campaign went a step further, with the creation of a National Salvage Council “to deal with the problems of civil salvage and the recovery of waste products generally.” To guide the Council’s work an executive board was set up, with representatives from the Local Government Board, the Ministry of Food and Board of Agriculture, and three military men including  the Controller of Army Salvage, Major-General Atcherley. 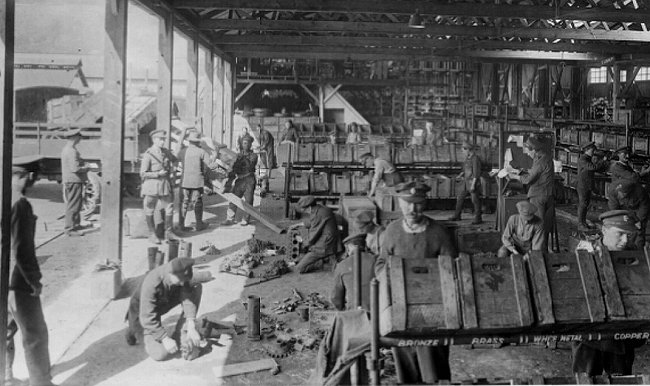 Llewellyn’s work in this field was recognised in the form of an honour from the King, and a promotion from the War Office. On 31 May 1919 Llewellyn, already a Member of the Royal Victorian Order, was made a Commander of that order. Following this, his temporary elevation from the rank of honorary Brigadier-General was made permanent when he was made an honorary Major-General on 10 June.

At a meeting of the West Riding Standing Joint Committee on 19 June 1918, a letter from the War Office was read out. Major-General Atcherley had completed his organisation of the Salvage Department, and the Army Council was willing to release him. In so doing, the Council placed on record “their very high opinion of the manner in which he had carried out the duties, both in the field and at the Headquarters of the Army.”

The Chairman added that he had also received another letter regarding the West Riding’s Chief Constable. The letter was from the Home Secretary, who stated that Sir Leonard Dunning, one of His Majesty’s Chief Inspectors of Constabulary, was suffering from severe illness. He asked that General Atcherley should be allowed to take up Sir Leonard’s duties in conjunction with his own in the West Riding. Though the committee probably did not realise it at the time, their agreement to the Home Secretary’s request would send the career of major-General Llewellyn William Atcherley, C.M.G., C.V.O., in yet another direction. (See Llewellyn William Atcherley, Inspector of Constabulary.)