I remember one occasion when Batchy sat with us over a flying supper in the early hours of the morning, and said, pointedly, ‘Flying is a young man’s game. You chaps are about right, I am too old for it.’ Soon after that, he left us to command Kenley …

] arrived at RAF Kenley, Surrey, in 1942, he was returning to familiar territory. He had been stationed at that air base from December 1929 until October 1930 as a Flight Lieutenant with 23 (Fighter) Squadron. Now however he was taking on the role of Sector Commander. He was – in  his own words – “rushed in to take over from Victor Beamish who had just been killed in operations.” The death, in action, of Beamish had occurred on 28 March 1942 during an aerial battle with German aircraft just south of Calais.

James Edgar (“Johnnie”) Johnson, who flew from Kenley after Batchy’s time there, nonetheless found that this inventive Atcherley had left his mark. Situated in a built up area, Kenley was difficult for pilots to find in poor weather. However, Johnson discovered that Batchy “had erected a series of tents around the circuit and painted them white. If you saw the tents you just kept turning inwards and the runway appeared!” Though this was not the first of Batchy’s experiments with landing aids, it was one of the first that Johnson had encountered.

Kenley under Richard Atcherley was a port of call for another of the RAF’s renowned pilots (who later, like Atcherley, became an Air Commodore), Pete Brothers. Brothers was Officer Commanding, 602 Squadron., which operated from Kenley from 30 June until 8 July 1942. In his biography of Brothers, Nick Thomas wrote:

It was at about this time that Brothers and his old friend Richard Atcherley marked their reacquaintance; ‘He and I celebrated in London, after which he insisted on lying flat on his back, in the “blackout,” in the middle of the road near Hyde Park Corner.’

He was approached by a ‘bobby’, who shone his torch on the Group Captain, lying prostrate with his ‘scrambled-egg’ cap on his chest, requesting, ‘Do you mind just getting up and going home, Sir?’

To which Atcherley replied, ‘Can’t you see I am King George the Fifth lying in State?’

The pair made their way to their hotel in the small hours without attracting the further attention of the officers of the law, reporting for duty the following morning bright and breezy.

A picture of what life was like at Kenley under Richard Atcherley’s command is provided by author Philip Kaplan, writing about Brian Kingcome:

In the summer of 1942, Brian Kingcome was posted to Kenley to take over as Wing Commander Flying. His Command was known as the ‘Canadian Wing’ and was made up of Nos 401, 402, 412 and 416 Squadrons and, at last, he felt he had landed in a virtually perfect situation. The Station Commander at Kenley then was Group Captain Richard Atcherley, a man Brian liked and respected, and he had charge of four fine Spitfire Squadrons.

The job of the Kenley Wing was two-fold: fighter sweeps penetrating as far over France as they could go, attempting to lure German fighters into combat; the other to provide fighter escort protection for the heavy bombers of the US Army Air Force in their daylight bombing missions at a point in the war when the Americans could muster relatively few planes and crews to face a powerful Luftwaffe on the defensive. Due to the still quite limited range of the Spitfires available at the time, Kingcome’s pilots could only shepherd the bombers during the first, and least vulnerable portion of their missions, or rendezvous with them for that same part of the return trip. For the rest of the journey, the bomber crews were largely on their own, reliant on their own gunners and their clever ‘box’ formations for protection through maximum cross-fire.

Kingcome (pictured left) had transferred to Kenley from 72 Squadron, based at Tangmere in Sussex. On 26 May 1942, shortly before his transfer, he was, with his Squadron, en route home from a ‘sweep’ over France when he received a message from the Controller at Biggin: “Hello Brian. Grandad next door has fallen in the drink.”

‘Grandad’ was Group Captain Richard Atcherley. Owen Hardy, who was flying with 72 Squadron at the time, has described the events as follows:

… on the particular day we were returning from the sweep, in which the Kenley wing took part also, Batchy decided he would take-on the Luftwaffe all on his own with a little bit of help from the Operations Controller at Kenley. His plan was to sit high up over the channel in the hope of catching any Germans who might follow the sweep Squadrons out of France. The Controller kept warning him that there were possible hostiles nearby and advising of their height.

Batchy was higher than the altitudes being passed to him and kept on searching about below. What Batchy did not know, however, was that experience had taught us to add on another eight to ten thousand feet to the operations room plots: this to compensate for the time delay in passing information from the radar stations through a complex reporting system to the Operations Room. Good Controllers would often make allowances for this when passing positions but height and direction of plots were more difficult for them to interpret.

Batchy was a wonderful pilot but clearly the game he was now playing was out of his league in both age and experience. Bang! Batchy had learnt the first important lesson in fighter combat and was very lucky not to pay the supreme price for not keeping a careful watch on his tail.

Atcherley, who had been flying a Mark Vb Spitfire, serial number BM235, largely agreed with Owen Hardy’s account above when he recalled the events of May 1942, years later. He admitted that he was “not au fait with the Spitfire” and had “never done any air-to-air firing in the whole of [his] service”. Looking back, he concluded that he was “clearly a potential ‘Iron Cross’ to any German pilot who cared to have a crack” at him. He gave the following account of the moments when ‘the Hun’ nearly finished him off:

I was just starting to ‘orbit’ to the right when I caught sight of a FW190 right behind me, and two others a bit further back and above. I was too late: I started an immediate turn in the opposite direction, but was cold meat. I heard his cannon strikes and saw my dashboard splinter […]. For an unconscionable number of seconds I seemed to be receiving the full blast of four cannons. I saw everything and heard everything, but in the excitement of the moment felt nothing—although in fact I was hit down my throttle arm by an explosive shell. The armour plate behind my seat made a noise like a drum, but gave me full protection.

The engine packed up, the cockpit started to smoke and I soon had no control with my elevators. My wheels dropped as my hydraulics packed up, and the aircraft turned into a right-hand spin. I realised I would have to bale out and tried to send a ‘May Day’ call, but not surprisingly my radio was hit. I slid back the canopy, unstrapped myself and tried to raise my trunk to get my head and shoulders out into the slipstream. To my concern, I was held a few inches from my seat by some unseen obstruction. I tried repeatedly but of no avail and I forlornly came to the inevitable conclusion that I was ‘for it.’

Fortunately, one last try at getting up and out of the cockpit was successful and Batchy flew out – only to find himself sitting on the wing of his stricken ‘plane. A wriggle backwards and he was in the air again, colliding with the tail plane on his otherwise rapid move away from the doomed Spitfire. He pulled the ripcord of his parachute, floated down into the Channel, and swam to the inflatable dinghy which had left his aircraft with him. 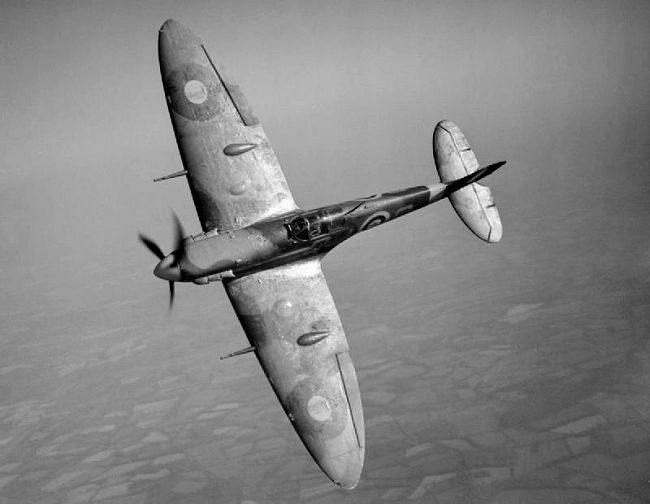 On 3 June 1942, The Times reported that “Group Captain L. R. Atcherley” was in hospital recovering from wounds “received during a recent fighter sweep.” His wounds were “not serious”, but he had had a “lucky escape.” The report went on: “His machine was shot down over the English Channel. Pieces of shell tore through his shoulder, continued down his left arm, and ripped the flesh from a finger, fortunately without touching the bone. Atcherley continued flying as long as possible and then baled out. After being in the water for some time he was picked up by one of our rescue launches.”

Initially admitted to Dover General Hospital, Batchy was transferred to the Queen Victoria Hospital at East Grinstead the next day. This hospital was developed during World War 2 into a specialist unit which pioneered reconstructive surgery for RAF and Allied pilots, especially those suffering from burns. During his stay there, Richard Atcherley underwent three operations for his wounds, earning himself membership of the ‘Guinea Pig Club’. (Follow the links in the References section below to learn more about the Guinea Pigs and their surgeon Sir Archibald McIndoe.)

Many years later, Batchy added an additional, amazing angle to the story of his shooting down when in conversation with W G G Duncan Smith, who wrote:

“A strange thing happened that day,” he said. “At the precise moment when I was hit in the arm, my brother, David, who was sitting in his office at Fairwood Common, where he was then the Station Commander, felt a piercing pain in his left arm. He shouted to his Adjutant to get through to Fighter Command and ask the Duty Controller in the Operations Room whether I was OK. He was told that as far as was known, I was ‘in the pink’ at Kenley minding my own business.

’Find out for sure,’ my brother insisted, ‘I think Group Captain Atcherley has had a serious accident and hurt his arm rather badly.’

Twenty minutes later the Sector Controller at Kenley telephoned David and told him I was overdue, missing from a reconnaissance flight over the Channel.”

According to Duncan Smith, “It was not until Batchy had been rescued from the sea and delivered to the casualty clearing station at Dover Castle that David learned the details of his brother’s wounds. The centre of pain he had felt in his arm was in the exact place that Batchy had been hit by the enemy’s cannon shells.”

See also: Richard (“Batchy”) and David Atcherley in the Pictures section of this website.