The family of Atcherley of Marton has been settled in that neighbourhood at least as far back as the reign of Henry VII. Their ancestor, Sir Roger Atcherley, Knt., who was born at Stanwardine, in the parish if Baschurch, within about a mile from Marton, was elected sheriff of Middlesex and London, 21 Sept. 1504, 20 Henry VII., and was chosen lord-mayor of London, 18 October, 1511, 3 Henry VIII. He is mentioned in Fuller’s Worthies […], and also in Stow’s Survey of London […], as having munificently stored Leadenhall for the relief of the poor. He filled several civic offices of high trust with distinction, and died in the month of July, 1521, 13 Henry VIII.

– A genealogical and heraldic dictionary of the landed gentry of Great Britain and Ireland, 1847.

I could take issue with a couple of the ‘facts’ about Roger Atcherley in the paragraph above – in fact, in due course, I will! But John and John Bernard Burke’s brief pen picture of Roger provides a good starting point for a more detailed look at a life which ended nearly five centuries ago. That a more detailed look is even possible is quite something, given the period in which Roger lived. For that we have to thank, in part, the fact that he did indeed fill several civic offices of high trust with distinction. 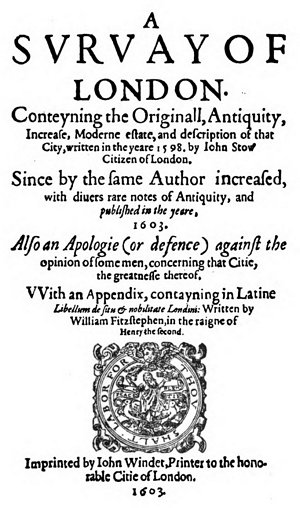 To find the surviving texts and other records relating to Roger, as a public figure, as a businessman, and as a family man, we have to abandon any notion that his surname was, either during his lifetime or for a good many years thereafter, written as Atcherley. John Stow, for example, in the above-mentioned Survey of London, wrote as follows (I have amended the text only by changing letters ‘u’ to ‘v’ and an ‘I’ to a ‘j’, where appropriate, for ease of reading):

Roger Achley Maior of London, in the yeare 1512. the third of Henrie the eight, when the said Maior entered the Maioralitie, there was not found one hundred quarters of wheate in all the Garners of the Citie, either within the liberties, or neare adjoyning: through the which scarcitie, when the Carts of Stratford came laden with bread to the Citie (as they had beene accustomed) there was such presse about them, that one man was readie to destroy an other, in striving to bee served for their money: but this scarcitie lasted not long: for the Maior in short time made such provision of Wheate, that the Bakers both of London, and of Stratford were wearie of taking it up, and were forced to take much more then they would, and for the rest the Maior laid out the money, and stored it up in Leaden hall, and other garners of the Citie. This Maior also kept the Market so well, that hee would be at the Leaden hall by foure a clocke in the Sommers mornings, and from thence he went to other markets, to the great comfort of the Citizens.

Stow also wrote Roger’s surname as Achiley, in his list of Mayors and Sheriffs, stating: “Mayor Roger Achiley Draper. This Roger Achiley provided corn for service of this Cittie in great plentie: Hee caused the same to be stowed uppe in the common Garner called Leaden Hall.” Others added an extra ‘l’ to Achiley, giving us Achilley – as in A Breviat Chronicle containing al the Kynges from Brute to this daye (published 1554), an extract from which is shown below.

Later authors, including Thomas Fuller in his History of the Worthies of England, borrowed from Stow but their accounts diverged from the source material. I have not seen a copy of Fuller’s original work (published posthumously in 1662), but a later edition of 1684, edited by George Sandys, had this to say under the heading “Benefactors to the Publick”:

Sir Roger Achley, born at Stanwardine was Mayor of London 1511. Observing that poor People, who never have more than they need will sometimes need more than they have, [prepared] Leaden-Hall, (the Common Garner) and stored up much Corn therein, collecting from the present Plenty, a relief against an ensuing Famine.

As you can see, Stow’s report of a scarcity of wheat in the capital, which Roger remedied, disappeared in Fuller’s version of events. In that version, Roger simply stocked up the granary during a time of plenty to safeguard his fellow citizens from a future famine. This story was then retained (and embroidered upon) in later reprints of the Worthies. An 1840 edition opened the tale of Roger’s good deed by asserting that “He beheld the whole city of London as one family, and himself the [Mayor] 1511 (for the time being) the master thereof.”

Whether or not Roger saw himself as the master of a city-sized family I can’t say, but it does seem that he dedicated his mayoralty to improving the lives of Londoners. For a second example of Roger’s work as mayor – and yet another spelling of his surname – we return to John Stow’s Survey of London, and his account of the postern (a secondary entrance in the city walls) known as Moorgate (or Moregate):

In the yeare also, 1511. the third of Henry the eight, Roger Achely Mayor, caused Dikes and Bridges to bee made, and the ground to bee leviled, and made more commodious for passage since which time the same hath beene heighthened. So much that the Ditches and Bridges are covered and seemeth to me that if it be made levell with the Battlements of the Cittie Wall, yet will it be little the dryer, such is the Moorish nature of that ground. 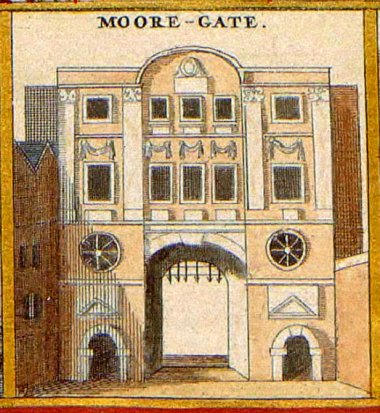 A later author, possibly using Stow’s work as his source, wrote that the improvements at Moorfields, to which Moorgate provided access, were made “through the praise-worthy attention of Roger Acheley, Lord Mayor in 1511, who caused that waste to be better drained and levelled, and had bridges made to improve the outlets to the adjacent villages.” Moorfields was one of the last areas of open ground in the city, presumably because of the great wetness of the ground referred to by the above writers. Roger’s efforts seem to have been among the earliest to make the Moorfields area easier to cross. Moorgate has long since been demolished (the picture here dates from around 1650), and Moorfields drained and built over. Today the area is a financial centre.

Did you notice another version of Roger’s surname in the previous paragraph? Acheley seems to have been the most frequently used spelling in official or public records relating to him. An example of this from the time when Roger was Lord Mayor was catalogued as part of the letters and papers of the third year of the reign of Henry VIII; it is dated 12 October (1511):

Other such records relate to Roger Acheley’s service as an Alderman and as a Sheriff of London – positions which were, by Roger’s time, prerequisites for becoming Lord Mayor of the City. The rule that all Mayors must have held the office of Sheriff had in fact been introduced back in 1385. The requirement that the Mayor must be an Alderman of a London ward came into effect in 1435. These conditions remain in place to this day, though it should be noted that they apply only to the office of Lord Mayor of the City of London. (The Mayor of London is an entirely separate office, for Greater London, created in the year 2000; the holder of that position is elected by popular vote to serve for a term of four years.)

Just as Roger served his year as Lord Mayor from 1511 to 1512 with two Sheriffs (Nicholas Shelton, a mercer, and Thomas Myrfin, a skinner), so he had served as Sheriff (along with William Brown) when John Winger (or Wynger, a grocer) was Mayor from 1504 to 1505. As a Sheriff, Roger would have gained experience of the workings of the Sheriffs’ Court, and probably also the Mayor’s Court (the Mayor was the Chief Magistrate for the City of London). This would have stood him in good stead for his later role. Indeed, the requirement for a Mayor to have previously acted as a Sheriff was introduced specifically “to the end that he may be tried as to his governance and bounty, before he attains to such estate of the Mayoralty.”

It was the duty of the Sheriffs to “inspect the prisons, summon juries, keep the courts of law, and execute all writs and judgements.” Each Sheriff had his ‘Compter’ or prison for debt (one at Wood Street, and one at Poultrey). Each Compter had its own judge and supporting legal staff, and held two court days each week (except on festival days, and during three weeks at Christmas, plus a week at Easter and Whitsun). Courts were also held at the Guildhall. In addition, each Sheriff had under his charge 16 Sergeants and 16 Yeomen, who could make arrests following actions entered at the Compters or at the Court. (The Yeomen however were not allowed to make arrests without a Sergeant being present.)

The City of London’s Sheriffs were elected each year by Liverymen of the City Livery Companies. This remains the case today, although of course the roles of the Sheriffs are now rather different! At least one of the two is an Alderman, a freeman of the city elected by the City’s wards. Aldermen, elected for life, were described in 1826 as “the principal magistrates in their respective wards” and “perpetual justices of the peace for the City.” Roger Acheley, was elected Alderman for Vintry Ward in 1504, not long before he was also elected Sheriff by his fellow liverymen. He removed from Vintry to Coleman Street Ward in 1510, and from there to Cornhill Ward in 1513. He continued as Alderman for Cornhill until his death in 1521. 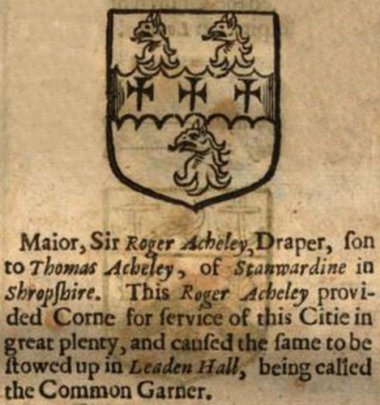 As we have just seen, to be elected as an Alderman, Roger Acheley was required to have been admitted to the Freedom (or citizenship) of the City. This could only be attained through membership of one of the Livery Companies. It has already been noted that Roger was a draper – so it should come as no surprise to learn that he was a member of the Drapers’ Company.

Roger was ‘admitted to the Freedom’ by servitude – which means that he completed an apprenticeship with an existing member of the Drapers’ Company. This was back in 1479. Not long after, he settled in Cornhill. Within a few years, he had taken on an apprentice of his own – the first of several. He would go on to serve as Warden and (on two occasions) Master of the Drapers’ Company. This aspect of Roger’s life, however, deserves a story of its own.

Picture credits. Title page of Stow’s A Survey of London (1603): From a 1908 reprint of the work; copyright expired. Extract from A Breviat Chronicle containing all the Kynges from Brute to this daye, published 1554, taken from Google Books. Moore-gate: Adapted from a public domain image taken from Wikimedia Commons. Extract from a 1633 reprint of Stow’s A Survey of London, taken from Google Books.