The Grocers’! oh the Grocers’! nearly closed, with perhaps two shutters down, or one; but through those gaps such glimpses! It was not alone that the scales descending on the counter made a merry sound, or that the twine and roller parted company so briskly, or that the canisters were rattled up and down like juggling tricks, or even that the blended scents of tea and coffee were so grateful to the nose, or even that the raisins were so plentiful and rare, the almonds so extremely white, the sticks of cinnamon so long and straight, the other spices so delicious, the candied fruits so caked and spotted with molten sugar as to make the coldest lookers-on feel faint and subsequently bilious. Nor was it that the figs were moist and pulpy, or that the French plums blushed in modest tartness from their highly-decorated boxes, or that everything was good to eat […]

One of several members of the Atcherley family who entered the grocery trade, Roger was the first child of publican and veterinary surgeon James Rennell Atcherley (see James Rennell Atcherley: A life and death with horses) and Emma, née Broadfield. Roger was born at Bridgnorth, Shropshire, on 15 March 1831, and baptised at Bridgnorth St Leonard (pictured below as it appears today) on the 29th of that month, at which time the family was living in Hungary Street. Ten years later when the 1841 census was taken, the growing family was enumerated at St Mary’s Street – reflecting not a move, but a change of street name. Roger, aged 10, was recorded there alongside his parents, his younger siblings James, Mary and Isabel, and three servants. By the time of the next census in 1851, Roger was at work.

Roger had no farm to inherit. It is unclear whether it was due to inclination or lack of aptitude on his part that he did not follow his father into veterinary practice, his uncle (Dr John Atcherley) into medicine, or his grandfather (the Rev Roger Atcherley) into the church. Evidently a military way of life did not appeal either. Instead, Roger pursued a mercantile career and became a grocer – a very successful one too.

The Victorian grocer’s stock in trade was described by Kelley Graham (in her 2008 book Gone To The Shops: Shopping In Victorian England) as follows:

Grocers sold things which we call kitchen staples: sugar and salt, flour and meals, yeast, vinegar, butter, cheese, fresh and preserved or ‘potted’ meats, condiments and relishes, preserves and spreads, dried beans, coffee and tea, bread, gingerbread treats, and some of the more common fruits like grapes, and dried fruit like [currants] and raisins. Grocers also carried a good deal of everything else for the household, including crackers and bread, cheese and eggs, soap and candles, washing soda, mousetraps, and stove polish.

Back when I first collated all the England and Wales census appearances of members of the Atcherleys, Roger was nowhere to be found in 1851. This was because the schedules for most of Manchester had been damaged in a flood, which had left them in a fragile and largely unreadable state. However, thanks to painstaking work by the Manchester & Lancashire Family History Society and help from Ancestry, the records of thousands of Manchester’s ‘Lost Souls’ were eventually revealed. Among them was Roger Atcherley.

Roger was living and working at 256 Deansgate in Manchester, one of ten journeyman grocers whose relationship to the head of the ‘household’ was listed in each case as ‘servant’. The ages of these men ranged from 15 to 29, with Roger’s recorded as 21 (he was in fact 20, and for good measure his place of birth was given as Whitchurch in Shropshire instead of Bridgnorth!). There was also a domestic servant who presumably kept the grocers’ living quarters in order. But no head of this particular household was present. Who was Roger working for?

A little digging in the digitised pages of old newspapers shows that in early 1851, the premises at 256 Deansgate were, along with those at 4 Victoria Street in Manchester, run by one William Tebbutt. Advertisements placed by William in the local press around that time highlight some of the wares offered by his business: 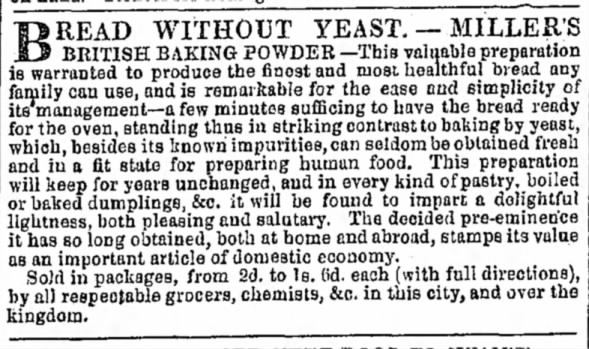 We can all too easily read far too much into censuses. All that can be said for certain in respect of Roger Atcherley’s appearance on that of 1851 is that he was living at 256 Deansgate, Manchester, and working as a grocer at the time when the census was taken. It is however possible that this was where he was introduced to the grocery business, and where he was taught the tricks of the trade before moving on and going into business on his own account.

I don’t know exactly when Roger opened his own shop, but he had done so before 1855. This is evident from a notice published in The Manchester Guardian of 20 January that year, which stated: “TO BE LET, a Good GROCER’S SHOP and HOUSE, in a first-rate situation; a fine opportunity for an enterprising man.—For particulars, apply to R. ATCHERLEY (late Ashworth), grocer, opposite St. John’s Cathedral, Chapel-street, Salford.” The next notice from Roger which I have found was published in the same newspaper on 10 February 1855: “WANTED immediately, an ASSISTANT to the Grocery Business. Apply at Atcherley’s, 17, White Cross Bank, Chapel-street, Salford.”

Within three months of second of the above notices, Roger’s name appeared again in the local press. This one explains why I used the term ‘tricks of the trade’ a little earlier – grocers and other traders were not averse to indulging in some dodgy dealings to boost their profits! On 5 May 1855 The Manchester Times reported, under “Illegal Weights and Measures”, “The following cases were heard and fines inflicted, at the City Police Court, on Friday, […] Roger Atcherley, grocer, Rochdale Road, two pairs of unjust scales, £1. 10s.; […]”.

Roger was one of 20 traders (mainly provision dealers but also carriers and coal dealers) who were fined that Friday for using illegal weights and measures. Four of the traders in question had at least one previous conviction – one of them had six! Clearly the fines levied were not much of a deterrent – I can only assume that the costs inflicted by the courts on ‘rogue traders’ for fleecing customers were outweighed by the extra money they made.

During the above period, Roger was also convicted of a different offence, and fined considerably more than £5. In this case, he may have believed he was in the right, and the judge thought mitigation was appropriate when fining him. The case, heard at Salford Town Hall (nowadays the old town hall, pictured above), was reported by The Manchester Guardian of 21 May 1857 as follows:

Coffee and Chicory.—Mr. Atcherley, grocer and tea dealer, Chapel-street, Salford, was summoned by the Board of Inland Revenue for selling a mixture of coffee and chicory as ‘pure’ coffee. Mr. Robinson appeared on the part of the Board, and Mr. Cobbett for the defendant. An excise officer went into the shop of Mr. Atcherley, and asked for a quarter of a pound of pure coffee. An assistant handed him a packet, and he paid for it. He found it labelled ‘coffee and chicory,’ and remarked that he had asked for ‘pure’ coffee. The assistant offered to change it, and said he had misunderstood him; but the officer told him that he had purchased it for the government, and that the label on it would not prevent him laying an information against him. A portion of the coffee was given to Mr. Marshall, assistant analytical chemist for the Board, and was found to contain 25 per cent of chicory. The mitigated penalty of £25 was inflicted.

An almost identical case, involving grocer Joseph Cadman, was heard the day before that of Roger Atcherley. A report on that hearing in The Manchester Courier and Lancashire General Advertiser gives some background on the then confusing legal situation regarding the mixing of coffee and chicory:

[…] Mr. Cobbett contended that the state of the law upon this question was monstrous, inasmuch as although there was an act of parliament in existence prohibiting grocers selling chicory with coffee, since 1840 there had been no less than five orders issued by the Board of Inland Revenue, permitting the sale of chicory with and without coffee, under certain restrictions. He called Benjamin Holden, foreman to Mr. Cadman, and Arthur Hilton assistant, who each said that the excise officer did not ask for ‘pure coffee,’ but for coffee, and when coffee was asked for it was the usual practice to sell it mixed with chicory, with the usual label upon it. —Mr. Maude agreed with the remarks which had fallen from Mr. Cobbett, and he thought that it would be better if the sale of chicory were legalised by act of parliament. He considered, however, that the case had been made out by the excise, and convicted the defendant in the mitigated penalty of £25—one fourth the full penalty.

Roger was also on occasion a victim of crime, as this report published in The Manchester Courier and Lancashire General Advertiser on 6 December 1862 shows:

Stealing a Tub of Butter.—At the City Police Court, on Thursday, James Stewart was charged with having stolen a keg of butter belonging to Mr. Roger Atcherley, Whitecross Bank, Salford. Detective inspector Shandley saw the butter on a cart which was being driven along the London Road on Wednesday afternoon. The prisoner accompanied the cart, and shortly afterwards Shandley saw him take the butter from the cart and remove it to the side of the road. Shandley asked him to account for the butter, when he admitted that he had [been overcome?] by hunger. The officer remarked that he surely could not eat a tub of butter, and asked why he did not go to the guardians or to a relief committee. The prisoner made no reply. He pleaded guilty, and was summarily committed for four months.

That sentence, incidentally, was “Four Cal. Months Hard Labor” according to the entry for James Stewart in the register of Belle Vue Prison, West Gorton (Manchester City & Borough Gaol).

Despite his brushes with the law in the early years of his career, Roger Atcherley went on to become a respectable tradesman, and a respected member of his community. He also became a husband, and a father to eight children. This story of Roger Atcherley’s professional and personal lives is to be continued!