RootsTech London was an amazing event, and I got a lot out of it – including a truly awful cold which I am still trying to shake off! Hence the unforeseen delay in concluding my report on Britain’s biggest genealogy event of 2019. Now, where was I? Oh yes….. 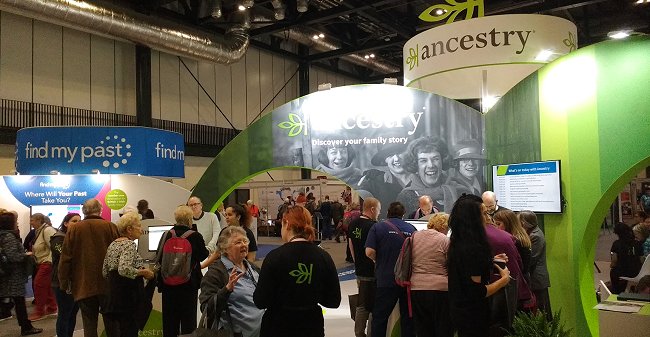 I took in more classes today, five in total. Some I chose for their relevance to my Atcherley research, others ‘made the cut’ because they struck me as being likely to educate more generally. In the former category were two talks by Simon Fowler, an expert on military genealogy; my day therefore began with a quick march to his 09:00 briefing on “Researching men and women who served in British Forces during the Second World War.”

Later, at 13:00, we went “Over the top: researching your First World War genealogy.” I have of course already written extensively about Atcherleys caught up in World War 1, but I still have more Great War stories to explore and tell so it was good to ‘gen up’ on WW1 research. To find out more about the research (and other services) Simon offers, visit Simon Fowler, The History Man.

DNA – and Jonny Perl – featured once again in my schedule, with Jonny looking specifically at “Examining your DNA matches with DNA Painter”, a popular online tool developed (and continually being enhanced) by Jonny himself. It was great to be able to benefit from Jonny’s ‘Perls’ of wisdom (surely nobody has cracked that joke before?)! More online tools, but of a very different nature, were the subject of “Save and share online information: 5 tools for the connected genealogist”, presented by Sophie Boudarel of FrenchAncestors.com. I hope, in the weeks and months ahead, to try putting into practice some of the things I saw demonstrated during both of these talks.

Without question, the highlight of Day 2’s schedule for me was Dave Annal’s talk “My ancestor was a liar: Ignorance, half-truths and wilful deceit.” A fair proportion of our ancestors knowingly gave false information, at one time or another, to officials such as census enumerators, registrars and clerks, often to cover up ‘shameful,’ embarrassing or awkward truths about illegitimacy, marital status, or age differences between couples (to give but a few situations which encouraged ‘fake news’ in our family histories). With many excellent examples of people from the past who stretched or completely broke the truth, Dave (of Lifelines Research) explained how, why and when our ancestors might lie, and how to see through their deceptions. 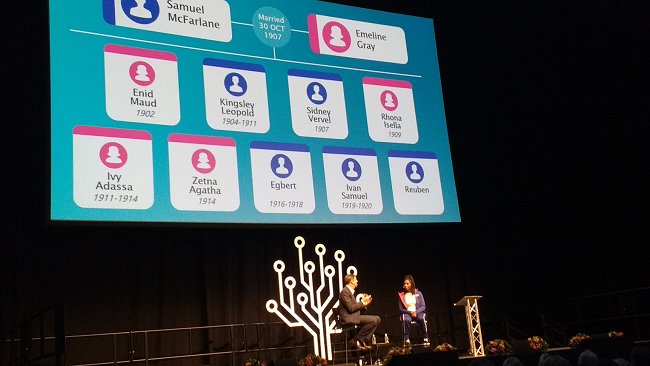 Up on stage for the day 2 keynote session were Steve Rockwood, CEO of FamilySearch, and Paralympian Kadeena Cox. These two appeared separately and then together, when Steve interviewed Kadeena and shared a little research which expanded the family tree she had begun. Kadeena’s story was, as expected, inspirational: refusing to let the double-whammy of a stroke and then a diagnosis of multiple sclerosis stop her pursuit of world-class athletics, she entered para-athletics in 2015. At the same time she began cycling competitively too. So successful was Kadeena in both endeavours that in 2016 she achieved the unique distinction of becoming a world champion in two different sports – and went on to take gold in the T38 400m sprint and the C4-5 time trial cycling event at the Rio Paralympics. Respect! Kadeena attributed her determination to her family background and in particular the example set by her hard-working mother. You can find out more about Kadeena at the ParalympicsGB website and of course at Wikipedia.

I struck gold myself (genealogy gold that is) amongst the stands in the exhibition hall, in between being inspired by superb speakers. After renewing my acquaintance with Marie Cappart of Histoires de Familles, and mentioning to her that I had ‘lost’ an Atcherley in France, I managed to find my lost Atcherley through RootsTech attendees Filae.com. The Atcherley in question was Ann Isabella, daughter of Rowland Atcherley, MD, and Ann Compton, née Du Moulin.

As we saw in Camille Casimir Breton and Ann Compton Atcherley: The French connection, Ann Isabella Atcherley went to France at the end of the 1850s with her mother and stepfather – never to be seen (in English records at any rate) again. However, by tapping ‘Atcherley’ into the Filae database search box via a terminal on their stand, I found Ann (or Isabelle as she became known) on an 1872 census, living in Boulogne-sur-Mer – and I also found a record of her death, in Paris, in 1882. Wow! Filae bill themselves as “the world’s largest resource for French archives” with “2 billion names just a click away!” Their website certainly helped me.

At the risk of sounding like I have been stalking a certain genealogist, I hereby confess that I began the third and final day of RootsTech London by attending yet another class presented by Jonny Perl! (He hasn’t taken out a restraining order on me – yet – so I think I’m OK.) “Inferred matching techniques for chromosome mapping” followed on neatly from yesterday’s session on DNA Painter. To quote myself, posting on Twitter immediately after the class, “I think I’m beginning to get my head around this concept as a result and look forward to trying to put it into practice!”

The only other class I attended on Day 3 was also DNA-related. In “The power of siblings”, genetic genealogy guru Donna Rutherford showed how variations between the DNA test results of siblings can, together, give us a more balanced and much deeper insight into their family’s ancestry. 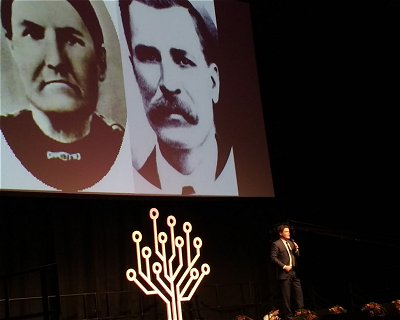 Despite making jokes, in advance of RootsTech London, that I would be avoiding Donny Osmond, I did in the end attend his keynote on this, the final day of the show. It was after all part of the RootsTech experience, and actually quite enjoyable! Donny is no stranger to RootsTech, having delivered a keynote at the 2015 General Session of the show in its home town, Salt Lake City. Nor is he a stranger to the show’s organising body, the LDS church, being raised as a member of the church. He is the custodian of his family’s genealogy. With that background, and with his ongoing popularity as a singer and entertainer on both sides of the Atlantic, he was the natural choice to headline RootsTech London. 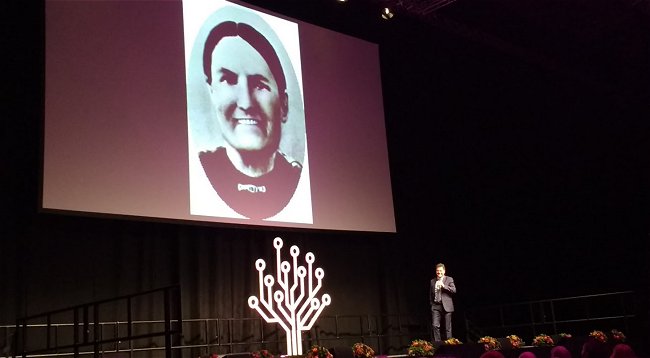 So of course, Donny sang (he’s actually not bad). And he told us about his roots here in the UK, focussing particularly on his Welsh great great grandparents Elizabeth Williams and Thomas Davies (see the above pictures; in the second one, Donny has given Elizabeth the Osmond smile she was so sadly missing!). He also told us about his parents and his siblings, and with the aid of video clips, he told us about his own life, starting with his first TV appearance at the age of five. And he made a point. His life has been recorded in great detail, and his descendants will inherit a treasure trove of memories. What memories of our lives will we leave for future generations? 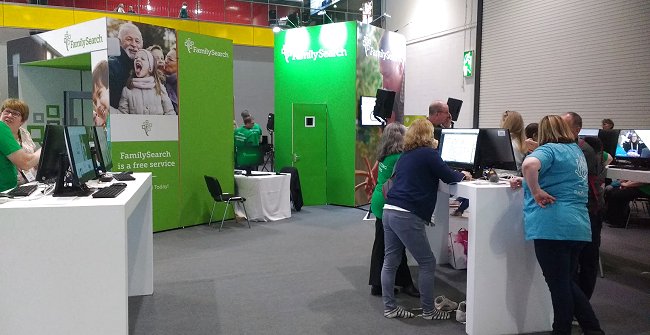 Given that FamilySearch was organising the event, and had a big presence in the exhibition hall, it made sense to make the most of the resources they had on offer. Especially as their banks of computer screens were effectively a temporary Family History Centre, giving access to records not available to the general public outside of those centres. With that in mind, I decided to use this facility to have a look at digitised microfilms of Bishops Transcripts of some Shropshire parish registers. In the case of Ruyton-XI-Towns, for example, the earlier registers no longer exist and the Bishops Transcripts are all that survive of the records made in them. Records which included the baptisms of a few Atcherley children! “Always check the original”, or the closest thing to it, rather than relying on indexes and abstracts. In the case of those Atcherley baptisms – done! (I also had a look at some Bishops Transcripts for Waters Upton, and discovered that there are records there which I could transcribe at my local Family History Centre, and put online via my Waters Upton One Place Study website.) 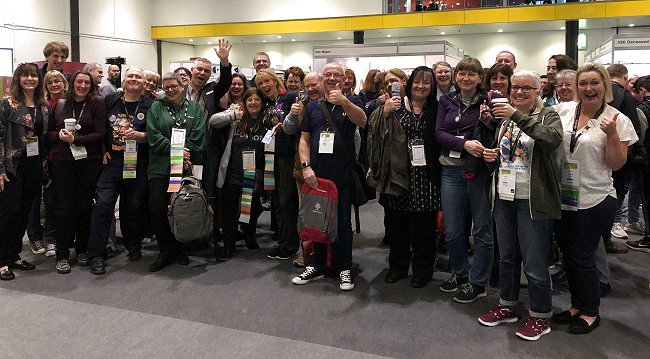 An undoubted highlight of the third and final day of RootsTech London was the third and final – and easily the biggest – Ancestry Hour meet-up. Ancestry Hour is a Twitter chat which takes place on Tuesday evenings from 7pm UK time, using the hashtag #AncestryHour. I am one of many who take this opportunity to share family history (and off-topic) news, views, information and banter with other like-minded people, so it was brilliant to be able to meet so many of my fellow Ancestry Hour tweeters in person – many for the first time. ‘Connect’ is one of the RootsTech buzzwords, and the show was certainly a great opportunity to do that on so many levels. 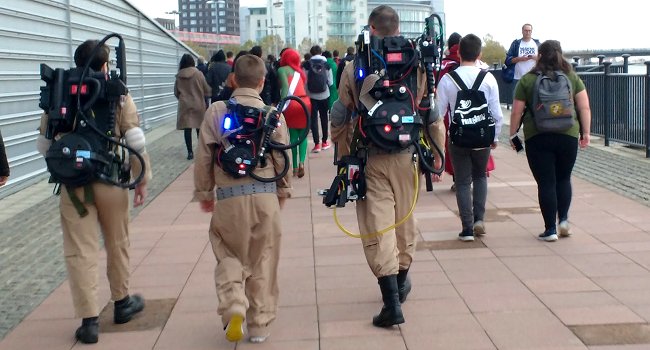 I can’t conclude this article without mentioning the other event taking place at the ExCeL alongside (actually, dwarfing) RootsTech: Comic Con! For me this gave a feeling of déjà vu, as I had previously attended a Guild of One-Name Studies conference which shared a hotel with an anime convention! It was amazing to be in the midst of so many, mostly young people, of all cultures, celebrating their love of comics, video games, TV and films – in many cases by dressing up as their heroes.

Nor can I conclude without giving thanks. To FamilySearch for organising such an amazing event so well. To the small army of volunteers who helped make things run so smoothly. To the ExCeL for providing an excellent venue with wifi that worked (such a contrast to the NEC!). To Fran Kitto (TravelGenee) for her RootsTech pass giveaway, which enabled me to attend for free! To the speakers for sharing their knowledge and expertise with so many. To the organisations large and (especially) small, who attended and made the exhibition hall a great place to visit – special shout-outs to the MOD, Filae.com and FamilySearch for their contributions to my Atcherley research. To so many genie friends who stopped to say Hello or to chat, and especially to Carol, David, John, Sylvia and Tara for their company on Thursday evening.

Final thoughts? What a show! I have little doubt that everyone who went (official figures put the total at nearly 10,000) would love to see RootsTech return to the UK. No pressure, FamilySearch and the RootsTech London organising team, but we want you back!

Picture credits. Ancestry Hour meet up: courtesy of Paul Chiddicks. All other photos: by the author.

For a great collection of links to other RootsTech London articles and blogs, see Randy Seaver’s Genea-Musings.