The name Atcherley, mentioned in connection with flying, usually brings to mind Richard and David Atcherley of the RAF. There was however another bearer of the name who beat the famous flying twins into the air, and into battle, back in the days before the RAF even existed. Though Atcherley was not his surname he was a distant cousin of Richard and David, and his life in the air was, like theirs, not without incident. 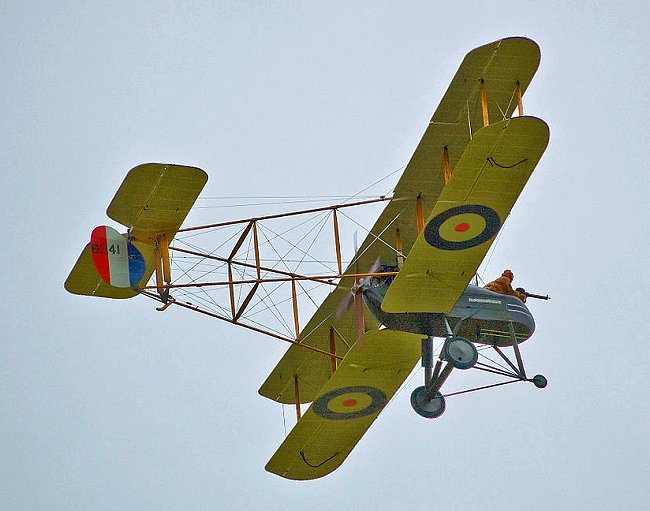 A reconstructed FE2B, like that flown by Roy Atcherley Vosper during World War One.

When Rose Goldup Atcherley was born in 1871 she was given her mother’s maiden surname as a ‘middle name’. 25 years later in 1896 Rose married a man who had received his second forename in the same manner: Harry O’Donoghue Vosper. So we can, at least in part, understand why Rose and Harry’s son was called Roy Atcherley Vosper [

Roy was born on 4 October 1898 at Brighton in Sussex. He was Rose and Harry Vosper’s only child, for within a few months of his birth Rose passed away at the age of 27. Harry married again in 1902, to Norah Eleanor Broomfield. Norah presented the family with a daughter, Kathleen O’Donoghue Vosper, in 1903, by which time the Vospers were living at Ashford in Kent.

Harry Vosper’s job in brewing took him, with his wife and children, back to his home town of Plymouth. The 1911 census shows Harry, Norah, Roy and Kathleen living there at 109 Mount Gold Road. Harry, now a brewer’s manager, could afford to employ a live-in domestic servant.

It seems likely that Harry was then, as he was in September 1916, West of England Manager for Samuel Allsopp & Son Ltd. Within five years of the 1911 census being taken, the Vosper family had moved out of Plymouth to Furze Croft at nearby Elburton. Meanwhile Roy Vosper, now aged almost 18, had completed his education at Plymouth College and was working as a junior clerk for Anglo-American Oil Co Ltd. He had also been training with the Plymouth OTC (Officer Training Corps) for two years. All this information was provided by Roy on Army Form B.2512 – the Short Service Attestation form completed by those enlisting with the Army. The Great War was still raging, and Roy was determined to do his duty.

Initially posted to the Army Reserve as a Private, Roy Atcherley Vosper joined the Inns of Court OTC on 29 December 1916 (rank Private, service number 10263). Roy had set his sights on a higher rank however and on 6 March 1917 he completed form M.T.393A, an application for admission to an Officer Cadet Unit. His preference was to serve with the Infantry, his unit of choice being the Royal Sussex Regiment. The suitability of his “moral character” and education having been certified by the acting Head Master of Plymouth College, and his fitness for military service being confirmed by an army medic, Roy’s form was despatched to the War Office on 12 March 1917.

Quickly accepted by the RFC (the cap badge of which is shown above), Roy was attached to its School of Military Aeronautics at Reading. He was discharged from the Inns of Court OTC “on being appointed to Commission in the General List (RFC)” on 16 May 1917. This appointment was published in the London Gazette just over three weeks later:

Roy was ‘Gazetted’ again on 26 October 1917, with a notice that he had been confirmed in his rank of 2nd Lieutenant in the Royal Flying Corps with effect from 29 September. A little over three months after the successful completion of his probationary period, on 6 January 1918, Roy embarked on a ship along with 23 other officers of the RFC’s 58 Squadron to join Britain’s Expeditionary Force in Europe. More officers from the squadron, including Major J H S Tyssen, left by air to join these men four days later.

On 1 April 1918 the Royal Air Force was formed from the RFC and the Royal Naval Air Service, creating the world’s first independent – and at that time its largest – air force. Roy Atcherley Vosper became a part of this new fighting force, as a full Lieutenant. It was however as a 2nd Lieutenant that Roy was, on the very day the RAF was established, recorded as being involved in an accident in which his fellow officer Lt H C Hyde was injured. His plane, an FE2b, had undershot and struck a ridge on landing after taking part in a bombing raid near Douai.

The life of an RFC/RAF pilot during the Great War was perilous and often short, but Roy somehow survived – even when he was captured by the enemy. By the summer of 1918 he was a Lieutenant with 149 Squadron and was again conducting bombing raids, at night, over occupied France. After carrying out one such raid on 18 July 1918, piloting FE2B serial number D3779 and accompanied by a Lieutenant A Smith, he failed to return to base and was reported as missing.

Lieutenant Roy Atcherley Vosper’s FE2B was one of nearly 140 British aircraft which the Germans claimed as having fallen into their hands on the Western Front during the month of July 1918. The other machines were 14 Sopwith single-seaters, 1 Sopwith two-seater, 40 Sopwith Camels (single-seaters), 9 Sopwith Dolphins (single-seaters), 1 Bristol, 2 Handley-Pages, 1 “large fighter” (Groszkampfflugzeug), 27 S.E.5 single-seaters, 20 D.H.4. two-seaters, 1 D.H.5 single-seater,  5 D.H. 9 two-seaters, 14 B.F. two-seaters and 1 R.E. This list shows something of the variety of aeroplanes the RAF was using as part of the war effort, and also gives an indication of their vulnerability. The photo below shows an FE2B after its capture by German forces.

At first, Roy’s fate was unknown. The Roll of Honour published on 12 August 1918 included him among the men listed as missing. The first of two casualty cards created by the RAF in connection with Roy’s disappearance included the words “No news” in the Remarks column, and underneath, in pencil, was written “Is he alive”. He was. A further Roll of Honour published on 21 September 1918 included Vosper, Lieut. R. A. in the list of those who were “Previously Missing, now reported Prisoners.”

Roy’s capture by German forces had been publicised by them in their French-language ‘newspaper’ Gazette des Ardennes on 26 July. This showed that he had been brought down unwounded on 19 July 1918. The news was communicated to Roy’s family by the Red Cross on 13 August. I imagine they were very relieved to learn that Roy was alive, but also more than a little concerned that he was in enemy hands.

In October 1918 it emerged that Roy had been captured at south-west Armentieres in France, and that he had been transferred from Karlsruhe to Landshut. This information was taken from a document supplied by the Germans, which showed Roy’s “Off. Gef. Lager” (Gefangenen Lager: prison camp) as Karlsruhe, but with that place crossed through in red and with Landshut written, also in red, above the entry. The POW camp at Landshut, in Bavaria, was a castle: the prisoners were confined within the grooms’ quarters. Whether Roy was present, or took part, when an attempt to dig an escape tunnel was made (only to be discovered by the Germans on 8 September 1918), I do not know.

By the middle of November 1918 Roy had been transferred to another camp, at Kamstigall, near Pillau. Then in East Prussia, Kamstigall now lies within Russia and is known as Baltiysk. Roy and the other British officers held there were repatriated to Leith, in Scotland, aboard the SS Russ. Arriving there on 13 December 1918, Roy was probably sent to a reception camp in Ripon, Yorkshire, before being allowed home.

The Great War was over, but Roy Atcherley Vosper’s career in the Royal Air Force was not. With effect from 12 September 1919 he was granted a short service Commission as a Flying Officer. Another RAF casualty card recorded that Roy received slight injuries on 22 September 1920, while conducting  a radiator test during a reconnaissance flight up to an altitude of 10,000 feet. Roy was then with 31 Squadron in India and flying a Bristol Fighter, registration number F4424. It was recorded that the incident was “Not due to negligence or misconduct” on Roy’s part.

Roy was injured again on 15 October 1921. Still with 31 Squadron, he was again flying a Bristol Fighter (E2334), which he was ferrying “from Cawnpore to Peshawar”. This incident, according to a note written on the casualty card in red ink, was “Recorded under ‘casual flying’”. Roy was promoted one more time, to the rank of Flight Lieutenant, with effect from 1 July 1926, but on 12 September that year he was transferred to the Reserve. He finally relinquished his Commission on completing his service on 12 September 1930, and was permitted to retain his rank.

Although his exploits in the air have been overshadowed by those of his better-known relatives, Richard and David Atcherley, Roy Atcherley Vosper deserves recognition as one of the first officers of the RAF, who risked his life for his country in the skies above the Western Front.