Sometimes it is the records associated with a person’s death that shed the most light on how they lived their life. That is certainly the case with “Samuel Atcherley [

] of Sowbath in the County of Salop Gent” who, being “very sick and weak in Body, but of perfect Mind and Memory” made his last Will and Testament on 7 August 1731.  The will itself does not tell us a great deal – but the “true and perfect Inventory of the Goods Chattells Cattle Household Stuff &ca.” drawn up to accompany it, a room by room listing of all of Samuel’s possessions, provides a wonderfully detailed insight into the life led by this Gentleman farmer in the early 1700s.

Baptised on 2 September 1687 at Shrewsbury St Mary in Shropshire, Samuel was the second son of John Atcherley and his wife Elizabeth Elsmere (see The Atcherley family of Edgerley in Kinnerley – Part 2). He became their eldest surviving son on the death of his older brother, named John after their father (John junior was buried 28 Dec 1706 at High Ercall, aged about 20).

“A True Copy of the Poll for the County of Salop” published in 1714 showed that both Samuel and his father John had their places of abode at “Rhoden” – the township of Roden in the parish of Ercall Magna. Both were entitled to vote because they were freeholders, Samuel possessing land at “Eadiston” (possibly Eardiston in the parish of Ruyton XI Towns, or Edstaston in the parish of Wem) while his father John owned land at “Edgerly” (Edgerley). (Both father and son had voted for the Tory candidates Sir John Astley and John Kynaston Esq – there was no secret ballot back then!)

], the widow of Samuel Roycroft of the Moortown in Ercall Magna (see The mothers of the Moortown Atcherleys). The only son of Samuel and Elizabeth, named John, was baptised at High Ercall on 15 March 1714/5, the parish register recording him as “John Son of Samuel Atcherley of Roden & Elizabeth his wife”. It was probably not long before 1728, or maybe even during that year, that the family relocated to Sowbath on the edge of the parish of Stanton on Hine Heath, close to the neighbouring parishes of Moreton Corbet and Shawbury. On 28 June of that year Elizabeth made her will, describing herself at first as “Elizabeth Acherley of Roden in the Parish of High Ercal”. This error was corrected by crossing out “Roden” and “High Ercal” and interlining the place and parish names of “Sowbatch” and “Staunton”. Elizabeth died the year after making her will and was interred at High Ercall on 5 September 1729. The parish register shows the burial of “Eliz: wife of Samuel Atcherly of Sowbich”.

Elizabeth’s will gives the first indication of some the effects which were present in the Atcherley household. (The executors of the will were Mr John Allen “of ye Moor” – Moortown – and Mr Richard Atcherley “of Sowbach” – see ; Samuel’s sister Mary Atcherley was a witness.) Elizabeth’s son John was bequeathed not only “ye use & Interest of two hundred pounds, until he arrive to ye age of one & twenty years” but also “one feather Bed & Bolster, two Blankets, one Rug & blue hangings, one pair of Bed steads, one joint Chest with two Drawers, one Chest of Drawers, one dozen of joint Chairs, five seven pound Dishes of Pewter, one dozen & half of Plates, Six pair of fine Sheets, a dozen of napkins, three Table Cloths, a pair of Pillow Cases, a side board Table Clothes & one side Table.”

Samuel outlived his wife by less than two years. According to the register of St Mary & All Saints at High Ercall, “Samuel Atcherly of the parish of Staunton was buried the eleventh day of August” in 1731. Based on the date of his baptism he died at the age of 43, possibly 44. In his will he had bequeathed to his “Dutiful Son John Atcherley” all his lands, his messuage or tenements and all his ready money. However Samuel willed that his “Chattells Cattle Corn Grain Hay Utensells and Implements of Husbandry Household Goods &ca.” were to be sold and his debts and funeral expenses paid.

Samuel’s sole executor, his “Dearly Beloved Brother” Roger Atcherley (a tanner in Shrewsbury) wasted no time getting started on putting the terms of the will into effect. The “true and perfect Inventory” of Samuel’s possessions was taken on 18 August 1731, just a week after his funeral. The inventory covered three sheets of paper, two columns on each sheet, with each item or group of items given a value in pounds, shillings and pence and (with the exception of livestock, implements of husbandry and growing crops) listed under the room where found. Those rooms were as follows:

Prepare yourself for a tour of these rooms and their contents, Samuel Atcherley’s home, based on the list set out in the inventory of his possessions – starting with the kitchen. (To save space the items are not set out in the same format as in the inventory, but they follow the same order and all original spellings remain unchanged, including the use of ‘ff’ to represent an upper case F.) 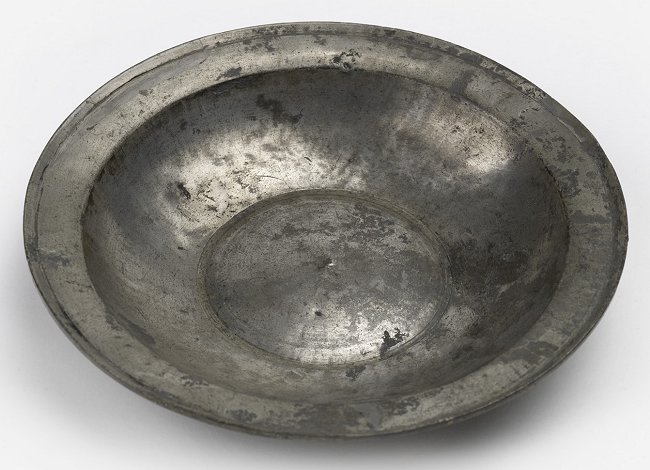 Samuel’s kitchen was not only the first room to have its contents itemised, it also contained more possessions than most of the other rooms in the house put together. Here, there were one or two fires held within iron grates, and one set in a pit within which it was raised on a pit grate to enable air to circulate. There were fenders to catch any ashes or debris falling from the fires, and a fire plate: a solid, upright fire guard. The ‘jack’ was most likely an iron jack or roasting jack, a mechanical device with weights and pulleys which turned the spit on which meat was roasted by the fire. The ‘gollots’ (gullets?) were probably jacks of a different type. The ‘dreeping pan’ (dripping pan) would have been placed beneath the roasting meat to catch the drippings. 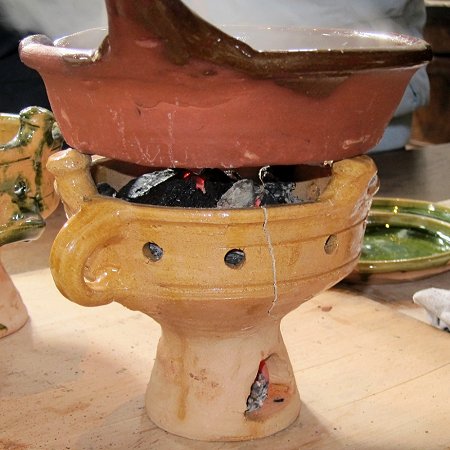 various iron pots and kettles (the latter being open cooking pots with handles, which were suspended over the fire) were also used for preparing food. The ‘chaffing dish’ (chafing dish) may have been used for cooking foods which required a more gentle heat than that from the fire, or for keeping cooked food warm before serving (or both). ‘Tin ware’ is a term which may have covered a variety of objects used in food preparation, or serving, or both. The furnace was probably a vessel used for heating water to be used for washing or as part of the process of brewing.

The presence of two tables, three “ffurms” (forms: long, backless wooden seats), two ‘joyn stools’ (joined stools, made with joints and wooden pegs, not with nails) and at least two chairs suggests that the servants at least ate in the kitchen. Food was served on plates or in pewter dishes, there was also a salver, and ‘pollengers’ – pottingers or porringers, bowls used for soup or porridge (these often had two flat handles). The term ‘Earthen ware’ may have encompassed a range of vessels in which food or drink was served. A range of knives, forks and spoons were available for use in the preparation and the eating of meals. With so many utensils in the kitchen there was a need for places to keep them, a need met by the pot racks, dishboard, cupboards and dresser. 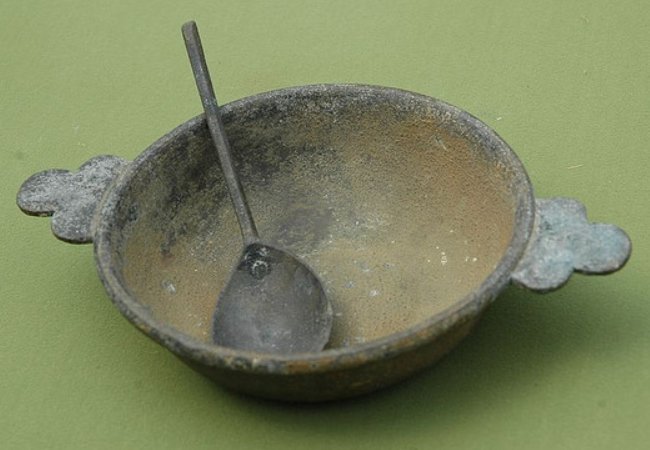 Also found in the kitchen was a warming pan, into which hot coals from the fire would have been placed so that it could be used to warm Samuel’s bed before he retired for the night. Finally, the kitchen seems to have been the only room in the house where there was a clock. An opportune time, I think, to wind up the first part of this story.