On Saturday, 26 April 2014, Findmypast (in conjunction with Shropshire Archives) officially launched their Shropshire parish register collections – baptisms, banns, marriages and burials spanning 1538 to 1900. Most of the records had actually gone online just over a week before, and I found them, quite by chance, on the morning of Good Friday. Since then, as you can imagine given that the Atcherley family has its origins in Shropshire, I have been busily searching the records. 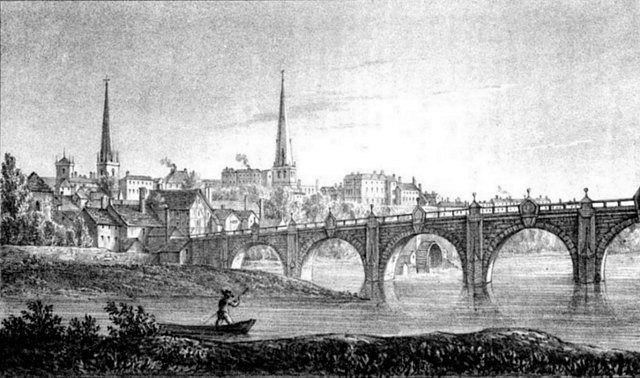 Shrewsbury, from the Shropshire Gazetteer of 1824. The records of its churches are now online.

Because of some poorly written register entries (and also, it has to be said, some dodgy transcribing), the name Atcherley turns up in a weird and wonderful variety of forms in the new records, besides the standard variants of Atcherly and Acherley. The alternate spellings include Atchaley, Atcherby, Alcherley, Acharty, Asherley, and even Athehenley and Mcherley! I have also found register entries under two other names which are surnames in their own right, Atherley and Ackerley, which were in fact for Atcherley family members.

The great thing is that with Findmypast‘s new search system, which so many have complained about since its recent introduction, I have found it quite easy to track down all these variants – I really don’t think I would have been able to find them all under the old system. Certainly, I wouldn’t have found them so quickly. (With regard to the much-criticised changes, I did avoid the Findmypast website for a couple of weeks or so after they were introduced and so I did not experience their early incarnations. I know that the Findmypast team was quick to acknowledge that they hadn’t got things right and also quick to set about changing things. Lots of tweaks and improvements were made as a result and those who are willing to try can now reap the benefits.)

The upshot? I have tracked down around 250 baptisms, some 200 burials and around 100 marriages, for my Atcherley kin in Shropshire. (Which shows how small a family the Atcherley clan is, given that these are all the records I could find in their county of origin over a period of some 350 years!) The vast majority of the register entries are ones I already knew about from published transcriptions and/or from many hours poring over microfiche readers, hand-written transcripts and even an original register or three, at Shropshire Archives. But there are some records which are completely new to me, including a marriage which resolves a long outstanding “who was Elizabeth?” query, and some baptisms showing at least one Atcherley family in a place I wasn’t expecting to find them! Some of the records confirmed information in the early 19th century pedigree notes of the Rev John Newling, copies of which were obtained for me by Martin James of Family Heritage Search back in March (and about which I will have more to say in due course). Now I have to work through my online and offline Atcherley trees to incorporate the new information!

Even though there is not a huge amount which is new to me in the online registers, it is just brilliant to be able to look at the wonderful, true-to-life colour images of register pages going back to the mid 1500s – it’s pretty much like looking at the real thing. (And given the condition of the real thing – some of the older registers are falling apart – it is good to know that there should now be almost no need for anyone to handle the originals.) A personal highlight for me was finding two signatures dating back to 1662, written on a page of the Baschurch register by my own 9x great grandfather John Atcherley in his capacity as Church Warden. His baptism was recorded in the same volume, back in 1613.

There were a few issues with the record collection which Findmypast was impressively quick to resolve after I highlighted them via Twitter, and there appear to be a few gaps in the online coverage of the archival holdings – some pages missing from registers, and possibly some registers missing. Findmypast is, to their credit, keen repair any such omissions as soon as possible.

Overall, the online registers are a magnificent resource which will be of immense value to people like myself researching Shropshire roots. Well done to Shropshire Archives for arranging the top quality digitisation of their parish register collection. Thanks to the clarity of the images I have been able to confirm quite a few names (particularly marriage witnesses) which were illegible to me when checking copies on microfiche. Well done also to Findmypast for putting these digitised registers online, indexed and with a search system that enables us to find the people within them. (Now we need the reinstatement of the transcription error reporting facility, as lots of names – and even dates – need correcting!)

There are more parish registers which are to join those from Shropshire online at Findmypast in (I hope) the not-too-distant future, including those of Staffordshire (which should also feature quite a few Atcherleys). Hopefully others will come along too, and there are other collections at Shropshire Archives (such as their Quarter Sessions records) which it would be great to see online – particularly if the digitisation is of the same quality as for the Shropshire parish registers.

So, at the risk of sounding like Oliver Twist, please can we have some more?!?

Update, 21 Sep 2014: Since I wrote the above article, Findmypast has reinstated its transcription error reporting facility. It has also launched the first batch of the Staffordshire parish registers.