One of the pleasures of conducting the one-name study of an uncommon surname like Atcherley, is being able to spend time researching the families of the people to whom the Atcherleys were married. This often yields useful genealogical information. It can also provide interesting insights into the ways in which the lives of people in the main Atcherley family tree were influenced by their non-Atcherley relatives. Such is the case with Ann Compton Atcherley née du Moulin [

], wife of Rowland Atcherley M.D. As her maiden surname might suggest, although she was born in England to parents who were also English by birth, Ann’s ancestry was partly French. It was also strongly Catholic. So before I look at the life of Ann Compton Atcherley, I will delve into the du Moulin family of which she was a part.

Tracing Ann’s paternal ancestry has taken me back to her grandfather, John Oliver du Moulin (or maybe, originally, Jean Olivier du Moulin?). John was said to be “of Brittany, France, and of Moorfields, London” but I have so far failed to find any record showing where or when he was born. My guess would be France, in the 1730s or ‘40s. Wherever he started his journey in life, John was living in London by 1772: on 19 May that year “Oliver John Dumoulin of the Parish of St Mary Woolchurch London a Batchelor” married Mary Browne of Easebourne, Sussex, in the parish church of Easebourne St Margaret (pictured right).

John Oliver du Moulin was a merchant, a prestigious one too it would seem given the status of the family he married into. His wife Mary was a daughter of the late Mark Browne, Esquire, of Easebourne, Lord of Methley in Fillongley, Warwickshire, by Mark’s second wife Anastasia, who was the daughter of Sir Richard Moore, Bart., of Fawley, Berkshire.

Mark Browne himself was a descendant of Sir Anthony Browne, a ‘Romanist’ or Catholic by religion who was made Viscount Montagu by Queen Mary in 1554. Although Mark did not inherit the title his son, Mark Anthony Browne, became the ninth Viscount Montague on the death of his cousin George Samuel Browne in 1769. Another high-profile connection came about in 1780, when the Browne’s eldest daughter, named Anastasia after her mother, became Lady Mannock through her marriage to Sir Thomas Mannock, Bart., of Gifford’s Hall in Suffolk.

The religious beliefs of the first Viscount Montagu were passed down with the Browne surname to his descendants in 18th century Sussex and beyond. The Catholic Who’s Who and Yearbook of 1917 stated, with regard to the Brownes: “The family of Easebourne […] has always kept the faith.” 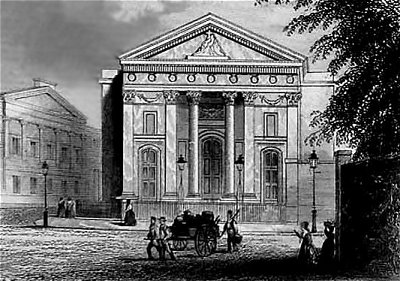 It is therefore perhaps not too surprising (particularly given his French roots) that John Oliver du Moulin was a Catholic too. Two Roman Catholic registers, those of the Sardinian Chapel (St Anselm & St Cecilia), at Lincoln’s Inn Fields, Westminster, and St Mary Moorfields, Middlesex (pictured left), record the birth and baptism of John’s son “Andreas Joseph Aloysius Du Moulin” in 1774. The broadly identical entries in these registers, written in Latin, indicate that Andrew Joseph Aloysius du Moulin was born on 11 May, and baptised at home two days later because it was feared that he might die at any moment.

The sickly infant Andrew du Moulin survived, as did his two siblings – an older brother, James Joseph, and a younger sister, Barbara Mathilda. James Joseph du Moulin was born on 30 April 1773, and died unmarried at Baltimore in the USA on 8 August 1821. Barbara Mathilda du Moulin, born on 26 December 1776, married Jean Pierre Louis Francois César de Fages, Baron de Fages Vaumale, France, on 8 August 1805 and died ‘without issue’ on 25 November 1858. Sadly, Oliver John du Moulin died in 1780 (he was buried on 19 November at Clapham Holy Trinity) and his Mary passed away on 26 April 1784 (she was interred at Abergavenny, Monmouthshire). I wonder who then took care of the three du Moulin orphans?

When the French Revolutionary Wars of the 1790s brought Britain and France into conflict once more, it was to the aid of his country of birth that Andrew du Moulin sprang. On 20 August 1796, at the age of 22, “Andre Du Moulin, Gent” became an Ensign in the 43rd (Monmouthshire) Regiment of Foot (taking the place of Ensign O’Bryen who was superseded for being being absent without leave). The 43rd certainly needed Andrew and many more like him.

Although the wars between revolutionary France and various European monarchies (including Britain and Austria) were initially confined to Europe, the conflict gradually expanded to other parts of the world. In the case of Britain and France, it was not just one country fighting another: two sprawling empires were at war and colonial possessions were fair game in the struggle for supremacy. So it was that in 1794 the 43rd Regiment of Foot, which had been sent to the West Indies, captured the French islands of Martinique and Saint Lucia. The regiment did not fare so well at Guadeloupe however, were it was defeated – and decimated – by a much larger French force.

The scale of the devastation which had been wrought by the French against the 43rd Regiment was made plain in this report on the unit in the Ipswich Journal of 8 October 1796 (just a few weeks after Andrew du Moulin had joined up):

On Tuesday last marched through Southampton, on their route to Eling barracks, Southampton Bay, the 43d regiment of foot, composed almost entirely of recruits; for it is worthy of remark that, of near 900 men, who went out in the West Indies, only 5 officers, the drum-major, and half a dozen privates, are now alive; the rest having fallen a sacrifice either to the climate or the sword, except between 40 and 50 men, who were captured by the enemy.

In an “Extract of a letter from Newhaven, Jan. 30”, printed in the Hampshire Chronicle of 4 February 1797, it was stated: “The 43d regt. of foot came into this town from Hilsea Barracks, and have embarked for Cowes, from which place, it is said, they are shortly to sail for Lisbon.” The regiment did set sail for foreign parts not long after this observation was made, taking with it the newly-promoted Lieutenant Andrew du Moulin. Lisbon was not its destination however. In Historical Records of the Forty-third Regiment, Monmouthshire Light Infantry, published in 1868, it is written:

1797. In February a draft of 600 was received by the 43rd from the 16th Regiment. These men had been raised for foreign service by parishes in and about London. On the 15th of March, the 43rd, upwards of 1000 strong, under command of Colonel Drummond, again sailed for the West Indies, disembarking and occupying Fort George in Martinique on April 23rd. In September they were relieved by the 14th Regiment from Barbadoes, and removed to Fort Edward, where they remained until the end of the year.

On 1 January 1788, the regiment was sent to St Piere, on the north-west coast of Martinique. Remaining there for the next two years, they “suffered terribly from the pestiferous atmosphere.” It appears that Andrew du Moulin was lucky to survive this part of his service: by 6 February 1800 “the entire strength of the regiment had dwindled below 300.” On that date, “removal to the town of Fort George, headquarters of the West Indies, took place.” After an order “that the men might volunteer for the different corps in the West Indies preparatory to being sent home”, 164 officers and men of the regiment “embarked from Port Royal on board H.M. ship ‘Prince of Wales,’ landing at Portsmouth late in June.” Among the returning officers was Lieutenant Andrew du Moulin.

From Portsmouth the 43rd Regiment moved to Stroud, and from there, in October 1800, they went to  Tilbury. Then, on New Year’s Day 1801, they headed for Portsmouth. The Isle of Wight was their next destination. They disembarked at Cowes on 17 January, and marched to their quarters at Newport. After “a few days’ sojourn” the regiment “embarked for Guernsey, where the regiment remained three years, during which recruits came in from the English and Scotch Fencibles and the Irish Militia.”

Andrew du Moulin did not stay with his regiment for the whole of the three years during which it was stationed on the island of Guernsey. On 24 June 1801, at St Joseph’s Catholic Chapel in Bristol, “Andrew Du Moulin, Esq. of the 43d regiment” married London-born Eliza Dyer of St James Barton in Bristol, daughter and heir of George Dyer of that city. I presume that afterwards Andrew returned to Guernsey. If he did, he would remain there for about a year before his service came to an end following the ratification of The Peace of Amiens. Andrew retired on half pay on 23 July 1802 and then, for reasons I which I have yet to fathom, ‘exchanged’ with “Lieutenant Francis Glass, from the half-pay of the 9th foot”.

The Peace of Amiens was short-lived, so during the first decade of the 1800s Andrew du Moulin found himself signing up for further military service – this time with county Militias. The information I have regarding this service is sadly rather sparse: he was commissioned as a First Lieutenant in the Royal Carmarthenshire Fusilier Regiment of Militia on 7 August 1804, and he is known to have been a Captain in the First Somerset Regiment of Militia in 1810. Either of these posts may well have involved Andrew being stationed on the south coast of England, where the men serving under him would have carried out garrison duty and taken their turn guarding French prisoners.

Militia duties did not prevent Andrew and Eliza du Moulin from starting a family. The couple had six children, all baptised at St Joseph’s Roman Catholic Chapel in Bristol, and born from 1806 through to 1817 as follows:

As you can see, the du Moulin home from 1806 (if not before) was at Bristol, but by the beginning of 1817 the family had moved to Bath. When Anastasia du Moulin married in 1829, the Warwick and Warwickshire Advertiser noted that she was the “eldest daughter of Andrew Du Moulin, Esq., of Brock Hall, in this county”. Brock Hall (pictured below) was situated in the parish of Fillongley – which suggests that Andrew du Moulin then possessed the Methley estate which had belonged to the Browne family.

By 1841, the core of the du Moulin family was residing at ‘Park’ (probably Park Place), Mount Radford, in the parish of Exeter St Leonard, Devon. Andrew’s occupation appears to read “H P officer” (presumably meaning an army officer on half pay). Oddly, the enumerator recorded Andrew’s age as 52 and (even more bizarrely) his wife Eliza’s as 35. More accurate were the ages written down for Nicholas (31), and Ann (26). The family had one male servant and two female servants living with them.

Within five years the du Moulins had relocated again, to Bathwick, where they lived at Sydney Place. This was the address given by Ann Compton du Moulin, when she married Rowland Atcherley at Bathwick St Mary the Virgin. Ann, with her Anglo-French roots and Catholic upbringing, had married into a family which was both English and Anglican.