The edifice is a plain handsome brick building, well adapted to the purposes of the institution, being situated on the verge of an eminence, which commands every advantage of salubrious air, and, what is, perhaps, in no small degree favourable to convalescents, delightful prospects. Its internal economy, and the gratuitous attendance of its medical supporters, enable it to challenge a comparison with any provincial establishment of the same kind. — Joseph Nightingale (1813), A topographical and historical description of the County of Salop. 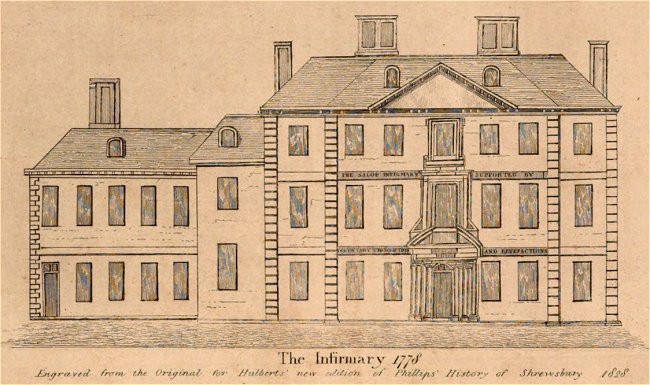 Engraving of the Salop Infirmary, 1778.

The Salop Infirmary described by Joseph Nightingale in 1813 was a rather larger establishment than that which had opened back on 25 April 1747 (on which day four in-patients were admitted, and one out-patient). Returning to Henry Bevan’s Records of the Salop Infirmary (published 1847):

The Infirmary was, at the commencement, calculated to accommodate fifty-two In-patients, twenty-six of each sex; but in order to reduce the debt which was contracted in fitting-up and furnishing the House, it was thought advisable to limit the number in the first year to forty, and in the second to forty-six. It was soon however discovered that even the provision for fifty-two In-patients was by no means sufficient for the wants of the neighbourhood—the wards during the summer months, and in the healthiest and busiest season of the year, were constantly full—and many Patients were at the same time on the books waiting for room. It was therefore found necessary, in 1749, to fit up a new ward, by which the accommodation for Patients was increased to sixty beds.

Of course, even 60 beds were not enough to meet demand – especially as demand increased as news of the infirmary’s work spread. In 1751, “Trustees were again obliged to extend the accommodation of the House, so as to admit sixty-eight, or upon pressing occasions upwards of seventy In-patients, and even this was soon found to be too little”. Additional wards were added to the western side of the building in 1788, at a cost of £1,458 6s. 6d. – nearly £1,200 of which was contributed by supporters of the charity within 12 months.

This mismatch between the supply of, and demand for, hospital beds invites the question of how decisions were made regarding those who were to be admitted the infirmary as in-patients. As we have seen, the original proposal upon which the movement to open the institution was founded was for “an Infirmary for the Poor-Sick and Lame” of Shropshire and its neighbourhood. Accordingly, rule 46 of the Rules and Orders for the Government of the Salop Infirmary (published in 1746) specified “That no Patients be admitted who are able to subsist themselves, and pay for Medicines.”

There were other restrictions too, mainly aimed at excluding high-risk patients or those who would not benefit from treatment. With some explanatory notes from myself in square brackets, here’s rule 58, which stated:

That no Woman big with Child, no Child under seven Years of Age (except in extraordinary Cases, such as Fractures, Stone [in the bladder], or where Couching [displacing of a cataract], Trepanning [boring a hole in the cranium] or Amputation are necessary), no Persons disordered in their Senses, suspected to have the Small Pox, or other infectious Distemper, having habitual Ulcers, Cancers not admitting of Operation, Consumptions [tuberculosis] or Dropsies [oedemas] in their last Stages, Persons in a dying Condition, or judged incurable, be admitted as In-Patients, or if inadvertently admitted, be suffered to continue.

Subject to these and other provisos, patients were to be admitted and discharged between the hours of 11am and 12 noon on Saturdays by the weekly Board of the Infirmary. Perhaps the most important of those other provisos was set out in rule 47: “That no Person be admitted a Patient, but by Recommendation of a Subscriber or Benefactor, unless in Cases which admit of no Delay […]”. In other words, with the exception of emergencies, the selection of those put forward for admission to the Salop Infirmary was down to the individuals and organisations funding the institution.

For every Guinea subscribed, or every ten Guineas given as a one-off benefaction, a donor had the right to recommend one in-patient (and any number of out-patients) each year (provided, in the case of a subscriber, that their subscription was not in arrears). A benefaction of less than ten Guineas allowed the donor to recommend one in-patient for every two Guineas given, during the year following their donation (plus out-patient recommendations). This must have been a big incentive to contributors, but it also meant that admissions were not governed by medical need alone. If you were poor, and in need of hospital treatment, you had to know – or better still work for – the right people. In time, ‘the right people’ came to include the clergymen who visited the infirmary at the institution’s behest.

As we have seen, one of the infirmary’s visiting clergymen was the Rev James Atcherley. Another was James’s nephew, the Rev James Matthews (who I suspect was named after his uncle). The younger James was the son of Anne Atcherley and her husband George Matthews.

I have found very little in the way of records which I can pin to George Matthews with any certainty beyond those relating to his marriage to Anne, at Shrewsbury St Chad on 21 February 1757. In St Chad’s marriage register it was written that “George Matthews of the Parish of Cardiston and Anne Atcherley of this Parish were Married in this Church by Licence”. The marriage bond which George entered into in order to obtain the licence for his wedding to Anne confirmed his place of residence as “Cardistone” (Cardeston, in Shropshire) and described him as a Yeoman.

The draft settlement drawn up prior to the marriage of “George Mathews” and “Jane Atcherley” (sic) held by Shropshire Archives might shed more light on George, but the document is fragile and “not to be produced”. I think it very likely that George was the “Mr George Matthews of Cardeston” to whom John Davies, “a por child of Cardeston”, was indentured as an apprentice on 28 May 1757 “until his full age of 24 years, to learn husbandry.”

Anne Atcherley was the third daughter and fifth child of Roger Atcherley, a tanner of Frankwell in Shrewsbury, and his wife Ann, née Thomas. As one of Roger’s two eldest unmarried daughters at the time, she was (along with her sister Sarah) made joint executrix of her father’s will in 1755 (see Roger Atcherley and his one shilling legacies). Baptised at Shrewsbury St Chad on 3 January 1732/3, Anne would have been 24 years old when she married George Matthews in 1757. She was, I suspect, the Mrs Ann Matthews, aged 68, who was buried at the church of her baptism on 22 October 1802 (George having presumably predeceased her – I have not found a record of his burial). 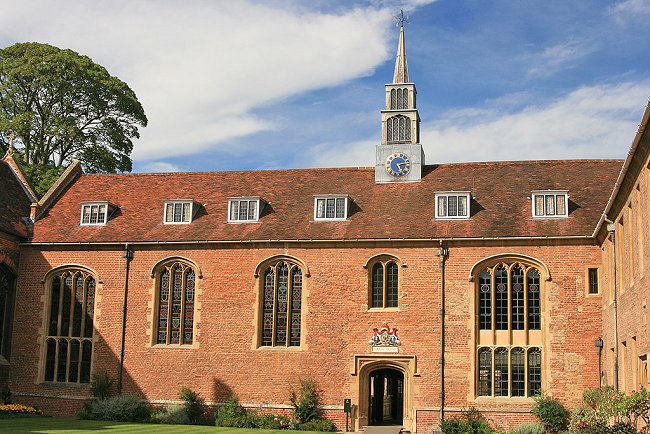 James Matthews was, as far as I can tell, the only child of George and Anne. He was baptised at Cardeston on 9 July 1758. When he was admitted to Magdalene College, Cambridge, on 2 April 1776 at the age of 18, it was recorded that he was the son of George of “Watlesborow, Salop” (Wattlesborough in the parish of Cardeston) and that he had been educated at Shrewsbury School. He was awarded the degree of BA in 1780 (in which year he was ordained as deacon, and appointed to the curacy of Boxted in Essex on 21 September), and received his MA in 1784.

It was not only by his ordination into the clergy that James Matthews followed in the footsteps of his uncle James Atcherley – he was also admitted as Third Master of Shrewsbury School, in 1783, by which time the Rev Atcherley was Head Master there. Both Jameses continued in post until 30 June 1798, on which date they (and the Second Master) were ‘pensioned off’ following a change to the school’s constitution which brought in new masters.

Hopping back to 1784, when James Matthews received his MA, we find him emulating his uncle in another way, as that was the year in which he became a visiting clergyman at the Salop Infirmary. This was in accordance with rule 24 of the infirmary’s original Rules and Orders which stated: “That the Clergy of Shrewsbury be desired, by weekly Rotation, to visit the Sick, to read Prayers twice in a Week, to administer the Communion at proper Times, and to bury the Dead.” A second edition of the Rules and Orders, with some amendments, was printed in 1757 and a third, “the whole having been revised by a Committee”, was published as The Statutes of the Salop Infirmary in 1792.

Visiting clergymen were by this time no longer requested to bury the dead, but they were asked to read prayers every day during their week of attendance and were given a week’s notice of when this would be. Additionally, in consideration of their unpaid service, visiting clergymen were given the privilege of recommending patients for admission as if they were subscribers of one Guinea (that is, one in-patient per year plus out-patients). Over a period of 49 years, from 1784 through to 1833, James Matthews acted as visiting clergyman at the Salop Infirmary no less than 145 times.

James’ concerns for the poor extended beyond his visits to the Salop Infirmary. In 1800, in response to the scarcity and high prices of food then afflicting the country, “the Rev. James Matthews, M. A. Curate of Ford, Salop” published a pamphlet entitled Thoughts on Scarcity, and Remedies suggested. It was one of many such publications in which various authors put forward suggestions based on their own views as to the causes of the problem. James blamed the consolidation of small farms and opined that “it is from Parliament alone we can hope for redress; and although it cannot ‘command the stones to be made bread,’ it is omnipotent enough to enact such regulations as will, under Divine Providence, prevent the return of similar visitations.” 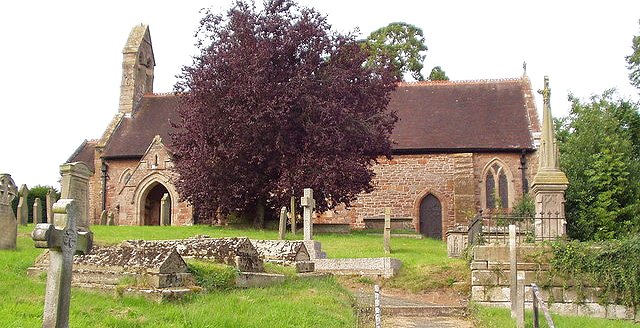 At the time of writing the above pamphlet, James Matthews had been Curate of the Shropshire parish of Ford for about 5 years; he held that position from 1795 until 1802. He also officiated at Astley, signing the register there in 1795, 1810, 1812. He was appointed Curate of that parish in 1814 (in which year he also became Stipendiary Curate of Hadnall), and then Perpetual Curate in 1816, a role he eventually resigned from in 1826. Astley was also where James was buried, on 24 June 1835, following his death “at an advanced age” (he was 76) on the 20th of that month, which was “greatly regretted by his family”. His passing generated one last contribution from James Matthews to the Salop Infirmary – a bequest of £50.

See also references 7 and 8 for Part 1 of this story.