“THE unhappy Condition of many People, who labour under the double Distress of Sickness and Want, hath occasion’d an ENQUIRY, Whether some Publick Provision may not be made for their Relief, in Imitation of the HOSPITALS and INFIRMARIES in LONDON and WESTMINSTER.” So began a printed address – A Proposal for Erecting an Infirmary for the Poor-Sick and Lame of this County and Neighbourhood – which was circulated in and around the county of Shropshire in 1737. The proposal did not immediately gain the support it needed for the idea to be turned into reality, but a decade later the Salop Infirmary came into being. In the years that followed, various members, descendants and associates of the Atcherley family would come to be associated with this charitable institution in a variety of ways. 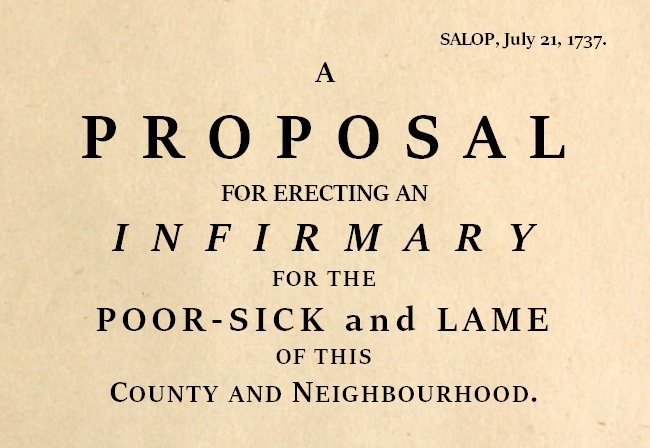 Facsimile of the Proposal issued in 1737.

The Proposal of 1737 continued:

THE Ordinary Poor, in every Place, are competently provided for by the ordinary Parochial Charities; but the occasional Objects of Charity, such as are disabled from Work by Sickness, broken Limbs, or the like, are by no Means well supplied with the Helps and Assistances that are wanted in their Condition; they are, for the most Part, left to languish without Attendance or Advice, in the Hands of ignorant People, and often in such Lodgings as contribute to the Increase of their Distempers; And the little Money that is in such Cases to be expected from Parish Officers, is seldom sufficient to provide them with proper Diet, much less to pay for their Medicines, Attendance, &c.

In Shropshire Doctors & Quacks (2001), GP and medical historian Richard Moore noted that the “ignorant People” referred to in the above address were “the local healers who offered useless remedies and the quacks and charlatans who promised much and delivered little” (more on them later). As for the objects of the proposed charity, they were not all of those who were poor. The “Ordinary Poor” were “competently provided for” – this appeal for philanthropic giving was for the ‘deserving’ or ‘industrious’ poor, who were “disabled from Work” but might return to their employment and support themselves if given the right assistance. Thus to some degree the self-interest of employers, and of contributors to the parish poor rates, was also appealed to.

Infirmaries or hospitals run on voluntary principles were a recent development at the time when the public-spirited folk of Shropshire first set forth their plans. The first institutions of the kind were, as we have seen above, established in Westminster (in 1720) and London (Guy’s in 1726, St George’s in 1733). The first provincial voluntary hospital in England, the Winchester Infirmary, followed in 1736. Shropshire’s false start in 1737 meant that those who hoped the county would host the second such institution were to be disappointed. In 1737 itself, Bristol Infirmary was opened, and that city’s example was followed in 1740 by York, in 1741 by Exeter, and in 1744 by Northampton. This did of course mean that Shropshire had more infirmaries from which to draw inspiration, and Richard Moore has suggested that links between Northampton’s Dr Philip Dorridge and Shrewsbury’s Rev Job Orton may have led to renewed efforts in 1744 to secure backing for the Proposal of 1737.

The first volume of A History of Shrewsbury (published 1825, and referencing the Jacobite rising or rebellion of 1745) stated that: “A general meeting of the contributors took place at the summer assizes of 1745, when the laws by which the institution should be conducted were agreed upon; and notwithstanding the distracted state of the country in that memorable year, the work proceeded so vigorously, that the house was actually opened in the spring of 1747 […]”.

The “laws by which the institution should be conducted” were published in 1746, as Rules and Orders for the Government of the Salop Infirmary. The decision to use and modify an existing building rather than constructing one from scratch enabled the ‘vigorous’ manner in which work proceeded on the infirmary itself and its speedy opening. 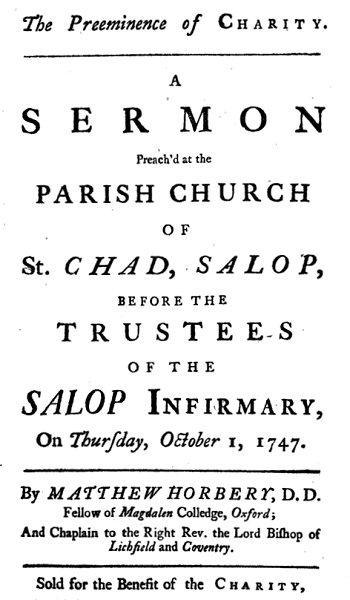 A house named Broom Hall, situated close to St Mary’s church in Shrewsbury, had been chosen as the infirmary’s home. In Records of the Salop Infirmary, published to mark the institution’s centenary in 1847, Henry Bevan stated that “This structure was both spacious and handsome, and in point of situation possessed peculiar advantages. It had been built by the late Corbet Kynaston, Esq., and was designed for the mansion of a gentleman of fortune, but it had never been tenanted, and was in fact in an unfinished state.” Then, “On Saturday, the 25th of April, 1747, every arrangement having been made which was considered necessary, the Infirmary was, for the first time, opened; a General Meeting having been called on the occasion.” The General Meeting was followed by the delivery of a sermon at the church of Shrewsbury St Chad’s (the front page of which is shown above), a practice which became a tradition over the ensuing years.

Apart from the attendance of the Rev James Atcherley as a visiting clergyman from 1756 to 1791 (noted in The Rev James Atcherley, Head Master of Shrewsbury – Part 1) I have found no evidence of any Atcherley associations with the Salop Infirmary in the first few decades of its existence. The next connection that I know of is an indirect one – Francis Lomax Esquire, a surgeon who gave his services at the infirmary, was the second husband of Elizabeth Atcherley, née Crump, widow of Robert Atcherley of Marton.

“Lomax Francis S. of Francis Born Aug 24” was baptised at St Chad’s in Shrewsbury on 2 September 1737. On 20 September 1773 Francis, “of the town of Shrewsbury Surgeon” entered into a marriage bond in the sum of £500 prior to his wedding to “Elizabeth Atcherley of the Parish of St. Chad Wid.” – which took place the same day in that parish.

Francis acted as a surgeon at the Salop Infirmary from 1 November 1768 until 9 October 1781, alongside William Cooper Esquire and Samuel Sandford Esquire who had both taken on this role in 1766 (replacing the three surgeons who had served since the infirmary opened in 1747). The post of surgeon was a voluntary one – only the house surgeon (who lived on the premises) was on the payroll of the infirmary – so Francis and the other surgeons gave their services for free, on top of the paid work they did for private patients.

Although I have found no records of the work Francis Lomax carried out for the Salop Infirmary, he did get a mention in this unusual notice published in the Shrewsbury Chronicle of 28 January 1775:

A caution. A stout, lusty, middle-aged Woman, fresh Colour’d, rather decently Cloathed, but without Stays, has a Wound or the appearance of one in her Right Breast, which she always shews to move Compassion, throws her Body into violent agitations, pretends to have a Wolf in her Belly, says she lives upon raw Meat to feed the said Wolf, and that she was a Patient in the Salop Infirmary under the care of Mr. Lomax, who tried to get the Wolf from her alive, but without Effect. All Persons are desired to take Notice that this Woman is a most impudent Impostor, and has got a great deal of Money from many credulous People.—Whoever will Apprehend her and take her before a Justice of the Peace (which any Person may do without a Warrant) is intitled to a Reward of ten Shillings.

Were folk really that gullible back then? Yes, some were, as is demonstrated by this rather sad episode in which the services of the Salop Infirmary in 1785 (a little after the time of Francis Lomax) were called upon:

The ill effect of those arts practised by the strollers, called Gipsies, has long been known to the community; but, perhaps, no instance has occurred so lamentable as one manifested at Salop Infirmary on Friday se’nnight [= seven-night, or week].—Thomas Barnes, of the parish of Wellington, a farmer’s servant, aged 17, having met with two of these female vagrants, in December last, at Pickstock, near Newport, was told by them, that if he would cut off his own left hand, it would render him more happy, and he would live much better in future. This the credulous and unhappy young fellow actually performed on the 15th inst. with a broom-hook, in the joint of the wrist, but in such a manner as rendered it necessary to amputate the arm in a more eligible part. He is in a fair way of recovery. 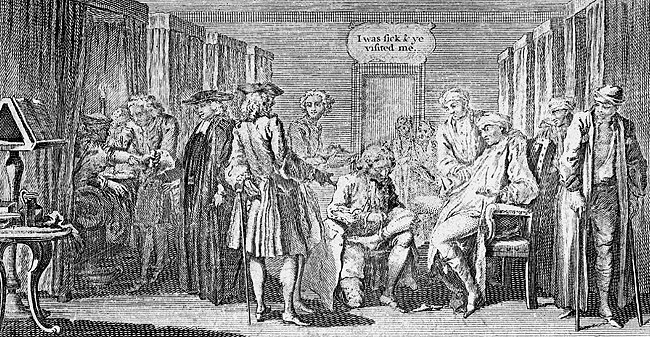 View of a ward at Northampton County Infirmary, 1744 – a similar sight might have been had at the Salop Infirmary in its early years.

In 1780 Francis Lomax was made a Burgess of Shrewsbury (see The Rev James Atcherley, Head Master of Shrewsbury – Part 1 for a little more information on what this involved). Not knowing the precise date on which this event happened, I cannot be certain whether or not Francis’s wife Elizabeth lived long enough to witness it. Elizabeth was buried on 19 June 1780 at Shrewsbury St Chad’s, her parish register burial record and her gravestone both recording her age as 56.

Within two weeks of his wife’s passing, on 30 June 1780 to be precise, Francis made his will. This document shows that he was a wealthy man, owning or holding property in Uppington, a township in the parish of Alberbury, then situated partly in Montgomeryshire and partly in Shropshire (inherited from his late wife’s father Thomas Crump); Trewern, in the parish of Buttington or Tal-y-bont in Montgomeryshire (a one-third share of a messuage, inherited from his late wife’s mother Winifred Crump); Astley in Shropshire (farmland and premises); and Shrewsbury (houses and associated land in Barker Street and Castle Foregate).

Francis left the property he had received from his late father-in-law to his late wife’s ‘right heirs’ on the part of her father, the property inherited from his mother-in-law to that lady’s heir at law, and the other property in his possession to his brothers George, William, Edward and John, sisters Hester (or Esther) Lomax and Ann Baugh, and several nieces and nephews.

As we have seen, Francis Lomax’s tenure as surgeon to the Salop Infirmary ended on 9 October 1781. Was he ailing at that time? I do not know, but within nine months he had breathed his last. He was buried at St Chad’s on 6 July 1782, at the relatively young age of 44.

Picture credits. Facsimile of the Proposal issued in 1737: by the author. Front page of the sermon preached at St Chad’s on the opening of the Salop Infirmary: Adapted from an image at Google Books, original out of copyright. County Infirmary, Northampton. View of a ward in 1744: Image from the Wellcome Collection, adapted and used under a Creative Commons licence.