The loss of his beloved wife Sarah [

] must have hit Aaron Stark Symes [

] very hard. The couple had been married for nearly four decades and prior to Sarah’s sudden and fatal illness, they had every expectation of spending many more years together. Aaron’s duties as Commander of steam-packets ferrying mail across the Irish Sea had exposed him to danger but he had always returned home safely, and Sarah had always been there waiting for him. Now Aaron was home permanently, but Sarah was gone. His existence as a lonely widower was to be relatively brief however, thanks to Elizabeth Atcherley Holt [ 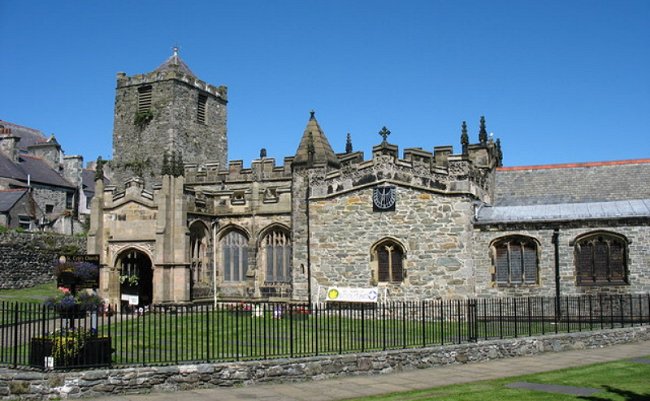 After the funeral Aaron had to face up to life without his wife – and without his seaborne ‘family’, the crew of the St Columba. Aaron and Sarah had made friends in Holyhead, and I am sure that a number of them would have provided the new widower in their midst with whatever support they could. But there was no getting away from the fact that Aaron’s life had changed completely.

In April 1857 Aaron visited Bath, where he stayed at 21 Henrietta Street. Was he attending to matters relating to Sarah’s passing, visiting friends or relatives, or maybe taking a break in different surroundings, to give himself some time and space to think? Carrying out some further research, I found that Aaron and his family had previously been residents of Bath for a while, in between their departure from Guernsey and the renewal of Aaron’s naval career. Death notices in the Bath Chronicle and Weekly Gazette of 6 June 1844 included one for “Deborah Anna, eldest daughter of Lieutenant A. Stark Symes, R.N.” Deborah died “in Sydney Buildings” on the 3rd of that month aged 23.

A search of the same newspaper for ‘Sydney Buildings’ revealed that in July 1844 the Symes household had been burgled. Then, in September 1844, “Ann Jefferys, eldest surviving daughter of A. Stark Symes, Esq., Lieutenant Royal Navy” married Thomas Anstey Mansford Esquire at Old Widcombe Church, otherwise known as St Thomas à Becket Church in Widcombe, which lies immediately south-east of Bath city centre. It appears that Aaron’s daughter Ann and son-in-law Thomas were still living in Bath in 1857 (“Thomas Anstey Mansford, Bath, attorney at law” was listed as an insolvent Debtor in 1858), so it would seem that Aaron went to visit them.

A mystery I have not solved is when, and how, Aaron met his second wife. Elizabeth Atcherley Holt and her sister Arabella moved to Holyhead in or just before 1857. The exact timing is uncertain however, so I do not know whether Aaron and Elizabeth became acquainted before or after Aaron’s bereavement. As for how these two met, my guess is that this was through the church. What seems more certain is that from the seeds of their first introduction, mutual affection developed and blossomed over the Summer of 1857.

Before the wedding of Aaron and Elizabeth took place, a marriage settlement – the ‘pre-nup’ of the time – was drawn up. This was most likely done to protect Elizabeth’s financial interests, for she was a lady of some means, and the potential heiress to a considerable fortune. (When, in time, Elizabeth’s brother William died, it was reported that “His estate at Gorphwysfa and all the residue of his property he leaves upon the trusts of the marriage settlement of his sister, Mrs. Elizabeth Atcherley Symes.”) The witnesses who signed register alongside the happy couple when the marriage ceremony itself took place, at Holyhead on 31 August 1857, were the bride’s siblings, Arabella [

From the records I have found naming Aaron Stark Symes and/or his wife Elizabeth Atcherley Symes after 1857, it appears that the couple settled at Ballybrack, in County Dublin, Ireland. The “Capt. and Mrs. Symes, R.N.” of that place who were included in a list of arrivals at the Lake Hotel, Castlelough, Killarney, in August 1861 were most likely Commander Symes and his wife. The next two people named in that list of arrivals were “Capt. and Miss Holt, Manai [= Menai] Bridge, Anglesey” – Elizabeth’s brother William and sister Arabella.

Thom’s Irish Almanac and Official Directory of Ireland for 1868 placed “Symes, A. S. com. R.N.” (who appeared on another page as “Symes, Commander Aaron Stack, R.N.”) at a more specific address: St Aubyn’s in Ballybrack, Dalkey (St Aubyns is circled in red in the map above). It was at this address that Aaron and Elizabeth remained until 1880, judging by Aaron’s appearances in Slater’s Royal National Commercial Directory of Ireland from 1870. I have also found “Symes, Aaron Hillary [

], St. Aubyn’s, Ballbrack, near Dalkey, chief engineer, R.N.” in listings of people “of whom the Company or Partnership” of the National Provincial Bank of England consisted, published from 1873 up to 1880. This suggests that, when he was not at sea, Aaron’s youngest (and only surviving) son by his first marriage lived with Aaron and Elizabeth during those years. 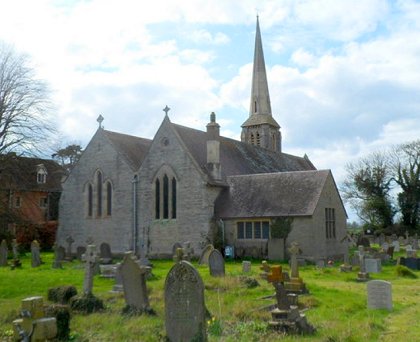 Aaron Stark Symes died of bronchitis at St Aubyn’s, aged 88, on 7 October 1880 – just three weeks after the death of his brother-in-law (and the intended executor of his will) William James Holt, who “dropped down dead on the road near the railway station” at Bangor on 16 September. Both men, the husband and the brother of Elizabeth Atcherley Symes, were buried at the church of St Matthew, Twigworth, Gloucestershire (where their sister and sister-in-law, Arabella Holt, had been interred on 24 April 1869). Their entries in the burial register, dated 21 September and 13 October 1880 respectively, were consecutive (numbers 329 and 330 at the top of page 42).

Following her double bereavement, Elizabeth Atcherley Symes continued to live at St Aubyn’s. With the wealth at her disposal, she made contributions to both church and charity. Some of her donations were relatively modest – I have found “Mrs Symes, Ballybrack” in published lists of donors to the National Eye and Ear Infirmary in Molesworth Street, Dublin (£10 given in 1884); to an appeal on behalf of the inhabitants of the Arran Islands after the failure of their potato crops (£1 given in 1888); and to a subscription for the building of anew church – St Michael’s – at “[the] rising village of Valley, near Holyhead” (£10 given, probably some time before the gift was reported in 1888). The last of those three listings gave the name of “Mr Symes, Ballybrack, co. Dublin”,but there is little doubt in my mind as to the donor’s true identity.

A charity to which Elizabeth made more substantial gifts was the Royal National Lifeboat Institution. The second such gift, of £150, was made in 1882 to supplement a legacy left by her late brother, to fund a new lifeboat at Weston-Super-Mare. Elizabeth’s first donation, which would help to keep the name of her dearly departed husband alive, and which was very appropriate in view of Aaron Stark Symes’ own efforts to rescue seaborne travellers in distress during his time as a packet-boat commander, was an even larger one. 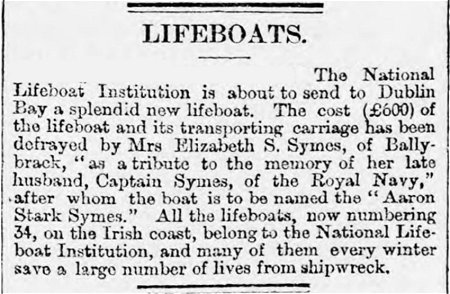 The sum of £600 “munificently” given by Elizabeth Atcherley Symes was widely reported by the press in August 1881, with most if not all running an identical report. Unfortunately, all of these reports named Elizabeth as “Mrs Elizabeth S. Symes” – an error repeated by the RNLI itself in its own account of the launch of the lifeboat which Elizabeth funded:

Poolbeg, Co.Dublin.—It will be remembered that, on the occasion of the gallant service rendered in the Life-boat on this station at the wreck of the schooner Robert Brown, […] the boat was very severely damaged. The opportunity has since been taken of replacing her by a new one of the 34-feet, 10-oared class, furnished with a transporting carriage, the cost of which has been defrayed by Mrs Elizabeth S. Symes, of Ballybrack, Co. Dublin, as an affectionate tribute to the memory of her late husband, Commander A. Stark Symes, R.N., who was for many years during his later life in command of mail packets between England and Dublin, and was before that an able officer in Her Majesty’s service. On the 1st November [1881] the new Life-boat was launched in the Custom-House Dock,Dublin, in the presence of the Lord Mayor and a large and distinguished assembly […]

Immediately after the arrival of the Lord Mayor, Mr A. H. Symes, R.N., son of the deceased commander, formally announced, on behalf of Mrs Symes, the presentation of the boat to the National Life-Boat Institution. […]  The ceremony of naming the Life-boat the Aaron Stark Symes, was then performed by Miss Nicholls, a niece of the donor, and immediately after the bottle of wine had been broken against the stern, the Boat was launched into the dock […] 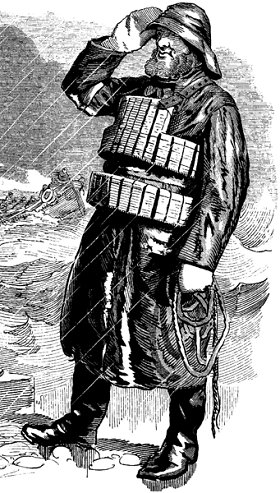 Two examples of rescue missions embarked on by the lifeboat Aaron Stark Symes in 1886 were reported by the RNLI in its journal of August that year. The first, on 30 March, involved the smack Dispatch which was headed for Dublin and was caught in “a whole gale from the N.W., violent hail storms and a heavy sea”. When the Aaron Stark Symes reached the Dispatch: “The vessel had carried away her standing rigging, was half-full of water, and altogether unmanageable, and her crew of two men were in a very exhausted condition. They were taken into the Life-boat and brought safely ashore. The smack sunk on the North Bull, inside Dublin Bar, and became a total wreck.” Then:

On the following night, while the schooner Esther Ann, of Belfast, bound from Dublin for Wexford with a cargo of wheat, was attempting to beat up Dublin river during rough threatening weather, her top-sail split as she was passing the North Bull Lighthouse, and she then anchored. The wind increased during the night to a whole gale, with a heavy sea, and at daylight the vessel was observed to be showing a signal of distress, and appeared to be in a very dangerous position. The Life-boat Aaron Stark Symes put off to her assistance, and after much difficulty succeeded in getting alongside her and taking off the master’s wife and two children. The master and crew decided to remain on board the vessel, which was ultimately towed to Dublin.

Elizabeth Atcherley Symes made a number of other charitable gifts during her lifetime – and even more after her death, in the form of bequests made in her will. She made bequests to descendants of her late husband too – sowing seeds which, unknown to Elizabeth, would lead to the development of a new surname: Atcherley-Symes.