We regret to announce that Mrs. Symes, of Gorphwysfa, Bangor, died on Saturday last, after a painful illness. The deceased lady had of late years become widely known by her noble benefactions to the Church and Church institutions. […]

Elizabeth Atcherley Symes, née Holt, granddaughter of the Rev James Atcherley of Shrewsbury, died on 7 June 1890 at the age of 81. Her obituary in the Gloucestershire Chronicle, after referring to her late husband, father and siblings, went on to give details of some of the ‘noble benefactions’ Elizabeth had given in her later years (the picture here is of Bangor Cathedral in the 1890s): 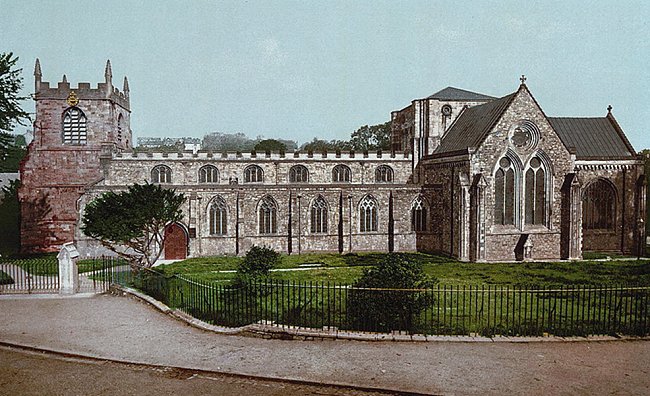 In 1883 Mrs. Symes gave £1000 for the erection of the beautiful reredos, sedilia, and panelled chancel-roof of St. Michael’s Church, Gloucester, as a memorial of her father and mother, who were interred in the church. Colonel W. J. Holt died at Bangor in September, 1880, and Mrs. Symes had erected in his memory the fine reredos in Bangor Cathedral, which was designed by Mr. J. Oldrid Scott, and which, with the sedilia and other accessories, cost between £700 and £800. After the distressing death of her friend Dean Edwards, of Bangor, Mrs. Symes built and endowed, at cost of £20,000, the Church of St. David, Glanadda, Bangor, as a memorial of the Dean.

Only a week before her death she sent a cheque for £300 towards the enlargement of Twigworth Church; and few days ago, in answer to a published appeal by Bishop Barry, she gave £500 to the Prendergast Homes for Poor Ladies. She was an annual subscriber of five guineas to the Gloucester Infirmary; and also sent £5 each Christmas to the Rector of St. Michael’s for the poor of his parish. Before commencing his sermon on Sunday the Rev. G. James said he had that morning been apprised of the death Mrs. Symes on the previous day, and spoke of her noble benefaction to the church and her oft-repeated gifts to the poor of the parish. The remains of Mrs. Symes were interred near those of her husband, brother, and sister, in Twigworth churchyard on Tuesday morning. […] We hear that Mrs. Symes has left the bulk of her wealth to institutions and charities.

After Elizabeth’s burial at Twigworth, Gloucestershire on 10 June 1890, the task of administering her wealth according to the terms of her will was begun by her executors (one of whom was her stepson Aaron Hilary Symes). That wealth was considerable: her personal estate was originally sworn (on 24 July 1890) to be £155,213 2s. 3d., a figure later revised upwards to £158,017 8s. 3d. Institutions and charities, including some created by Elizabeth’s legacies, were indeed major beneficiaries. These bequests were as follows (pictured below is the Royal Grammar School, Shrewsbury, at the Kingsland site to which it moved in 1882): 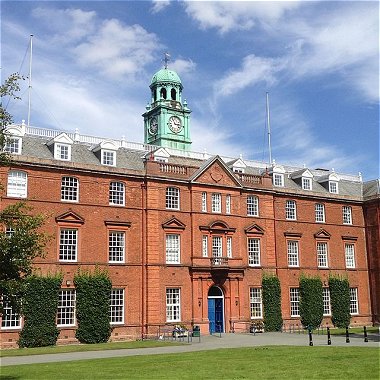 one for natives of Shropshire, and the other for natives of North Wales, for boys under 15, and preferably for those intending to take holy orders; such sum to the Ecclesiastical Commissioners as will make up the income of Dean Edwards’s Memorial Church, Glanadda, Bangor, to £300 per annum; and the residue of her pure personalty between the Gloucester Infirmary, the Carnarvonshire and Anglesey Infirmary, the Children’s Hospital at KingshoIm, Gloucestershire, the Governesses’ Benevolent Institution, Sackville-street, the Poor Clergy Corporation, the Clergy Orphan Corporation, the British Benevolent Institution for the Relief of Gentlewomen in Reduced Circumstances, and Dr. Barnardo’s Homes. The proceeds of the sale of her real estate and impure personalty are to be the primary funds for the payment of testatrix’s debts, funeral and testamentary expenses, and the legacies other than the charitable ones.

Elizabeth’s non-charitable bequests were those made to her relatives (by marriage), friends, and others: £10,000 to Aaron Hilary Symes; £2,000 each to Aaron’s two daughters Kathleen Leslie Symes and Elizabeth Atcherley Symes; £5,000 to her companion Alice Eliza Parris; £3,000 to Frances Parris; plus other gifts to the aforementioned Aaron and Alice, and many other legacies to nieces, nephews, godchildren and servants.

We ‘met’ Aaron Hilary Symes briefly in part 4 of this story, when he was an engineer with the Royal Navy. He joined the Navy in 1860, after ‘serving time’ (five years) at the Lambeth-based engineering firm of Maudslay, Sons and Field. His service, from his initial appointment as Acting Third-Class Assistant Engineer through to retirement, can be traced through newspaper reports of naval promotions and ship movements, The Navy List, census records, and of course from his official service record held at The National Archives.

These records show that Aaron was confirmed as a Third-Class Assistant Engineer (with effect from his enlistment on 14 February 1860) on 18 April 1861, and then progressed to Second-Class on 7 May 1861, First-Class on 23 February 1864, and finally to the full rank of Engineer on 25 July 1867. After spending his first few months aboard the Monkey, “to become acquainted with marine engines”, Aaron went on to serve aboard the Spiteful (from 5 September 1860), the Woolwich Checque (2 March 1863), the Princess Royal (13 February 1864), the Defence (13 January 1868 – pictured below), the Vivid (2 November 1872), the Royal Adelaide (by June 1873), and lastly the Wild Swan (28 August 1877). These vessels took him to Japan, Hong Kong, the Mediterranean, the West Indies, Nova Scotia, the Indian Ocean, and the East Indies. 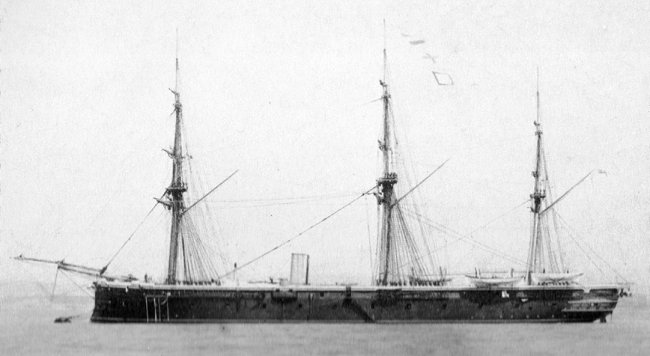 Through most of his naval career, Aaron’s conduct and qualifications were rated as “Very good”, with Admiral King noting as early as 1867 that Aaron was “Fit for and deserving of anything”. However he was, to his bitter disappointment, too far down a very long seniority list to have any hope of promotion to Chief Engineer. His father, Aaron Stark Symes, who had pushed for Aaron’s promotion to full Engineer in 1867, wrote again to the Admiralty in 1878 asking about promotion for Aaron but was rebuffed.

Ten years later, Aaron was able to express his thoughts about his (and other Engineers’) lack of advancement to a Committee appointed by the Lords Commissioners of the Admiralty, which had been convened “to Consider the Best Means of Securing the Highest Mechanical Skill and Scientific Knowledge in the Management of the various Engines of Her Majesty’s Ships of War, and the Supply of Engineer Officers and Engine Room Artificers for Her Majesty’s Navy”. He was at that time 210 places from the top of the list for promotion, and stated that the only thing he had to look forward to was his retirement at age 45, at which point he would still be earning ten shillings a day.

After his return to Devonport in October 1881, Aaron chose not to return to sea and paid off his ship “on account of the recent death of his father”. He was at that point reduced to half pay. In November the following year Aaron complained of rheumatism, and weakness in his right leg due to varicose veins. He was admitted to Haslar Hospital, and shortly after it was agreed that he would remain on Half Pay until he formally retired in November 1883.

Aaron married Katharine Isabel (or Isabella) Mather in Newcastle upon Tyne at the beginning of 1883. The couple settled in Berkshire, where they had three children. As we have seen, two of those children (Kathleen Leslie, born in 1884, and Elizabeth Atcherley, born 1886) were left £2,000 apiece in their step-grandmother’s will. The third child, Carey Hilary Symes, was born after the death of the family’s benefactor – sadly he died in 1897 at the age of 6.

The Symes family undoubtedly lived a comfortable life in Berkshire, being attended to by several servants. When Aaron died there in 1905, aged 67, he left effects valued at £38,271 and ensured that those he left behind – just 22 years after his marriage to Katharine – were well provided for.

The 1911 census recorded Aaron’s daughter Kathleen Leslie Symes at Maida Vale, Paddington, London, where she was (if my reading of her occupation is correct) a philanthropic worker with the Church Missionary Society. She later went to India and became the honorary superintendent of the Sandes Soldiers Homes there. In 1925, it is written, she “visited Singapore to explore the possibility of starting a similar home” there. A suitable site could not then be found, but Kathleen had better luck at the end of the 1940s and a Sandes Home was opened, near the Alexandra Military Hospital, in 1949. She died on 1 February 1963 and a headstone erected in her memory can be found at Singapore’s Kranji Military Cemetery; there is also a plaque (originally situated in a memorial garden) in the collection of the National Museum of Singapore.

Returning to the census of 1911, Aaron’s widow Katharine Isabel Symes, aged 53 and living on private means, was enumerated at Eastbourne, Sussex, with her daughter Elizabeth Atcherley Symes and two servants. Katharine lived until 19 February 1942, when she passed away in Surrey – probably at the Croydon nursing home where she had been recorded on the 1939 Register taken shortly after Britain’s entry into the Second World War. 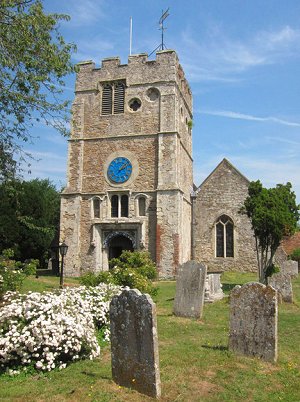 The 1939 Register also featured Katharine’s daughter Elizabeth who was living in Hurst Way, Croydon – about a mile away from Katharine’s nursing home in Birdhurst Rise. Elizabeth had by this time been married and widowed. She wed the Rev George Wright, a Chaplain to the Forces, in 1918 at Hindhead in Surrey, and so became Elizabeth Atcherley Wright. George died at the age of 50 at the Royal Alexandra Hospital in Rhyl in 1936, but prior to this he and Elizabeth had lived at the Vicarage in Appledore, Kent (the parish church is pictured here). Elizabeth survived her husband by 35 years or so, her death being registered in the first quarter of 1972 in Kent.

Curiously, Elizabeth’s entry in the 1939 Register read “Atcherley Wright, Elizabeth” – was the name Atcherley by then regarded as part of her surname rather than as a second forename? It would seem so, as a newspaper report of a schoolboys’ lawn tennis tournament in 1935 showed that G (Graham) Atcherley-Wright was beaten in the first round of the open singles.

Graham was the first of three children born to Elizabeth and her husband George, that happy event taking place on on 23 December 1918 in Kent. Two girls followed: Mary Atcherley Wright on 24 June 1920 (who married Frederick West in 1942 and died as Mary Atcherley West in 1991), and Rachel Atcherley Wright on 31 July 1922 (she married Ernest Edgar Spink in 1946 and died as Rachel Atcherley Spink). Graham was actually named Edward Graham Wright when his birth was registered, but as we have just seen that was to change. In fact it was to change more than once!

Graham still had the surname Atcherley-Wright in October 1940, when he was one of several Cadets from Sandhurst, and 162nd Officer Cadet Training Units, who were to be 2nd Lieutenants (in Graham’s case, in the Royal Welsh Fusiliers). Then, on 11 May 1941, “at Charing Parish Church, Kent, Second Lt. Graham Atcherley-Wright, only son of Mrs. Atcherley-Wright and of the late Rev. George Wright, M.C.” wed Dorothy (Dodo) Errington-Wales. It appears that the couple separated within a few years: by a deed poll dated 10 December 1945, Dorothy, a married woman, “renounced and abandoned the Christian names and surname of Dorothy Errington Atcherley-Wright and assumed the Christian name and surname of Dodo Errington”.

The couple later divorced, and Graham remarried – but not before changing his own name once more, by deed poll, to Graham Atcherley Atcherley-Symes. His name later morphed again, his forenames returning to those given to him at birth, but his surname remained unchanged. And so it was that the death of Edward Graham Atcherley-Symes was registered in 1984. Today his children and grandchildren bear the surname he created, a surname which remembers the family’s illustrious Symes ancestors and its connection with the name of Atcherley.