I never thought it would be possible to write much in the way of a story about the life of John Atcherley of Kinnersley (nowadays Kynnersley). As a son of agricultural labourer Henry Atcherley (my 2x great grandfather), John was destined for a life of relative obscurity. He never married, and as far as I know he did not father any children out of wedlock. So although we have records for his birth and death, we have nothing relating to matrimonial events, or to the births, baptisms, deaths or burials of children, which would help with tracking this Atcherley’s adult life between censuses. Other sources of information have come to light however, which have enabled me to follow John’s journey.

] was the fourth child, and first son, of Henry Atcherley and his wife Mary (née Jones). The last of this couple’s children to be born at Eyton-on-the-Wild-Moors (usually known as Eyton), he was baptised there on the last day of September 1855 (Eyton St Catherine is pictured right). When the census of 1861 was taken, the enumerator found John with his parents and siblings at Sidney, in Kinnersley parish, where Henry lived and worked for many years as an agricultural labourer.

Adult life for John – if we take starting work as the beginning of it – commenced when he was in his early- to mid-teens. By the time of the 1871 census John had left home, and a life of farm work was under way. Recorded as ‘John Hatcherly’, aged 15, he was one of two indoor farm servants employed by widower John Davis, who farmed 190 acres at Wrockwardine Bank, in the parish of Wrockwardine.

Within two years of that census, John Atcherley was back home at Sidney. Around the beginning of 1873, when he was 17 years old, John had started working for Richard Taylor of Sidney House (who almost certainly employed John’s father Henry too). He would remain in Mr Taylor’s employment for many years to come.

This information comes from the Wellington Journal of 26 September 1896, specifically its account of that year’s annual meeting of the Wellington Farmers’ Club. One of the club’s committee members was R Taylor of Sidney House. The newspaper reported:

Among the prizes offered for farm servants probably none are more to be commended than those given for length of service. It is interesting—almost remarkable—that there are 73 servants of members of the club who have been in the employ of the same master and mistress over 20 years, one going as high as 57 years and several over 50.

The Journal noted that the total number of years’ service clocked up by the 73 servants was 2,222¼ and that their average length of service was 30½ years. The prize awarded to these loyal men and women was £15 – to be shared between them! One of their number was “J. Atcherley”, who had then been in the employ of Mr R Taylor for 23¾ years.

The 1881 census shows 36-year-old Richard Taylor as a farmer of 354 acres, employing seven labourers and two boys. From newspaper reports it is apparent that Richard bred livestock (Shropshire sheep and shorthorn cattle), occasionally won prizes for his cart horses, had butter made on the farm, and grew root crops (mangolds and swedes) and cereals including barley. He also acted as judge in the farm implements class at shows, was involved in the running of the Wellington Farmers’ Club, and was a Shropshire County Council councillor and a Justice of the Peace. My feeling is that he was a public-spirited man and a good employer.

The same page of the 1881 census schedule shows John Atcherley living with his parents and two of his younger brothers in one of the cottages at Sidney. His father Henry was recorded as a labourer, but whatever was written on the schedule regarding John’s employment was heavily crossed out. We know, of course, that he was engaged in farm work of some kind for Richard Taylor.

“John Atcherley / Son / Present at the Death” was the informant when the death of Henry Atcherley, who passed away on 9 January 1886 at Sidney, was registered. John made his mark rather than signing the register. John then became the head of the Atcherley household at Sidney, and was shown as such on the 1891 census. His widowed mother Mary, aged 62, was the only other occupant and the exact nature of John’s employment was revealed at last: he was a waggoner.

According to Rootschat forum member Stan Mapstone, a waggoner “looked after the horses under his control and drove them in accordance with whatever work was to be undertaken, e.g. ploughing, reaping, [harrowing], carting, etc. Otherwise he drove a horse-drawn heavy four-wheeled wagon, conveying produce […] to a market, or railway station.” 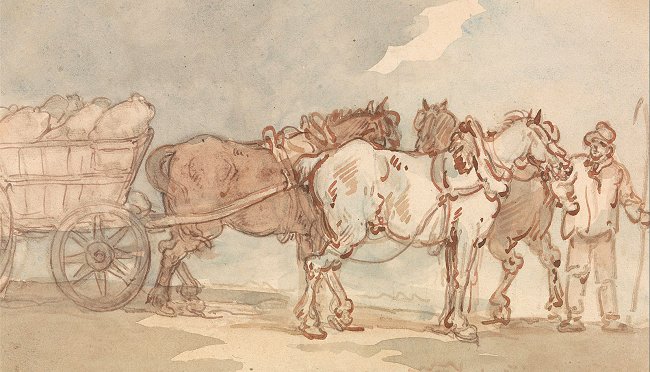 In describing some of the work undertaken by farm horses, An Encyclopædia of Agriculture (1826), by extension also gave an indication of the work of the waggoner in charge of them. The work performed by such horses obviously varied, but the Encyclopædia stated “a pair of horses, in ploughing, may travel daily from ten to fifteen miles” and, on a well-made road, would “draw about a ton in a two wheeled cart for twenty or twenty-five miles every day”. The horses might be in the yoke for nine or ten hours a day during the Summer (with two hours’ feeding and resting from noon), but only from five to eight hours in Winter.

Thanks to the reports issued by the Commission on the Employment of Children, Young Persons, and Women in Agriculture around 1870, we know that waggoners were generally paid a little more than general labourers on farms, because of the time involved in looking after the horses. They were paid sums ranging from 10 to 15 shillings a week. Often they had the use of a cottage (with a garden or a small piece of land on which to cultivate potatoes and/or rear a pig), plus an allowance of beer or cider, and maybe meals (particularly during the harvest season).

Although there were ‘perks’ for waggoners, there were also dangers, as the following report from the Wellington Journal of 24 June 1899 illustrates:

Shocking Death of a Waggoner.—On Saturday an inquest was held at Sydney before Mr. J. W. Littlewood (deputy coroner), touching the death of John Brown, a waggoner, in the employ of Mr. Richard Taylor of Sydney House.

John Atcherley, a fellow-waggoner of the deceased, said they had worked for Mr. Taylor for many years. On Saturday morning they started to go from Sydney to Eaton, each in charge of a waggon and three horses. Deceased was with the first waggon, and he was then in his usual health and spirits, and knew his team well.

The mare in the shafts was restless. On turning towards Crudgington his horses began to go at a sharp trot round the corner. Deceased had hold of the shafter on the near side. As witness followed round the corner he saw the first team had gone too near the bank, and deceased fell and was crushed between the waggon wheels and the bank, and the vehicle went over his legs. Witness stopped his team and ran to deceased’s assistance. He found him badly hurt, and said ‘Are you hurt, Jack?’ he replied, ‘Yes, badly.’ I procured assistance, and Mr. Taylor and others came and attended to him.

Mr. Richard Taylor stated that he was sent for to the place mentioned by the last witness, and he found deceased lying at the side of the road; he was brought home and Dr. Hawthorn was sent for. He died shortly after reaching home. Deceased before he died said the horses had swerved to the left side, that he ran up the bank, slipped, and fell on the wheel, which had gone over him. Deceased was a steady and reliable man, and had been in his employ for many years.—The jury returned a verdict of ‘Accidentally killed.’

A little under two years after this tragic event, the 1901 census enumerated John Atcherley not at Sidney, but at an address in Beaumaris Lane in the town of Newport. The house was rather crowded to say the least, containing three generations of Atcherleys. The head of the household was John’s widowed brother Samuel, who had two of his three children living with him. John’s sister Emma Steventon was there too, with one of her two sons. Emma too had been widowed. As had the oldest family, Mary, mother of John, Samuel and Emma.

John Atcherley was now 45, and said to be an ‘ordinary labourer’ – clearly he was no longer working for Richard Taylor of Sidney House. I have no idea why this was so, but I do know roughly when Atcherley and Taylor parted company. The Wellington Journal’s report on the Wellington Farmers’ Club’s show of July 1899 included John Atcherley in its list of long service award winners, but John’s name was missing from the corresponding report for July 1900. Between these dates, in April 1900, R Taylor of Sidney House advertised for a waggoner; a “good steady man” who would have the use of a cottage and garden.

By 1911 John was not only working for Richard Taylor again, he was also living alongside him as a “farm servant (domestic)” at Sidney House. It seems likely however that the following year, it was “all change” again. Sidney House Farm at Kinnersley – described as a house with 7 bedrooms, beer and wine cellars, and six cottages (known as Sidney Cottages) with 353 acres of land, was Lot 190 of the Lilleshall Estate sale of 1912.

Richard Taylor and his wife Martha may have moved to Wellington after this; Richard died there, at Spring Hill House, on 29 February 1924. It appears that John may have followed his employer to Wellington. John Atcherley, a farm labourer of “118 off Wrekin Road, Wellington” died at 18½ Holyhead Road in that town (in reality, the Union Workhouse at 181-2 Holyhead Road) on 22 March 1927.