The 1870s brought huge changes for the family of Edward Ryley and his wife Mary Ellen, née Atcherley. The family increased in size as more children were added. After a decade or so as a horse hair manufacturer, Edward abandoned this business and, having previously had a partnership with his brother Thomas Heath Ryley, entered into a new one with a man named Thomas Heath! Finally, the family faced the challenge of emigration – and the death of two of its members.

Families, for the most part, do not exist in isolation. Connections are important, and discovering even simple connections within and between family units is, for me, one of the joys of family history research. Take for example a cricket match which took place at Waters Upton in Shropshire on Tuesday 3 October 1871 and which was reported on by the following Saturday’s edition of the Newport & Market Drayton Advertiser. 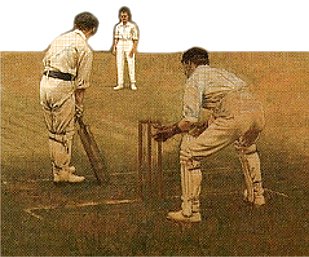 The local team played that of Peatswood, near Market Drayton, a team which included E Ryley – almost certainly Edward. One of the Waters Upton team members, named in the match report as W E Atcherley, could only have been William Henry Atcherley of Moortown in the neighbouring parish of Ercall Magna – Edward Ryley’s brother-in-law. “The weather was hardly what could be desired, but allowed one innings being played on either side.” It was not a high-scoring match, and Waters Upton won by five runs, but for me the story here is not the score but the ongoing connection between the Ryley and Atcherley families which began with the union of Edward and Mary Ellen.

As we have seen, by April 1871 (when that year’s census was taken) Edward and Mary Ellen had six children, two of whom, Robert Atcherley and William Henry, were named for Mary’s father and brother respectively. At the time of the cricket match which pitched (pun intended) Edward Ryley against William Henry Atcherley, Mary Ellen was expecting the couple’s seventh child. Percy Ryley made his appearance on 25 December, which I hope made Christmas Day doubly delightful. He was baptised at Little Drayton on 12 March 1872.

More children followed: Florence in 1873, Norah Eveline in 1875, and Lilian Gertrude in 1877. There would be an eleventh child too, but by that time the Ryleys would be a long way from Market Drayton. More on that later.

Florence Ryley, like Percy, was baptised at Little Drayton, on 11 August 1873. The record of this ceremony showed that her father Edward was a “Hair Manufacturer”; the corresponding entry in the register for Percy’s baptism simply said “Manufacturer” (I can find no baptism records for Norah or Lilian). The manufacture of horse hair seating was a business which I believe Edward had pursued alone since his partnership with his brother ended in 1869. I reached this conclusion only after a good deal of confusion, which I cleared up by gathering and carefully weighing up several pieces of evidence!

Kelly’s Post Office Directory of Shropshire, Staffordshire, and Worcestershire for 1870 stated that there then four firms manufacturing horsehair seating in Market Drayton, as did Edward Cassey & Co.’s History, Gazetteer, and Directory of Shropshire published in 1871. This was an increase of one firm since the directories of the early 1860s were published, and no doubt reflected the Ryley brothers’ split.

Both of these directories also included  “Ryley Thomas H. The Mount” as one of the private residents (or, in Cassey’s directory, gentry) of Market Drayton, while in the same listings for Little Drayton there was “Ryley Mr. Edward, Victoria mills” and “Ryley Mr. Edward, jun. [plain “Ryley Mr. Edward” in Cassey’s] Shropshire street”. Then, in the commercial listings for Little Drayton, both directories included “Ryley Edward & Sons, horsehair manufacturers, Shropshire street” and “Ryley Edward, jun. [again, plain Ryley Edward in Cassey’s] horsehair manufacturer, Victoria mills”. My confusion arose from these directories’ misunderstanding regarding the company trading as “Edward Ryley and Sons” – by 1870 it was being run by Thomas Heath Ryley alone, but retained the old name! 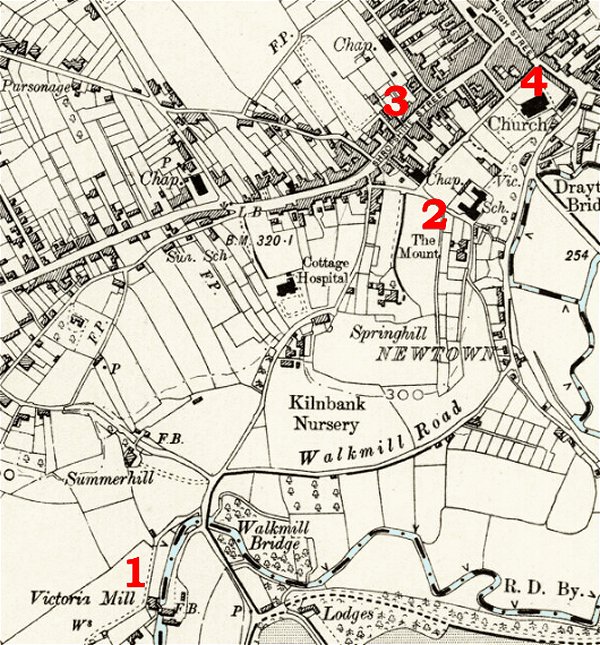 Edward Ryley (still referred to as ‘junior’ by some despite the death of his father in 1869) had his residence in Shropshire Street (as shown on the 1871 census), but his business was conducted at the former family home of the Ryleys, Victoria Mills. The latter point is confirmed by two newspaper reports, the first appearing in Eddowes’s Shrewsbury Journal of 10 August 1870: “Chimney Sweeping.—Mr. Edward Ryley was summoned at the instance of a chimney sweep, named Saunders, for allowing a youth under 21 years of age to cleanse a flue at the Victoria Mills. Fined 10s., to include costs.” The second was printed in The Staffordshire Sentinel on 1 October 1870:

POLICE INTELLIGENCE.
MARKET DRAYTON.—Saturday.
(Before Egerton Harding, Esq., Colonel George Hill, Colonel Broughton, and John Tayleur, Esq.) […]
Breach of Contract.—Eliza Gilford, a factory hand, was charged by Edward Ryley, of Victoria Mills, with unlawfully absenting herself from service. From the evidence of complainant it appeared that the defendant was engaged to secure a piece hair-seating, but that when only part done she absented herself from work, and caused him annoyance and loss. He did not wish to press the case, but being offence of frequent occurrence he brought it forward that other hands might clearly understand what they were required to do. Defendant was ordered to fulfil her contract, and to pay costs.

The following notice, which appeared in the London Gazette of 22 August 1871, shows not only that Thomas Heath Ryley was trading under the name of Edward Ryley and Sons, but also that he was having financial difficulties:

The Bankruptcy Act, 1869.
In the County Court of Cheshire, holden at Nantwich and Crewe.
In the Matter of Proceedings for Liquidation by Arrangement or Composition with Creditors, instituted by Thomas Heath Ryley, of Market Drayton, in the county of Shropshire, Horse Hair Manufacturer, trading as Edward Ryley and Sons.
NOTICE is hereby given, that a First General Meeting of the creditors of the above-named person has been summoned to be held at the office of Mr. John Leigh, Solicitor, No. 30, Brown-street, Manchester, on the 11th day of September, 1871, at three o’clock in the afternoon precisely. […]

A further notice was published in the Gazette of 15 September 1871, announcing a second creditors’ meeting, but I have found no further information about this case (I can’t help wondering whether his brother Edward ‘bailed him out’). What I have found is that Thomas Heath Ryley continued to operate his horse hair manufacturing business, and kept his home at The Mount in Market Drayton, at least for a few years. Evidence for both of these things can be found in the baptism records for his children Kate Duckers Ryley (at Market Drayton on 27 July 1872) and Bertie Thomas Ryley (at Little Drayton on 7 March 1874).

There is also evidence which confirms that ‘Edward Ryley and Sons’ was (as indicated in the aforementioned directories of 1870 and ’71) operating from an address in Shropshire Street. Newspaper notices show that in August 1872, a “SHOP with DWELLING-HOUSE attached, Bakehouse, very extensive Warehouses […] situate in Shropshire-street, Market Drayton, and now in the occupation of Mr. Elijah Yeomans, baker and provision dealer, and Mr. T. H. Ryley, horse-hair seating manufacturer” was to take place. The same property was advertised as being for sale by auction in January 1875, this time described as a “DWELLING-HOUSE with Front Shop and Bakehouse, large WAREHOUSE, used as a hair-seating manufactory, GARDEN, &c., in Shropshire-street, occupied by Mr. Thomas Lutener and Mr. T. H Ryley.” 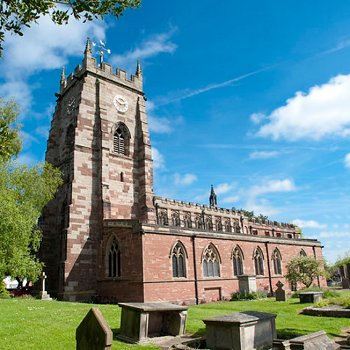 This sale may have dealt the final blow to Thomas’s business. When his next child, Mary Beatrice Ryley, was baptised on 26 April 1875 at Market Drayton St Mary (pictured left), Thomas Heath Ryley was described as a Commercial Traveller. He was still undertaking this work at the end of 1876, when his daughter Florence Julia Ryley was baptised (on 31 December) at Nechells St Clement in Birmingham. The last addition to Thomas’s family, Edward William Ryley, was born in West Ham on 29 September 1878. West Ham was where Thomas died in July 1879.

Coincidentally, 1875 was also the year when Edward Ryley lost (or gave up) his business premises at Victoria Mills. I wonder if the family had any inkling of things to come in the summer of that year, when they would I’m sure have celebrated the fact that the Edward junior, a pupil at Admaston College, received a prize for being first in the 4th Division of that institution? In November that year this notice appeared in the press: “TO BE LET, at Market Drayton, Shropshire, a FACTORY, with all the necessary steam power and machinery required in the horse hair seating manufactory. The premises are convenient, and the whole has been lately occupied by Edward Ryley.”

I have yet to discover how Edward sustained himself and his family for the following two and half years, but at the end of that period another business venture beckoned:

HEATH BROTHERS, Auctioneers, beg to return their thanks for the very liberal support that has been accorded to them, and to notify that the Firm has this day been DISSOLVED by mutual consent, Mr. E. R. Heath retiring. The Business will in future be carried on by Mr. THOMAS HEATH, in conjunction with Mr. EDWARD RYLEY, under the style of “Thomas Heath and Edward Ryley,” who hope by careful attention to business, combined with prompt settlements, to merit patronage and support.
Market Drayton, July 14, 1877.

The above was followed by the first of a series of notices placed in the press by Heath and Ryley, advertising livestock auctions in Market Drayton and later also in Crewe (examples are given in the references below). As I found more and more of these during my research, I began to wonder whether these business partners were also related by blood. Edward Ryley’s mother was, before marriage, Mary Ann Heath. Also, Edward had a brother named Thomas Heath Ryley, and I discovered that the former business partner of Thomas Heath was a brother named Edward Ryley Heath! It turns out that the parents of Edward Ryley were a brother and sister of the parents of Thomas Heath. The duo had the same four grandparents and were double first cousins. See, I told you I enjoy finding family connections! 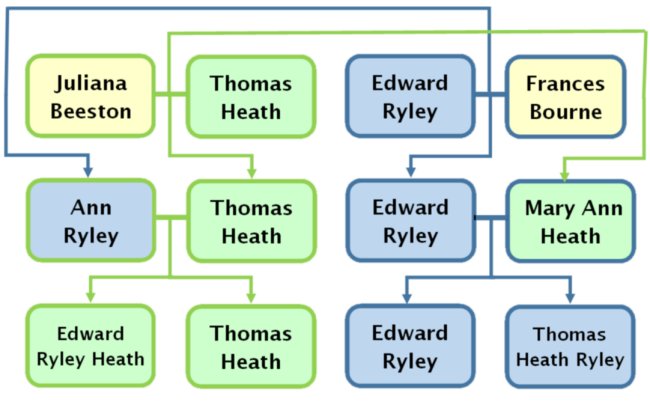 The sale of “SALE of FAT and STORE STOCK” held by Thomas Heath and Edward Ryley on 26 December 1878 was their last. Their business partnership was dissolved on 31 December that year, with Thomas Heath carrying on the business by himself. On Monday 24 March 1879 Thomas was “favoured with instructions from Mr. Edward Ryley”, who was “leaving the neighbourhood”, to auction off Edward’s “HANDSOME and Valuable HOUSEHOLD FURNITURE and EFFECTS, comprising dining, drawing, and bed room furniture (in mahogany), fine-toned cottage pianoforte (full compass, in rosewood, by Hopkinson), Brussels carpets, mahogany, birch, and iron bedsteads; mattresses, large oak wardrobe, mahogany and painted chests of drawers, glass, china, and other household effects about 350 vols. of Books (in suitable lots).”

On 3 July 1879 Edward and Mary Ellen Ryley, with their seven youngest children (and one yet to be born), departed Southampton aboard the SS Teuton. They were intending to start a new life in Natal, but for two members of the family that life was to be cut short. The following appeared in Eddowes’s Shrewsbury Journal and Salopian Journal of 10 December 1879:

Melancholy Death in South Africa.—Many of our readers will be sorry to hear that Mrs. Edward Ryley, who, in company with her husband and family, left this town for Natal some months since, succumbed to an attack of [dysentery], and died at Durban, Natal, on the 16th October last. One of the children, Norah, aged five years, died from the same complaint seven days previous to the decease of her mother.