I love the fact that even after spending many hundreds of hours researching the Atcherley family, its members can still surprise me. One such surprise, a bombshell in fact, came when I looked at the expanded collection of London Workhouse records at Ancestry this week. In one of the Porters Admission and Discharge Registers for Christ Church Workhouse, Southwark, was Henry Atcherley [

], who had died in the workhouse on 15 March 1900. Listed in the column headed “Address of Relations or Friends” was a niece, Mrs Tilley, who I recognised. Beneath this entry was the bombshell, someone I certainly did not recognise: a son of Henry Atcherley, named William Lockyer!

This discovery has sparked a few days of intensive research into Henry Atcherley and his complicated family life. Although some gaps in my knowledge remain, I now know much more about Henry and those who were, if only temporarily, close to him. In this article I will look at the early part of Henry’s life, and the first of his two families.

Henry Atcherley was born on 23 April 1824 at Walworth in the parish of Newington, Surrey. However he was not baptised until 1 January 1832. The baptism register of Newington St Mary shows that Henry originally had two forenames – William Henry – the first of which he dropped. The register also shows that Henry’s older brother George Atcherley [

] (born on 9 August 1819) was baptised with him. The entries for the two boys recorded their parents’ names as James and Sarah Atcherley, their family’s abode as Missionary Place, Walworth, and the “Quality, Trade, or Profession” of their father as “Gent”. James was certainly a Gentleman, but he was also a retired Captain of the Royal Marines (see An Atcherley at Trafalgar). And although Sarah [

], the mother of George and Henry, was given the surname Atcherley she was not in fact married to James. Her real surname, which she chose not to use, was Perkins.

Within three years of the baptisms of George and Henry, Captain James Atcherley was dead. This left Sarah to complete the upbringing of his youngest sons. The trio did not remain at Missionary Place. By 1841 Sarah, George and Henry were living nearby at Clandon Street in Walworth. The family name was not written accurately or clearly on the enumerator’s schedule – my reading of it is “Alcherty”. One result of this is that now, over a century and half later, transcriptions of the surname on the major genealogy websites include Alberty and Alchesty. I found these ‘missing’ Atcherleys by searching for Henry (no surname), born 1824 (+/- 2 years) in the St Mary Newington Registration District.

The 1841 census is the last record in which I have found Henry’s older brother George. He was then aged 21 and he was working as a labourer, his fate is unknown. It is also the last census on which another brother, John Atcherley [

] (born 26 October 1817), appeared. He was enumerated at Greenwich, Kent, on the Dreadnought Hospital Ship for Seamen. Though he was 23 years old his age was (like George’s) rounded down to 20 on the census schedule. He was an Able Seaman, but the letter ‘P’ written beside that designation showed that he was a patient.

The Dreadnought, a former Royal Navy man-of-war run by the Seamen’s Hospital Society. The census showed that on the night of 6/7 June 1841, in addition to John and his fellow patients, the ship was occupied by two surgeons, three medical surgical pupils, a nurse/barber, five nurses, naval crew with families, and a female servant. When John Atcherley died aboard the hospital ship on 16 October 1841, he passed away on a vessel which had fought with his father’s at Trafalgar. John was buried at Walworth St Peter on 23 October 1841, the place where James Atcherley of the Royal Marines had been laid to rest some seven years earlier.

] is that he was born on 26 October 1815 and that he survived long enough to be baptised, along with his younger brother John and one of his two older sisters, Eleanora, at Newington St Mary on 2 January 1818. (For more on Eleanora, and her sister Ann, see The marital histories of Ann and Eleonora Atcherley.)

As for Henry Atcherley, he was 17 at the time of the 1841 census (his age was rounded down to 15 by the enumerator), and he was employed as an engineer. He would spend most of his remaining years fitting, driving or otherwise working with steam engines. On 13 August 1850 Henry was ‘ticketed’ as a merchant seaman (Register Ticket 478,836, Capacity Engineer). Although his entry in the register of merchant seamen stated that Henry first went to sea (as an engineer) in 1850, it showed no reported voyages from 1845 to 1854. The register did however record a few facts about Henry’s appearance. He was 5 foot 7¼ inches in height and he had a fresh complexion, brown hair, blue eyes, and no distinguishing marks.

The census of 1851 found Henry, an engine fitter, at 16 Brandon Street in Walworth with his mother. Sarah declared her surname to be Atcherley, and her marital status as Widow. Henry on the other hand stated that he was unmarried. Although this was true, the same census included, elsewhere in the same parish, a woman who had, like Henry’s mother, taken the Atcherley surname without having actually married. The ‘husband’ of the woman in question was Henry, although he seems to have been an ‘absent father’ at that time.

Arabella Atcheby (as her name was written), a dress maker aged 25, was living at London Street, Newington, with her daughters Arabella [

], 3. All were born at Newington. Although Arabella stated that she was married, I have found no record of such an event. The birth certificate for her first daughter (see extract below) shows that she was Arabella Dackombe [

], and her age and birthplace indicate that her parents were Daniel Dackombe and Mary Ann (née Rook). She was born 11 May 1826 at Newington and baptised 14 June 1829 at Walworth St Peter.

The baptism register of Walworth St Peter shows that Arabella’s daughter Arabella Maria Atcherley was born 19 May 1845 and baptised on 7 September 1845, when the family’s abode was at Lambeth. The register for St Mary Newington meanwhile shows that Ellen Sarah Atcherley was born 5 October 1847 and baptised on 19 May 1850, when the family was living in Guildford Street. In both cases the girls’ parents were named as Henry and Arabella Atcherley, and their father’s trade recorded as Engineer.

Between the arrivals of these two girls another daughter had been born – and had also died. As with her sisters, the birth of Mary Ann Atcherley [

]  was registered (so too was her death), however she was not baptised. She was interred, aged just 6 weeks, on 20 November 1846 at Walworth St Peter (pictured below), the burial register showing that her family’s home was in Eltham Street. Another daughter by the name of Mary Anne was to follow. It appears that Henry’s spouse Arabella (perhaps, at that point, his ex-spouse) was pregnant when the 1851 census was taken, and that Mary Anne Atcherley [

] was born later the same year. I have, unfortunately, found no record of her birth being registered, nor of a baptism taking place. 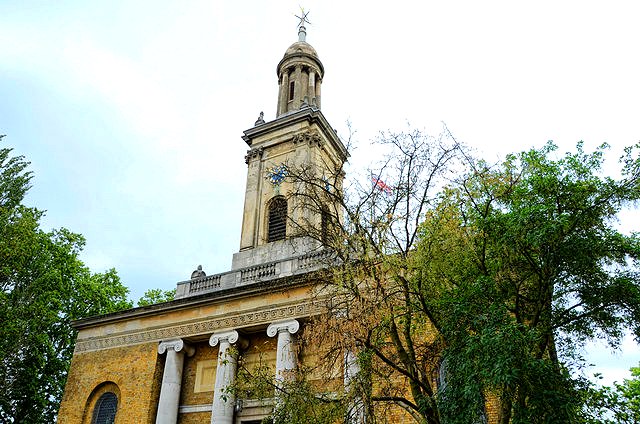 Ten years on, Arabella was still a dressmaker living at Newington (at 5 Frederick Street), now with three girls, and she gave her status as ‘wife’. But by this time her family’s surname had been corrupted further, to Atchley. It was to remain that way, with all three daughters using it when they married.

Banns of marriage between Arabella Maria Atchley and John George Hilder were read at Christ Church in Southwark in April 1870 (the register giving Arabella’s surname as Hatchley). Although these banns were not followed by a wedding at that time, the couple appeared on the 1871 census as John G and Arabella M Hilder, a married couple. Banns were read again, at the same church, in December 1873 (this time John was said to be a Widower rather than a Bachelor), but once again there were no nuptials. John and Arabella finally tied the knot, at Emmanuel in Camberwell, on 26 December 1875. John’s death was registered at St Saviour Southwark about three years later in the first quarter 1878, but I have not found any further records for Arabella.

Ellen Sarah Atchley married with her first cousin Aquila Dackombe at Newington Trinity on 29 March 1869 (Aquila later acted as a witness when John Hilder finally ‘made an honest woman’ of Arabella Maria Atchley in 1875). Aquila and Ellen lived at Flint Street, Walworth, where they had seven children before Ellen died in 1881. More information about this family can be found on the Dackombe Family History and Genealogy website.

Mary Anne Atchley wed Thomas Gussin, a brewer, at Newington on 3 August 1873 and resided with him in Lambeth until she passed away in 1891. Her husband survived her by a mere two years, his death being registered in 1893.

Arabella, Ellen and Mary Atchley all named their father as Henry Atchley, an engineer, when their marriage register entries were completed. Whether there was any contact between Henry and his daughters around this time however is debatable, although it can’t be ruled out as Henry continued to live in or near to Walworth. (As we will see, at one point he resided in Flint Street during the period when his daughter Ellen and her husband Aquila Dackombe had their home there.)

I have yet to find the mother of Henry’s daughters, Arabella Atchley, on the 1871 census. By 1881 however she was lodging in the household of Alfred T Buckingham and his family, at 19 Nursery Row, Newington. Now aged 53, she was still earning her living as a dressmaker. And it seems she had finally accepted that her relationship with Henry was over, as she described herself as a widow. She did so again two decades later when enumerated (as Bella Atchley) for the 1901 census at 26 Pitman Street, Camberwell. By that time Arabella was living with relatives, the Deacon family (she was recorded as an aunt), and was supported by Parish Relief. She had also lost her sight – the Infirmities column of the census schedule showed that she was blind. It is the last census on which I have found her.

The last census on which Henry’s mother Sarah appeared was that of 1861. Living at 59 Brandon Street, and still referring to herself as the widowed Sarah Atcherley, she was 59 and supporting herself by working as a needlewoman. Her death, towards the end of that year, was registered at Newington under her real name, Sarah Perkins. Her son Henry Atcherley was not recorded on that year’s census however – or so I thought. It turns out that, like his mother, he was not averse to changing his surname. Furthermore, it appears that he also took a leaf out of his father’s book – by abandoning his first spouse and children, and starting a second family with another woman.