Shrewsbury, August 8th, 1809. WHEREAS Mr. JAMES ATCHERLEY, of Princess-street, Shrewsbury, Jeweller and Cutler, left his dwelling house in the night of 4th day of July last, without informing his family or friends of his leaving the same, and he hath not been heard of since:—a REWARD of TEN GUINEAS will be paid to the first person who shall give information at the Bank of Messrs. Rowton and Morhall, Shrewsbury, where the said Mr. James Atcherley now resides and may be met with; the said reward to be paid as soon as he is discovered with certainty to be the person now advertised for.

] was the last of six sons born to gentleman farmer Thomas Atcherley and his wife Hannah (née Cureton) of Stanwardine. At the time of James’s birth Thomas Atcherley was aged 59, and had only 12 more years to live. He died on 7 April 1796, aged 71, having made a will in which he left his lands and property to his two oldest sons, and £400 apiece to his four youngest. James was to receive his inheritance on reaching his 21st birthday, and he was to receive the interest on it in the meantime.

In the year before the death of Thomas Atcherley, his fourth son William had been apprenticed to John and Edward Hughes, a firm of ironmongers in Shrewsbury. After Thomas’s death, his widow Hannah set about arranging apprenticeships for the couple’s two youngest boys, Edward and James. Edward was apprenticed for 7 years to “Wm. Grifiths” of Wem, a mercer, on 28 May 1796. James Atcherley was placed, at a cost of £42, with Messrs Richards & Morris of Shrewsbury, “Cuttlers”, with whom he started his 7 years on 13 June 1796.

Given that James was a jeweller and cutler in 1809, we might assume that he completed his apprenticeship. There is however evidence which indicates that, at the very least, his time with Richard & Morris was interrupted. On 13 July 1801 at the age of 17, “James Atcharley” of “Basschurch” enlisted at Wellington, Shropshire with the 1st Foot Guards (which in 1815 became the Grenadier Guards).

The fact that James enlisted with the Foot Guards and completed an attestation form does not necessarily mean that he served with that unit for a particular period of time. Barbara Chambers, who has researched the relevant documents, says: “There are attestations for men who only briefly served in the Regiment often only days”. Whatever the length of his service with the Foot Guards, James was evidently keen to return to military service afterwards and play his part in defending Britain from the French. (See also An Officer and a Gentleman: Roger (or Rowland) Atcherley.)

On Christmas Eve 1808, James Atcherley, Gent., became an Ensign in Shropshire’s Centre Regiment of Local Militia. The confirmation of this printed in the London Gazette of 20 June 1809 (see above) was almost certainly a correction of an earlier notice, in the Gazette of 15 April 1809, which incorrectly named James as “John Atcherley”. Regiments of Militia had existed in Shropshire (and elsewhere) for some time, but the Centre Regiment of Local Militia was, as far as I can tell, formed as a result of an Act of Parliament passed in 1808. Robert Holden, in his Historical Record of the Third and Fourth Battalions of the Worcestershire Regiment (published 1887), wrote about the creation of Local Militias as follows:

In June an Act (48 Geo. iii. c. 3) was passed ‘for enabling His Majesty to establish a permanent Local Militia Force under certain restrictions, for the Defence of the Realm;’ by which a force six times the size of the Regular Militia of the kingdom was obtained by ballot, consisting of men between the ages of eighteen and thirty, who were enrolled for four years, no substitutes being allowed.

One of the chief reasons for the establishment of the Local Militia was, as was well known at the time, the feeling on the part of the authorities that no reliance could be placed on the volunteer force which was then in existence, and had been since the threatened invasion of the country in 1803. Volunteering at that time, though in many cases very hearty and patriotic, was at best never anything else than playing at soldiering. The members of the various corps were only civilians in uniform. Discipline was very imperfect, and at any fancied affront a man gave in his musket and walked off. […] the volunteers of nearly every county transferred their services to the Local Militia, and regiments were formed strictly under the articles of war.

Although the Local Militia required men to serve for four years, this was not four years of continuous military service. Militia men continued to undertake their regular employment, but were required to undertake periods of training. Those not attending were, unless “labouring under any Infirmity incapacitating him”, regarded as deserters. Such deserters were required to pay a forfeit of £20 immediately or “be committed to the Common Gaol, there to remain, without Bail or Mainprize, for the Space of Six Months” or until such time as they paid the sum forfeited.

So it was that James Atcherley combined military service with his career as a jeweller and cutler. He did not do so for long however. As we have seen, in July 1809 James left his home without informing his family or friends. He was still missing a month later, prompting the notice which was published not only in the Chester Chronicle on 11 August, but also in The Times of 18 August. The notice concluded:

It would appear that, eventually, James did make contact. The career he had pursued in Shrewsbury was over though. The Salopian Journal of 14 February 1810 carried the following notice:

THE Creditors of Mr. JAMES ATCHERLEY, late of Princess-street, Shrewsbury, Jeweller and Cutler, may receive their Debts on applying to Mr. WILLIAM ATCHERLEY, Ironmonger, or Mr. ASTERLEY, solicitor, in Shrewsbury aforesaid ; and all persons who stand indebted to the said James Atcherley, are requested to pay such Debts immediately to Mr. ATCHERLEY, or they will be proceeded against for the Recovery thereof.
Shrewsbury, Feb. 8, 1810.

The reason for James’s mysterious disappearance is unclear. It seems obvious that he did not wish to continue running his business, but he could have ceased trading without ‘running away from home.’ The pressures which may have driven James away from Shrewsbury – or the attraction that may have lured him elsewhere – will likely always be a matter for speculation.

And while we are speculating, why did James leave the Shropshire Centre Regiment of Local Militia and then join the Worcestershire Regiment of Militia in 1810? His Commission as an Ensign in the latter regiment was signed on 17 April. It may be that James wanted to be a full time rather than a part time soldier, as the Worcestershire Militia was a Regular rather than a Local unit. He may also have desired a change of scenery. As the regiment was then based at Portsea Barracks in Hampshire, that is exactly what he got.

The Worcestershire Regiment of Militia had been based at Portsea Barracks since at least the beginning of 1810, but on 26 May that year all ten companies moved to Four House Barracks in St Nicholas Street, Portsmouth. Then on 8 October the regiment marched to Portchester (then known as Porchester), where it did duty guarding the French prisoners of war held at the castle there (see image below). To return to Robert Holden’s account of the Worcestershire Militia: “At this period there were about 47,600 French prisoners in England, while 10,300 English languished in the prisons of France.” 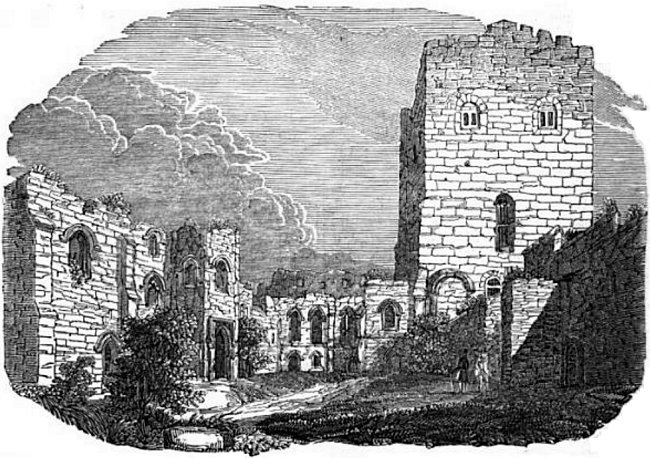 The regiment was still at Portchester in May 1811, when a number of the prisoners attempted to escape. Six managed to scale the castle walls, but three of those were captured in the act and the other three were recaptured soon afterwards.

By this time James Atcherley was a Lieutenant, having been promoted to that rank on 23 July 1811 (oddly, the London Gazette recorded this event as taking place two years later). He was also a married man, his wedding to Mary Dixon taking place at the church of St Lucia in the bride’s home parish of Upton Magna, Shropshire on 7 November 1811. It seems that James had finally settled, albeit into a way of life which meant he was regularly on the move. There would be no more mysterious disappearances, but there would be a long and at times eventful military career. 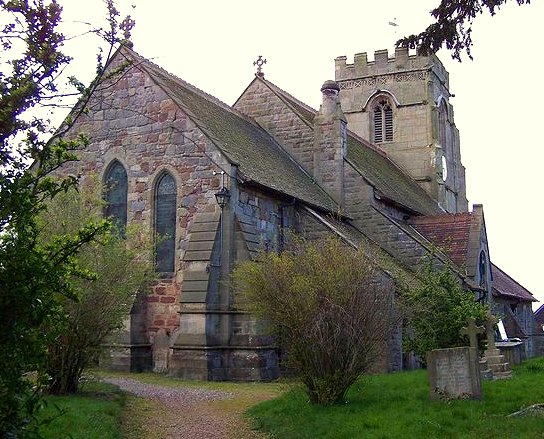 The church of St Lucia, Upton Magna. Click on the image to view at Geograph.

> On to Lieutenant James Atcherley and the War of the Sixth Coalition.

Picture credits. Extract from London Gazette, issue 16268, 20 Jun 1809, page 909 used under the Open Government Licence v2.0. Portchester Castle: image from The Graphic and Historical Illustrator, volume I, page 260, published 1834 and therefore out of copyright. The church of St Lucia, Upton Magna: photo © Copyright Geoff Pick, taken from Geograph and adapted, used and made available for re-use under a Creative Commons licence.