The eighteenth century has been described by one author as “a great age of pamphleteering”, with the subjects of those pamphlets “legion”, their authors “innumerable”, and “[every] question of substance – and many of none – [attracting] writers” to an extraordinary degree. Alongside the proliferation of pamphlets came a boom in books, particularly in the second half of the 1700s. This created, in the words of another author, “a flood of reading matter”, which “became too expensive for all but the most dedicated and wealthy book buyer to purchase for himself.” One solution to this problem for those whose eyes were bigger than their own bookcases was provided by local book clubs or societies – like the Ely Pamphlet Club, of which the Rev Thomas Atcherley was a founding member.

I wrote about Thomas Atcherley (along with his brother John, his sister Mary and her descendants, his father Thomas, and in particular his mother Elizabeth) in Mother, grandmother and guardian: Elizabeth Atcherley, née Gittins. Thomas’s part in that story ended with his admission to Peterhouse College, Cambridge, on 2 November 1747 (at the age of 19), which led to his subsequent career in the church.

Thomas was ordained as a deacon, at Ely in Cambridgeshire, 17 June 1753, at which point he was described as a Student in Civil Law and curate at Chatteris (a village some 10 miles to the northwest of Ely; he was officially licensed as curate there two days later). He did not however go on to be ordained as a priest. In his book Inferior Office? A History of Deacons in the Church of England, Francis Young noted that there was a strong case for clergymen from the gentry or aristocracy to remain as deacons. This was because they were likely to inherit estates and so would not need to hold a benefice to earn a living.

In addition, “Canon Law forbade priests from engaging in large-scale farming or commercial activity and, although dispensations from these canons could be obtained, it was easier to remain in deacon’s orders after inheriting an estate.” Thomas Atcherley had in fact already inherited his late father’s “purchased Estate” in 1745. Of the other three Atcherley clergymen, Thomas’s contemporary James (1730-1804) and James’s sons Roger and John, James and John were both ordained as priests while Roger remained a deacon.

On 20 March 1754, Thomas Atcherley married Ann King at Downham in Cambridgeshire, by means of a licence obtained the previous day. Ann’s age at death indicates that she was born about 1734, which suggests that she was probably the Ann King, daughter of Henry and Mary, who was baptised at Burwell (again in Cambridgeshire) on 25 Dec 1733. A little over a fortnight after his wedding, “Mr. Atcherley, of Peter-House-College” was admitted to the degree of Bachelor of Law on 5 April 1754.

Thomas was formally appointed as curate of West Felton on 20 Dec 1756. However, he had already been serving the parish in that capacity for at least 18 months. He had in fact, on 25 June 1754, conducted the first wedding at West Felton to be entered in the new-style marriage register which was introduced that year. He went on to perform five of the next seven marriage at the parish church, before undertaking the very special duty of joining together in holy matrimony his sister Mary Atcherley, and Richard Downes, on 11 June 1756. Thomas’s wife Ann, sister-in-law of the bride, signed the entry in the register as a witness.

The next two register entries, as with all the previous entries under his name, were signed by Thomas as Curate. He did not specify his position when the next marriage was recorded (on 21 February 1757), but from 1 August 1757 he signed as Minister (abbreviated to “Minr.”). Thomas performed all but three of the next 36 weddings at West Felton, tying his final knot there on 21 May 1764 (the next nuptials to take place were on 21 December that year). During that time his wife Ann signed as a witness once more when Daniel Griffiths of Oswestry, Gent, and Sarah Lloyd were wed on 18 April 1762, and Thomas himself acted as a witness to the marriage conducted by the Reverend Radenhurst on 3 May 1763. 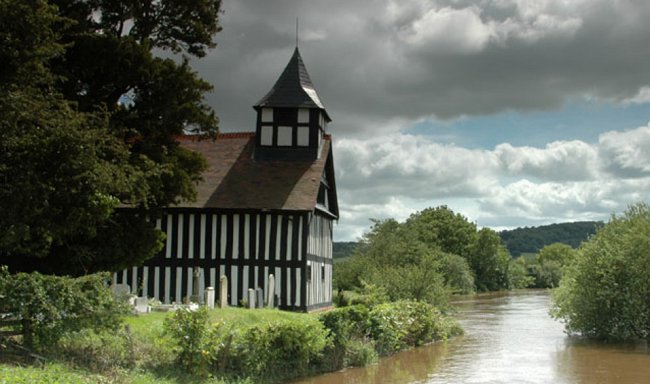 While he was curate, and minister, at West Felton, Thomas also conducted marriages (and quite possibly other services too) in at least two other Shropshire parishes. He carried out four consecutive marriage ceremonies at Ruyton XI Towns from 14 September 1759 to 19 February 1760, plus one more on 20 October 1761, and a wedding at Melverley on 17 May 1761 (the beautiful 12th centry Melverley St Peter is pictured above). His own marriage, meanwhile, was blessed by the birth of a daughter, named after her mother. “Anne the Daughter of Revd Tho Atcherly & Anne his Wife” was baptised at Ruyton XI Towns on 29 June 1758, with the following entry then being made in the West Felton Felton register: “June 29th 1758 Ann Dar. of the Revd. Mr. Atcherley of West Felton and Ann his Wife She was Christened at Ryton and is entered in the Register at Ryton”.

Another interesting record relating to his clerical duties at West Felton is the schedule of penance which “Thos Atcherley Minr” signed on 22 May 1759. This required William Phillips to perform penance in respect of his defamation of Mary, wife of Thomas Gittins – the latter quite possibly being a maternal relative of Thomas’s!

Early evidence of Thomas’s love of the printed word comes in the form of his subscription to Publii Virgilii Maronis Bucolica, Georgica, et Aenis by John Baskerville, which was published in 1757. The book, as the title might suggest, was written entirely in Latin. According to a page now lost from the University of Reading website, “In 17th and 18th century England the Aeneid was widely regarded as the greatest of the classical epic poems.” The parallels which were drawn between the Roman Emperor Augustus (whose rule Aenis was believed to embody) and the British monarchy, led to a great interest in (and many new publications of) the Aeneid and of other works by Virgil during this period. If, some years later, Thomas thought he might get to read more material of this type through membership of the Ely Pamphlet Club, he was to be disappointed.

The move of Thomas Atcherley and his family to Ely, in Cambridgeshire, took place as a result of his election and installation as one of the minor canons of Ely Cathedral on 25 November 1764, replacing the Rev Thomas Ellis. Thomas and his fellow minor canons (he was one of five) would have taken responsibility for worship delegated to them by the dean of the cathedral. They would also have sung alongside “The Lay Clarks or Singing Men” in the choir. (An interior view of Ely Cathedral is shown here.) To supplement his stipend Thomas was also given the perpetual Cure of Stretham and Little Thetford, about 4 miles south of Ely.

The Ely Pamphlet Club was established a little over a year after Thomas Atcherley’s arrival in the town – he was one of twelve men who, on 9 January 1766, assembled for this purpose at the Red Lion inn. The rules agreed at that meeting decreed that there were to be no more than 12 members, each of whom were to pay 2s. 6d per quarter to the Steward. That officer, elected by the members from within their own ranks, would take charge, and keep a register, of the club’s books. The club was to meet every second Thursday at the Red Lion between 6pm and 8pm, for the purpose of agreeing which books to purchase and to hold ballots to determine who would borrow what. At the end of the year the books held by the club would be sold to its members. The first Steward of the club was none other than the Rev Thomas Atcherley.

In his book The Pleasures of the Imagination: English Culture in the Eighteenth Century, John Brewer stated:

The book club was a phenomenon of small towns and large villages; it brought together the local elite of professional men, merchants, affluent farmers and minor gentry in the convivial environment of the local inn or tavern, where together they chose the club’s acquisitions, debated the issue of the day and last, but by no means least, ate and drank. The books they bought were overwhelmingly controversial and topical, pamphlets and slim volumes on politics and religion. […] A few clubs also bought more substantial volumes [but] most annual purchases – in the Ely Pamphlet Club this meant about sixty titles a year – came from the monthly survey lists of current works on politics and religion included in the back of each issue of the Critical Review and the Monthly Review.

Some book clubs (but not that of Ely as far as I know) not only bought books once published, but also subscribed to them in advance of publication. For example, five book clubs in Eastern England (at Caxton, Kimbolton, Huntingdon, St Ives and Thrapston) subscribed to The Christiad, a Poem in Six Books, translated from the Latin of Marcus Hieronymous Vida by John Cranwell and published at Cambridge in 1768.

The availability of other options for those who lacked the means to buy outright everything they wished to read depended on how much money they had, and where they lived. Poorer readers almost anywhere could (and often did) hire a paper from a local newspaper hawker, or pool their resources to buy newspapers or pamphlets which they would share. Parish and cathedral libraries, stocked with newspapers, periodicals, pamphlets and books, were present in various locations for the use of parishioners (though presumably not, in Thomas Atcherley’s day, at Ely), with similar collections provided by some nonconformist congregations for their members. Although the printed matter made available from these sources was of course heavily biased towards religious texts, secular works such as dictionaries and histories were also included.

Towns and cities also had coffee houses and clubs where popular reading matter was made available as a means of attracting customers or members. Increasing interest in political matters by those of some affluence (many of whom wished also to exert some influence) was well catered for at these places. An example from eastern England is Johnson’s Coffee-house, “in the Market-Place, Norwich”, which in 1778 had its own Pamphlet Society. 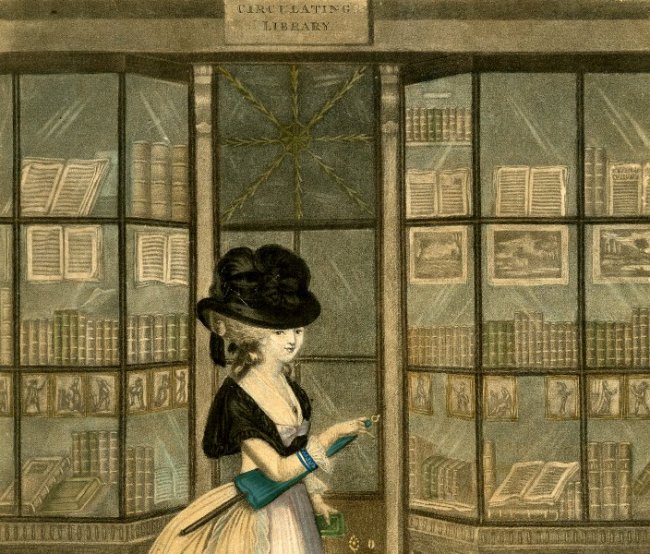 Beauty in Search of Knowledge (at a circulating library) – 1782

From the mid-1700s an increasing number of subscription or circulating libraries were established in the larger towns and cities, which had populations large enough to make such institutions viable. Few such libraries had existed before 1740. Exceptions included various reading rooms in London and, in that part of eastern England which Thomas Atcherley would later inhabit, bookseller George Barton (who had shops at Huntingdon, Peterborough, St Ives and St Neots) offered not only “All sorts of bound Books New and Old, at reasonable rates” but also “Plays, or any other Books to let out to Read by the Week”. However it has been estimated that by 1800, 112 circulating libraries had been set up in London and a further 268 in the provinces. 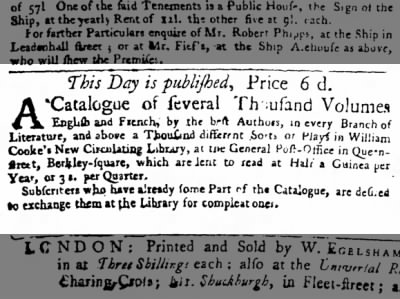 Ely was evidently too small to support a circulating library – even by 1801 the combined population of St Mary’s, Holy Trinity and the College was only 3,775 (of which 1,044 were employed in agriculture, trade, manufacture or handicrafts). Hence the town’s pamphlet club, with which the Rev Thomas Atcherley had an important – if rather brief – association.

Picture credits. Ely Cathedral and Ely Cathedral interior: Both adapted from illustrations in Winkles’s Architectural and Picturesque Illustrations of the Cathedral Churches of England and Wales, published in 1838 and therefore out of copyright. Melverley St Peter: Photo by John Horton, taken from his Flickr photostream and adapted and used under the terms of a Creative Commons licence.Beauty in search of knowledge (at a circulating library) – 1782: Original image © The Trustees of the British Museum, museum number 2001,0930.33; adapted and used under a Creative Commons licence. William Cooke’s New Circulating Library, London (advertisement): From The Public Advertiser (London), 27 March 1758, page 4, at Newspapers.com.