] (better known as Tony) recalled his wartime service after receiving an honour from the French Government. The decoration he was awarded, for the part he played in the liberation of France during WW2, was the highest the nation could bestow – the Légion d’Honneur. This accolade was presented to Tony “in recognition of his service as a wireless operator in the Royal Corps of Signals, attached to HQ 2nd Battalion of the Gloucester Regiment.” Tony’s first foray into France had taken place on one of the most crucial days of the war: 6 June 1944 – D-Day. It was an experience for which he, and most of the men who went into battle alongside him, were incredibly ill-prepared.

Tony joined the army in 1943 and, as we have just seen, as part of the Royal Corps of Signals he served with 2 Battalion Gloucester Regiment. This Battalion became part of a new Brigade which was formed to support the Normandy Campaign, the 56th (Independent) Infantry Brigade. To illustrate the challenges which faced this new Brigade, I can do no better than to quote from Andrew Holborn’s PhD thesis of 2009 on The role of 56th (Independent) Infantry Brigade during the Normandy Campaign June-September 1944 (which formed the basis for The 56th Infantry Brigade and D-Day, published in 2010):

The Brigade was only formed as a new brigade in March 1944. This gave it little time for the three battalions to get used to working with each other and to train for their expected tasks on D-Day and after. Next it was made up of three regular battalions [which] had been ‘Home Service’ battalions since 1940 and had not, prior to February 1944, expected to have an important part in the coming invasion. They were under strength as they had been used in the previous three years as reinforcement units based in the UK. […] Of the four Infantry Brigades that landed on Gold Beach on D-Day, it alone was not already tried in battle. […] The training of the Brigade in the three months prior to D-Day was not always specific to task. Its late addition to the D-Day order of battle meant that it had to follow a steep learning curve.

The other two Battalions of which the 56th Brigade was comprised were 2 Battalion South Wales Borderers and 2 Battalion Essex Regiment. These Battalions were by 1944 (to quote Andrew Holborn again) “a mix of regular soldiers and conscripts of all ages. Some were recuperating from wounds or disease caused on active service in Italy or Burma, while others were considered too old to stand up to the rigours of combat. It meant that replacements were joining the brigade to bring the battalions up to full strength very nearly to the day of embarkation for France.”

As that fateful day drew near, on 24 May 1944 the battalions of the 56th Brigade (the badge of which is shown here) were ‘sealed’ in their camps in the New Forest in Hampshire. There were camps like these (known as ‘sausages’ because of their elongated shapes!) all across southern England, close to the coast. For the lower ranks, there was no communication with the outside world – access to mail, telephone and cable was denied. Only in the event of an emergency could telegrams be sent, and then only with the permission of a Commanding Officer. Finally, on 3 June, the troops learned where they would be going. The movement of men and equipment began that evening, with the Rifle Companies and supporting personnel travelling by lorry to Lymington and from there, by landing craft, to Southampton docks.

In an interview with Andrew Holborn, given in 2006, Tony Atcherley shared his memories of that time:

I wrote what might have been my last letter to my mother, which started “By the time you read this I shall be in France”. We knew that this batch of mail would be held back and from now on our mail would be censored. On 4th June we drove the short distance to the harbour and embarked. We embarked on quite a small landing craft; it had enough room for a number of vehicles. On board we reported to a lieutenant of the Glosters a quiet thoughtful man who did all he could to keep us all calm and cheerful, except on one occasion when he forlornly reflected it was a Sunday and people would be out in London in Kew Gardens enjoying themselves. With a genuine beach assault map he now showed us that we were to land in Normandy between the villages of Le Hamel and La Riviere about eight miles north east of Bayeux which we were to take. Of course we knew all about the famous tapestry from schooldays and now Operation Overlord was to put William’s conquest into reverse.

(Interestingly the Bayeux Memorial – pictured below – which was erected by the British to commemorate over 1,800 Commonwealth casualties of WW2, features the Latin inscription “Nos a gulielmo victi victoris patriam liberavimus” – “We, once conquered by William, have now set free the Conqueror’s native land”. The names on the memorial include 171 from the Gloucestershire Regiment.)

The sheer scale of the operation Tony was involved in would have become very clear when he reached the coast and embarked upon his landing craft. The waters were thick with ships small and large, sections of Mulberry harbour, and equipment for Operation PLUTO (the aim of which was to lay an oil pipeline under the Channel from the Isle of Wight to Cherbourg).

Amidst all this activity, there was also singing. Tony would I am sure have heard the voices of his fellow servicemen of the 56th Brigade belonging to the South Wales Borderers. Singing before a battle was a tradition of that Battalion, and with battle expected the following day an informal concert took place aboard the ship on which many of their number were to sail. One witness recalled: “The soloist sang from the bridge while the audience in the shadows of the deck took up the choruses. The songs echoed across the water and troops on other craft, less happy in their land of birth, leant against the nearest rails, silently listening.”

D-Day was originally planned to take place on 5 June 1944, but poor weather meant that it was delayed until the 6th. Those who had embarked on ships for the Channel crossing were allowed to return to shore where newspapers, writing paper for letters home, sandwiches and of course tea were all made available. Those on landing craft however remained in the Solent. I suspect Tony was among their number.

Finally, at around 19:15 hours on the evening of 5 June, the invasion got under way as ships, landing craft and other vessels left the harbour. Once out into the Channel proper, the choppy waters meant that a rough night was in store. Some were unaffected by this, while others suffered badly with seasickness. Even if Tony was not one of those so afflicted, being in close quarters with others who were would naturally have been rather unpleasant!

Anthony Beevor, in his 2009 book D-Day: The Battle for Normandy (which is as brilliant as the reviews of the work suggest), opened chapter six – The Armada Crosses – with the following words:

As those who set forth in the convoys of warships and landing craft looked over Southampton Water on the evening of 5 June, the invasion fleet seemed to stretch to the horizon. Many wondered what the Germans would think when they caught sight of this armada, by far the largest fleet that had ever put to sea. Nearly 5,000 landing ships and assault craft were escorted by six battleships, four monitors, twenty-three cruisers, 104 destroyers and 152 escort vessels, as well as the 277 minesweepers clearing the channels ahead. 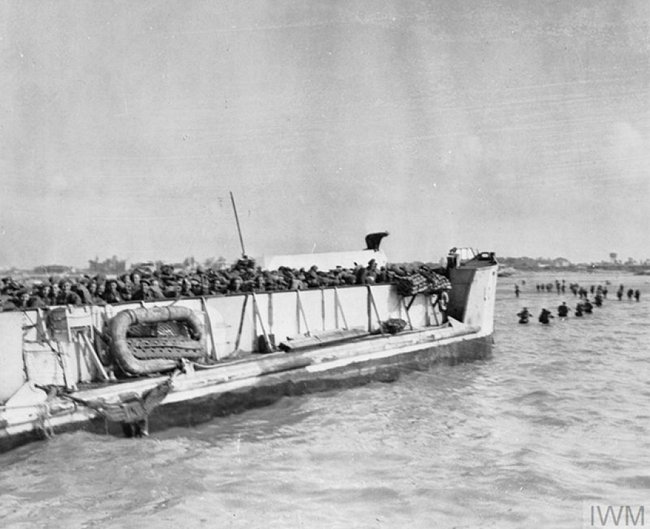 By daybreak, the coast of Normandy was within reach. The sound of aircraft flying overhead was constant, a din which was added to by the ongoing bombardment of the coast by the allied naval vessels and rocket ships. One soldier who, like Tony Atcherley, landed with the 56th Brigade at Gold Beach, later recalled that the coast “was wreathed in smoke and dust.” Some of the smaller landing craft were already making their way to the shore, while Field Artillery Regiments were firing from their vessels. The Infantry Battalion’s 4.2 inch mortars were being fired too. “These last two were good for morale but probably quite inaccurate due to the bucking waves.”

The ship-borne bombardments, and the bombing raids carried out by air support, were also quite literally ‘hit and miss’, the airborne bombing being particularly hampered by low cloud cover. The destruction of German defences was therefore not as thorough as it might otherwise have been. Intelligence regarding the strength and position of the German forces in Normandy was itself incomplete, and this added to the difficulty of the landings and in particular the subsequent push inland – in many places much fiercer resistance than anticipated was met with.

The state of the sea was another problem – rougher conditions than were ideal prevailed, and the tide was higher than anticipated. Adding to all of this was the fact that anti-invasion obstacles, including mines fixed to posts, were “considerably thicker and heavier” than expected. Many landings were therefore later than intended, further away from where planned – and extremely treacherous. Men and machines were disgorged from their landing craft in deeper water, and under heavier fire from German forces, than had been bargained for. Tony Atcherley, and those who reached the beach alongside him, literally went through hell and high water to get there.

The 2nd Glosters were tasked with taking the centre of Bayeux before moving south and west, but on D-Day itself they stopped short of the town, unaware that it had in fact been almost completely deserted by German forces. Reaching nearby Magny-en-Bessin a little before midnight, the Glosters ‘dug in’ around the church (pictured right). The night did not pass without incident, and Tony Atcherley would have reason to thank armour plating for the fact that the 19th anniversary of his birth, on 7 June, was not his last. To quote again from Andrew Holborn’s thesis:

As with the other battalions the night was spent dug in, a genuine expectation was a major counter-attack and clearly there could be German troops anywhere. Some German soldiers were lying quietly among them. As Private Duffin came back to his Company after a few hours spent in a forward position, four Germans – a whole Spandau team – jumped out of a hedge with their hands up. Next a sniper in the Church tower fired on the men below. Some of his bullets disturbed Tony Atcherley in the Brigade ACV signals truck as he was contemplating his 19th birthday. Luckily the armoured sides of the vehicle protected Atcherley. Frank Rosier on the orders of Lt Nordbruck opened fire with a Bren gun on the church tower, a tank trained its gun on the tower and the sniper eventually gave up. The bullet splashes on the church tower can still be seen.