Today I am looking forward to this year’s “Who Do You Think You Are? Live” (which gets underway tomorrow) by looking back at my visit to the show in 2015. I shared some of my observations on last year’s event in my article Who Do You Think You Are? Live, 2015, but never did manage to post any further instalments. I shall now repair that omission, and make the past the prologue for the 3-day family history festival that is about to kick off at the National Exhibition Centre.

In my article last April, I covered the celebrities and some of the companies who attended WDYTYA? Live 2015. There were of course many more vendors in attendance than the few I described: DNA testing companies (including Family Tree DNA), UK family history magazines, software providers (Family Historian, for example), online databases (such as The Genealogist and Forces War Records), plus retailers of books, storage solutions and other genealogical goodies. I tried not to get too carried away with my spending, and was reasonably successful, the photo below showing what I described at the time as ‘The Birmingham Hoard’.

I will certainly be casting my eye over the cornucopia of commercial offerings at WDYTYA? Live 2016. I have a few things I would like to acquire (archival quality photo storage solutions for example), and who knows what else might take my fancy on the day? As for celebrities, well, what a disappointment the 2016 show is! There is only one genuine ‘Celebrity Theatre’ featuring a star from the TV programme. On the plus side that one star is Anita Rani so I will get my Strictly fix along with my WDYTYA? celebrity experience. 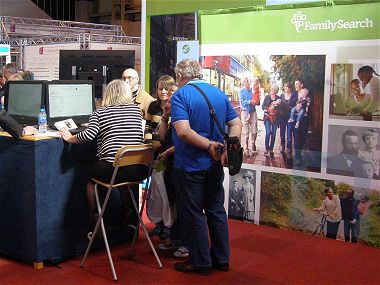 Organisations of all kinds and sizes attend WDYTYA? Live, from small societies to genealogy giants. I will categorise them as government bodies, societies, and, in a league of its own, the family history phenomenon that is FamilySearch (stand pictured right). We are all familiar with their websites, and in some cases with their publications and/or their sales catalogues. WDYTYA? Live provides an opportunity to talk to (and pick the brains of) the people who make the organisations tick, and to cast an eye over their offerings first hand. 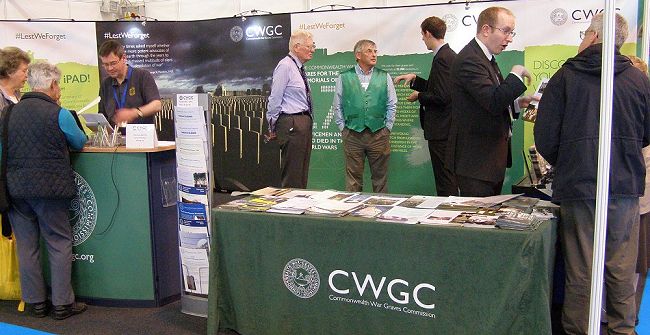 Among the government bodies with a presence at the show last year were the UK National Archives (TNA), the Imperial War Museums (IWM) and the Commonwealth War Graves Commission (CWGC, pictured above). 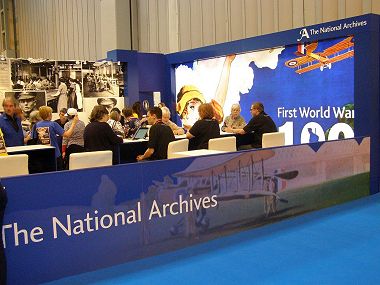 The military focus for the last two in that list is of course obligatory, but TNA (stand pictured left) had a similar focus with its First World War 100 displays and presentations.

One government department had a stand staffed by people who were there to pick our brains. The time is approaching when post-WW1 (including WW2) military personnel records held by the Ministry of Defence will no longer be retained by them. The logical custodian for these records is of course TNA, but this body has made it clear that it does not have the capacity to take on such a large volume of files. The obvious solution to this problem is digitisation, but that comes at a cost. How would that cost be met, and in the event of complete digitisation not being feasible, what records would users, such as family historians, prioritise for saving? (For an update on this, see Chris Patton’s blog post Proposals on access to post-WW1 military service personnel records.) 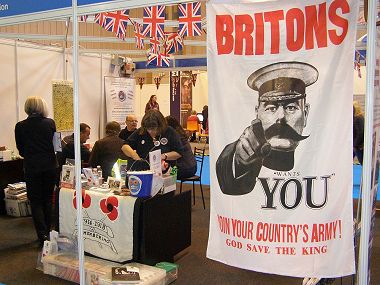 Government bodies were not the only organisations with stands focussing on military history and records. Among the many societies at WDYTYA? Live 2015 was the Western Front Association (stand pictured right), which has an archive of 6.5 million WW1 soldiers’ pension record cards.

Manual look-ups of these cards can be performed, for a fee, with scans sent to enquirers. In the longer term, the WFA hopes to digitise the entire collection and make them available online. 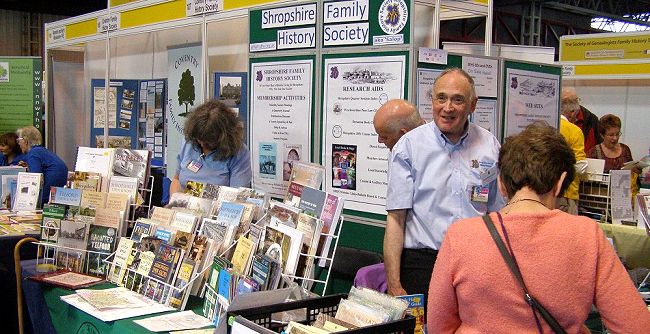 Family History Societies from the length and breadth of the UK (and beyond) populated much of the far end of the show’s exhibition hall last year. With many of these societies shrinking in size (a problem faced by many small voluntary organisations), the annual genealogical 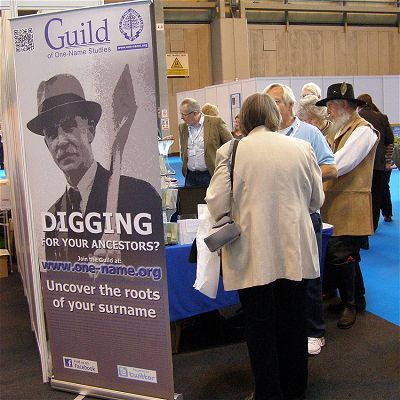 jamboree that is WDYTYA? Live provides a valuable opportunity to sell their wares and, vitally, recruit new members. I was one of the new (actually, returning) members who joined the Shropshire Family History Society (stand pictured above) at the 2015 show.

One society which is bucking the trend of declining membership is the Guild of One-Name Studies (known affectionately by many as the GOONS). The Guild (stand pictured left) had a very successful show in 2015, and hopes to repeat (or better) that performance in 2016, with a new display which was first used at Roots Tech in Salt Lake City earlier this year. I’m looking forward to seeing that, along with all the other society stands.

One of the great things about WDYTYA? Live is the unrivalled opportunity it presents (in the UK at least) to see, listen to, and speak with so many fellow genealogists, many of whom have previously been known only online. Some speak at lectures provided as part of the show’s main programme (sadly, charges have been introduced for these lectures this year, no longer is it 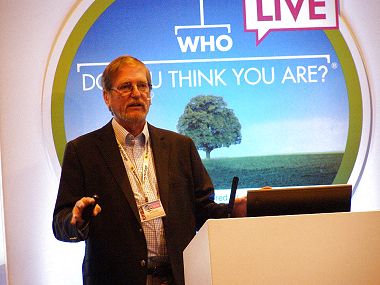 possible to get free tickets for them on the day – a black mark for the event organisers there). At WDYTYA? Live 2015, for example, genealogy godfather Dick Eastman (pictured right) presented a tech-orientated talk entitled Cloudy With a Chance of Genealogy. (Chatting to Dick towards the end of the show, I discovered that he and I are both members of a very exclusive club – vegan genealogists!) Other top-drawer genealogists talk at stands or in theatres operated by (or in association with) the companies and organisations. This year, I hope to attend some of the many free DNA presentations on offer at the DNA Workshop Theatre.

More rock stars of the genealogy world can be found staffing some of the stands for societies at the show, or providing free advice on behalf of the Society of Genealogists in their ‘Ask the 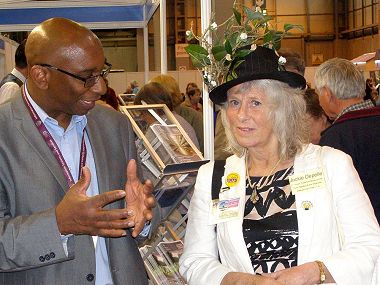 Experts’ area. No show is complete without seeing Jackie Depelle and ‘the hat’; the topper for 2015 can be seen in the picture to the left. And of course there are many ‘ordinary’ genies like myself who are also there as paying punters – I shall be tweeting my whereabouts from time to time (and watching the tweets of others) so that some of my fellow family historians can meet me (or indeed avoid me!) should they wish. A guaranteed forum for the fraternisation of family historians is the ‘tweet-up’ (a meet-up for those who tweet). Two tweet-ups have been planned this year, on Thursday (15:15 to 16:15) and Friday 15:30 to 16:30), in the courtyard outside (weather permitting).

I can’t leave this review of WDYTYA? Live 2015 and preview of the 2016 show without commenting on some of the things I reported on in my article of last April. At the Findmypast stand last year, lots of great things were promised as being ‘in the works’. Sadly, one year on, a number of them have still not happened. I am particularly disappointed that improved search facilities for the British Newspapers collection have not materialised. Additions to the countries of the world for which records are available are also conspicuous by their absence. On the plus side, I think all the record sets promised for 2015 did find their way onto the site – and many of them have been treasure troves of information.

Well, it is now WDYTYA? Live eve. I need to check train times, make sure my rucksack is packed appropriately, check that my tablet and phone are charged, scribble down what I want to do tomorrow, and take another look at Jane Roberts’ Family History Fair Tips for Beginners to make sure I haven’t missed anything!