One of my 10 Genealogy Goals for 2015 was to attend the “Who Do You Think You Are? Live” show, held at Birmingham’s National Exhibition Centre from Thursday 16 to Saturday 18 April. That goal has now been achieved – I attended all three days and immersed myself in the full WDYTYA? experience!

Note that larger versions of all the photos in my report below can viewed by clicking on them.

It is the celebrities who draw so many people to watch WDYTYA? on TV, and they are not missing from WDYTYA? Live. Each day of the show features one of the stars fromWDYTYA? in conversation with Sarah Williams, editor of the WDYTYA? magazine, the chat being interspersed with clips from the TV programme.

This series of talks kicked off with DJ Reggie Yates, whose exploration of his mixed English and Ghanaian heritage was one of my favourite episodes of 2014. A memorable part of the programme was when Reggie met tribal chief Nana Kobina Nketsia V. Reggie first had to speak to the chief’s spokesperson. Although that spokesperson was dressed in the customary robes and spoke the local language, Reggie revealed during his talk that the man had actually been living in the USA for some 30 years. When filming stopped, the spokesperson went over to Reggie and said “Yo, my man!” before chatting to him about the hip hop music scene! 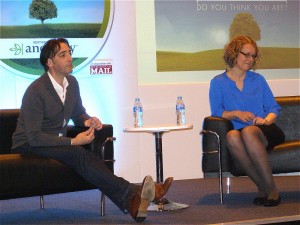 Friday’s special guest was impressionist Alistair McGowan (pictured left with Sarah Williams), who was featured on the TV show back in 2009.

Alistair knew all about his maternal ancestors, a long line of Worcestershire farmers, but the mystery of his father’s ‘Anglo Indian’ roots was the story he and the production team wanted to follow. And what a story it turned out to be.

Talking about his experience and how it had affected him, Alistair said that after the TV programme aired he told someone he felt as though his whole right side had come alive – and that when he later asked his sister what she thought, she came out with exactly the same expression. We got an impression too, when Alistair mimicked his 24 Hours in the Past co-star Colin Jackson! “I’m just showing off now,” he said afterwards. 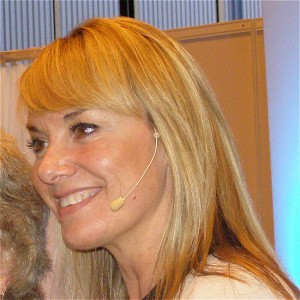 Saturday’s star was actor Tamzin Outhwaite, of Eastenders and New Tricks fame. We got to hear a lot more about the Italian influences on Tamzin’s upbringing: Christmas dinner for example consisted of seven courses, starting with antipasto.

We also learned that, although we didn’t see it on the TV programme, Tamzin did get to meet relatives – lots of them! –  when she travelled to Italy to find out more about her ancestors there. None of them spoke English however, and even with the help of an interpreter it was difficult to establish exactly how Tamzin was related to the people she met.

Tamzin herself was lovely, she didn’t disappear immediately after her talk but stayed a while so that fans could grab autographs or photos. In most cases Tamzin offered to be pictured with the would-be photographers, then took the phone or tablet and snapped a celebrity selfie! 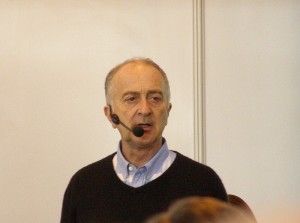 Another well-known TV personality at WDYTYA? Live was Sir Tony Robinson, who attended on all three days on behalf of a certain large genealogy company….

Commercial vendors of genealogy products and services dominate the front section of the hall at WDYTYA Live, and none more so than show sponsor Ancestry. which had a huge stand facing attendees as they entered. As usual, Ancestry had set up computers providing free access their many records, with staff on hand to provide assistance. A substantial discount on the cost of an annual Ancestry subscription is also on offer and after years of paying monthly to spread the cost of my World membership, I signed up and saved a small fortune! 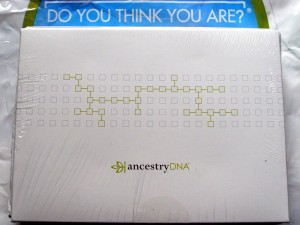 The big push from Ancestry this year was for their AncestryDNA product, which has only recently launched in the UK. This was the subject of Tony Robinson’s talks, at which he was joined by Ancestry’s Catherine Ball and Brad Argent. As I tweeted at the time, “The word ‘spit ‘ is being used a lot. There is a secure spit repository. No, really.” In a nutshell, spit in a tube, send it to Ancestry, and they will unravel the secrets of your DNA. Those secrets include estimates of your ethnicity and, hopefully, genetic matches with others who have taken the test and who share one or more ancestors with you. Those matches, over time, should increase as more saliva samples get the Ancestry treatment. “Please stay excited about this,” said Sir Tony at the end of his presentation. His cunning plan worked – after a chat with Brian at the Ancestry stand I came away from WDYTYA Live on Friday with an AncestryDNA kit of my own. I’ll keep you posted on developments – particularly any which tie in with my Atcherley ancestry! 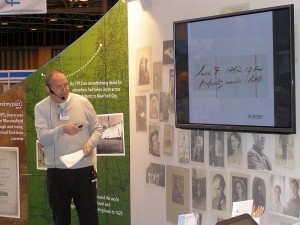 Another major vendor with a presence at WDYTYA Live was Findmypast. They too provided free access to their records via computers on their main stand, and a discount code for saving money on annual subscriptions. A series of presentations was also given each day on a range of genealogy topics which highlighted FMP’s growing collection of records (videos of these will be added soon to The Findmypast Video Library). My picture shows Dave Annal talking about civil registration in Britain and why ancestors may be missing – or appear to be missing – from BMD records. Another presentation, by Debra Chatfield, looked at records added since the previous WDYTYA Live (290 million of them, with 90 million images, in 400 record sets) and what is coming up. Here is a summary of some of what I gleaned from Debra and from a conversation with FMP’s Myko Clelland (a.k.a. The Dapper Historian).

There are 21 different digitisation / transcription projects on the go at present. Some of these projects, due to the sheer volume of records involved, can take several years to complete (Staffordshire parish registers, for example, are still being digitised and transcribed and will eventually join those scanned from microfilm and released in 2014). Fans of the school registers which have been added to FMP will be pleased to know that the next batch is due online around September 2015. The release of trade union registers last year however 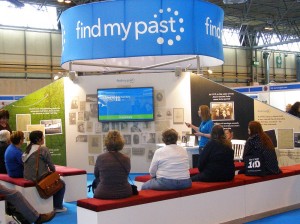 was very much a pilot – FMP is monitoring the usage of those records to see whether further additions can be justified.

Another major project which take some time to complete is the digitisation of Prisoner of War records held at The National Archives. These extend from the Jacobite Rebellion, through the Boer Wars and World War One, up to World War Two (including Stalag Luft RAF and Far East POWs). More releases from TNA’s crime, prisons and punishment records, spanning 1782 to 1857, are also in the pipeline and will include prison registers, petitions for clemency, and returns from criminal lunatic asylums. The British Library’s collection of electoral registers (which occupies 2.5 miles of shelving!) is slated for release this year. The registers start from 1832 and although the date to which those put online will run to has yet to be agreed, it looks like they will extend well beyond WW1.

In addition, there are more parish records on the way (I believe I heard Leicestershire mentioned, and Yorkshire is a definite) through partnerships with archives and local family history societies. Quaker (Society of Friends) births, marriages and burials are coming very soon too. And the current selection of countries which can be selected from the drop-down when searching across record sets at FMP is also set to increase as records from places not currently represented are added. All good news for my Atcherley research, and there’s more besides! 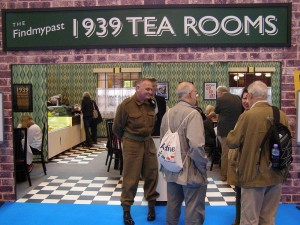 A forthcoming record set which FMP promoted through its 1939 Tea Rooms is the 1939 register, which will fill the gap between the UK’s census of 1921 (to become available in 2022) and the 1951 census. (The census of 1931 was destroyed during WW2 and no census was taken in 1941.) It is hoped that these records (with details of persons either living or likely to be living being redacted) will be online by the end of the year.

Changes to take place at Findmypast go beyond the release of new records, with enhanced website functionality. I was very pleased to learn that FMP’s rather limited search options for British Newspapers 1710-1953 will be upgraded to match those available at the British Newspaper Archives website. (Currently, I often use the BNA site to search, then copy and paste the two lines of text from the result into the ‘What Else?’ box on FMP’s British Newspapers search page.)

Many more developments for FMP Family Trees are also in the works. Hints will gradually be extended to cover more record sets (census record hints went live on the day WDYTYA? Live opened) making it possible to use the family tree to search FMP’s records. The ability to share trees will also be added, with privacy options that allow users to define what they want to be ‘public’ or ‘private’ (rather than having to make that choice for the whole tree). 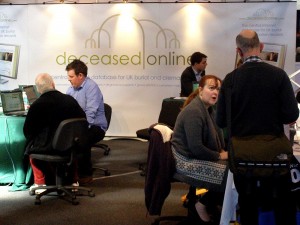 One of the smaller vendors with a stand at WDYTYA? Live, with an ever-growing number of cemetery records, was Deceased Online. The company’s launch of the first tranche of its records from Sandwell in the West Midlands coincided with the show. Records from many more Local Authority areas are on the way too, with some projects well advanced and others at the negotiation stage. We can look forward to seeing burial information from more of the ‘Magnificent Seven’ cemeteries around London, from burial grounds in the Manchester area and more besides. I have already obtained some useful information on Atcherley burials from Deceased Online (see for example Brompton Cemetery on my London MIs page), and I look forward to finding more in the future!

There were of course many other companies and organisation at WDYTYA? Live., not to mention a huge number of fellow genealogists. I will look at some of them at a later date. (See What’s past is prologue – WDYTYA Live, 2015 / 2016.)