All the fun of the family history fair, on the grandest scale, was to be had at the tenth “Who Do You Think You Are? Live” at Birmingham’s NEC from April 7th to 9th. I was there for all three days, which gave me ample opportunity to make the most of what was on offer while sharing the experience through social media. 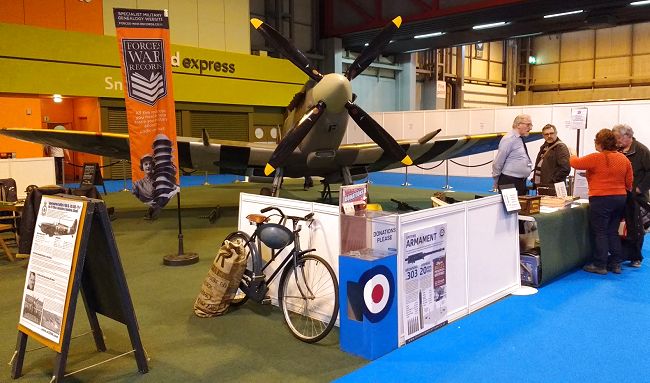 As with a visit to an archive, advance planning helps enormously when going to a show like WDYTYA? Live. Which stands are to be visited, which talks should be attended, and for what purpose? At the same time, some flexibility is also needed, to take advantage of unexpected discoveries. A find which fell into this category came when I realised, late on Day 2, that the General Register Office stand had their post-2005 Birth, Marriage and Death indexes available to view on microfiche.

Post-2005 BMDs for England and Wales are not online, and can only be viewed in a limited number of places, so a return visit to the GRO stand on Day 3 was added to my plans. I already had Atcherley BMD records up to 2011, so I spent a couple of sessions poring over the fiche reader to extract records for the period 2012 to 2015. The fact that there were only 9 Atcherley births in this four year period gives an idea of the small number of Atcherleys around! (I should add that the details I obtained, with the exception of the death records, have joined those which I do not share online, for privacy reasons.)

The GRO stand was in fact the first place I visited on Day 1 of WDYTYA Live. Back in 2015, an Act of Parliament made provision for Regulations to be drawn up allowing the GRO to make historic BMD records available in new ways. Genealogists like myself are naturally keen to see improvements to the current rather antiquated (and expensive) system for buying BMD certificates, so I asked for an update. I as told that progress is being made, and we should hear something ‘soon’ about the GRO’s plans. It seems likely that improved access will take place in stages. Birth and death records have already been digitised under a previous project, so it is likely that these would be made available, perhaps in PDF format, first. The response of users to this development would be crucial in determining whether marriage records then become available in the same way. None of this will happen without Regulations being put in place by Parliament however, and the Minister responsible for the GRO has many other priorities, so I suspect it will be some time yet before we are able to download our certificates online. 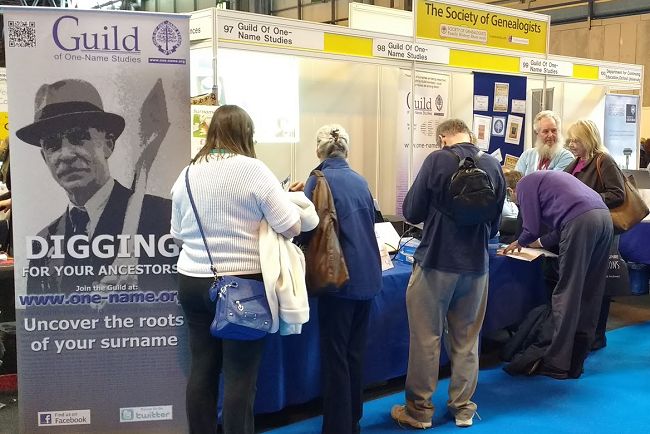 There were, of course, a multitude of other organisations with stands at the show, offering something for everyone on the family history front (and beyond). As ever, family history societies from around the UK (and the Federation of Family History Societies) were present, along with groups covering a wide range of other areas (geographical and otherwise). These included the Huguenot Society, American Ancestors, the Anglo-German FHS, the Guild of One-Name Studies, Families In British India Society (FIBIS), Methodist Heritage, the Caribbean Family History Group and the Jewish Genealogical Society of Great Britain. There were also a number of organisations with no real connection to family history, such as the RSPB, the Woodland Trust and Guide Dogs.

One stand that caught my eye was that of the Canadian Pacific Project. I took a closer look at this as I remembered that Doctor John Atcherley, after leaving Hawaii and moving (via San Francisco) to Vancouver, worked for a while with the Canadian Pacific Railway Company (see Dr John Atcherley’s WW1). On learning that the project is for the restoration of a locomotive named Canadian Pacific I thought I had ‘lucked out’. However I was given a leaflet with information on Canadian-based resources for researching railway ancestors. These include a museum holding personnel records and other documents from companies including, wait for it, the Canadian Pacific Railway! It just goes to show that you never can tell where you will find useful leads – a special “thank you” is due to the Watercress Line.

Elsewhere, there was a plethora of products tempting family historians to part with their cash. While there were no books which I was specifically looking for, I was open to purchasing any which appeared to be both useful and pitched at the right price. Over the course of the show I acquired Cecil Humphery-Smith’s Phillimore Atlas & Index of Parish Registers, Hilary Marshall’s Palaeography for Family and Local Historians, Michelle Higgs’ Servants’ Stories, and Emily Aulicino’s Genetic Genealogy. The last title was the only one not sold at a discount, but I did get it signed by the author, who maintains a Genetic Genealogy blog and who told me to email her if there was anything I didn’t understand. How often do you get that with a book? 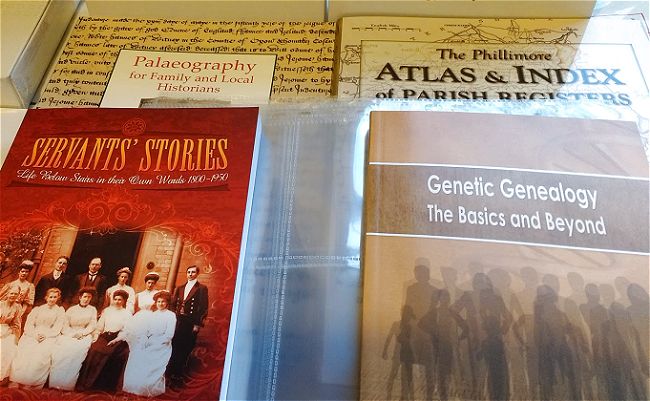 Other resources for genealogists, such as maps, software, family tree charts, printing services, courses, and storage solutions for certificates and photographs, were available from several companies including Maxbal Genealogy, Genealogy Printers, Alan Godfrey Maps, Pharos Tutors, S&N Genealogy Supplies, CAIS, and the University of Strathclyde. The two out-of-copyright Ordnance Survey maps I bought from Quality Maps & More were the result of a chance find. However my purchase of clear, acid-free polypropylene wallets from My History was planned. On using them today to file away the photographs I have obtained through eBay I find that I have no less than 15 showing, or relating to, Richard (a.k.a. Batchy) Atcherley (as well as two featuring his father Llewellyn). I am glad these are now stored more safely. 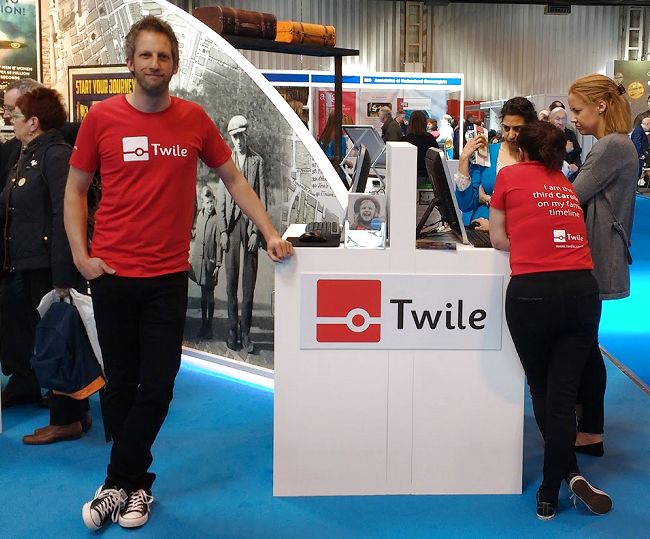 In the field of software, the rise of companies offering new ways to display and share family history and family stories, with an emphasis on capturing the stories of today for the next generation, is interesting. Twile is the centre of much attention at present, particularly after their success at RootsTech earlier this year. They have a product which is constantly evolving in response to user feedback and the company’s own ideas, and they had a good spot on the edge of the Findmypast stand. Other companies at WDYTYA? Live offering products along similar lines were Famicity and Famberry which, as with Twile, provide private online spaces which others can view only by invitation.

Did you spot the Spitfire in the photo at the top of this article? I will tell you a little more about that, and more about some of the other fabulous features of WDYTYA? Live 2016, in Who Do You Think You Are? Live: 2016 (Part 2).